[ Parent Question — What will the economic effects of COVID-19 be? ]

What happens in a recession anyway?

I know the technical definition of a recession- a GDP contraction lasting at least two quarters- but do not have a satisfactory answer as to what happens.

A non-exhaustive list of the kinds of consequences I'm thinking of, sometimes including references, which are intended to be suggestive not definitive:

This paper, the only long-time-scale survey I could find, reports a minor negative correlation between unemployment rates and divorce. However looking at their graph, the relationship is obviously mild. 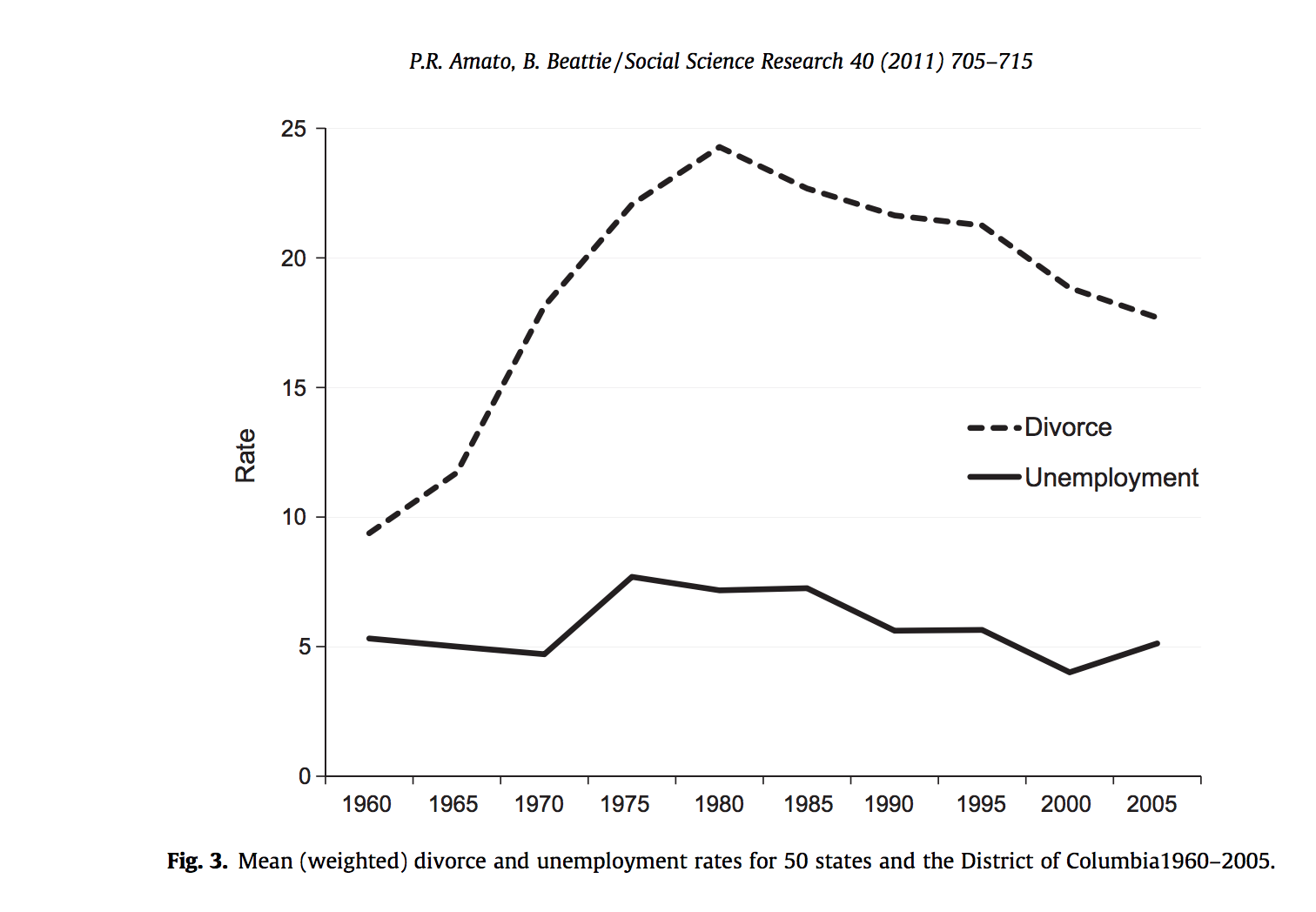 For posterity: I expected there to be a large, detectable drop in divorce rates during recessions and then a spike as soon as the recession ended.

I was really surprised to find a single academic paper in the last 40 years on religiosity and economic conditions, which was not available online. It reports a "strong" countercyclic effect in religious participation in evangelical Protestants but procyclic effect in mainline Protestants, in the 2001 recession. Meanwhile a Pew poll and a Gallup poll show no change in religious participation during the 2008 recession.

For posterity: I'd predicted an increase in attendance.

Note: data is for the United States only

Deaths go down during recessions; according to Ruhm 2002, a 1% decrease in the unemployment rate is associated with an average 0.4% rise in total mortality (about 13,000 deaths, relative to the average of ~2.8m). This is counterintuitive, because wealth is associated with longevity (e.g. Chetty et al. 2016) . There were a lot of potential explanations for this centering on how work was dangerous and didn’t leave time for health, but it turns out most of the additional deaths are concentrated among groups that were unlikely to be employed in the first place, such as those over 70 (70% of the total) or under 4. Fewer than 10% of the additional deaths occur among those between the ages of 25 and 64 (Stevens et al 2011).

Why does employment of working-age adults have such an impact on elderly mortality? Stevens et al make a compelling case that it’s because widespread unemployment increases the relative number of people willing to take unpleasant, low-paying nursing home jobs, particularly entry level “aide” positions, and this improves care of residents.

For posterity: I googled this before making a prediction, but do not believe I would have predicted the results.

Robin Hanson has blogged a bit about the healthy-recession puzzle: less exercise; he also mentioned nursing employment somewhere that I can't seem to find.

Effect of Economic Downturns on Fertility

For the rest of this article, I will by default be referring to WEIRD countries.

Based primarily on Economic recession and fertility in the developed world and spot checking its sources, my conclusion is that modern recessions temporarily decrease per capita births, but by and large do not change cohort fertility (i.e. women have the same number of total children they would have had without the recession, but later). Some trends:

Specific numbers are hard to give because every country, demographic, and recession is different, but as an example, this article estimates ~9% decrease in fertility in 2013 in the US.

* This is in societies where children are economic sinks. In situations where they are assets, you would expect the reverse.

My full notes are available here.

Thanks to Eli Tyre for research assistance.

For posterity: I'd predicted a decrease in fertility but hadn't put numbers on it.

I linked to this study above, but for completeness:

A review found that out of 38 studies:

Unfortunately they didn't share the effect size for most of these studies. Looking at other sources (notes here), I found anywhere from a 4% increase (across Europe and the Americas during the 2008 recession) to 60% (among men in Russia during the 1991 crisis). Studies typically found a much larger effect in men than women, sometimes finding no change in the female suicide rate at all. Different studies found different effects on different age groups; these felt too subdivided to me and I ignored them. Unsurprisingly, unemployment was positive correlated with suicide.

For posterity: I'd predicted a rise but not the amount or demographics.

Parent Question
37What will the economic effects of COVID-19 be?Q
Elizabeth, Bucky
2y
Q
31
6 comments, sorted by
top scoring
Click to highlight new comments since: Today at 6:53 AM
[-]johnswentworth2y 23

Here's a very compressed summary and some links on standard economic theory around recessions. Of course economists argue about this stuff to no end, so take it all with a grain of salt.

The former is the domain of real business cycle theory (RBC), the latter includes most of both Keynesian and monetarist models - MRU has a good set of intro-level videos on all that. If you want a perspective with more analysis and less politics, I recommend jumping straight into recursive macro models - though this does require a strong math background.

Real-world recessions can involve either or both of these causes. The textbook example of a real shock would be the 1970's oil drama - though textbooks over the next few decades will likely use coronavirus as an example instead. The 2008 meltdown and the Great Depression, on the other hand, are generally seen as primarily monetarily-driven recessions.

One pattern of major concern today is that a real shock induces a minor recession, the value of a dollar goes up relative to most other things due to the real shock (i.e. people have trouble paying their debts), but then the Fed reacts too slowly/too little to bring the value of a dollar back down (i.e. by "printing money") and a monetary recession results. The Fed's announcements over the past few weeks have been very good on that front - it remains to be seen whether they're enough, but qualitatively they're clearly doing the right sort of things, and they're signalling willingness to do more if needed. We've come a long way since 2008.

As long as the monetary situation continues to look good, we'll mainly want to use an RBC-style model. Things to place more/less emphasis on:

To see how relevant that will be, I'd look at how the virus is impacting production of the major capital sinks: construction, oil wells & pipelines, data infrastructure, power plants & the electric grid, roads & railroads, etc.

One interesting point on this front is that the cost to road work and infrastructure improvements is lower now than it normally is, so if you figure out a way to do construction work safely, you could justify above-baseline investment in some major capital sinks. (It's unclear to me how licensing restrictions come into play here; you have millions of unemployed, but you might not be able to use them to build and repair bridges and roads.)

My impression is that each recession looks different because a recession is something that happens at the macro scale but is caused by events at the micro scale, and there are lots of different ways to cause a recession such that I expect it to be hard to generalize well across recessions other than "less economic activity in aggregate". Not that there's no patterns, but I also expect there to be a lot of anti-patterns or seeming anti-patterns because if you just look at "recession" you'll get a grab bag of things that aren't causally similar even if they produced the same outcome.

Interesting. My impression is that recessions can start many different ways but typically kick off the same self-reinforcing cycle, so that unhappy economies end up being very alike as well.

Could you expand on that "end up being very alike" thought.

My initial reaction was very much like Gordon's and suspect the problem might be looking at aggregate level stats that will tend to hide as much of the details as it will shed any light on things.

One example: (I think, but have not hardcore verified, that) recessions tend to noticeably reduce births. This ends up being really great for the kids who were born into sufficient money, because when they mature there's less competition for top colleges, jobs, etc.