World OptimizationRationality
Frontpage
Roundabout Strategy
Roundabout
The Really Good Example of Henry Ford
A Big List of Examples
When Roundabout Goes Wrong-about
Wait, isn’t this just X?
Conclusion
No comments
This is a linkpost for https://www.thinkingmuchbetter.com/main/roundabout-strategy/

In the middle of the book was a gem.

The book’s author, Mark Spitznagel, synthesized a bunch of ideas from the history of strategy. He coined a newer name for an ancient concept: roundabout. No, not the polite word for "convoluted" or "that traffic thing". Here, this adjective means "pursuing indirect means, to better achieve your goals." A roundabout strategy is one using those means, rather than directly reaching for the ends.

If you’re inclined towards the ancient ways of Eastern philosophy, Spitznagel helpfully references more words for the concept:

"In the Dao, yin (unseen, hidden, passive) balances and is balanced by yang (seen, light, active). The antithesis to shi, the intermediate and circuitous, is li, the immediate and direct. As the "all or nothing" of a pitched battle, li seeks decisive victory in each and every engagement (the "false shortcuts" denounced by the Laozi)…"

"The forward-looking shi strategist takes the roundabout path toward subtle and even intangible intermediate steps, while the li strategist concentrates on the current step, the visible power, the direct, obvious route toward a tangible desired end, relying on force to decide the outcome of every battle. Simply stated, li goes for the immediate hit, while shi seeks first the positional advantage of the setup."

If this sounds hokey or weirdly trivial, an example will make the point clearer. Spitznagel’s canonical roundabout story is that of Henry Ford.

In the early days of automobiles, a workshop of skilled workers would build each car one at a time. This is the direct, or li, way to get cars. To become the largest auto manufacturer, Ford picked a different route.

He built the River Rouge factory, optimized to build consistent-quality cars at a high speed. An assembly line took the task of car-building, split it into microsteps, and optimized each one. Cars were not merely assembled, but their component parts were built in-house, and the components of those components. This extended to the raw materials when Ford bought rubber farms and iron mines. The goal: produce cars faster (in the long run) and make them cheaper (on average). The factory started by producing military equipment and parts, before eventually helping build the Model A and Model T cars.

Now, this was a very roundabout way to build cars, compared to just buying some parts and assembling them by hand. The key is the pursuit of indirect means. The small workshops made more cars than River Rouge, because they had a head start. River Rouge was building no cars (and in fact costing tons of money), for several years. Right until it opened, that is. After that, the direct path’s "head start" was obliterated. 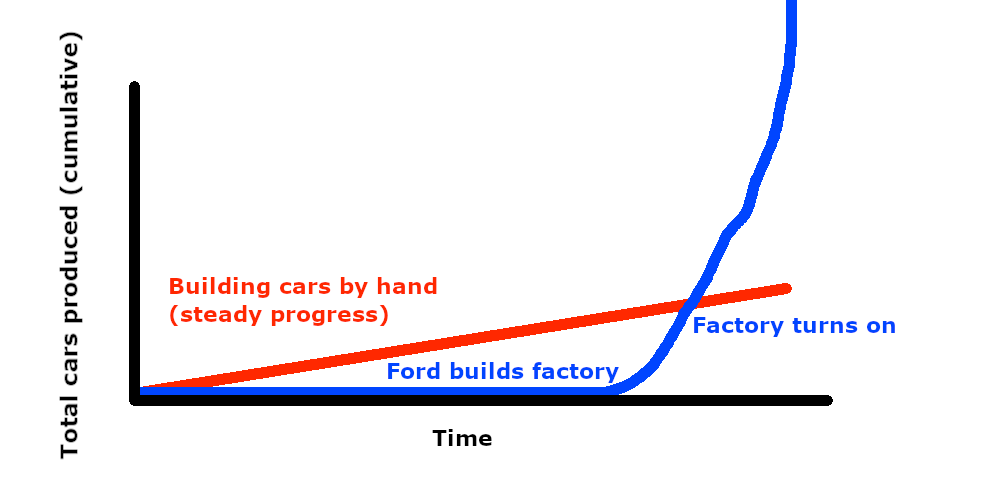 The indirect route is not always best. You can’t prepare forever; you must eventually attack. And you still have to keep track of the short term, lest something closer in time block you from moving further.

The point of using the word "roundabout" is to give a quick name to a specific concept. The concept is linked to other key ideas in the rationalist space, but it is not identical to them.

Is "roundabout" another word for long-term thinking, as opposed to focusing on the short term? Well, no. Roundabout strategy is a strategy, not a goal. You can certainly have long-term goals and work towards them, but that isn’t roundabout own its own. A relevant example is the field of longtermist ethics. You could directly work on long term threats to humanity, or write about the philosophical ideas needed to guide the far future. These are both obviously longtermist in their final goals, and one might be more effective than the other. But the second method is more indirect, and thus more roundabout.

Is "roundabout" simply the delayed gratification thing all over again? Well, no. At some point, you have to turn the factory on, make the profit, solve the riddle, and cash out. And, as with the entrepreneurship example, there are risks with longer time horizons and risky plans. Perhaps the one-marshmallow children, in the classic experiment, didn’t think waiting was worth the risk.

The roundabout concept is a useful abstraction for discourse. It intuitively combines planning, risk, and time, and creates a focal point of discussion. Just having the concept on the table suggests more ideas to be thought of. Think back to the Effective Altruism examples. Maybe some EA projects so capital-intensive that, like Ford’s factory, you need to take on risk and sink lots of capital and time. Otherwise, the goal wouldn’t even be possible. With the "roundabout" concept, these discussions can be more explicit, and people’s stances clarified. "I think your approach is too roundabout, because you are underestimating the risks of your long-term plan."

Naming a concept creates a chunk of the concept. "Roundabout" is quicker to remember than "let’s build this thing to help us do the other thing better". It becomes a tool in your thinking, a lens for judging ideas, and a building block of larger plans. My hope is for the roundabout concept to take a seat at the table of decision-making. And, unlike some concepts, roundabout strategy offers ways to create new strategies, instead of "merely" ruling out the bad ones. "How do we trade stocks faster? Well, what’s a roundabout way to get the orders in… maybe a light-speed cable?"