Is there a simple parameter that controls human working memory capacity, which has been set tragically low?
NaiveTortoise15d1

Reply
Is there a simple parameter that controls human working memory capacity, which has been set tragically low?
NaiveTortoise15d1

So, I managed to find what I think is the original study from which this video came and I'm skeptical that it's strong evidence for chimps' working memory exceeding humans'. It does seem like decent evidence for chimp response time being better.

First of all, they picked the best two chimps to compare against humans:

We compared Ai, the best mother performer, Ayumu, the best young performer, and human subjects (n = 9, all university students) in this task.

Second, if I'm reading it correctly, the chimps got more trials in the experiment and had practiced a very similar activity previously.

Each chimpanzee received 10 sessions and each of 9 humans received a single test session.

A ‘masking task’ to test memory was introduced at around the time when the young became five years old. In this task, after touching the first numeral, all other numerals were replaced by white squares. The subject had to remember which numeral appeared in which location, and then touch them based on the knowledge of numerical sequence. All five naïve chimpanzees mastered the masking task, just like Ai.

In other words, the chimps had been practicing a less time-restricted form of the memory activity for years (?) before participating in the experiment. While it's possible that practice wouldn't have improved the human scores. that goes against my prior based on the fact that humans can dramatically improve at similar activities such as n-back.

Third, the humans actually did better than one of the two (best performing) monkeys, Ai, and did nearly as well as the best monkey, Ayumu, on the longest hold duration task. 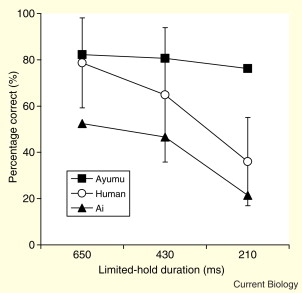 From my perspective, this provides evidence that slower human response time may have played a role in the worse performance in the shorter hold tasks. The authors even mention that the shortest duration is "is close to the frequency of occurrence of human saccadic eye movement", meaning that a human would only get a flash of the image before it disappeared.

Excited to see that the author of this book, Uri Alon, just tweeted about this review.

A beautiful and insightful review of Introduction to Systems Biology, 2nd edition, emphasizing the routes to simplicity in biological systems:
https://lesswrong.com/posts/bNXdnRTpSXk9p4zmi/book-review-design-principles-of-biological-circuits.

It seems like another implication of this model would be that correlated shifts in multiple equilibria on the same timescales provides some evidence of common causes. E.g., DNA damage and cell turnover rates changing at the same time would give some evidence in favor of them being regulated by the same mechanism.

Reply
[AN #80]: Why AI risk might be solved without additional intervention from longtermists
NaiveTortoise18d3

I've seen the "ML gets deployed carelessly" narrative pop up on LW a bunch, and while it does seem accurate in many cases, I wanted to note that there are counter-examples. The most prominent counter-example I'm aware of is the incredibly cautious approach DeepMind/Google took when designing the ML system that cools Google's datacenters.

Thanks, that helps contextualize.

Reply
Under what circumstances is "don't look at existing research" good advice?
NaiveTortoise1mo3

I like this answer, but do question the point about Feynman's gift being mainly traditional rationality.

One of the other comments here recommends against this unless you are a Feynman-level genius, but I think the causality is backwards on this. Feynman’s gift was traditional rationality, something which comes through very clearly in his writing. He tells these anecdotes in order to teach people how to think, and IMHO his thoughts on thinking are worth paying attention to.

I agree that Feynman portrays it that way in his memoirs, but accounts from other physicists and mathematicians paint a different picture. Here are a few example quotes as evidence that Feynman's gifts also involved quite a bit of "magic" (i.e. skills he developed that one would struggle to learn from observation or even imitation).

First, we have Mark Kac, who worked with Feynman and was no schlub himself, describing two kinds of geniuses of which Feynman was his canonical example of the "magician" type (source):

In science, as well as in other fields of human endeavor, there are two kinds of geniuses: the “ordinary” and the “magicians.” An ordinary genius is a [person] that you and I would be just as good as, if we were only many times better. There is no mystery as to how his mind works. Once we understand what he has done, we feel certain that we, too, could have done it. It is different with the magicians. They are, to use mathematical jargon, in the orthogonal complement of where we are and the working of their minds is for all intents and purposes incomprehensible. Even after we understand what they have done, the process by which they have done it is completely dark. They seldom, if ever, have students because they cannot be emulated and it must be terribly frustrating for a brilliant young mind to cope with the mysterious ways in which the magician’s mind works... Feynman is a magician of the highest caliber.

(Note that, according to this source, Feynman did actually have 35 students, many of whom were quite accomplished themselves. so the point about seldom having students doesn't totally hold for him.)

The generation coming up behind him, with the advantage of hindsight, still found nothing predictable in the paths of his thinking. If anything he seemed perversely and dangerously bent on disregarding standard methods. "I think if he had not been so quick people would have treated him as a brilliant quasi crank, because he did spend a substantial amount of time going down what later turned out to be dead ends," said Sidney Coleman, a theorist who first knew Feynman at Caltech in the 50's.

"There are lots of people who are too original for their own good, and had Feynman not been as smart as he was, I think he would have been too original for his own good," Coleman continued. "There was always an element of showboating in his character. He was like the guy that climbs Mont Blanc barefoot just to show that it can be done."

Feynman continued to refuse to read the current literature, and he chided graduate students who would begin their work on a problem in the normal way, by checking what had already been done. That way, he told them, they would give up chances to find something original.

"I suspect that Einstein had some of the same character," Coleman said. "I'm sure Dick thought of that as a virtue, as noble. I don't think it's so. I think it's kidding yourself. Those other guys are not all a collection of yo-yos. Sometimes it would be better to take the recent machinery they have built and not try to rebuild it, like reinventing the wheel. Dick could get away with a lot because he was so goddamn smart. He really could climb Mont Blanc barefoot."

Coleman chose not to study with Feynman directly. Watching Feynman work, he said, was like going to the Chinese opera. "When he was doing work he was doing it in a way that was just -- absolutely out of the grasp of understanding. You didn't know where it was going, where it had gone so far, where to push it, what was the next step. With Dick the next step would somehow come out of -- divine revelation."

In particular, note the last point about "divine revelation".

Admittedly, these are frustratingly mystical. Stephen Wolfram describes it less mystically and also sheds light on why his descriptions of his discoveries always made them seem so obvious after the fact even though they weren't (source:

I always found it incredible. He would start with some problem, and fill up pages with calculations. And at the end of it, he would actually get the right answer! But he usually wasn't satisfied with that. Once he'd gotten the answer, he'd go back and try to figure out why it was obvious. And often he'd come up with one of those classic Feynman straightforward-sounding explanations. And he'd never tell people about all the calculations behind it. Sometimes it was kind of a game for him: having people be flabbergasted by his seemingly instant physical intuition, not knowing that really it was based on some long, hard calculation he'd done.

He always had a fantastic formal intuition about the innards of his calculations. Knowing what kind of result some integral should have, whether some special case should matter, and so on. And he was always trying to sharpen his intuition.

Now, it's possible that all this was really typical rationality, but I'm skeptical given that even other all star physicists and mathematicians found it so hard to understand / replicate.

All that said, I think Feynman's great as is deriving stuff from scratch. I just think people often overestimate how much of Feynman's Feynman-ness came from good old fashioned rationality.

(Note: responded quickly before removing. I've since edited this comment now that I have more time. Also I'm not the person who downvoted your post.)

I definitely did not intend to cause anyone or their family danger (or harassment, etc.), so I've removed the post.

Mostly in the selfish interest of showing that I wasn't being negligent, I did consider this risk before posting. That's why I noted that I have no information beyond what's already public and was taking into account that since I heard this speculation on a podcast which involved one relatively prominent cryptocurrency person (I won't say who so as not to publicize it further), it seemed unlikely that my post would add additional noise.

All that said, I still agree that even a small chance of harm is more than enough reason to remove the post. Especially, since:

Nice, I'd neither heard nor thought of this framing before. Thanks!