Since organizing a group flour buy in April 2020 I've been occasionally putting in orders at a restaurant supply store. Generally this happens because we're running out of chocolate: I've failed at maintaining my taste for bad chocolate, but if we buy in bulk we can get some very good vegan chocolate for $4.20/lb ($0.26/oz). A lot of what they sell is quite expensive, and everything else is in pretty large quantities, but lots of interesting options! This time I decided to get half a bushel of prune plums.

This is really quite a lot of plums: about 22lb. After eating all we wanted I was worried they might go bad soon, so the kids and I decided to try making prunes. We cut the plums in half, took out the pits, and put them on a rack on a baking sheet. I put in a pizza stone to keep the oven temperature steady, and set the oven to "warm": 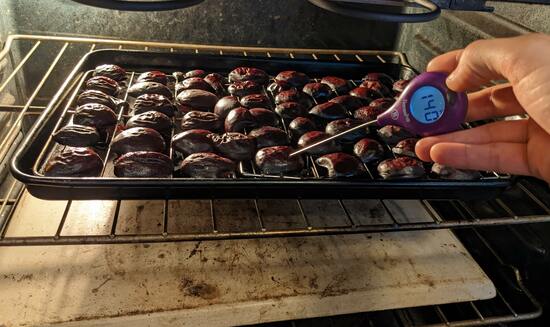 While the oven claims this is 170F, they pretty consistently read at 140F, which is a much better temperature for this anyway.

After a day or so they tasted about right, so I took them out of the oven. You can see that there are quite a few missing from sampling them as they cooked: 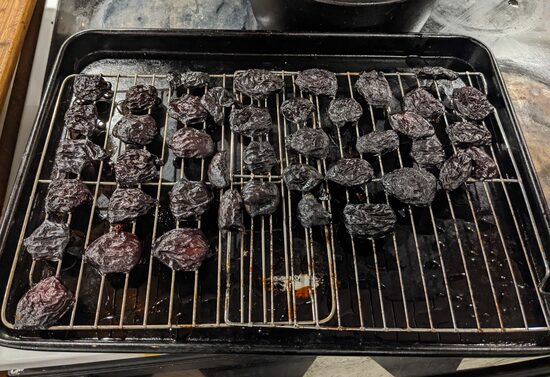 The flavor got much more intense, beyond what you would expect from simple concentration.

The prunes had lost some juice to dripping down into the pan. I scraped it up and it's good fruit leather: 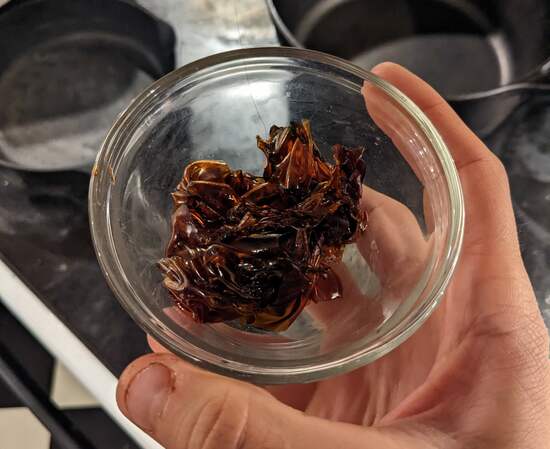 I liked these enough that I decided to do another batch of plumns, this time for a "peach" cake. I didn't halve them or remove the pits this time, because they don't need to hold together, and I didn't use a rack:

After about a day I took them out and removed the pits: 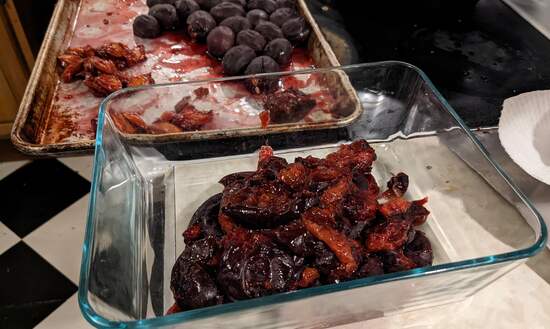 I made the peach cake, which is essentially a half inch of cake on top of a half inch of cooked fruit, and brought it to Tuesday family dinner. While the kids weren't fans it was popular with the adults. Forgot to take a picture, sorry!

Now I'm cooking the rest of the plums down to keep in the fridge as something a bit jam-like (but not jam, that's obsolete).