I laugh at us too GLaDOS. Sometimes, I have to so I don't cry.

Sometimes I'd really rather be a dolphin, y'know? They're quite intelligent, and aren't about to destroy the world by accident. Or maybe a bonobo.

Reply
0mytyde7yKinda speciesist, don'tcha think? People in the modern world in large part have learned to be illogical, but it isn't an inherent quality; in fact, some would argue that the current low level of rational capacity is very difficult to maintain. If people were inherently irrational, why can everyone learn mathematics, why can children sometimes disagree with their parents, and why was a prerequisite for degeneration into the current American political system that 7 corporations should own all major media outlets?
11Clippy9yI regard humans as incongruent as well, albeit without crying.
See in context

Please remember to have no heroes or villains, but this just looks plain bad to be honest. I'm lowering my estimation of the quality of Stephen J. Gould's work in this area. 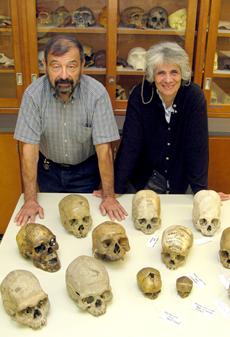 In a 1978 Science paper, Gould (1941 - 2002) , reported that the Samuel George Morton (1799-1851), "a prominent Philadelphia physician," had mis-measured the cranial capacities of his 1,000-skull "American Golgotha" collection gathered from around the world, to suit his racist beliefs. The finding led to one of Gould's best-known books, The Mismeasure of Man, a critique of scientific racism.

"Morton is now viewed as a canonical example of scientific misconduct. But did Morton really fudge his data?," asks a PLoS Biology study led by anthropologist Jason Lewis of Stanford University. "Are studies of human variation inevitably biased, as per Gould, or are objective accounts attainable, as Morton attempted?"

So, the study team remeasured the skulls collected by Morton, now owned largely by the University of Pennsylvania Museum of Archaeology and Anthropology in Philadelphia.

Overall, they find, Morton did make mistakes in measuring skull capacity (he first stuffed them with seeds, and later lead shot to measure their brain size). But the mistakes were random. The random mistakes didn't favor any racial theory of larger brain sizes for white people over others.

"Given how long Gould's work has been criticized in this arena, I'm a little surprised that it took this long for the work to be done to write this article," says the University of Texas's David Prindle, author of Stephen Jay Gould and the Politics of Evolution. "People who dislike Gould's work will likely go on disliking him even more after this article. People who are fans of his writing will likely go on supporting his views."

In reevaluating Morton and Gould, we do not dispute that racist views were unfortunately common in 19th-century science or that bias has inappropriately influenced research in some cases. Furthermore, studies have demonstrated that modern human variation is generally continuous, rather than discrete or ''racial,'' and that most variation in modern humans is within, rather than between, populations. In particular, cranial capacity variation in human populations appears to be largely a function of climate, so, for example, the full range of average capacities is seen in Native American groups, as they historically occupied the full range of latitudes, say the study authors.

Samuel George Morton, in the hands of Stephen Jay Gould, has served for 30 years as a textbook example of scientific misconduct. The Morton case was used by Gould as the main support for his contention that ''unconscious or dimly perceived finagling is probably endemic in science, since scientists are human beings rooted in cultural contexts, not automatons directed toward external truth''. This view has since achieved substantial popularity in ''science studies''. But our results falsify Gould's hypothesis that Morton manipulated his data to conform with his a priori views. The data on cranial capacity gathered by Morton are generally reliable, and he reported them fully. Overall, we find that Morton's initial reputation as the objectivist of his era was well-deserved.