The question of how much more infectious B.1.1.7 is is pretty useless without also referencing a generation time estimate. Different agencies/countries use different values for that, so the numbers for the relative R number R_B.1.1.7 / R_old they give are not directly comparable. I expanded on this in a comment a while ago.

In the meantime, the Danish SSI also published a report in which they also stress that the numbers of how much more infectious B.1.1.7 is can't be compared across countries due to in particular different generation times being used. This report is from January 21., and in it they estimate relative R to be 1.36 as of January 14. A newer report from February 3. mentions that SSI now estimates a relative R for B.1.1.7 of 1.55. The SSI uses a generation time of 4.7 days, the English PHE uses a generation time of 6.57 days.

The quoted conclusion of 37% increase in infectiousness from the original post is unfortunately a mistake, see my comment here. 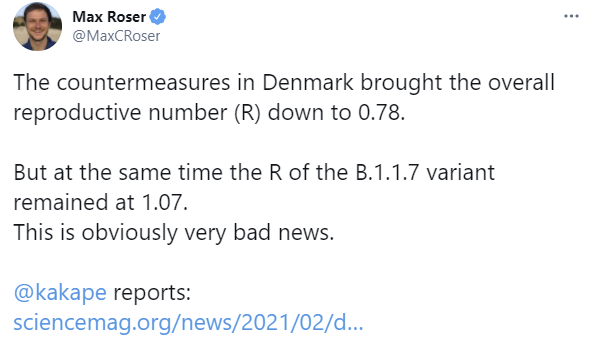 This is an estimated 37% increase in infectiousness. Compared to 50%, that’s much much better. The difference is enough to give us a puncher’s chance of things not being so bad, both buying us time and reducing how bad it is when the time comes.

Unfortunately, this is an incorrect conclusion from the data referenced in the tweet. It seems the 37% number was obtained by dividing 1.07 by 0.78, which rounds to 1.37. However, while 1.07 is the R of the B.1.1.7 variant, the 0.78 is not the R of the other variants, but the overall R (it says so right in the tweet!), which includes B.1.1.7. As B.1.1.7 is a sizable portion of total cases, it already skews overall R upwards quite a bit, and this means that the 37% number is an underestimation.

The latest conclusion from the SSI that I am aware of is, as is also mentioned in the article linked in the post, that B.1.1.7 is 55% more infectious (using the Danish generation time estimate of 4.7 days).

SSI (Denmark) published a new report today, that makes some of the things I talked about in the parent comment clearer.

Bilag (=Appendix) B talks about estimating the relative growth rate for B.1.1.7. On page 14 they write:

On the next page they consider the relative contact number (=Rt) Rt_B.1.1.7 / Rt_other. They clarify that Rt is taken with respect to an assumed generation time of 4.7 days for all variants, and estimate this quotient to be

Taking this to the power of 7/4.7 to get weekly rates as I did in my parent comment we would get a weekly factor of 1.58, which is different from the 71% increase per week that they had. I am not sure how to reconcile this. They write that they are using the SEIR model (which I am not familiar with) to convert between the data they consider on page 14 and the ratio of Rt's, so this might be the reason.

In the former control group, Sweden is throwing out the extra vaccine doses in Pfizer vials, because we might dislike the FDA but at least we don’t have to deal with the European Medicines Agency, who are totally Delenda Est Club members:

But good news, they could soon give the go ahead to stop throwing away vaccine doses.

Just for additional information / clarification, as it seems to me this could be interpreted to suggest that EU countries, after starting vaccinations on the 2020-12-27, threw away anything left over after taking 5 doses out of a vial until some time after 2021-01-07, whenever EMA approved using the extra doses:

While I am not familiar with EMA's role in this, and also do not know how Sweden handled it, it is certainly not true that every EU country threw away what was left over after 5 doses. In Denmark it was headline news on 2020-12-28 that more doses had been vaccinated than expected the previous day, the reason being that while 5 doses per vial was expected, they usually got 6 and often even 7 doses out of each vial. These extra doses were used from the start, and this was encouraged from the relevant Danish authorities[1], see for example this article or the evening news on public television of that day.

Short version: I think it comes down to different generation times used, and the Danish reports, the English reports, as well as what the referenced tweet 1 is saying are consistent with (assuming for the moment cases of the other variants stay constant) B.1.1.7 cases increasing by something like 60% to 80% each week. I would be very happy about corrections from someone who understands this better, I am not an expert at all.

(Note: I will think about the change in infectiousness between other, old variants and B.1.1.7 as multiplicative below.)

In interpreting these numbers I think it is highly relevant to understand what is used as a generation time. In the referenced tweet 1, it is stated that a generation time of 5.5 is used. However, PHE (Public Health England), in their first report on B.1.1.7 2 seem to use 6.57:

I interpret this like this: The effective reproduction number Rt is the factor the cases multiply by in the timespan of a generation time, so here PHE uses 6.57 days, meaning with their Rt we can get the weekly increase as Rt^(7/6.57). By the way, I think they made a typo and meant "by raising them to the power of 6.57/7".

Unfortunately this is all not very transparent, SSI's reports don't really make this clear, not even when they cite the PHE numbers... :(.

It is unclear to me whether it is better to think of the change in infectiousness between other variants and B.1.1.7 multiplicatively (so assuming Rt_B.1.1.7 / Rt_other will stay roughly constant if Rt_other changes) or additively (so assuming Rt_B.1.1.7 - Rt_other). But this might be dependent on how exactly the virus spreads, how this interacts with how people behave etc... I have been thinking about it multiplicatively up to now, but if someone has data / arguments for why additively or some other model might be better I would be very interested.