Was the K-T event a Great Filter?

I've been wondering about this question for a while, but some new research released today reminded me of it:

The seasonal timing of the catastrophic end-Cretaceous bolide impact places the event at a particularly sensitive stage for biological life cycles in the Northern Hemisphere. In many taxa, annual reproduction and growth take place during spring. Species with longer incubation times, such as non-avian reptiles, including pterosaurs and most dinosaurs, were arguably more vulnerable to sudden environmental perturbations than other groups43 (for example, birds).

Similarly, large-scale wildfires raging across the Southern Hemisphere9,34,41 may have been evaded by hibernating mammals that were already sheltered in burrows34,41 in anticipation of austral winter. Additional modes of seasonal dormancy, torpor and/or aestivation, which are nowadays practised by various mammals46,47 as well as certain amphibians, birds and crocodilians48, could have facilitated further underground survival.

The article speculates that the particular time of year at which the asteroid struck is responsible for the pattern of extinctions that resulted. I have also heard it suggested (don't remember where) that the particular location of the impact - in shallow water just off the coast - had a different effect than if it had hit either on land or in the deep sea (i.e. the large majority of Earth's surface). And it seems somewhat odd that an impact of that size should've occurred in the so recent past:

Impacts of asteroids spanning more than 10 kilometers are rare and happen about every 250 to 500 million years. Having one such event only 66 million years ago is therefore mildly special.

Is the peculiarity of the K-T event yet another example of "fine-tuning" explained by the anthropic principle?

Consider (reposting from before) the fossil evidence of the progression in intelligence over time: 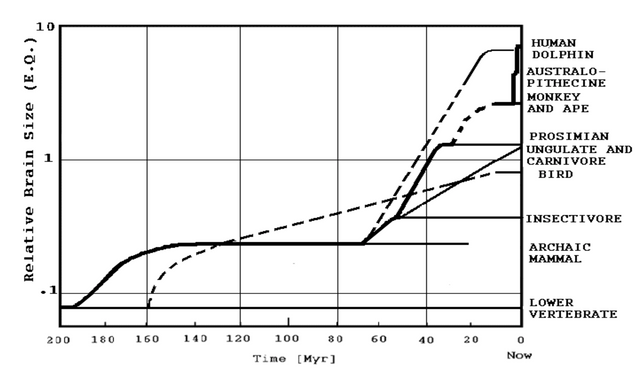 The first chart shows the encephalization quotient (EQ) of various lineages over time, while the second shows the maximum EQ of all known fossils from any given time.

This suggests that the Mesozoic was a long period of stagnation in the development of intelligence on Earth, and that if the K-T event had not occurred, it would've been unlikely for human-level intelligence ever to have evolved, whether from the mammalian or the reptilian lineages.

When we think about the likelihood of intelligence evolving, it's tempting to look at a particular species or lineage in isolation; but really this is missing the forest for the trees, because evolution is a response to a changing environment, a large portion of which consists of the other species in the ecosystem. Our mouse-like ancestors that survived the K-T event might never have evolved any greater intelligence than that, unless a finely-tuned mass extinction had completely cleared the terrestrial megafauna niche while leaving the burrowers intact. Is that why you're here reading this today?

The answer to this question is not purely academic; it has direct implications for estimating whether we have already passed the Great Filter.

I know next to nothing about paleontology or evolution, just what I've learned from skimming a few articles. I'd love to hear from others more knowledgeable in the area.

I like this post very much! I really don't understand how it can have so few up votes.

I know even less than you about palaeopathology or evolution, but your argument seems spot on to me. And, at least, something that should be deeply studied. Thanks!