Many altruistic actions have downside risks; they might turn out to have negative effects, or to even be negative overall. Perhaps, for example, the biosecurity research you might do could pose information hazards, the article you might write could pose memetic downside risks, or that project you might start could divert resources (such as money or attention) from more valuable things.

This means that one way to be more effective in one's altruism is to prevent or mitigate downside risks and information hazards. This post is intended to aid with that goal by clarifying the concepts of downside risks and information hazards, and how they relate to each other and to other “types” of effects (i.e., impacts). This will be done through definitions, visuals, and examples.

I believe that the ideas covered in this post are fairly well-known, and should seem fairly intuitive even for those who hadn’t come across them before. But I still think there’s value in showing visually how the concepts covered relate to each other (i.e., “mapping” them onto the space of possible types of effects), as this post does.

First I’ll present and explain the space in which I’ll later map downside risks and information hazards. This space is shown in the following figure (along with a handful of examples to illustrate the ideas[1]): 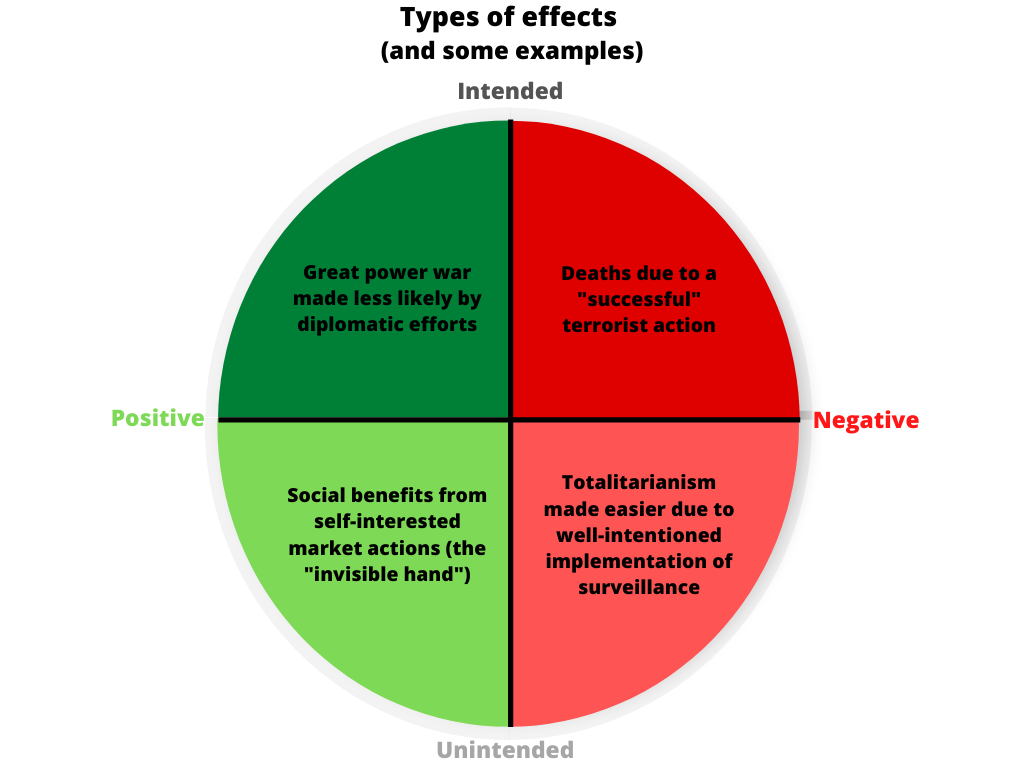 In this model, an action is judged as normatively or morally “positive” and “negative” from the perspective of the person using this model in analysing, observing, or considering one or more effects. We could call this person the “analyst”. This analyst may also be the “actor”; the person who is performing, or might perform, the actions that will lead to the effects in question. But the analyst will not necessarily be the actor.

However, if I am using this model in thinking about the potential effects of terrorist actions, I am the analyst but not the actor. From my perspective, deaths from such actions are negative effects. This is the case even if the terrorists (the actors) would view those deaths as positive effects.

In contrast, I mean “intended” and “unintended” to be from the perspective of the actor. This is why I call deaths from a terrorist action an intended effect, despite the fact that I (the analyst) would not intend it. I have in mind a relatively loose and “commonsense” definition of intend, along the lines of “to have as a plan or purpose” (Cambridge).

All effects that are unanticipated (by the actor) are also unintended (by the actor). This is because, if an actor doesn't anticipate that an action will cause a particular outcome, it can't have been the case that the actor chose to take that action in order to cause that outcome.

Arguably, some effects that were anticipated will also have been unintended. For example, an actor might realise that rolling out a mass surveillance system could result in totalitarianism, and believe that that outcome would be bad. But the actor might decide to take this action anyway, as they judge the action to be net beneficial in expectation (e.g., to help reduce certain existential risks). In this case, the effect was anticipated but not intended; the reason the actor took the action was not to bring about that outcome.[2]

Three last things to note about this representation of the “space” of possible effects:

One definition of a downside is “The negative aspect of something otherwise regarded as good or desirable” (Lexico). By extension, I would say that, roughly speaking, a downside risk is a risk (or possibility) that there may be a negative effect of something that is good overall, or that was expected or intended to be good overall. Note that a downside risk exists before the action is taken or the full effects are known (i.e., ex ante). (There’s also a more specific meaning of the term downside risk in finance, but that isn’t directly relevant here.)

It seems useful to also be able to refer to occasions when the negative effects actually did occur (i.e., ex post). It seems to me that the natural term to use would be downside effect, which we could roughly define as “a negative effect of something that is good overall, or was expected or intended to be good overall.”[4]

Thus, it seems to me that, roughly speaking, downside effects are unintended, negative effects, and correspond to the bottom right quadrant of our space of effects:[5] 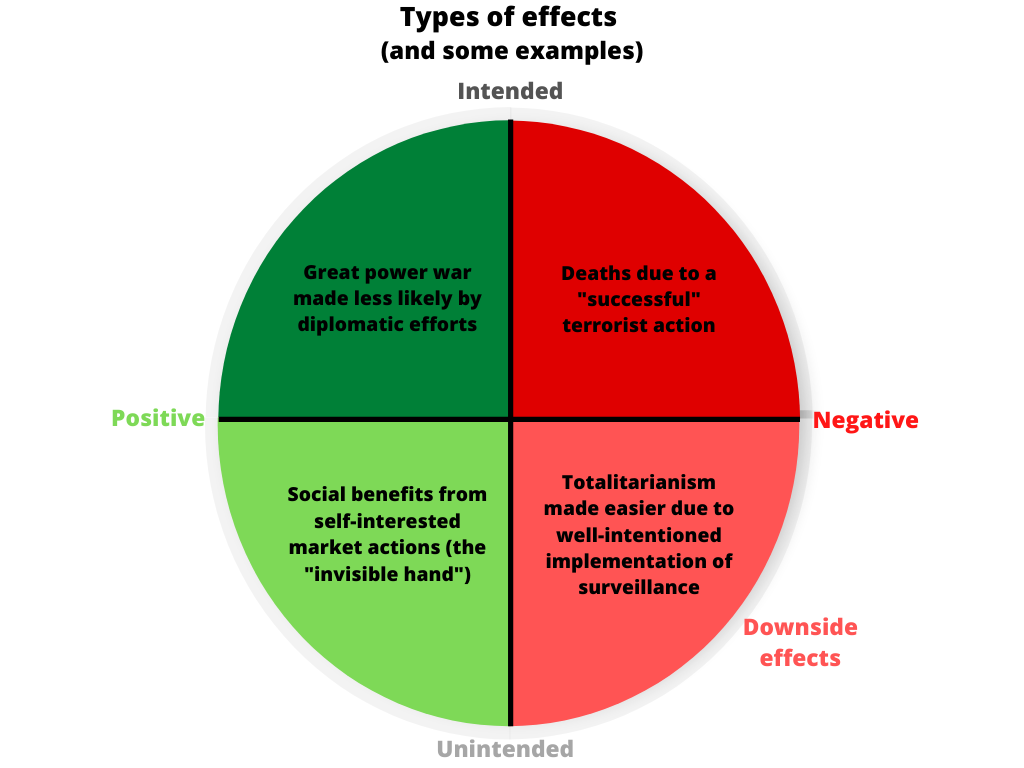 We could also create an “ex ante” version of this figure, where effects are replaced with possibilities, or with effects which one has credence might occur. In this version of the figure, we'd replace “downside effects” with “downside risks”.

An information hazard is “A risk that arises from the dissemination or the potential dissemination of (true) information that may cause harm or enable some agent to cause harm” (Bostrom). There are many types of information hazards, some of which are particularly important from the perspective of reducing catastrophic or existential risks. For example, there are “Data hazard[s]: Specific data, such as the genetic sequence of a lethal pathogen or a blueprint for making a thermonuclear weapon, if disseminated, create risk” (Bostrom).

We can thus map “effects from information” (both benefits and harms) as subsets of each of the four quadrants of our space of effects: 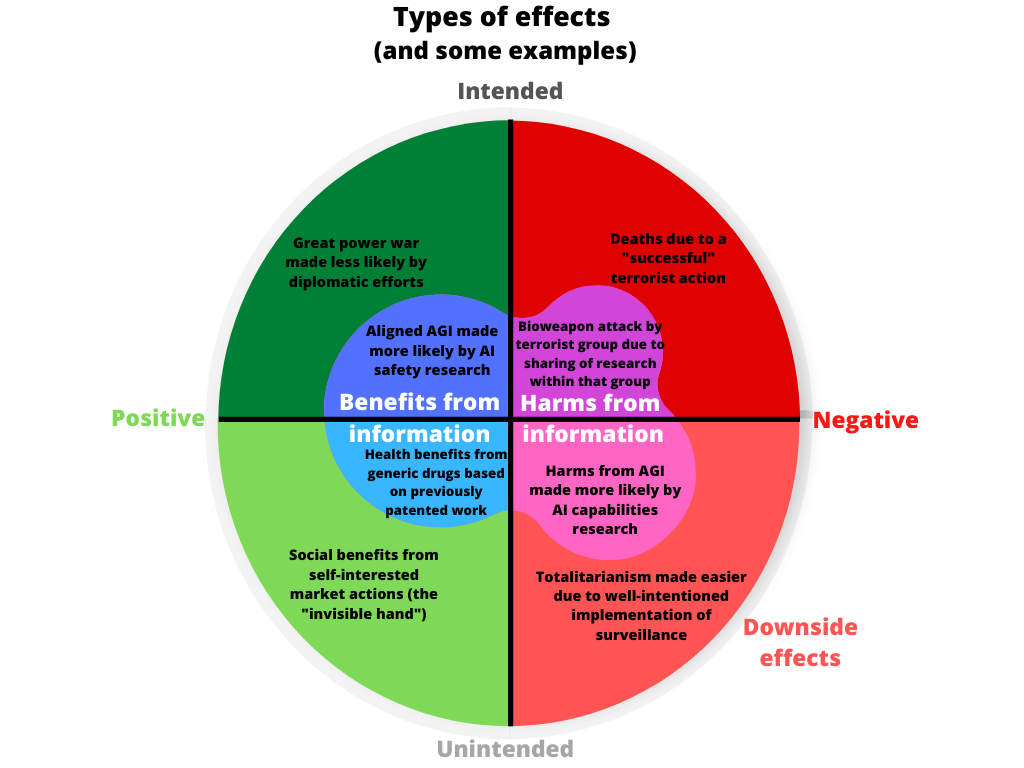 (Again, I’ve added a handful of examples to illustrate the concepts. Note that there’s no particular significance to the specific “splotchy” shape I’ve used; I just thought that a circle made the diagram look “too neat” and too much like a bullseye.)

Most obviously, there are many cases of intended positive effects of information. This is arguably the main premise justifying a great deal of expenditure on education, research, journalism, and similar.

The most obvious kinds of harm from information hazards are unintended negative effects. For example, in the above quote from Bostrom, it seems likely that the people who originally developed or shared “the genetic sequence of a lethal pathogen or a blueprint for making a thermonuclear weapon” did not intend for this to lead to a global or existential catastrophe. Thus, such an outcome, if it occurred, would be an unintended effect.

But it also seems possible for harms from information hazards to be intended. For example, the people who developed or shared “the genetic sequence of a lethal pathogen or a blueprint for making a thermonuclear weapon” may indeed have intended for this to lead to something that “we” (the “analysts”) would consider negative. For example, those people may have intended for their own militaries to use these technologies against others, in ways that “we” would see as net negative.

Thus, harms from information hazards are negative effects (whether intended or not) from the sharing of (true) information, corresponding to both the purple and pink sections of the above diagram.

One action can have many effects

Part of why Convergence thinks that these concepts are important, and that it may useful to clarify and map them, is that well-intentioned actions can have (a chance of causing) a variety of effects. Thus, we think that an important way to ensure one’s actions have a more positive impact on the world is to attend to, predict, and mitigate the downside risks and information hazards those actions might pose.

We will illustrate this with an example. Imagine you’re studying computer science, and considering the action of becoming an AI safety researcher, with a focus on reducing the risks of particularly catastrophic outcomes. Some of the potential effects of this action can be shown in the diagram below: 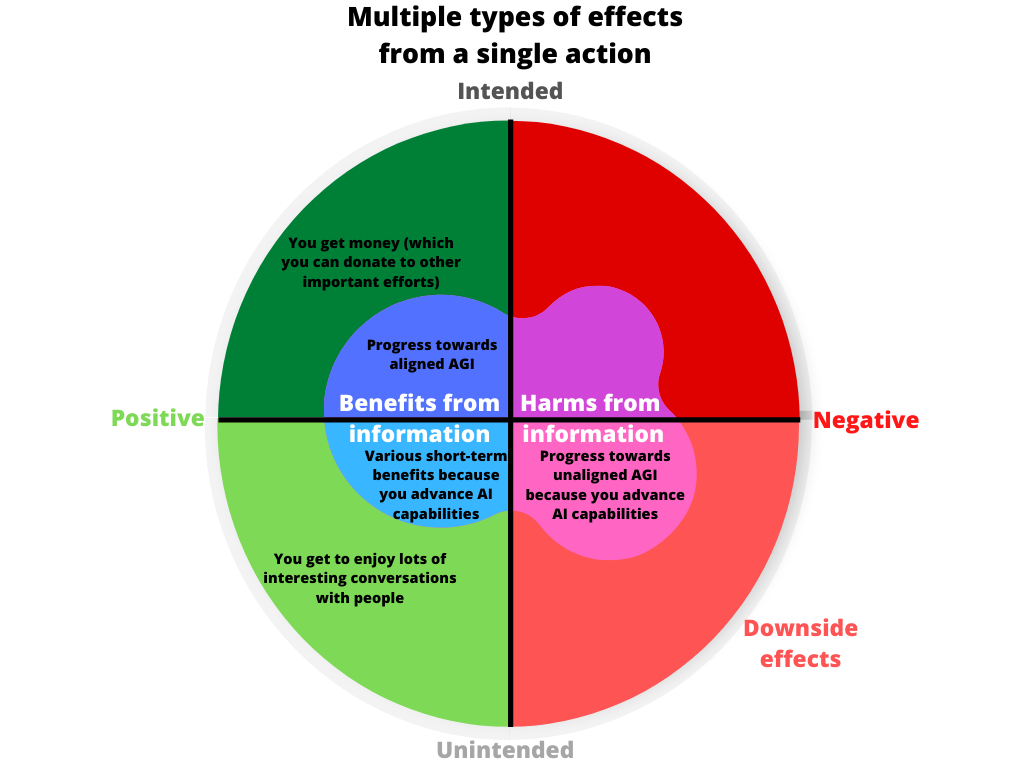 Your rationale for taking this action might be that you could make progress towards safe, aligned AGI (which has various benefits, including reducing risks from unsafe, unaligned AGI), and that you could make a good salary, allowing you to donate more to efforts to mitigate other risks (e.g., work on alternative foods or on reducing biorisks). These are the intended effects of the action. Both are positive, and the first occurs via the sharing of (true) information.

Finally, although your research would be intended to advance AI safety and alignment in particular, it might also result in insights that advance AI capabilities in general (see also this post). This could have various short-term benefits, such as leading to better diagnosis and treatment of medical conditions, earlier detection of potential pandemics, and faster progress of clean energy technologies. But it could also advance progress towards unaligned, unsafe AGI.

Note that this is just one example; we think that the ideas in this post also apply to non-researchers and to issues other than catastrophic and existential risks.

I hope that you’ve found the ideas and explanations in this post clear, and that they’ll be helpful to you in considering the range of potential effects your actions could have, and choosing actions so as to minimise the downsides and maximise the benefits.

In my next post, I’ll discuss in more detail why people should care about information hazards, and provide some suggestions for how to handle them.

There are many other ways one could carve up the space of types of effects (or types of ex-ante possibilities), and other ways the space could be represented (e.g., with a third dimension, or with decision trees). For a handful of examples:

We hope to provide more of these sorts of analyses and mappings in future. But we would also be excited to see others do similar work.

Thanks to David Kristoffersson and Justin Shovelain for helping develop the ideas in this post, and for useful feedback.