With covid, it is common for people to look at seven day trailing averages. For example, the MA Covid Dashboard has "the seven day average of percent positivity is 18.42%". While this isn't exactly wrong, it's not a good fit for a rapidly rising number. Here's how it's usually presented: 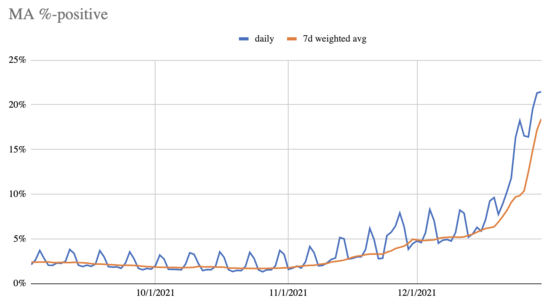 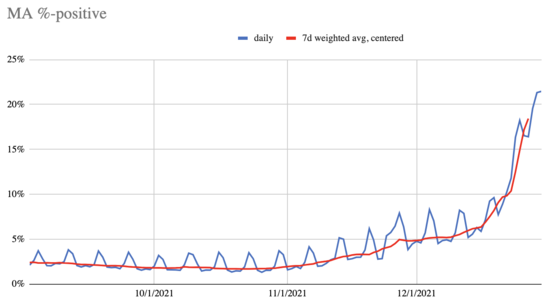 On the other hand, these variations are clearly not noise; it's a weekly cycle. People are much more likely to test positive on the weekend than during the week:

This makes sense: weekend testing will include a larger proportion of people who are getting tested because they are sick.

Instead of trying to average this pattern away, we can use it, scaling each day by the inverse of its average departure from the 7d average: 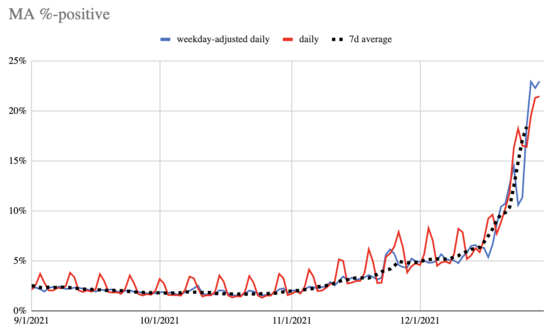 This gives us a metric that is as responsive as the daily numbers with less of the day-by-day variation from from measuring different populations on different days. It's not perfect, you can see it getting things wrong by treating Thanksgiving and Christmas like normal days, but it's pretty good.

When case numbers are changing quickly, this responsiveness is helpful. Using the most recent seven days we'd get a test positivity of 18%, but the most recent weekday-adjusted daily number is 23% (+25%).

Thank you. This helped me think more clearly about something we do often.