I was curious what some of this looked like, so I graphed it, using the dates you specifically called out probabilities. For simplicity, I assumed constant probability within each range (though I know you said this doesn't correspond to your actual views). Here's what I got for cumulative probability:

And here's the corresponding probabilities of TAI being developed per specific year: 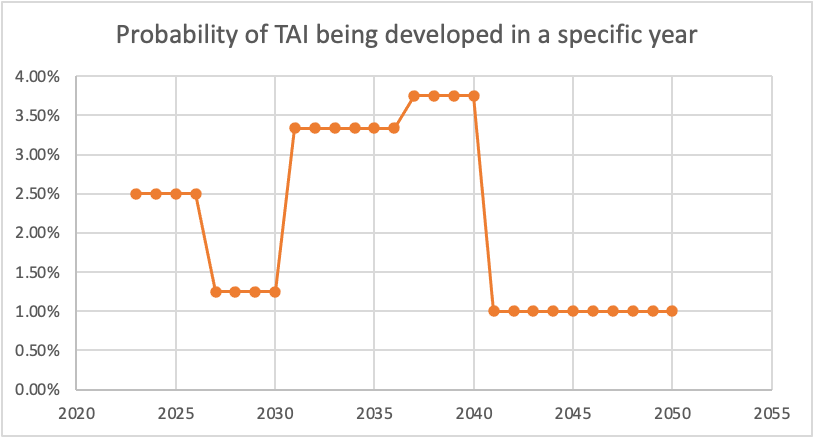 The dip between 2026 and 2030 seems unjustified to me. (I also think the huge drop from 2040-2050 is too aggressive, as even if we expect a plateauing of compute/another AI winter/etc, I don't think we can be super confident exactly when that would happen, but this drop seems more defensible to me than the one in the late 2020s.)

which seems more intuitively defensible to me. I think this difference may be important, as even shift of small numbers of years like this could be action-relevant when we're talking about very short timelines (of course, you could also get something reasonable-seeming by shifting up the probabilities of TAI in the 2026-2030 range).

I'd also like to point out that your probabilities would imply that if TAI is not developed by 2036, there would be an implied 23% conditional chance of it then being developed in the subsequent 4 years ((50%-35%)/(100%-35%)), which also strikes me as quite high from where we're now standing.

If we assume the exact numbers here are correct, then the actual conclusion is that GPT-3 was trained on the amount of compute the brain uses in 10 million seconds, or around 100 days.

It's interesting the term 'abused' was used with respect to AI. It makes me wonder if the authors have misalignment risks in mind at all or only misuse risks.

A separate press release says, "It is important that the federal government prepare for unlikely, yet catastrophic events like AI systems gone awry" (emphasis added), so my sense is they have misalignment risks in mind.

Reply
What does Functional Decision Theory say to do in imperfect Newcomb situations?
Daniel_Eth3mo2

Okay, but I've also seen rationalists use point estimates for probability in a way that led them to mess up Bayes, and such that it would be clear if they recognized the probability was uncertain (e.g., I saw this a few times related to covid predictions). I feel like it's weird to use "frequency" for something that will only happen (or not happen) once, like whether the first AGI will lead to human extinction, though ultimately I don't really care what word people are using for which concept.

How common is it for transposon count to increase in a cell? If it's a generally uncommon event for any one cell, then it could simply be that clones from a large portion of cells will only start off with marginally more (if any) extra transposons, while those that do start off with a fair bit more don't make it past the early development process.

A perhaps even easier (though somewhat less informative) experiment would be to Crispr/CAS9 a bunch of extra transposons into an organism and see if that leads to accelerated aging.

Reply
larger language models may disappoint you [or, an eternally unfinished draft]
Daniel_Eth8moΩ0-2

Play with GPT-3 for long, and you'll see it fall hard too.
...
This sample is a failure.  No one would have written this, not even as satire or surrealism or experimental literature.  Taken as a joke, it's a nonsensical one.  Taken as a plot for a film, it can't even keep track of who's alive and who's dead.  It contains three recognizable genres of writing that would never appear together in this particular way, with no delineations whatsoever.

This sample seems pretty similar to the sort of thing that a human might dream, or that a human might say during/immediately after a stroke, a seizure, or certain types of migraines. It's clear that the AI is failing here, but I'm not sure that humans don't also sometimes fail in somewhat similar ways, or that there's a fundamental limitation here that needs to be overcome in order to reach AGI.

The first time you see it, it surprises you, a crack in the floor... Eventually, you no longer picture of a floor with cracks in it.  You picture a roiling chaos which randomly, but regularly, coalesces into ephemeral structures possessing randomly selected subsets of the properties of floors.

^I guess the corollary here would be that human minds may also be roiling chaos which randomly coalesce into ephemeral structures possessing properties of floors, but just are statistically much more likely to do so than current language models.

FWIW, Hanson has elsewhere promoted the idea that algorithmic progress is primarily due to hardware progress. Relevant passage:

Maybe there are always lots of decent ideas for better algorithms, but most are hard to explore because of limited computer hardware. As hardware gets better, more new ideas can be explored, and some of them turn out to improve on the prior best algorithms. This story seems to at least roughly fit what I’ve heard about the process of algorithm design.

So he presumably would endorse the claim that HLMI will likely requires several tens of OOM more compute than we currently have, but that a plateauing in other inputs (such as AI researchers) won't be as relevant. (Here's also another post of Hanson where he endorses a somewhat related claim that we should expect exponential increases in hardware to translate to ~linear social impact and rate of automation.)