Summary: Neuroimaging scans and EEG readings comparing nonconscious and conscious stimuli are compared, showing particular patterns in conscious processes. These findings are in line with predictions made by the Global Workspace Theory of consciousness, in which consciousness is closely related to interaction between specialized modules of the brain.

When a bunch of photons hit your eye, it unleashes a long chain of cause and effect that leads to an image being mapped in your brain. When does that image become conscious?

Conscious and Unconscious Perception1
The most basic method of discriminating between conscious and unconscious information is to ask the subject if they noticed it. However, people can respond to information that they don't report. What does it mean to notice something then?

Merikle et al performed experiments in the 80s which helped to resolve this question. In the Stroop task, people are asked to read words written in a different color than the word. Words written in their color (green) are easier to read than those not in their color (also red). Merikle modified the stroop task, using only two colors (red and green), and using the word to prime subjects to describe the color. As was expected, when "green" comes before a green square, subjects respond faster than with no priming.

However, when the situation is regularly reversed and the "red" prime normally comes before a green square (and vice versa) people also respond faster to similar levels. That is to say, subjects are able to notice that the prime and stimulus are incongruent, and act on that information to respond faster to the stimuli.

When the reversed prime ("red" before green) is flashed for such a short time span that people don't report seeing it, they are unable to use this information to react faster to the green stimulus, and the typical Stroop effect is observed -- being subliminally primed with a congruent color speeds up recognition, being subliminally primed with an incongruent color slows it.

There are methods of interfering with subject's reports (muteness trivially, anosognosia creepily), but for most humans it very closely corresponds to what is normally considered conscious perception.
People's brains respond to information even if the person is unaware of it, but there are measurable differences in perception without awareness and perception with it.
Methods of Manipulating Perception2
Nonconscious stimulation is split up into two categories:  subliminal  and  preconscious. A subliminal stimulus is one in which the bottom up process information is so reduced that people cannot detect it, even if they're paying attention to it. A preconscious stimulus is one that is potentially noticeable (i.e. it's presented in a way that subjects can normally report seeing it), but not reported because of other distractions. 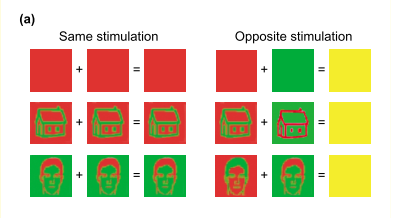 To present a stimulus subliminally you can:
To present something preconsciously you can:
Neurological Differences
So what's the biggest difference between when people do and don't report seeing something?
Across various different methods of nonconscious stimulation, a few patterns emerged. When your eyes are stimulated, areas in your visual cortex (in the back of your head) undergo activity to process it regardless of whether or not you report seeing it. When people do report something, much more of the brain "lights up". 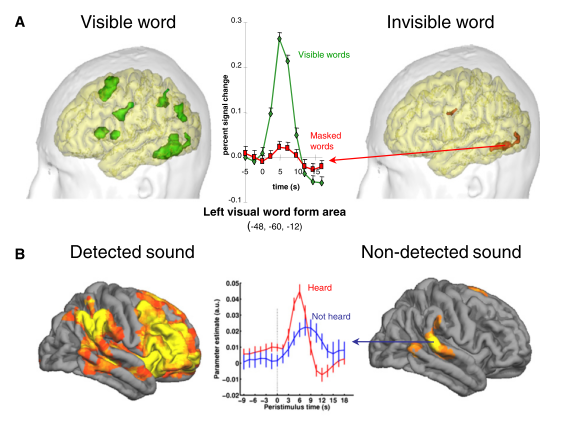 The idea that conscious access is related to recurrent processing in the frontoparietal region stands up to experimental verification. Researchers are able to interfere with conscious reports of information independently of stimulus identification simply by applying transcranial magnetic stimulation to the prefrontal cortex, without changing the stimulus.8
So basically, consciousness seems to be related to widespread neural activity in cortical areas, as well as recurrent signalling and some particular components of EEG readings. So what?
The Global Workspace Theory1,9,10
The Global Workspace Theory of Consciousness asserts that consciousness is related to information from the various specialized subregions of the brain becoming “globally available” for attention, motor control, and cognitive reference. This explains phenomena like blindsight fairly elegantly, saying that visual information in the scotoma ceases to be conscious information because it ceases to be globally available to the system. Douhane adds that neurons with long axons in the frontoparietal cortex are probably the Global Workspace.1
Baars and Dennett are fond of the theater metaphor of consciousness. There’s a spotlight of attention on the stage, and actors (specialized cortical systems) come into and out of this to play their parts. This group of interacting subagents is actually somewhat close to orthonormal's model for dissolving qualia. Behind the scenes, directors and stagehands (decision processes, attention direction, contextual systems) arrange the scenes. Everywhere we shine the spotlight we see consciousness, because consciousness is attached to the light.
No part of the system is conscious, but there’s a show going on. And that’s what we see.
Next Obvious Question:
Okay, so why does that make us talk about consciousness? Why would we use the first person?
To be continued...

A huge thanks to John Salvatier for getting me a bunch of the papers and editing feedback and putting up with my previous attempts to write an article like this. Also thanks to mtaran, falenas108, and RS (you don't know him) for reading drafts of this article.

Images are from Zeki 2003 and Dehaene 2011, respectively. I'd be very happy if someone helped me format that to show up with the pictures.

Baars, B. (1997). In the Theatre of Consciousness: The Workplace of the Mind. New York: Oxford University Press. Retrieved from here

This sentence caught me off guard. Is it supposed to be impressive that somebody predicted that conscious processing would involve activation in more regions than unconscious processing does? I would have intuitively expected this without having any precise theory of consciousness. Moreover, there are only two possibilities here; it's not like locating e=mc^2 in the space of possible equations. To see this particular prediction of Baars as exciting reminds me of the creationists who say "See? Big Bang theory says the universe has a beginning, something that Genesis predicted thousands of years ago! Science confirms the Bible!" But the universe either did or didn't have a beginning, and the fact that a religion got the right answer* there is not impressive or "awesome."

Of course, it's not clear that is the right answer, but let's suppose it is for the sake of illustrating my point. :)

Originally it was going to be a longer version of the sentence which ended up saying something to the effect of "Baars predicted this after looking at neural networks used in late-80s artificial intelligence systems" but I never found any information to support that, so I dropped the end without updating the beginning.

I had thought that because lots of GWT people mention simulations of neural nets as being related to/finding evidence for GWT.

Folks who are interested in this kind of thing might also be interested to see the Koch Lab's online demos of CFS, which you can experience for yourself if you happen to have some old-style blue-red 3D glasses kicking around. This is the method where you show an image to the nondominant eye, and a crazy high-contrast flashing stimulus to the dominant eye, and the subject remains totally unaware of the image for (up to) minutes. Pretty fun stuff :) http://www.klab.caltech.edu/~naotsu/CFS_color_demo.html

You might also be interested in Giulio Tononi's "Integrated Information" theory of consciousness. The gist is that a brain is "conscious" of features in the world to the extent that it is properly causally entangled with those features, and has represents a large amount of information about the world in a deeply entangled way. Not easy to explain in a few sentences, but it seems to me to be a deeper theory that is perhaps related to this "Global Workspace" idea. I think you can find his most well-known paper at: http://www.sciencemag.org/content/282/5395/1846.short, many more available by poking around google scholar.

Thanks for the link!

Tononi is cool in that he (at least attempted to, I haven't followed the linear algebra proof) quantified a measure for a system both having distinct functional clusters and integrated states which covary enough with external factors that they provide mutual information with them.

It seems to be in line with the "Intelligence is Compression" idea that I've run into a few times 'round these parts. I think that his theory is probably very related to intelligence (at least in human-style architectures), but not particularly related to consciousness.

I do admire his audacity in saying that anything with a high enough measure on his value is conscious.

Anil Seth has some intro/review type stuff on his work, which you can get off of his website: http://www.anilseth.com/

I can see both at the same time, and switch between different modes at will. I also tend to be immune to or see much more clearly all kinds of optical illusions and visual effects like this at various at will, or see them all the different possible ways simultaneously, able to see intuitively why things like this works, separately see "colours" like "movement speed" and "local contrast" in a way that intuitively feels like they were sent from the eyes as separate from maps of those properties that have more a feel of concious deduction and are immune to many common optical illusions, am ascribed a good aesthetic sense and artistic talent, tend to move my eyes and scroll on displays in ways that others find disturbing or even painful but I feel constrained and tunnel visioned if I try not to, I have occupationally experienced something reminiscent of blindishgt for short periods of time (remicent in the same sense as a polar opposite is), and am able to "see" things other's can't, and a bunch of other related superpowers.

Hope this is interesting enough as a case study to not come of as bragging. Feel free to run experiments on me since i love this kind of thing.