As we try to talk by Skype, Jaan Tallinn is fading in and out on my computer screen. Sitting in his living room in Estonia, he is having trouble with his connection, which may seem ironic for a co-founder of Skype, the wildly successful video chat service. But these particular technical difficulties are not Mr. Tallinn's problem these days. Since Skype was sold for $2.6 billion in 2005, making him tens of millions of dollars, he has moved on to bigger issues—like extending the span of a healthy human life and saving the species. And those are just this spring's initiatives. 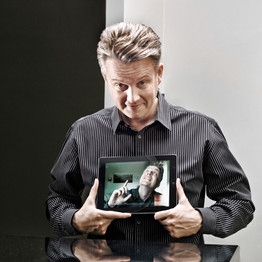 When the screen finally clears up, Mr. Tallinn comes into view. A youthful 41-years-old, with short blond bangs and fair skin, he could be a poster boy for his latest venture, MetaMed, which promises customers personalized health-care research and analysis of their medical conditions.

Health care is a relatively new focus for Mr. Tallinn, who has been interested in computer science and technology since he was 10. Born in Estonia to an architect mother and a father who directs for film and TV, he didn't get access to a computer until he was 14, when the father of one of his schoolmates selected a group of them to work in his office. There he met the friends who would eventually join him in developing Kazaa, the file-sharing application turned music-subscription service, in 2000 and then Skype in 2002.

He launched MetaMed last March after a $500,000 investment from PayPal co-founder Peter Thiel. So far, the New York-based company has about a dozen employees and 20 clients, half of them friends who are trying it pro bono. The idea emerged from another of Mr. Tallinn's goals: "surviving as a species this century." He has also been developing a new nonprofit called the Cambridge Project for Existential Risk with two academics.

What risks worry him? "The first one is artificial intelligence," he says. "The second is the things that technological progress might create that we're unaware of right now."

He has just read an early draft of a book by his friend Max Tegmark, a physicist at the Massachusetts Institute of Technology, arguing that the only reason nuclear bombs can't be made from instructions downloaded from the Internet is that the laws of physics luckily make it hard to do. "There's no guarantee that wouldn't be possible," he says, referring to homemade nuclear bombs.

His third fear is biological risk. "There could be synthetic viruses that evolution doesn't even know how to create," says Mr. Tallinn. For all practical purposes, he suggests, evolution stopped with the advent of gene technology. "The future of the planet depends much more on technology than evolution," he adds.

Having five children with his wife of 16 years has made many of these ideas more concrete for Mr. Tallinn. "When somebody goes all abstract on me ... saying things like, 'Perhaps humanity doesn't deserve to survive,' I say, 'Look, do you have kids? Do you realize you're talking about the death of your kids or my kids?" Mr. Tallinn says he's always glad to hear when technology developers have children because it makes them think in the long-term.

Glancing away from the screen to the trees outside his house, Mr. Tallinn laments that most people don't take these longer-term risks seriously.

"In general, it seems to me that people in society are bad at dealing with things that have never happened and overreact to things that have happened and happened recently," he says. As he notes, more people die slipping in the shower than in plane crashes, train accidents and terrorist attacks combined. "Since 9/11, more Americans have been killed by falling furniture than by terrorists," says Mr. Tallinn.

And these, in his view, may not be humankind's only blind spots. Mr. Tallinn is open to the possibility that our lives and consciousness are all part of a computer simulation. "As our computers and technology get better at making virtual worlds, it's reasonable to expect them to be able to create virtual worlds that are indistinguishable from the real one," he says. "So if you're in a single-history universe, with one real one and many simulations, the chances of being in the simulation are higher than the real thing."

If we are indeed living in a simulation, should we behave differently? "What we should do depends on what kind of evidence we have that we are in a simulation ... and then the critical question is why the simulation is being run." Mr. Tallinn won't say whether or not he believes we are in the real world or a computerized fake. "Once you're in a simulation you don't even know—it could be that it's not even you."

At the moment, Mr. Tallinn's virtual presence is getting fuzzy again, and his image finally fades from my screen. Calling back with his video turned off, he assures me that he is no pessimist. He looks forward to self-driving cars, which "might completely change the logistics of civilization." he says. With MetaMed, he's excited by the prospect of more advanced biomonitors. And then there's the possibility of cheap gene sequencing.

As Mr. Tallinn sees it, his career, from Skype to MetaMed to the Cambridge Project for Existential Risk, has followed a progressive arc. He recalls how he introduced himself at a recent party: "First I saved about one million human relationships," with Skype, but it "doesn't make sense to save human relationships if you don't make sure [people] live longer, and then make sure they don't get destroyed."

Please consider changing the font to the site default. As trivial as it might seem, I was much more reluctant to read this than the typical post due entirely to the font.

He has just read an early draft of a book by his friend Max Tegmark, a physicist at the Massachusetts Institute of Technology, arguing that the only reason nuclear bombs can't be made from instructions downloaded from the Internet is that the laws of physics luckily make it hard to do. "There's no guarantee that wouldn't be possible," he says, referring to homemade nuclear bombs.

Yea that's gonna be a problem once 3D printers and home biolabs get sufficiently powerful and wide-spread, it'll be the analogue to a world in which you could use a microwave and sand to make fissile material. Great Filter anyone?

See Michael Annisimov's Reconciling Transhumanism and Neoreaction for an interesting take on those risks.

And of course I'll plug my own relevant essay on the whole "there's no guarantee" thing: Don't Trust God