Join a major effective altruist fundraiser: get sponsored to eat for under $2.50 a day

Personal Blog
Join a major effective altruist fundraiser: get sponsored to eat for under $2.50 a day
Where does the money go? SCI
How do you join? - Click Here
What could you possibly eat for only $2.50 a day?
What are the rules?
Why $2.50?
Challenge Mode: live on $1.50
What if I live outside the US?
6 comments

LessWrongers who like GiveWell recommended charities may be interested in taking part in or donating to a new fundraiser called Experience Poverty. As well as deworming hundreds of children, it's an unusually good opportunity to find people who are interested in cost-effective charity and start conversations with them - something it's rare to find an excuse to do. Dozens of people and many effective altruist groups around the world are going to take part. Here are the details:

What: Spend only $2.50 a day on food for three days. Get sponsored to raise money to fight poverty.
Why: Half of the world spends $2.50 or less on food each day. This reflects income levels at which people often can’t afford basic health care. All money raised goes to buy medicines that cost only 50 cents. It is so cheap to us, but people still cannot afford it.
Who: People who want to do something to help the global poor and get a sense of what poverty's like.
When: April 22-24, 2015. If those dates don’t work for you you can set your own. For example, if you're at a US university you can choose to do it on April 6-8, when some American college groups are doing it.
What you can vary: Any of this: the amount you spend, the number of days and the date. For example, see below for the ‘challenge mode’ of spending only $1.50.
How: Sign up via these links for the US, Canada, the UK, Australia, Switzerland, Sweden and the Eurozone. Then ask friends and family to sponsor you. We’ll send you guides, pointers, and we can even do a one-on-one Skype to help you help the most people possible. Just contact us at info@charityscience.com with “Experience Poverty Skype” as the subject line.

Where does the money go? SCI

The money raised goes to the Schistosomiasis Control Initiative (SCI for short). Experience Poverty is a partnership between Charity Science and SCI. SCI gives out medicine that cures children who have parasitic worms (including those that cause the disease schistosomiasis). These parasites live inside your body and suck your blood. The effects include fatigue, bloody diarrhoea, fever, chills, and other such lovely symptoms. Rather understandably, being so ill leads to many sick days from school and work. In fact, this is why deworming is arguably one of the most cost-effective ways to give children an education, among other things (Miguel and Kremer 2004 found that it led to a 25% reduction in school absenteeism, although this is a difficult effect to pin down; for more details, see this from GiveWell).
There isn't really a single figure which gives a good sense of SCI's strength - the closest would an estimate of its cost per QALY, but I believe GiveWell sees extant estimates of this as problematic. (In our own marketing we use the figure for the cost of the drugs - around 50 cents - but this is purely to maximise the amount raised.) By far the strongest reason to raise money for SCI is that it's been picked as one of the world's most effective charities by GiveWell, the most reliable and empirical charity evaluator by a long way. For more information see GiveWell's detailed review, or Charity Science's simpler summary. 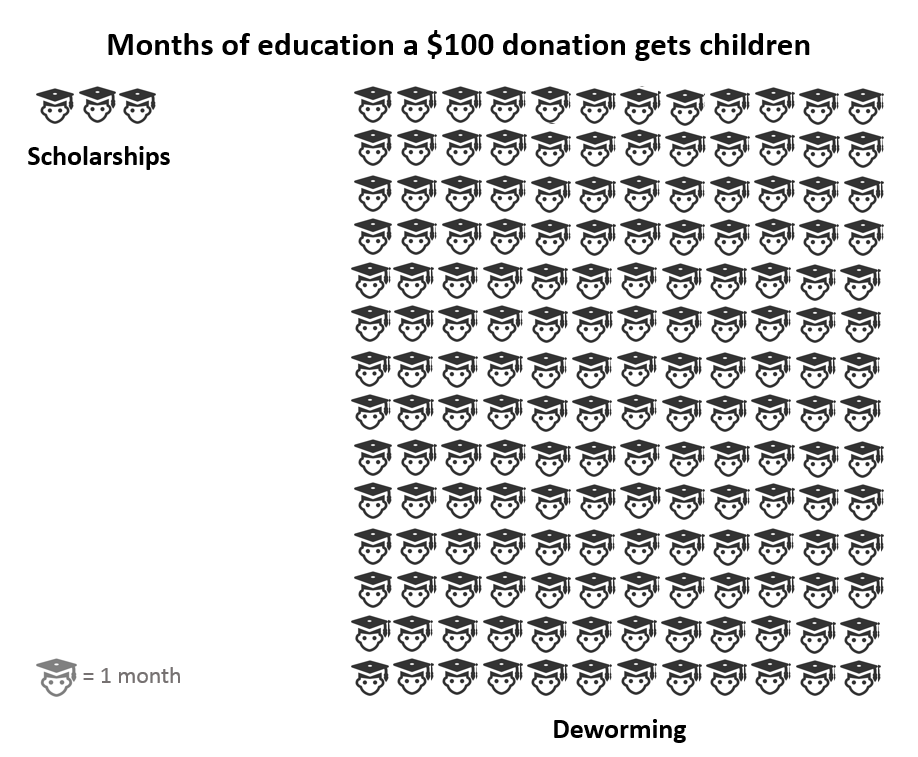 Click here then follow the prompts. You set your goal for how much you’d like to raise (we suggest setting it as $500 or more), write about why you’re doing it, and then it’s as simple as asking your friends and family to sponsor you. Most people will be touched by your dedication to helping those less fortunate and will be happy to help you out.

Or you can just donate to the campaign! 50 cents gives a treatment to a child, so just $20 treats 40 children.
If you'd like to use a currency other than US dollars, you can use our pages for Canada, the UK, Australia, Switzerland, Sweden and the Eurozone.


Not much. But that’s kind of the point. It’s to get a sense of how limiting $2.50 is. It’s like running a marathon for charity, but a lot more related.

However, it’s not all abstinence. (That’s reserved for the people taking the challenge mode who will spend only $1.50 a day.) Here’s a few cheap meals people have tried in the past:
Things you’ll have to give up:


What are the rules?

The spirit of the event involves getting a (very rough) experience of poverty, and to ultimately make it so that fewer people have to have similar experiences. As long as it is done in this spirit, do what works for you. If you need to spend a bit more money, you can set your own amount. If you can’t do it on April 22-24, do a different time. If you lapse during your three days, it’s OK. You might even want to mention it on Facebook, talking about how difficult it was. It will help people understand how hard poverty is.

You might have traveled to a poor country and know that you can buy more for $2.50 overseas. This is a good point, which is why the $2.43 figure is adjusted to how much $2.43 could buy in the USA in 2005. That’s not much. Now imagine that you have to use the remaining $1.75 per day on shelter, transport, healthcare, and entertainment. That’s why we’re running this campaign. Because that’s just too little and we want to change it.

Yawn. $2.50? You already did that in college. Well worry not my frugal friend, there is a challenge mode! $1.50 a day is roughly the international poverty line, so why not try to live on only that for 3 days?

Why do the challenge mode?

What if I live outside the US?

We have separate pages with different currencies for the following countries:
If you don’t live in any of those countries then you can either join the US page which will let your friends donate in dollars or you can email us to see if we can add your country. Donations are tax-deductible in the US and Canada and SCI will get GiftAid in the UK.
Personal Blog

I'm immediately reminded of the Live Below the Line fundraising campaign which has been popular around my area for many years now. I wonder how old this particular fundraising concept is.

Yes, LBTL actually doesn't have any GiveWell charities this year, and also charges the charities a 10% fee plus thousands up front; we don't take any cut. We're officially partnered with SCI on this and are their preferred venue.

Oh yeah, I mean, if someone had to pick between your campaign and LBTL, I think it would be a lot better if they went with yours, because obviously effective altruism is super cool and all that.

Yes, LBTL actually doesn't have any GiveWell charities this year

"this year"? Did they ever?

SCI used them some previous years.

Especially with inane sentences ("You might have traveled to a poor country and know that you can buy more for $2.50 overseas. This is a good point, which is why the $2.43 figure is adjusted to how much $2.43 could buy in the USA in 2005"), bullshit numbers ("Half of the world lives on less than $1,368 a year."), and even a picture of exotic black poor people X-/

I already spend less than $1.50 on food most days, so it might be hard to get sponsors. If anyone is interested in specifics, my diet is similar to that of these people.