Many kinds of pastry can be made vegan quite easily. Puff pastry, which is thin layers of dough and fat, works very well with various plant-based fats and pre-made puff sheets are very often vegan. Lately, however, I've been excited about choux pastry.

Choux pastry is what makes eclairs, cream puffs, and profiteroles. It's traditionally made from flour, butter, water, salt, and eggs. Using vegan butter in place of butter is not a problem, but the eggs are fundamental to the recipe. They not only provide leavening by releasing their water as steam, but they bind the dough together.

Looking online, I found various recipes that attempts to make vegan Choux pastry, but reading through them many are essentially making an enriched bread. Some go a bit farther, trying to figure out the role of eggs in choux and substitute for them, but none work very well.

I was interested in potentially using aquafaba to substitute for the eggs, but while I could make things that went into the oven very puffy, they didn't set. 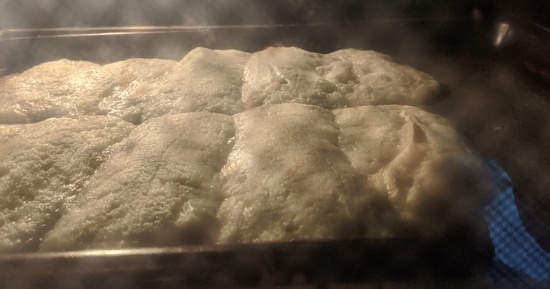 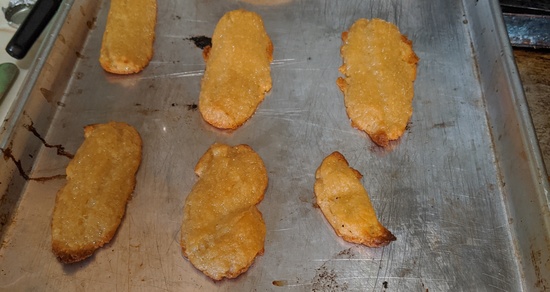 I also tried xanthan gum. Here are four, with different levels (puffier ones have more): 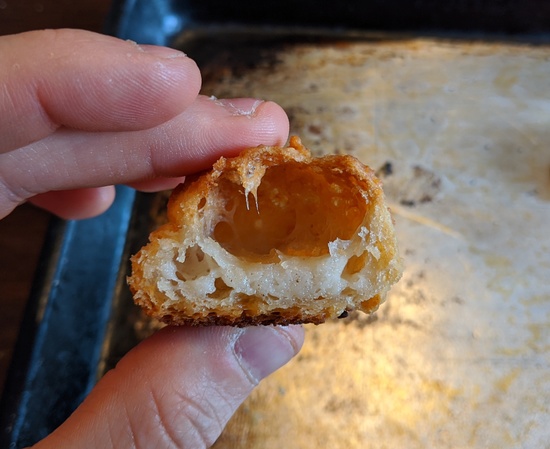 Unfortunately, amounts of xanthan gum that were sufficient to get approximately the right shape were ridiculously high, and tasted very strongly of xanthan gum. Not tasty. If you're curious:

Melt the butter in the water, and bring to a boil. Add the flour all at once, remove from the heat, and mix well. Add the baking soda and xanthan gum, mix more, and let it sit and cool.

Whip the aquafaba and cream of tartar, and mix gradually into the cooled dough, bit by bit. You'll loose most of the foam from the first bits, but it should be pretty puffy by the end. Put it on a greased baking sheet, shaping or piping. Bake at 450F until the outside is firm (??) and then cool down to 325 to bake until done through.

I wrote most of this post in the summer, describing what I tried, and I kept thinking I was going to come back and experiment more. At this point, it doesn't look like I'm going to be experimenting more, so I just wanted to publish what I had.

If you're still experimenting with this, glutinous rice flour choux is even less error prone than regular choux.