Is there a link between Immigration Policy and Inflation?

Inflation theories tend to cause a lot of debate, and the few responses I've gotten from economists on this question have been variations of "probably not". Hoping people here have access to good quality heterodox research and studies that give a slightly better answer one way or another. My Google efforts have failed so far.

The conventional position on rising inflation as I understand it is:

Something causes Aggregate Demand to rise, or Aggregate Supply to drop, or both, for some sustained period, causing an increase in prices.

This "something" could be increased money supply or some policy which raises consumption, and therefore Aggregate Demand. If production cannot keep up with this increased demand, prices rise.

Alternatively, the Monetarist view is that an increase in money supply must be matched by a simultaneous increase in productivity. Unless the economy is able to produce more with less (via technology, efficiency, labor output etc.), the value backed by each currency unit goes down, and prices rise.

Further, higher prices, or even expectations that they will stay high, can result in an inflation spiral:

The current tool to arrest this, at least in the U.S, is to raise interest rates. Which results in some combination of reducing money supply and lowering Aggregate Demand to bring prices back under control. But this often has the side affect of a recession - reducing new investment and spending (borrowing is expensive) and thereby reducing job and economic growth.

Whether or not this perfectly represents the views (I'm not an economist), there are a few variables which stand out regardless: higher wage demands and insufficient productivity.

Were there a steady influx of immigrants increasing labor supply, would it counter this increase in wage demands? Additionally if one agrees with the premise that immigrants tend to contribute across the skill spectrum and are a source of innovation, does greater immigration result in higher long-term productivity?

To do a very cursory check to see if this was reflected in some data, I looked up Immigrant Share of Population in the U.S: 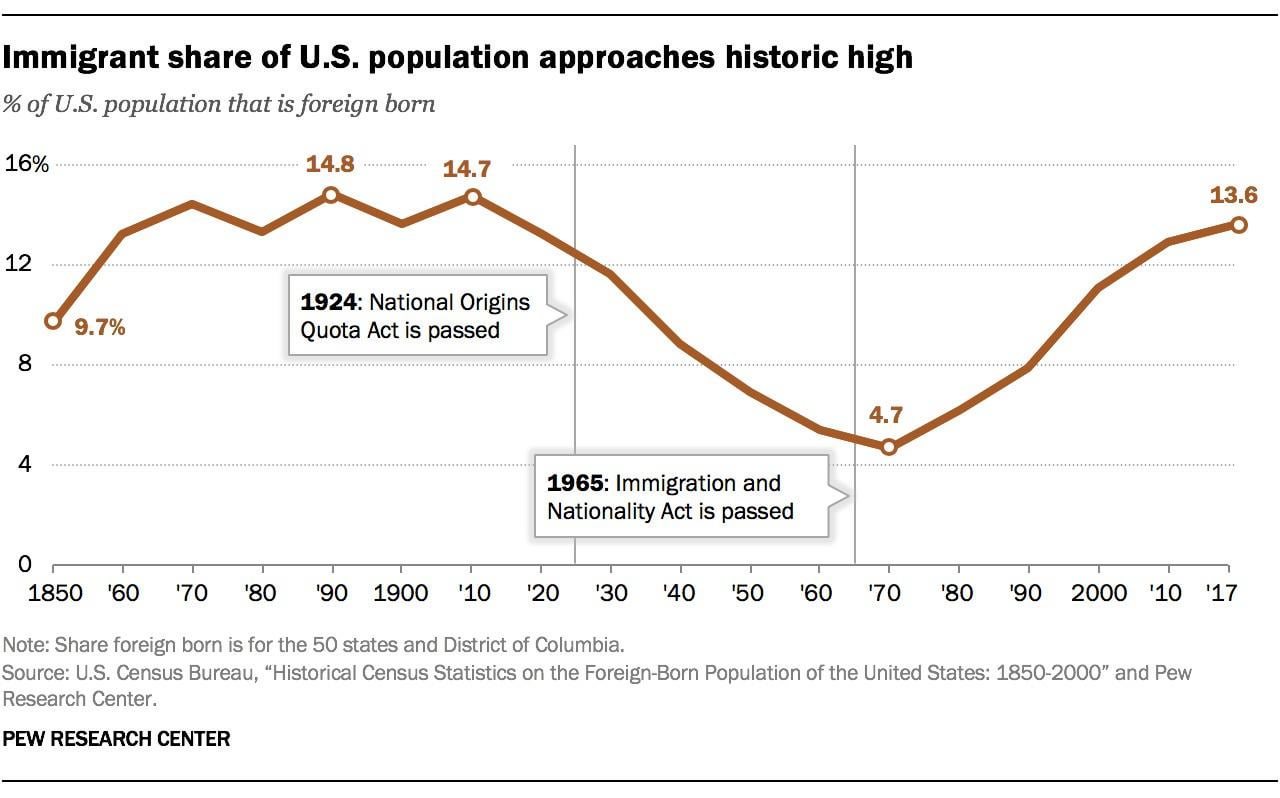 Which showed a steady decline to historic lows into the 70s inflation period. Additionally, there has been a slowing down of immigration post 2008, but especially in the last 5 years: Axios: Share of U.S. immigrant population drops for first time in 10 years: 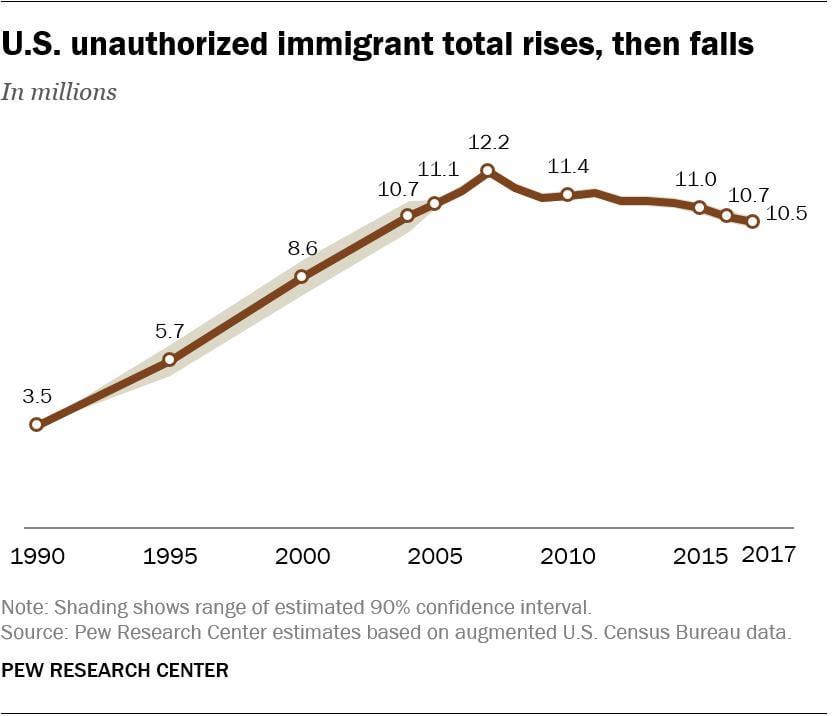 None of this of course comes close to implying causality, but I found the trends at least worthy of investigation given the hypothesis. A hypothesis which passes the initial gut check for me.

Prima facie, it seems like it would have at least some impact - yet I find no mention of immigration in discussions around causes and solutions for inflation. eg. How the Great Inflation of the 1970s Happened.

So, is there are relevant theory that looks into the link between Immigration Policy and Inflation, or studies it empirically? And if so, has any causal relationship ever been found (one direction or the other)? And has it's use as a tool to fight Inflation ever been tested?

If some supply shock (eg, hurricane destroys factories) occurs, and nothing else changes, then prices will go up.  That's not the typical cause, however.

Note also that the "inflation spiral" you mention cannot actually occur, unless the government also creates more money as it happens. One way to see this is by considering that all the money there is is owned by someone. Suppose the typical household has $1000 in the bank, which they see as a prudent reserve.  Then this "inflation spiral" starts. The value of the $1000 they have in the bank goes down, so the household will want to increase their reserve fund, and reduce spending so that they again have a prudent reserve, which will push down prices.  The inflation spiral can continue only if people are willing to have less and less of a reserve fund, which is not in accord with actual human psychology. But of course, if the government reacts to the start of such a spiral by creating more money, it can continue.

If you look at pronouncements by economists from the 1970s, you'll see lots of claims that inflation is due to such spirals, and "inflationary expectations", which need to be countered by wage and price controls.  Deep in the footnotes of the academic papers claiming this, you may see an acknowledgement that the spiral can continue only if the central bank "validates" the price increases by creating more money.  But it's assumed without much argument that that not doing so would produce a horrible recession. Which is sort of true, and happened in the US in the early 1980s, when inflation was finally stopped, since it takes people a while to recognize that they shouldn't any longer go on strike for a 10% wage increase to keep up with inflation. But the recession just gets worse the longer you wait, and also gets worse the more you propagandize the public about inflation being due to mysterious forces, rather than being a deliberate policy of the government.

So trying to see what effect immigration has on inflation is fundamentally misguided - if immigration increases supply, which one might think would reduce prices, it's entirely possible that the government will react by creating more money, undoing this effect, since they can now do so without inflation going up.

This remains my primary question i.e. I definitely wouldn't think immigration is the only thing that creates inflation. But if we think its possible that immigration can impact price, then understanding if and how it could create "inflationary pressure" or "inflationary relief" would be quite useful to understand. Even if the government undoes it with other policies.

So, did the steadily declining immigration rate in the early 20th centuary contribute to the inflation Ameirca saw in the 70s - in addition to the increase in money supply and other policies? Was that stark dip, and then rise for the latter half of the centuary purely independant coincidence, or related somehow to inflation? And if so, what role did it play? Similarly, has the recent downward trend in immigration contributed this time?

All of these seem like fairly reasonable and important questions to ask, even if we find the answer to be inconclusive or in the negative. I guess finding it mostly missing from the conversation, even as we talk about supply chains, willingness to work etc. seemed a bit odd to me.

Finally, I was a little confused by:

Deep in the footnotes of the academic papers claiming this, you may see an acknowledgement that the spiral can continue only if the central bank "validates" the price increases by creating more money.

I thought the typical response, even according to Keynesians, is to increase interest rates, therefore reducing money supply, rather than creating more money. The mechanism could be people buying more treasuries thereby removing money supply in circulation. Or people starting consuming less since borrowing rates are high - especially housing, cars etc.

While some people ask for price or wage controls, it seems like its a fairly fringe view, even amongst those considered "left leaning economists". Am I misunderstanding something here?

Allowing, say, able Mexican workers to move the US where they can be matched with appropriate capital, allowing them to be more productive, could indeed increase the productivity of the economy, which if everything else stayed the same would reduce prices. In this respect, it's similar to any sort of technical innovation, which also would tend to increase supply. But inflation or the lack of inflation can exist in an economy regardless of whether or not such productivity improvements are taking place, just due to government policy on money creation. To think of the economic effect of immigration in terms of inflation seems odd, just as it would be odd to think of the economic effect of inventing a more efficient electrical motor in terms of inflation - in both cases, it's more useful to think in terms of the effect on people's real standard of living.

"I thought the typical response, even according to Keynesians, is to increase interest rates, therefore reducing money supply, rather than creating more money."

That would be the typical response if they were actually trying to reduce inflation. Keynesians aren't totally stupid. They know perfectly well that Milton Friedman was right.  They just don't want to stop inflation.

"While some people ask for price or wage controls, it seems like its a fairly fringe view"

Price and wage controls were in fact instituted in the 1970s, in the US and in Canada.  They did not stop inflation, of course.  Inflation stopped only when the money creation stopped.