Previously I talked about an entirely uncontroversial marble game: I flip a coin, and if Tails I give you a black marble, if Heads I flip another coin to either give you a white or a black marble.

So what's analogous to the 'thirder' position, after we take into account that we have this causal information? Is it some difference in causal structure, or some non-causal anthropic modification, or something even stranger?

As it turns out, nope, it's the same exact game, just re-labeled.

And then to get the thirds, you ask the question "If I get a black marble, what is the probability of the faces of the first coin?" Now you update to P(Heads|black)=1/3 and P(Tails|black)=2/3.

Okay, enough analogies. What's going on with these two positions in the Sleeping Beauty problem? 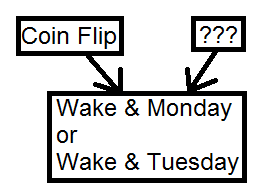 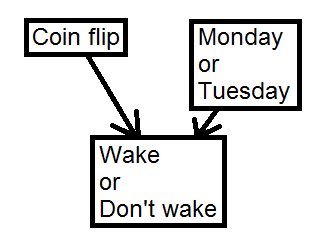 Diagram 1:  First a coin is flipped to get Heads or Tails. There are two possible things that could be happening to her, Wake on Monday or Wake on Tuesday. If the coin landed Heads, then she gets Wake on Monday. If the coin landed Tails, then she could either get Wake on Monday or Wake on Tuesday (in the marble game, this was mediated by flipping a second coin, but in this case it's some unspecified process, so I've labeled it [???]).  Because all the events already assume she Wakes, P(Heads|Wake) evaluates to P(Heads), which just as in the marble game is 1/2.

This [???] node here is odd, can we identify it as something natural? Well, it's not Monday/Tuesday, like in diagram 2 - there's no option that even corresponds to Heads & Tuesday. I'm leaning towards the opinion that this node is somewhat magical / acausal, just hanging around because of analogy to the marble game. So I think we can take it out. A better causal diagram with the halfer answer, then, might merely be Coin -> (Wake on Monday / Wake on Tuesday), where Monday versus Tuesday is not determined at all by a causal node, merely informed probabilistically to be mutually exclusive and exhaustive.

Diagram 2:  A coin is flipped, Heads or Tails, and also it could be either Monday or Tuesday. Together, these have a causal effect on her waking or not waking - if Heads and Monday, she Wakes, but if Heads and Tuesday, she Doesn't wake. If Tails, she Wakes. Her pre-Waking prior for Heads is 1/2, but upon waking, the event Heads, Tuesday, Don't Wake gets eliminated, and after updating P(Heads|Wake)=1/3.

Do these seem like accurate depictions of what's going on in these two different math problems? If so, I'll probably move on to looking closer at what makes the math problem correspond to the word problem.

Switching to a perspective in the middle of the experiment then requires the different days to be mutually exclusive and exhaustive, and conditions on waking rather than not waking.

This gives P(Heads|Wake)=1/3, but doesn't have the day as a causal node.

So, there's a few differences between these two diagrams, but they are all very similar differences. The two main ones are whether the day is an independent causal node from the coin flip, and whether not waking up on Tuesday is an event. The first difference implies the second but not vice versa, so it's the stronger condition and the second is the weaker.

I think it's not hard to answer these questions. But I also want to develop guidelines for what to do in other problems.

Here is what I consider a slam dunk against diagram 1: Before the experiment, what is Sleeping Beauty's probability that on Tuesday, she doesn't wake up? 1/2.

If she has a probability for this thing, she must be representing it as an event. This is that second difference I mentioned. In fact, the whole reason the probability changes upon waking in diagram 2 is because this non-waking option gets eliminated and its probability mass evenly redistributed.

If diagrams 1 and 2 were the only two options, this would sort of be the end - but they're not, they're just two diagrams that we promoted to attention by some other process. We want to be able to help out the intuitive process that fits these causal models to this story problem.

The categories to keep track of are the possible events, the causal structure, and the constraints on the various nodes (at least for simple problems like this where those things don't change based on observations).

Hmm, maybe one can't eliminate the [???] node. This is because non-causal-diagram information, such as observations, is conditioned on for all nodes, in the ordinary non-causal-diagram way. So the information encoded in diagram 1 really is causal, even if it's unphysical. One could interpret this as a heuristic argument against diagram 1 - no unphysical causal nodes.

If all coin flips are treated the same, this forces the decision to be made by some other sort of initial conditions. And it is a peculiarity of the Sleeping Beauty problem that this would be unphysical for diagram 1 - if we go back to the marble game, there's any number of physical processes that work.