Personal Blog
SIA, conditional probability and Jaan Tallinn's simulation tree
SIA does not (directly) predict large populations
Once you know how all about yourselves, SIA is powerless
Jaan Tallinn's tree
Conclusion
3 comments

If you're going to use anthropic probability, use the self indication assumption (SIA) - it's by far the most sensible way of doing things.

Now, I am of the strong belief that probabilities in anthropic problems (such as the Sleeping Beauty problem) are not meaningful - only your decisions matter. And you can have different probability theories but still always reach the decisions if you have different theories as to who bears the responsibility of the actions of your copies, or how much you value them - see anthropic decision theory (ADT).

But that's a minority position - most people still use anthropic probabilities, so it's worth taking a more through look at what SIA does and doesn't tell you about population sizes and conditional probability.

This post will aim to clarify some issues with SIA, especially concerning Jaan Tallinn's simulation-tree model which he presented in exquisite story format at the recent singularity summit. I'll be assuming basic familiarity with SIA, and will run away screaming from any questions concerning infinity. SIA fears infinity (in a shameless self plug, I'll mention that anthropic decision theory runs into far less problems with infinities; for instance a bounded utility function is a sufficient - but not necessary - condition to ensure that ADT give you sensible answers even with infinitely many copies).

But onwards and upwards with SIA! To not-quite-infinity and below!

One error people often make with SIA is to assume that it predicts a large population. It doesn't - at least not directly. What SIA predicts is that there will be a large number of agents that are subjectively indistinguishable from you. You can call these subjectively indistinguishable agents the "minimal reference class" - it is a great advantage of SIA that it will continue to make sense for any reference class you choose (as long as it contains the minimal reference class).

The SIA's impact on the total population is indirect: if the size of the total population is correlated with that of the minimal reference class, SIA will predict a large population. A correlation is not implausible: for instance, if there are a lot of humans around, then the probability that one of them is you is much larger. If there are a lot of intelligent life forms around, then the chance that humans exist is higher, and so on.

In most cases, we don't run into problems with assuming that SIA predicts large populations. But we have to bear in mind that the effect is indirect, and the effect can and does break down in many cases. For instance imagine that you knew you had evolved on some planet, but for some odd reason, didn't know whether your planet had a ring system or not. You have managed to figure out that the evolution of life on planets with ring systems is independent of the evolution of life on planets without. Since you don't know which situation you're in, SIA instructs you to increase the probability of life on ringed and on non-ringed planets (so far, so good - SIA is predicting generally larger populations).

And then one day you look up at the sky and see: 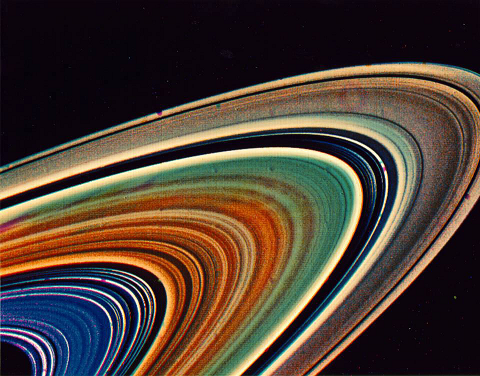 After seeing this, SIA still increases your probability estimate for large populations on ringed planets - but your estimate for non-ringed planets reverts to the naive baseline. SIA can affect variables only as much as they are correlated with the size of the minimal reference class - as variables become more independent of this, SIA's effect becomes weaker.

Once you know how all about yourselves, SIA is powerless

Designate by P the naive probability that you might have, before considering any anthropic factors. Let PSIA be the anthropic probability, adjusted by SIA. If N is a random variable that counts the size of the minimal reference class, then SIA's adjustment for any random variable X is:

This is just rephrasing the fact that we weight the worlds by the size of the minimal reference class. The normalization term "Norm" is simply a constant that divides all PSIA probabilities to ensure they sum to 1 after doing the above adjustment (Norm is equal to the expected value of N). If X is independent of N (and hence P(X=x) doesn't have any anthropic correction from SIA, and equals PSIA(X=x)), then conditional probability follows the rule:

If X isn't independent of N, then PSIA(X=x) is not necessarily the same as P(X=x), and the above equality need not hold. In most cases there will still be an anthropic correction, hence:

So if we condition on the size of our reference class, there are no longer any anthropic effects.

I myself was somewhat confused by this (see here and here). But one implication is that, if you know the past human population, you expect the current human population to be above trend. Ditto if you know the future population: you then expect the current population to be higher than that information would naively imply (this gives you a poor-man's Doomsday argument). But if, on the other hand, you know your current population, then you expect future and past populations to be given by naive probabilities, without anthropic adjustment.

To illustrate this counterintuitive idea, take a toy model, with three populations at three steps (entitled "past population", "present population" and "future population"). Imagine that the past population was 3, and that the population either goes up by one, goes down by one, or stays the same, with equal (naive) probability. So we now have nine equally probable population series: (3,2,1), (3,3,3), (3,4,4), (3,4,5), etc...

If you haven't already, go an watch Jaan Tallinn's presentation. It's beautiful. And don't come back until you're done that.

Then if we asked "if we are simulated, where are we likely to exist in this tree process?", then SIA gives you a clear answer: at the final stage, just before the singularity. Because that's where most of the simulated beings will exist.

But the real question is "if we are simulated, then given that we observe ourselves to be at a certain stage of human civilization, how likely is it that we are at the final stage?" This is a subtly different question. And we've already seen that conditioning on variables tied to our existence - in this case, our observation of what stage of civilization we are at - can give very different answers from what we might expect.

To see this, consider five different scenarios, or worlds. W1 is the world described in Jaan Tallinn's talk: a branching process of simulations, with us the final stage before the singularity. In our model, it has eight civilizations at the same stage as us. Then we have world W2, which is the same as W1, except that there's still another stage remaining before the singularity: we add extra simulations at a date beyond us (which means that W2 contains more simulations that W1). Then we have W3, which is structurally the same as W2, but has the same total number of simulations as W1. The following table shows these worlds, with a dotted rectangle around civilizations at our level of development. Under each world is the label, then a row showing the number of civilizations at our level, then a row showing the number of civilizations at every stage. 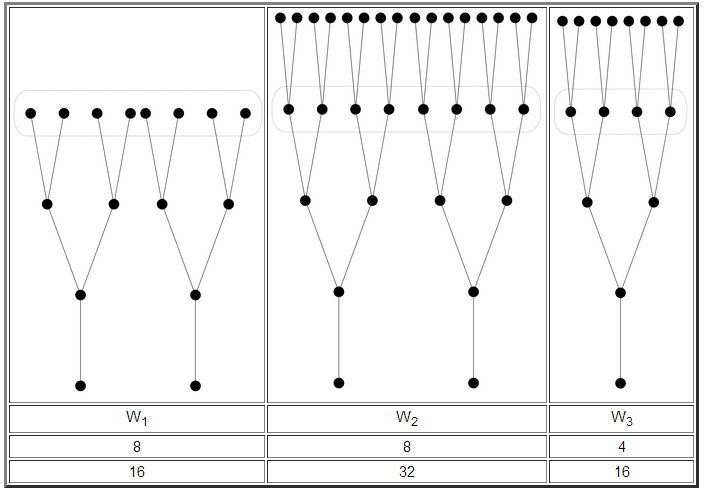 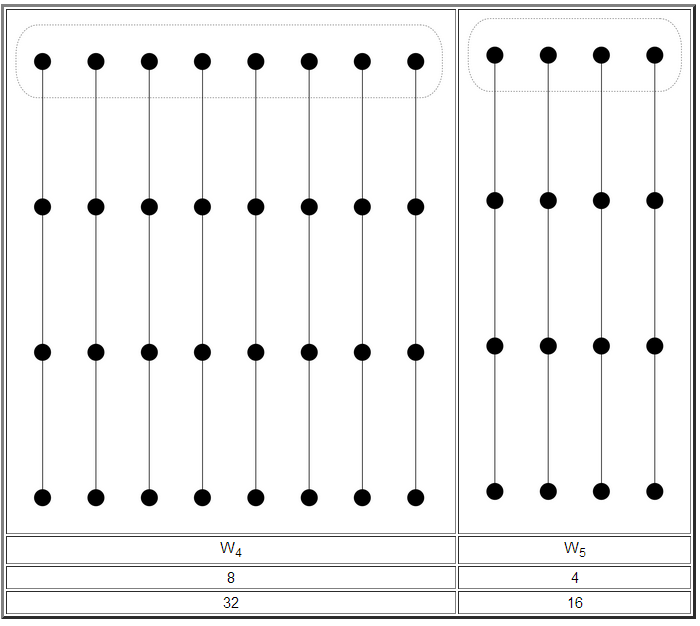 What is the impact of SIA? Well, it decreases the probabilities of worlds W3 and W5, but leaves the relative probabilities of W1, W2 and W4 intact. So if we want to say that W1 is more likely than the others - that we are indeed in the last stages of a simulation tree search - we can only do so because of a prior, not because of SIA.

Is this enough? Not quite. Our priors need to do still more work before we're home and dry. Imagine we had a theory that superintelligences only simulated people close to the singularity, and used general statistical methods for the previous history. This is the kind of world that would score highly by SIA, while still having a low total population. So we better make them very unlikely a priori, lest they swamp the model. This is not an unreasonable assumption, but is a necessary one.

So far, we've been using "total population at our current era" as a constant multiple of N, the size of the minimal reference class, and using the first as a proxy for the second. But the ratio between them can change in different worlds. We could imagine a superintelligence that only produced human civilizations. This would get a tremendous boost by SIA over other possibilities where it has to simulate a lot of useless aliens. Or we could go to the extreme, and imagine a superintelligence dedicated manically to simulating you, and only you, over and over again. Does that possibility feel unlikely to you? Good, because our extreme prior unlikelyhood is the only thing from preventing SIA blowing that scenario up until it dominates all other possibilities.

So anthropic reasoning is subtle, and especially when we are conditioning on facts relevant to our existence (such as observations in our world), we need to follow the mathematics rather than our intuitions - and count on our priors to do a lot of the heavy lifting. And avoid infinity.

Jaan Tallinn's talk is amazing... The link to that alone is worth the upvote.

I'm struck by Jaan's proposal that super intelligences will try to simulate each others' origins in the most efficient way possible, which Jaan describes as for "communication purposes", though he may be thinking of acausal trade. I had similar thoughts a few months ago in comments here and here.

One fly in the ointment though is that we seem to be a bit too far away from the singularity for the argument to work correctly (if the simulation approach is maximally efficient, and the number of simulants grows exponentially up to the singularity, we ought to be a fraction of a second away, surely, not years or decades away). Another problem is how much computational resource the super intelligences should spend simulating pre-singularity intelligences, as opposed to post-singularity intelligences (which presumably they are more interested in). If they only spend a small fraction of their resources simulating pre-singularitarians, we still have a puzzle about "why now".

Origins are important - if what you want to do is understand what other superintelligences you might run into.

Jaan Tallinn argues that superintelligences will simulate their origins because they want to talk to each other. My proposal from 2011 is that superintelligences will simulate their origins in order to avoid their civilization being eaten by expansionist aliens. I can't say I endorse Tallinn's deism, though.