World Optimization
Frontpage
Does NASA Take Alien Life Seriously?
Preventing Alien Invasions
What these Categories Mean
Confusion 1: Where are the "Interesting" and "Very Interesting" bodies?
Confusion 2: Why is Mars on the same level as Europa and Enceladus?
7 comments

This post was inspired by recent media stories about UFOs (now rebranded as UAPs by the Very Serious People) and an episode of Neil Degrasse Tyson's Cosmos: Possible Worlds I watched on a Delta flight. Also this might look like a post about ETs but it's actually about institutional epistemic bias.

One of the job titles at NASA is "Planetary Protection Officer." 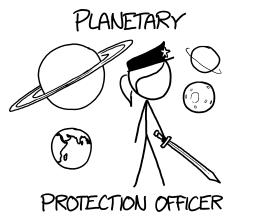 The job description does not include fighting off aliens with high-concept science-fiction weapons[1]. The primary responsibility is to prevent Earth's scientific equipment from contaminating other heavenly bodies with microbial life or organic molecules. This is good science: If we find any evidence of life or its chemical precursors in space, we want to be sure that we aren't actually "discovering" stowaways from Earth brought by our own probes. It's also good conservationism: NASA has no desire to mess with possible ecosystems on other planets by introducing new species. The possibility of biological hitchhikers returning through Earth via sample return missions and then harming us is comparatively remote, but appropriate precautions are also taken for these types of missions.

From the NASA webpage about Planetary Protection:

Planetary Protection requirements for each mission and target body are determined based on the scientific advice of the Space Studies Board and on NASA or international policy guidelines. Each mission is categorized according to the type of encounter it will have (e.g., flyby, orbiter or lander) and the nature of its destination (e.g., a planet, moon, comet or asteroid). If the target body has the potential to provide clues about life or prebiotic chemical evolution, a spacecraft going there must meet a higher level of cleanliness and some operating restrictions will be imposed. Spacecraft going to target bodies with the potential to support Earth life must undergo stringent cleaning and sterilization processes and greater operating restrictions.

The episode of Cosmos that I watched mentioned this classification system and piqued my interest, so I read the page. There are five categories. Below are layperson-accessible summaries (based on my understanding) and examples of destination planets that would place missions in a particular category (taken directly from NASA).

What these Categories Mean

From what I can tell, NASA thinks about objects in the solar system in essentially three levels of "interesting", where "interesting" here means "containing extinct or extant life or prebiotic chemistry or evidence thereof."

I first Noticed I Was Confused when Neil Degrasse Tyson's narration of Cosmos explained that Mars, Europa, and Enceladus where all in the "Possibly interesting" grouping. I had two points of confusion.

The short answer is that, in our solar system at least, they don't exist (other than Earth, which is left out of the categories for obvious reasons). I consider this a deficiency of the classification system: Suppose we landed on Europa tomorrow, drilled under the ice, and discovered a society of tentacled creatures holding a banner that said "Welcome Earthlings!" In this case it would be absolutely critical not to introduce new and potentially harmful life to Europa, but we wouldn't have a new category to distinguish the appropriate amount of caution. We could simply make one, of course, so this doesn't bother me as much as the next confusion. Still, if I were making the categories used by planetary protection, there would be some level for bodies that we definitely know or strongly suspect have extant life, so that we are extremely careful to not to allow contamination in either direction.

Confusion 2: Why is Mars on the same level as Europa and Enceladus?

Previous study of Europa and Enceladus have convinced NASA that both contain large, subs-surface bodies of liquid water, and likely also have hydrothermal vents. Mars, from what we know, most likely has neither (though could have in its past). I'm no astrobiologist, but since hydrothermal vents have been described as ideal conditions for the origin of life, and liquid water is critical for all forms of life as we know it, I consider the origin and present existence of life in our solar system to be much more likely on either of these moons than on Mars. So wouldn't it be appropriate to be more cautious for (as of now hypothetical) missions to Europa and Enceladus?

I'll admit the answer to this question could plausibly be "no." I see two ways this is possible:

What I think is more likely though, knowing about other evidence that NASA doesn't consider alien life seriously[2], and how looking for alien life is associated with low status, is that institutional culture at NASA discourages voicing confusions like mine. If you're behaving as if you expect to find alien life, you're clearly not a serious scientist.

But by default, if you are not expecting to find something, you must expect to not find it. I am thus concerned that NASA, or perhaps the space-exploration-and-scientific-industrial-complex more generally, is and will be resistant to accept evidence of extraterrestrial life. For an organization supposed to be oriented toward discovery, this is not a good bias to have.

I work at JPL in life detection. We definitely take the search for alien life seriously. Speaking personally, not in any official JPL capacity:
Regarding the relative probability of finding life of Europa/Enceladus vs Mars, some of the thinking has to do with how long water has existed (or did exist) on the body and how much energy is dumped into the system for a potential ecosystem to use. Given that, in order of decreasing probability of an ecosystem existing (past or present): Mars, Europa, Enceladus. Mars we're actively looking at of course. Europa has many engineering challenges to overcome ( high radiation for instance). Enceladus is currently attractive because we have evidence of water ice geysers and might be able to fly through them to gather sample.

I am very glad to hear this, and I didn't know that JPL even did life detection! Thank you for commenting.

Not to Fanboy or anything, but concerning :

Enceladus is currently attractive because we have evidence of water ice geysers and might be able to fly through them to gather sample.

...the engineering challenges of that sound so cool to think about solving.

Ha. Hypervelocity capture has a tendency to destroy a lot of what might be interesting. For instance, one of the biosignatures we’re hoping to find are distributions of chiral amino acids that are indicative of life. Ideally we would find mostly “left handed” or mostly “right handed” forms of the amino acids in a sample as opposed to a 50:50 distribution. This would be a very strong piece of evidence in favor of the ‘biochemistry’ hypothesis. My understanding is that an orbiter will be traveling so fast as it passes through the geysers that amino acids will be broken into their constituent atoms as they’re “captured”. We’ve looked at ways of capturing them using something like an aerogel surface but more research needs to be done.

Regarding the earlier question of planetary protection, I can elaborate a bit on this process as well as we work with them a lot. Ensuring something is sterile is non-trivial. The easiest way is to simply heat it to some temperature we know kills virtually all life on earth. Depending on the systems in your probe though, it’s unlikely you can simply cook it and have it still work. Some things can be irradiated. But there are edge cases like photodetectors that can’t handle either method. For these, you can often use methods such as a vapor hydrogen peroxide, but this is a surface treatment and is probably insufficient for longer term missions to subsurface oceans.

Ha. Hypervelocity capture has a tendency to destroy a lot of what might be interesting...

...an orbiter will be traveling so fast as it passes through the geysers that amino acids will be broken into their constituent atoms as they’re “captured”. We’ve looked at ways of capturing them using something like an aerogel surface but more research needs to be done.

So is the idea then to expect break down of the samples and to attempt to 'capture' the process of the amino acids breaking down with something like a simplified CERN particle accelerator style advanced sensor array combined with the aerogel capture?  Or are you actually expecting to get the samples without them being annihilated? Either way sounds ridiculously difficult.

Maybe a suppressor of sorts, like the kind used to silence the launch of a munition or firing of a bullet could dampen some of the impact of sample capture. A series of aerogel coated baffles to help with micro-progressive deceleration or something.

Is it possible to drop a smaller decelerating capture device to capture the sample and then have it recaptured by the orbiter on a subsequent orbit, or is it a one pass deal using the gravity of the planetary body to slingshot the samples back to Earth?

Ensuring something is sterile is non-trivial.

Is the use of something like anti-mircrobial coatings not really possible? Considering the amount of atmosphere an orbiter might encounter, I can imagine any coatings might just burn off.

Depending on the systems in your probe though, it’s unlikely you can simply cook it and have it still work.

But the 'burn it with fire' approach is so attractive.

...but this [vapor hydrogen peroxide] is a surface treatment and is probably insufficient for longer term missions to subsurface oceans.

So is the concern then that between the surface treatment of the orbiter, and launch, there is still room for microbial contamination? This seems to argue for something like SpaceX's orbital refueling concept, maybe with a vapor hydrogen peroxide treatment before final preparation for the long trip.

Thanks for the post. I was unaware a Planetary Protection Officer was even a thing and the title is a bit...something. Obviously it sounds a bit much, but in reality it also ironically seems pretty reasonable. I wonder what the protocols for resource sharing are between the PPO and Space Force.

Additionally, the classification system seems odd for another reason although you did mention for a Category IV mission

There are a few sub-categories for this depending on what kind of experiments are planned or if they travel to "Martian Special Regions" where Martian life is most likely to be and/or Earth life is likely to survive.

This latest mission to Mars, the rover Perseverance, is actually setup to prepare samples of Martian material to be returned to Earth by subsequent missions. Wouldn't that technically qualify this mission for a designation of a Category V? Considering Perseverance is acquiring and preparing the samples for return, although not returning them, it is still coming into contact with material that has the potential to become contaminated.

An interesting point. I'm very unsure of this, but I think that the main difference between IV and V is that V includes measures to prevent introduction of Martian life to Earth. The mission to collect the prepared samples would certainly be a category V according to my understanding. Perhaps the crew or lander collecting the samples would first have to do some sort of examination, assuming Perseverance hadn't already?