Around here, calibration is mostly approached on a discrete basis: for example, the Technical Explanation of Technical Explanations talks only about discrete distributions, and the commonly linked tests and surveys are either explicitly discrete or offer only coarsely binned probability assessments. For continuous distributions (or "smooth" distributions over discrete quantities like dates of historical events, dollar amounts on the order of hundreds of thousands, populations of countries, or any actual measurement of a continuous quantity), we can apply a finer-grained assessment of calibration.

The problem of assessing calibration for continuous quantities is that our distributions can have very dissimilar shapes, so there doesn't seem to be a common basis for comparing one to another. As an example, I'll give some subjective (i.e., withdrawn from my nether regions) distributions for the populations of two countries, Canada and Botswana. I live in Canada, so I have years of dimly remembered geography classes in elementary school and high school to inform my guess. In the case of Botswana, I have only my impressions of the nation from Alexander McCall Smith's excellent No. 1 Ladies' Detective Agency series and my general knowledge of Africa.

For Canada's population, I'll set my distribution to be a normal distribution centered at 32 million with a standard deviation of 2 million. For Botswana's population, my initial gut feeling is that it is a nation of about 2 million people. I'll put 50% of my probability mass between 1 and 2 million, and the other 50% of my probability mass between 2 million and 10 million. Because I think that values closer to 2 million are more plausible than values at the extremes, I'll make each chunk of 50% mass a right-angle triangular distribution. Here are plots of the probability densities: 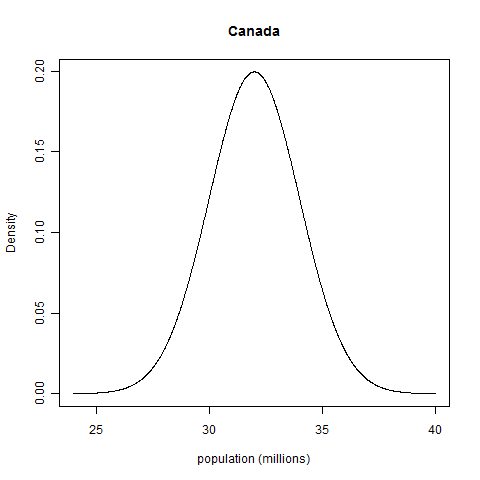 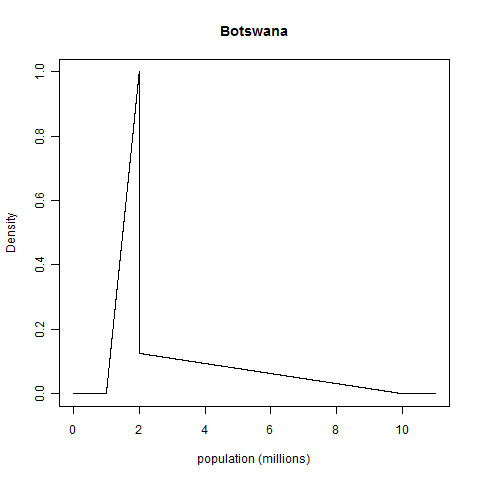 (These distributions are pretty rough approximations to my highest quality assessments. I don't hold, as the above normal distribution implies, that my probability that the population of Canada is less than 30 million is 16%, because I'm fairly sure that's what it was when I was starting university; nor would I assign a strictly nil chance to the proposition that Botswana's population is outside the interval from 1 million to 10 million. But the above distributions will do for expository purposes.)

For true values we'll take the 2009 estimates listed in Wikipedia. For Canada, that number is 33.85 million; for Botswana, it's 1.95 million. (The fact that my Botswana estimate was so spot on shocked me.) Given these "true values", how can we judge the calibration of the above distributions? The above densities seem so dissimilar that it's hard to conceive of a common basis on which they have some sort of equivalence. Fortunately, such a basis does exist: we take the total probability mass below the true value, as shown on the plots below. 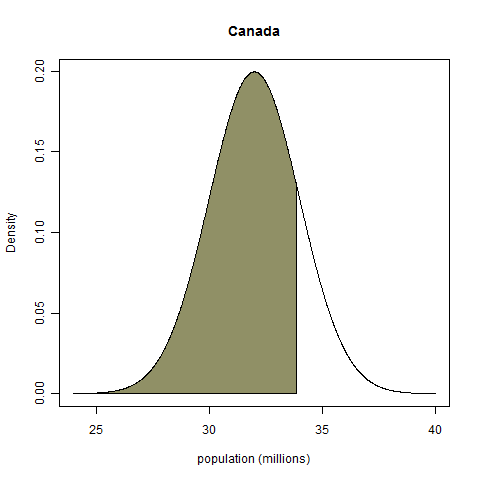 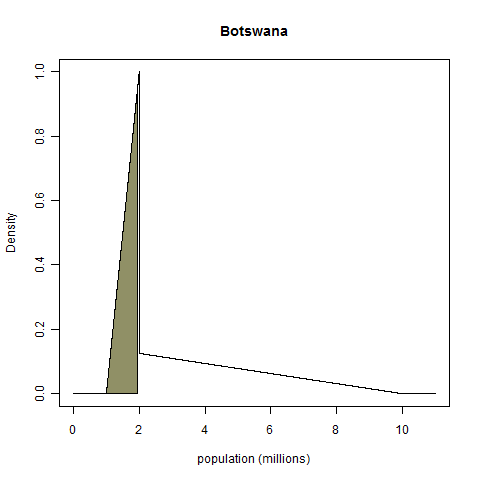 If we have a large collection of probability distributions and realized values, we can assess the calibration of those distributions by checking to see if the distribution of PIT values is uniform, e.g., by taking a histogram. For correctly calibrated distributions, such a histogram will look like this: 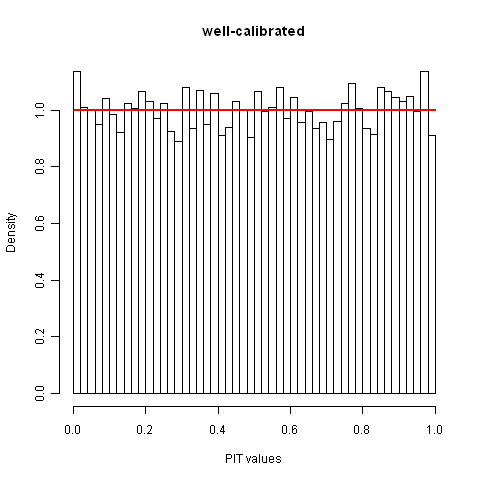 The above histogram and the ones below show 10,000 realizations; the red line gives the exact density of which the histogram is a noisy version.

Figuring out that your distributions are systematically biased in one direction or another is simple: the median PIT value won't be 0.5. Let's suppose that the distributions are not biased in that sense and take a look at some PIT value histograms that are poorly calibrated because the precisions are wrong. The plot below shows the case were the realized values follow the standard normal distribution and the assessed distributions are also normal but are over-confident to the extent that the ostensible 95% central intervals are actually 50% central intervals. (This degree of over-confidence was chosen because I seem to recall reading on OB that if you ask a subject matter expert for a 95% interval, you tend to get back a reasonable 50% interval. Anyone know a citation for that? ETA: My recollection was faulty.) 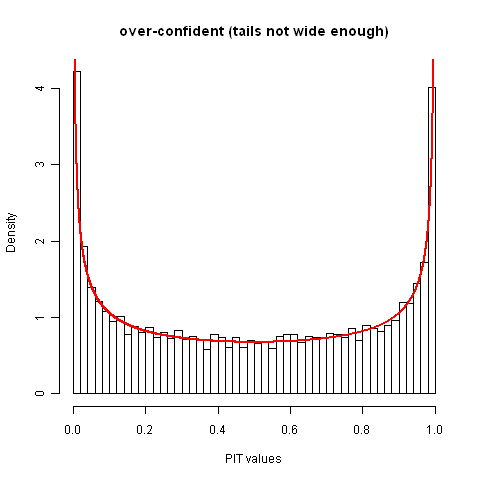 We need not use coarse binning to check if a collection of distributions for continuous quantities is properly calibrated; instead, we can use the probability integral transform to set all the distributions on a common basis for comparison.

1 It can be demonstrated (for distributions that have densities, anyway) using integration by substitution and the derivative of the inverse of a function (listed in this table of derivatives).

You shouldn't need to do any integrals to show that the PIT gives a uniform distribution. Suppose Pr(X <= x) = p; then (assuming no jumps in the cdf) the PIT maps x to p. In other words, writing P for the random variable produced by the PIT, Pr(P <= p) = p, so P is uniform.

Yup, that works. I would only caution that "assuming no jumps in the cdf" is not quite the right condition: singular distributions (e.g., the Cantor distribution) contain jumps, and the PIT works fine for them. The correct condition is that the random variable not have a discrete component.

Pr(X <= x) is an integral, but I find this explanation clearer than the one in the OP. Upvoted.

This degree of over-confidence was chosen because I seem to recall reading on OB that if you ask a subject matter expert for a 95% interval, you tend to get back a reasonable 50% interval. Anyone know a citation for that?

Not exactly; but you might be thinking of asking students for 99% intervals instead. That result was quoted in Planning Fallacy, which also lists the original sources.

That might be it, but the memory that swirls foggily about in my mind has to do with engineers being asked to give intervals for the point of failure of dams...

There is a result in Cognitive biases potentially affecting judgement of global risks, p. 17, which is about intervals given by engineers about points of dam failure. It really doesn't make your claim, but it does look like the kind of thing that could be misremembered in this way. Quoting the relevant paragraph:

Similar failure rates have been found for experts. Hynes and Vanmarke (1976) asked seven internationally known geotechical engineers to predict the height of an embankment that would cause a clay foundation to fail and to specify confidence bounds around this estimate that were wide enough to have a 50% chance of enclosing the true height. None of the bounds specified enclosed the true failure height. Christensen-Szalanski and Bushyhead (1981) reported physician estimates for the probability of pneumonia for 1,531 patients examined because of a cough. At the highest calibrated bracket of stated confidences, with average verbal probabilities of 88%, the proportion of patients actually having pneumonia was less than 20%.

Yup, I think the two links you found explain my misremembered factoid.

Very useful considering that many variables can be approximated as a continous with a good precision.

I agree with you. The bolded "or" in the quoted sentence below was accidental (and is now corrected), so this misunderstanding is likely my fault. The other "or" is an inclusive or.

"smooth" distributions over discrete quantities like dates of historical events, dollar amounts on the order of hundreds of thousands, or populations of countries, or any actual measurement of a continuous quantity

Note the similarity between PIT values and bits. If you have a good model of a data set and use it to encode the data, then the bit string you get out will be nearly random (frequency of 1s=50%, freq. 10s=25%, etc.) Analogously when you have a good model then the PIT values should be uniform on [0,1]. A tendency of the PITs to clump up in one section of the unit interval corresponds to a randomness deficiency in a bit string.