It's a bit weird to be writing a retrospective for an event that didn't take place, but there was still a lot of planning and organizing, both before and after the decision to cancel.

The week after Beantown Stomp 2019 finished I started thinking about 2020. I suggested it to the BIDA board, and people were positive. I checked with the hall, who had the weekends of 2020-03-14 and 2020-03-21 available, and they penciled us in. I checked with other events to make sure we didn't have conflicts, and both weekends looked good. In early April I booked Dereck Kalish to come back for sound, and started writing to bands and callers. The weekend of 3/21 was better for performers, so in late April I confirmed with the hall and sent out a save-the-date.

Then in early June the organizers of DEFFA let me know that the school where they hold their event needed to move them from 3/28 to 3/21. While the two events don't have that much overlap and I wasn't worried that we'd have too few dancers to make the weekend worth it, I was concerned about DEFFA's attendance. Additionally, one of the musicians we had booked had already committed to play at DEFFA.

Our hall happened to still have the 3/14 weekend available, and I started talking to performers to see if we could switch, but by this time they had enough conflicts that moving wasn't going to work. After getting advice from a lot of people and talking more to the DEFFA organizers I decided to go ahead with the 3/21 weekend.

In March I had started talking to the JP organizers about whether they would be interested in co-sponsoring again for 2020, and initially they were too busy organizing their own late-Spring weekend to decide. Which was fine; I didn't need a decision from them until it was time to start publicity in the fall. In late June they decided they did want to co-sponsor.

At this point we had a date, hall, bands, callers, and sound, so I didn't do much until the fall.

In late September I started trying to put together a committee. Long term I think Stomp should be run by a committee, but when starting things up a "one person just does things" approach had been lower friction. I talked to several people who had been helpful in 2019 and had expressed interest in maybe organizing, and ended up with five people: me, Persis Thorndike, Sarah Hirsch, John Hawley, and Ruthan Freese. I made us a mailing list to talk on, and put together a checklist of everything I thought needed to happen:

With the new committee we had good discussions about budget, capacity, pricing, and registration. We decided to try a "hybrid lottery" registration where if we sold more than half the tickets in the first week we'd pause registration and plan a lottery for the rest.

In mid November we opened registration and we got 122 registrations in the first week. The speed at which initial registrations came in, combined with that it took us a few days to confirm with everyone, made me realize that the hybrid lottery idea was silly. For future years I'd like us to announce that we would start processing registrations on a certain date, and any registrations made before then would be given equal priority.

We handled registrations the same way as in 2019, except that as registrar Ruthan did most of the work. I still collected the checks and took electronic payments, but she did all the communicating with people. We made another email alias which we CC'd on all registration-related communication, to spare the other committee members from the mess of emails.

In January some band aspects started to firm up. Jesse Ball was booked for both DEFFA and Stomp, and I was fine with him prioritizing his DEFFA commitment. We ended up deciding that his band, Calluna, would play Saturday morning only, and that he'd be done by 1:15pm at the latest. This made some additional room, so I asked Julie Metcalf and Max Newman to play some as a duo and anchor the open band. Another of our musicians had been having health issues and had realized they wouldn't be able to play, and we were coordinating around subs.

In early February I started to put together a schedule. I wrote a draft, and shared it with everyone for feedback. Amazingly, no one asked for changes, so this was pretty painless.

In mid February Sarah started sending out emails to coordinate housing and transportation, starting with performers.

Around this time Ruthan started following up with people who had registered but not paid, and we realized we had a small problem. Most checks were mailed to my house where I marked the person as paid, and then I brought them to the dance where the hall manager included them in the deposit but not the night's total. A few people brought their checks to the dance directly, however, and these accidentally got treated like the checks I brought, which meant that we weren't marking the person down as paid. While we could have sorted this out from our bank statements this would have been enough work that we decided to include a note on our follow-ups: "if you have already paid, either by Venmo or by bringing your check to a BIDA dance, please let us know so we can update our records accordingly." 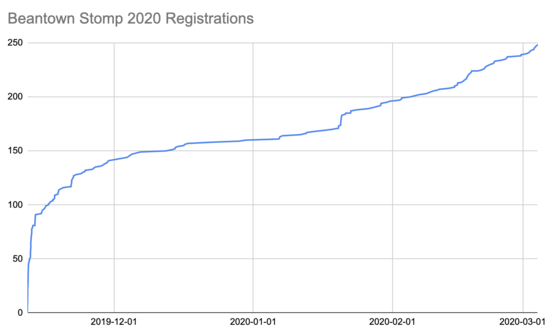 Registrations continued to come in, and we were just about at capacity when I started paying attention to the coronavirus and realized this might be a problem for Stomp. I wrote to the hall to start working on a 2021 date, because if we cancelled we wanted to be able to tell people when the next time would be. For the regular 3/1 BIDA dance we decided to go ahead but implement mandatory handwashing. I did a bit of multiplication and figured that at 1,000 uses per gallon a weekend of 250 people would go through about four gallons of hand sanitizer, and ordered eight gallons to be sure.

The covid-19 situation escalated very quickly. On 3/4 I wrote to the committee that I thought we were going to need to cancel, but that we could probably wait a few days while testing ramped up. On 3/6 I proposed that we ask people not to come if they would be coming from an area with community spread, like Seattle, SF, and NYC. I made a refund form and on 3/7 we agreed to publish this. Later that day Lisa wrote to me that she didn't think it was safe to have the dance, and that she was not willing to call. I also thought about it a lot, and wrote to the committee advocating that we cancel. CDSS was not recommending groups cancel unless local schools were closed, but I thought this was too conservative. On 3/8 I confirmed the weekend of 2021-03-14 with the hall and wrote up the argument for canceling. On Monday 3/9 the committee agreed to cancel.

The hall very nicely let us forward our deposit to 2021, and we had minimal other mandatory expenses. We weren't sure how to handle staff payments, and decided to ask people to waive their refunds if they were able to. The announcement we went with was:

Due to the coronavirus, Beantown Stomp 2020 is cancelled. We know many people have travel booked for this weekend, and we've all been looking forward to it for months. But we also know that reducing person-to-person transmission is crucial for slowing the spread of this disease, and social dancing is the opposite of social distancing.

If you would like your money back we're happy to return it in full. As dances around the country are cancelling however, we're looking towards a rough Spring for people who make their living playing and calling for contra dances. If your financial circumstances allow, consider waiving your refund so we have funds to pay our performers. Please fill out this form to let us know how we should handle your payment. We'll be emailing everyone as soon as we can.

I wrote to staff to let them know the situation, and of the fifteen staff (two callers, eleven musicians, one sound, one childcare) five said they would be waiving their payments. Enough dancers decided to waive all or part of their refunds that on 3/14 we had $4,383. I wrote to the remaining ten staff about sending them $438 each, and that I hoped as the rest of the refunds came through we would be able to send them a bit more. Any unclaimed money we still have on April 20th distribute to the performers.

Here's what our final finances would likely have looked like if the weekend had gone on as planned. These are rough: many bits are budgeted amounts, and 15% of people hadn't paid yet.

There would have been substantial profit sharing: $7,421 in profit, with 1/4 to BIDA, 1/4 to JP, and the rest split among two callers, twelve musicians, one sound person, and two childcare providers in shares of $218/each. This makes me think that if things otherwise look similar next year we can probably lower the price to something like a $20-$120 sliding scale, with $70/person as the break even number.