Why I love stand up comedy

Good stand up comedy is one of my favorite things in the world, and I think that this joke really demonstrates why: 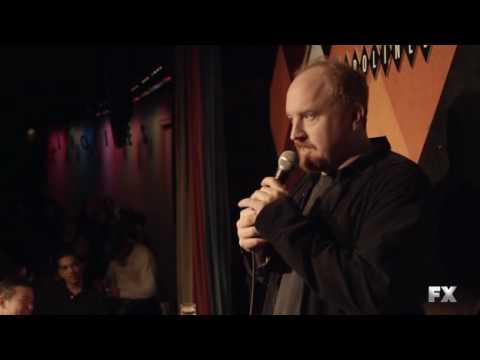 We all act like Louis and his New Yorker friends. When we see a bum on the street, we don't think twice. And if we're with someone new to town who stopped to help them, we'd probably do what Louis did and "correct" their behavior.

No, no. He needs you desperately. We just... don't do that here.

There's something very wrong with that. If you and I had a conversation about this and you explained to me why exactly it is unethical, maybe I'd follow your logic and agree. But I wouldn't feel it. Stand up comedy makes you feel it.

Of course, it's not the only art form that makes you feel it. Books, movies, music, paintings — they can all have the same effect. I guess. But for me, stand up comedy has always stood out as a tool that does a better job at this.

Well, books and movies sometimes do a great job too. But stand up comedy is concice, and there's something that I find elegant about that. Jokes have such little room for error. If you change just a word or two, the joke is often times sensitive to that.

Aside from making insightful points and allowing you to feel it, there are other things I absolutely love about stand up comedy. One is just the expert usage of words. No, of language. Verbal and nonverbal.

Maybe I have a particular appreciation of this because... one of my dark secrets is that I try to write my own stand up comedy sometimes and would feel highly incomplete if I never did a successful bit at some point in my life. Anyway, I realize how hard it is to hit the head of the nail with the wording and make the joke actually come to life. So when I see others hit it, it makes me want to fist pump. "Yes! That's it, that was a perfect way to word that!"

Another thing I love about stand up comedy is just how much balls it takes to actually do it. Getting up on stage and bombing sucks. You're up there, vulnerable. Often times you're also afraid of public speaking. You spent all this time writing your jokes, trying to use the right words, trying to get the timing right. You tell a joke. Silence. More talking. You get into a next joke. Silence.

That is so hard! But here's the thing: going through that is the only way you're going to become a good stand up comedian. It's like a terrain that you have to cross. That's a very rocky terrain though.

Compare it to, I don't know, tennis. I'm learning tennis right now (perfect covid activity). It's a little tough getting a feel for it and getting my stroke right, but it's relatively pleasant to learn. I can spend a few months on this and get to the point where I'm solid at the game. These months won't be painful. They'll actually be pleasant. But for stand up comedy, you have to cross a very rocky terrain if you want to reach the point where things actually start to flow smoothly. I think there's something admirable about being able to reach that point.

That particular Louis CK clip also was somewhat life-changing for me in terms of appreciating standup. It occurred to me there is... something almost pastor-like going on here, where people gather in-part to hear a comedian speak truths.

(that said, I think there are maybe something like 10 clips I currently know of that approach this level)

something almost pastor-like going on here, where people gather in-part to hear a comedian speak truths.

Yeah, that's a good way to put it. Although it depends on the style. Most comedians focus more on getting cheap laughs than on insight and truth. But when you get the latter, it's great.

(that said, I think there are maybe something like 10 clips I currently know of that approach this level)

For me I can't recall them all off the top of my head, but it's probably closer to a few dozen clips.

Is the picture of Louis supposed to be a video link? I just see a picture of him holding a mic.

Yes. If you click it it should take you to https://www.youtube.com/watch?v=atpndySMrVw. I'll edit the post to clarify.