What are the odds of you succumbing to "hack akrasia", never trying or not consistently applying a hack, given that you'd heard of it and thought it was worth trying?

The "real success rate".  What percentage of the time does thinking a hack is worth trying translate in to adopting it and using it consistently?

Comments: Exercise is the clear winner.  If you didn't think exercise was worth trying (5% of survey respondents), you might want to reconsider.

In a world without hack akrasia, what success rates would be be seeing?

Comments: Again, exercise is the clear winner.  If you don't exercise, next time you're in an akrasia-killing mood, it seems you'd be well advised to try and set up some sort of regular exercise regimen for yourself.  Setting up a Pomodoro regime for yourself seems like a solid 2nd choice.

Comments: This was for comparison with actual success rates.  Multiple people wrote in that they didn't have the problem LeechBlock tries to solve, so this may account for its low rate.  If you do have the problem LeechBlock tries to solve but you did't think it's worth trying, you may wish to revise your opinion, as its "real success rate" is in 2nd place at 15%.

Yes, LeechBlock may be relatively easy to subvert.  I was turned off by this initially as well.  But now I think that it's not all that important--the main thing is to disrupt your distraction-seeking behavior, not present an impenetrable barrier.  I'd guess that if you could set up LeechBlock as a reminder to engage in some non-variable-reinforcement break activity, that'd be ideal.

By the way, does anyone have an opinion on the best LeechBlock equivalent for Google Chrome? 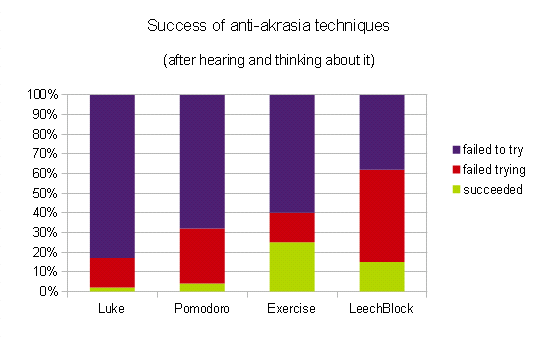 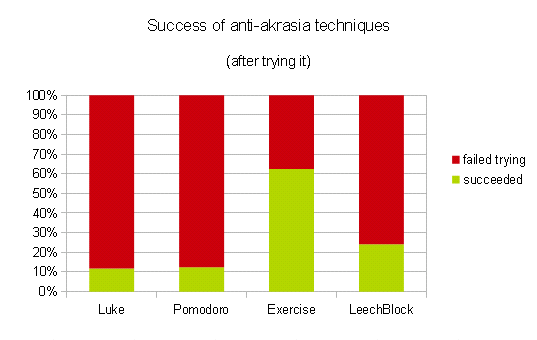 Initially I'd been thinking of "hack akrasia" as a different type of akrasia than the regular akrasia it tried to defeat.  But recently it occurred to me to question this.

There are probably a variety of akrasia subtypes, some of which have disproportionate impact on executing hacks vs doing other stuff.  Akrasia subtypes I can think of offhand:

Anyway, given the high rate of hack akrasia, it may make sense to concentrate on developing hacks that are themselves substantially less susceptible to akrasia.  For example, if I told you to watch funny videos on the internet when your morale is low (psychologists have speculated that laughter helps with ego depletion--works OK for me), it seems unlikely you'd fall prey to any akrasia subtype except forgetting akrasia.  (Optimal Breaks in general seems like it might fall in this category, especially if the breaks involve 0 setup cost.)

To fight inconsistent application of hacks that you know work when you use them, BeeMinder might be useful.

Regarding write-ins: They were under 5% for every category and I threw them out when computing conditional probabilities.