LWers often wonder how to write a good post. Many great tips and resources have been suggested already, mostly on the style and substance, not on the post structure. This is an attempt to fill some of the void using a construction toy metaphor: nested state-explain-summarize blocks.

First, there is a convenient and versatile building block of non-fiction writing, often called the inverted pyramid in the news business, though I think of it as more of a diamond when applied to technical writing in general: 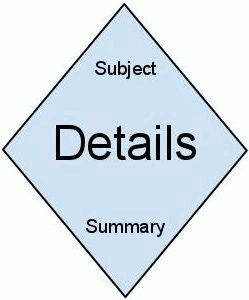 I have alluded to this previously in the context of an elevator pitch. It is how most news stories are structured, and it follows the rule of three: the main point is first stated, then explained in some detail, then summarized. This is similar to how an oral presentation ought to be structured.

If any of these three gets too large, it can, in turn, be constructed of smaller diamonds. These building blocks can be combined and/or nested to build a complete post. If you want to make several points, it is a good idea to dedicate a diamond to each, and nest them into a larger one that provides the context, states the points at the top and summarizes them at the end: 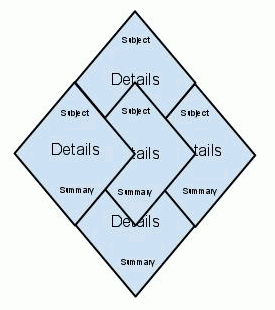 Why repeat the same point three times? I am no evolutionary psychologist or a cognitive scientist, but my feeling is that it is because people have to be primed to accept new information (hence the first two times). The third time is to make sure they retain what you've told them. In any case, what I tell you three times is true tends to work.

I am not pushing this format as the one true way of writing a post, just as a reliable way to get your point across. There are many ways of constructing short articles, this is a good place to learn one of them. If you think that a short article format is too restrictive, then maybe the LW Discussion section is not the best venue for what you are writing. Consider starting your own blog (or writing a Wikipedia article) and linking to it. That said, I am yet to see a long non-fiction LW post (likely including this one) that cannot be improved by some ruthless trimming.

The "non-fiction" qualifier is important: it is entirely possible to engage the reader using a fictional narrative. Eliezer does it quite successfully in the sequences, even in the long posts. However, this is an art, not a craft, and one would do well to master the craft first. My own attempt to post a bit of fiction here failed miserably.

Again, this [meta]post is about the post structure: nested state-explain-summarize blocks (and the post itself is deliberately structured this way). I did not try to address the issue of content, partly because there has been so much said about it already, and partly because it would make this post too long to hold your attention.

I hope to improve this post based on the feedback, provided there is enough interest.

This post has the Flesch-Kincaid readability score  of 45 (accessible to a high-school senior).

When I took an oral presentations class (company-provided, 5 full days) they told us the absolute most important information they had to give us all week was the rule of three. They didn't call it that. They described it like this:

I Tell Them what you are going to tell them

III Tell Them what you just told them.

Good post. One quibble I have is that, since the post itself is supposed to be an example of the state-explain-summarize structure, I would expect there to be a more distinct summary (I can't identify a summary - the explanation seems to be ongoing until the end of the article). Also even if there was a summary, it would be less effective by virtue of the fact that the last line is a meta-comment unrelated to the post's content (this is what sticks in people's minds) - probably better to stick that kind of thing at the top of the article. Furthermore it might be worth noting that state-explain-summarize is the standard for scientific papers.

Regarding the "rule of three", that may be part of the reason why this structure is effective. On the other hand, a more prosaic explanation is that people have an easier time understanding exposition if they know roughly where it is trying to lead them in the first place (hence the need for a statement of the subject), the explanation is there to actually provide evidence or arguments in favour of some conclusion, and the summary ensures that the reader comes away with a strong impression of the conclusion that the article was promoting, rather than being caught up in the details of some particular argument or piece of evidence.

On the other hand more informal kinds of writing can also be persuasive. I think that it depends on the relationship of the writer to his audience - how willing they are to read his writings without a guarantee of relevance or quality. Writers who have a familiar relationship with their audience (e.g. bloggers, high-status individuals on this site) can omit any introduction, and readers will be happy to invest time in reading the piece without necessarily knowing where it is leading them. On the other hand if one was to apply this policy to any random writer, a lot of time might be wasted reading irrelevant and poorly thought-out material. Furthermore such a writer knows that his readers will take the time to ponder the conclusions he is forwarding, so he doesn't need to beat readers over the head by providing a summary.

The benefits of informal structuring are many: the writer can play tricks, surprise his audience, or finish an article with a joke; the prose will be more attractive; a summary might seem demeaning to an intelligent and critical audience - and so on. But state-explain-summarize is certainly suitable in the context of writing (as an average-status member) for Less Wrong.

Huh, I guess I have to work on that skill.

On the other hand more informal kinds of writing can also be persuasive.

Indeed, but it is also much harder to write effectively. By sticking to the formula you can at least guarantee a certain minimum standard.

Furthermore it might be worth noting that state-explain-summarize is the standard for scientific papers.

You mean "is supposed to be the standard". Having read an untold number of physics publications and arxiv entries, I find that the "standard" is followed in maybe half of them. It is not unusual for the authors to introduce new evidence in the Discussion section, toward the end of their paper, when it is time to summarize. It is quite common to launch directly into the background in the Introduction, without stating their point first.

And don't even start me on the seminars... An average presentation by an expert in their field is structured much worse than the one given by EY.

If you are measuring Flesch-Kincaid on Word it often only goes up to 12.0, so if you are getting that for Word, all you know is that you are at the top of the grade-level scale.

When I was an editor for my college newspaper I would show this tool to my writers, and encourage them to aim for like 10 or 9.

I used the online test I linked to...

I guess this topic was not as interesting as I expected...

[This comment is no longer endorsed by its author]Reply