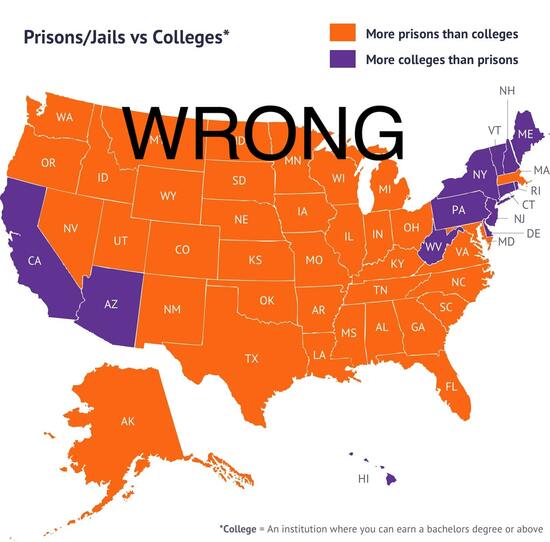 This is clearly incorrect: there's no way Massachusetts has more prisons than colleges. (MA actually has the largest ratio of colleges to prisons in the US.) After putting a link to the original source in the Facebook discussion, however, we found something pretty weird: people on mobile were seeing the incorrect map, but people on desktop were seeing a corrected one:

It turns out that Facebook was appending a tracking parameter, ?fbclid=... on desktop, but not on mobile. Normally this wouldn't do anything, because the site would ignore that in determining what page to return, but this site is apparently configured with a cache.

Many sites use caches to make it easier to serve pages. If you ask them for a page they'll give it to you (which might require a lot of work to generate) and then save a copy. Then when someone else asks for the same page, they can return the saved copy instead of putting in all that work to regenerate it. The site has a cached copy of /usa-prison-v-college in its cache with outdated content, but since ?fbclid=... is always followed by a new token those requests will never be found in the cache, and they return the current, corrected, page.

If you have a cache, what do you do when you change the page, like they did here? There are two main approaches:

In this case they apparently didn't do either: we were running into this yesterday, and as of right now the site is still returning incorrect data.

Famously, the two hardest problems in computer science are cache invalidation and picking names for things.

I'm curious what's actually doing the caching here.  Most modern servers and CDNs are fairly sophisticated about what components of the URL go into the cache keys, and know that tracking IDs should be ignored.

You're saying that Dagon was off by one problem?