Atheists who believe that God exists

The 2012 LessWrong Censur had a question about belief in God. It also had a question about how people self label their religious beliefs. Interestingly 6.69% of the nonspiratual atheists believe that it's more likely that a God exists than that no God exists. On the other side of the spectrum 17% of the committed theists believe that the chance that God exists is only 2%. Those 2% are the median for nonspirtual atheists who belief in God.

The orginal question on the survey was: 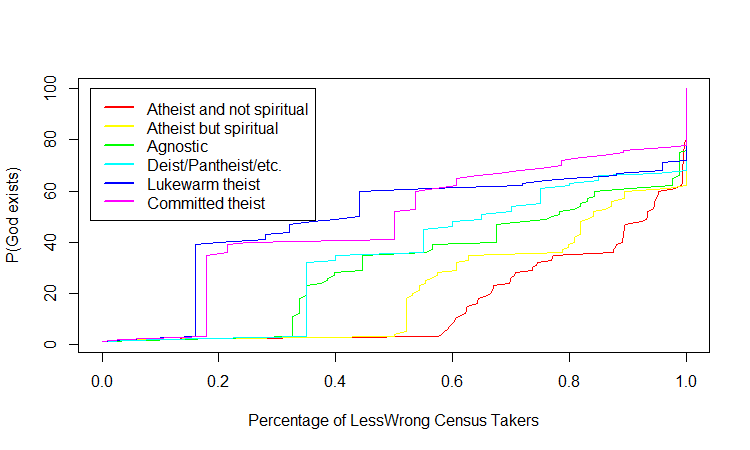 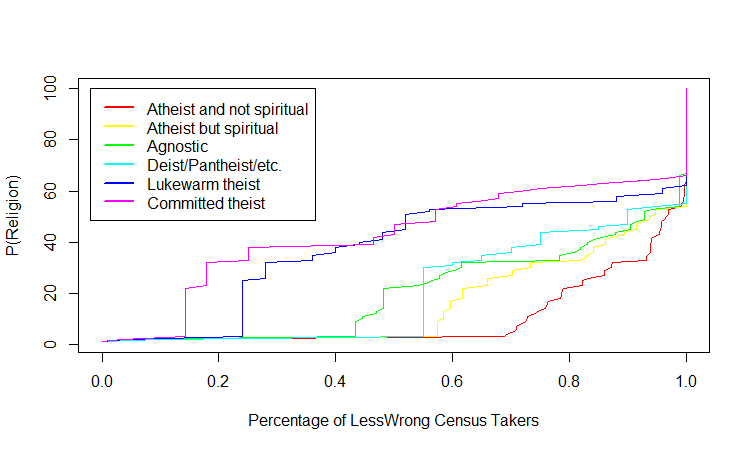 Given those results what do you think if someone tells you that they are atheist or a theist?

Not a single person who took the LessWrong census believes that the chance that God exists is less than 1%.

I think you are misinterpreting the data.

I just glanced at Yvain's spreadsheet and it looks like 681 people gave probabilities less than 1% (AKA .01 as per survey formatting) and many of those entered simply 0 which couldn't be misinterpreted either way. With about a thousand responses, <1% is the most prominent response given. No idea what data the OP could be looking at.

I personally took the survey and gave zero-as-epsilon for both questions.

a god, defined as a supernatural (see above) intelligent entity

From the previous question:

supernatural events, defined as those involving ontologically basic mental entities, have occurred since the beginning of the universe?

I'm not sure what would or would not qualify as an "ontologically basic mental entity". I'd need to look it up if you wanted me to tell you whether something does or does not deserve to be called "supernatural".

This is very important for the interpretation of the question. Could the operator of a universe simulation be considered an "ontologically basic mental entity"? I'm not sure, and i can't really remember exactly how i answered the question when i took the survey.

I'm not sure what would or would not qualify as an "ontologically basic mental entity". I'd need to look it up if you wanted me to tell you whether something does or does not deserve to be called "supernatural".

An ontologically basic mental entity is something which can think, but can't be divided into smaller parts which can't think. If, hypothetically, there were a fundamental particle which had thoughts and intentions, which could not themselves be caused by interactions of smaller parts within it, that would be an ontologically basic mental entity. More to the point of what people postulating supernatural entities actually have in mind, if there were a such thing as souls, which could think and feel, but the thinking and feeling weren't the result of some process within parts that the soul were made of, such that you could separate those parts out and not have them be involved in thinking or feeling anymore, then those souls would be supernatural.

As such, any beings simulating our own universe, as long as their intelligence were the result of a process among parts rather than a fundamental quality of some indivisible aspect of themselves, would not be supernatural.

I suspect that a large fraction of this is due simply to the small chance that people will misunderstand questions or make typos when answering them.

If that would be the case I would expect those errors to produce outliers on the graph. Especially for the atheists where there are a lot of data points I wouldn't expect them to be continously rising.