Covid-19
Personal Blog
#unclogtheFDA: a twitter storm to approve vaccines
What is a Twitter storm?
Targeting
Framing
What messages do we use?
Steps to implement the storm
Join in!
8 comments

The slow FDA approval and regulation process has slowed down vaccination and caused countless deaths. The AstraZeneca vaccine, which is already being distributed in the UK and Europe has been delayed until April despite robust safety data. J&J finished its stage III and applied on Feb. 4th, but the advisory committee meeting was scheduled for the Feb. 26th. At the current rate, that is 66,000 deaths from now. The UK's advisory agency has shown that this analysis can be done in days, not weeks (see also). For a complete account of reforms needed to save lives, see here.

For the American people, the cost benefit calculation of vaccine approval is a no brainer. Faster approval will surely save tens of thousands of lives. For the bureaucrats at the FDA receive no upside from the lives saved, but a handful of adverse affects could damage their careers. These misaligned incentives cause the delay (combined with the FDA's anti-expected-value culture). But with enough political pressure any one of the FDA, the HHS, the White House or Congress could change this system. This post is about how to build that public pressure.

We need to bring in more Americans and control the issue framing. Many a wonky public health scholar has criticized these slow, reactionary policies: Marty Makary, Michael Mina, Peter Hotez and Vivek Murphy. Likewise for policy wonks: Alex Tabarrok, Nate Silver, Matt Yglesias, Zvi Mowshowitz, Rob Wiblin. These authors made a stunning case for reform, but the conversation needs to move from wonks to the mainstream. A real public pressure campaign should be framed in terms appealing to the audience, should draw on personal stories of affected people (not EV calculations), and should create sharable viral content. When the White House sees public opinion shift they will have more leverage over the FDA for reform.

When a specific tweet and hashtag are tweeted and retweeted quickly enough, the hashtag is included on Twitter's "trending" list and displayed to all Twitter users, even those who are not a member of the hashtag user's list of followers. This often leads to the original message or hashtag crossing to other social media sites or the mainstream media, resulting in much deeper penetration into the collective conscience (Techopedia).

In a coordinated action, a group of ~100 or more people tweet and retweet a hashtag at the same time. Ideally the storm is launched in a single hour to achieve maximum trending.

The campaign starts with a specific target decision maker and ask. The team then selects an issue framing and builds sharable hashtags, images and links around it. The team then recruits activists to participate in the twitter storm using influencer and personal networking. Activists + viral content + coordinated attack time = increased awareness.

A campaign should have a defined target (a decisionmaker) and a clear ask. The targets should be individuals who can enact the ask. They should be the biggest decisionmakers who will actually see our output (do not tweet @JoeBiden).

Some good targets are Acting Commissioner Janet Woodcock (8k followers) and Biologics Evaluation Director Peter Marks (18k). Marks doesn't have a twitter but the department does (https://twitter.com/fdacber?lang=en). When tweeting at the targets, we can also frame our ask as a congratulations on their new roles.

Naturally, the FDA staff at the Center for Biologics Evaluation and Research justified its novel requirement by using an old argument—increasing safety standards. That makes it hard for anyone to contest the new requirement without appearing cavalier. But what’s cavalier is delaying a safe and effective vaccine as thousands of Americans die each day. Marty Makary, Prof. of Health Policy at John Hopkins

The team then designs an issue framing to advance their agenda. In the context of politics or mass-media communication, a frame defines the packaging of an element of rhetoric in such a way as to encourage certain interpretations and to discourage others. Members of political parties attempt to frame issues in a way that makes a solution favoring their own political leaning appear as the most appropriate course of action for the situation at hand. Frames should involve only simple math and concepts the audience already has (sorry expected value). Identify your most appealing frame and your opponents counter frame.

Our most appealing issue frames

The FDA's most appealing issue frames

The goal is to keep the conversation on our framings and off of their framings.

What messages do we use? 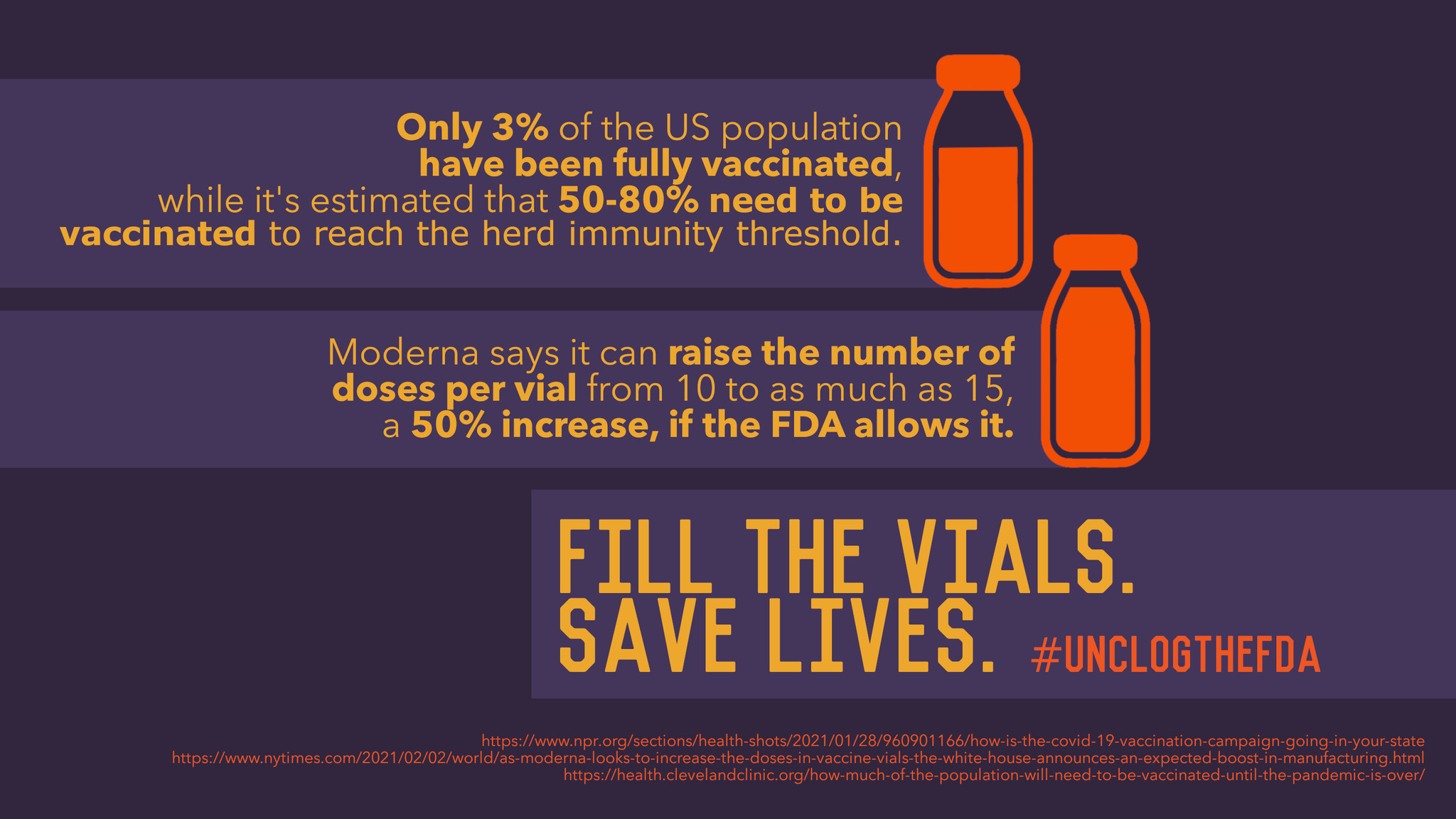 Steps to implement the storm

The slow FDA approval and regulation process has slowed down vaccination and caused countless deaths.

Minor suggestion: an numerical estimate might carry more weight than "countless" in this case. Or, better yet: a (statistically-estimated) counter. Update regularly as the number goes up, to emphasize the cost-in-lives of time passing.

Good point and interesting idea, any chance you would like to implement it?

Clearly stating the lives at stake is of course necessary and within our bandwidth budget. But we should be careful about having too many numbers, because the goal is appealing to a less academic/wonky/rat audience. Avoid any jargon-laden multi-level models or expected value discussions. Personal narratives are more powerful.

Here's some updates on this:

This is great, but we need more people. It might be worth gently reminding people that it only takes a few minutes to set up a Twitter account.

We have some big Twitter influencers who have signaled they are on our side but haven't yet used our hashtags. They should be our primary targets to get involved:

I have compiled a more complete list of Twitter accounts that are verified on our side (at least for #ApproveAstraZeneca) here:
https://twitter.com/i/lists/1356638243588956163

The key is that everyone tweet out unique content and commentary.  So, post your own, original tweets and then comment on other people's tweets. Twitter's algorithms are pretty smart. Simply copy/pasting or retweeting stuff isn't going to work. Everyone should seek to provide their own angle / frame on the issue. We can almost consider it like an evolutionary experiment to see which frames go the most viral. Here are some ideas, building off the list the OP provided:

Finally, we will have about 4 high quality graphics done by a professional graphic designer and 4 lower quality graphics prepared (photos of experts with quotes). So far we have released 2, which you may have see floating around. We're still figuring out the best way to release these graphics for maximal impact. We have a coordination discord here although it's not really being used much : https://discord.gg/xHutNv8e

Hashtags we will focus on are #UnclogTheFDA and #ApproveAstraZeneca. I like #InvisibleGraveyard also and of course we are open to other ideas. Based on what I read, the simpler the hashtag, the better. It appears one word / singular noun type things trend the most. We might all want to mention keyword "FDA" in all our tweets also so maybe "FDA" will go trending.

I think picking a weekday is better than a Sunday, because most of the influence will come from media coverage. A media cycle is easier to start during the week than on a weekend.

Not opposed, but just want to note we are planning a demonstration outside the FDA on sunday from 2-4pm. I shall post links to the Facebook and Meetup events soon. A bunch of local LWers can make it on weekends but not weekdays. I think this sequence works well - we do the protest and gets some pictures, and then share them as part of the Twitter storm on Monday.

You could cite the standards for emergency use authorization, as I do here:

Graphics have been dumped here: https://github.com/tliptrot/InternalMemos/tree/master/FDA_images?fbclid=IwAR2L_2ibD49JWkj4qrvD4aN-GbvDl7VfMOIfBwZUtCQKaDspoXmVrFb7xa4