Were the Great Tragedies of History “Mere Ripples”?

It's been a year, but I finally wrote up my critique of "longtermism" (of the Bostrom / Toby Ord variety) in some detail. I explain why this ideology could be extremely dangerous -- a claim that, it seems, some others in the community have picked up on recently (which is very encouraging). The book is on Medium here and PDF/EPUB versions can be downloaded here.

It feels somewhat tribal and irrational to me that this gets downvoted without any comments presenting critique. I think it would be beneficial to everyone if thesis of the book were addressed. My best guess for why there are downvotes but no comments is that this is n-th iteration of the interchange between author and the community and community is tired of responding over and over again to the same claims. If that's the case, then it would be beneficial to people like me of there was at list a link to a summary of discussion, so far. I think the book is written in quite clear way which should make critiquing it directly quite easy. And the subject matter is very important regardless if you agree to thesis (then you fear genocides etc.) agree with "longtermism" as defined in the book (then you fear the book can stand on the way to floorishing of posthumans) or you don't think the definition matches the actual rules you and your community live by. I bet it's the third case, but IMHO downvoting looks like a reaction typical for someone accepting the description but not liking the thesis (so more typical for second case) while comments could help explain why the critique does not apply. The are of course other possibilities beyond the three. For example: accepting that "longtermism" correctly caputres the assumptions, but the conclusions the author is coming to do not logically follow, or perhaps do follow, but the final judgment of the outcome is wrong, etc. I think it would be beneficial to me to learn what is the exact case and counterargument.

The "longtermism" is a strawman, you guessed correctly. Specific arguments in a separate comment.

Thanks for the warning that obvious strawmen are only obvious to people familiar with the community.

One of the many criticisms of utilitarianism is that it’s insensitive to the distinction between persons. [...] This leads to a startling conclusion: the death of someone you love dearly is no worse, morally speaking, than the non-birth of someone who could have existed but never will.

(Hint: one of the options includes death of someone who presumably prefers not to die.)

> Richer countries have substantially more innovation, and their workers are much more economically productive. By ordinary standards—at least by ordinary enlightened humanitarian standards—saving and improving lives in rich countries is about equally as important as saving and improving lives in poor countries, provided lives are improved by roughly comparable amounts. But it now seems more plausible to me that saving a life in a rich country is substantially more important than saving a life in a poor country, other things being equal.

[...] the claims of Mogensen and Beckstead are clearly white supremacist: African nations, for example, are poorer than Sweden, so according to the reasoning above we should transfer resources from the former to the latter.

If you even wondered why Effective Altruists steal money from African anti-malaria charities, and send them to Swedish entrepreneurs, this is the explanation you were looking for. /s

(Hint: in general, saving lives in poor countries is cheaper than in rich countries. Therefore...)

Uhm, what is your proposal, then? Abandon technology, including agriculture, let 99.99% of Earth population starve to death... and then be optimistic that we will most likely survive a few more supervolcanoes. (Pol Pot would approve.) Or continue exactly the same way we are now... and then we run out of oil, and then...

So... my impression is that half of the book is strawmanning utilitarians and Nick Bostrom specifically; and the other half is essentially dancing around the problem "doesn't consequentialism mean that horrible things done today can be excused by a hypothetical greater good in the future?"... which is a valid point, but is in no way specific for Bostrom or utilitarians, and could be analyzed separately. (Unless you can specifically point to horrible things actually done by Nick Bostrom.)

I'm not sure anyone will see this, given the OP now stands at -15 (not that I have any objection to that). But I think the accusation of straw-manning is not accurate. In this paper, which is referenced in the OP, Bostrom estimates:

Advancing technology (or its enabling factors, such as economic productivity) even by such a tiny amount that it leads to colonization of the local supercluster just one second earlier than would otherwise have happened amounts to bringing about more than 10^29 human lives (or 10^14 human lives if we use the most conservative lower bound) that would not otherwise have existed. 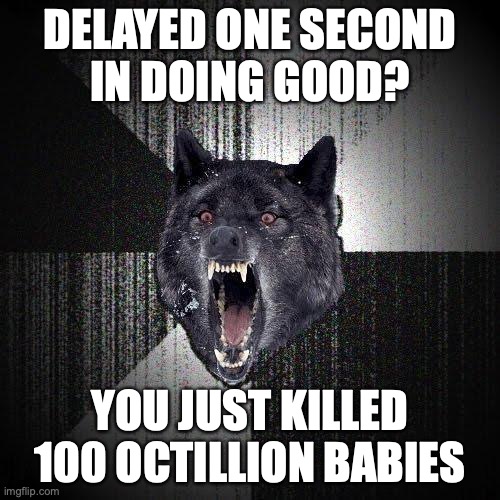 (I always hear the larger claims of EA, Utilitarianism, and Transhumanism in the voice of Insanity Wolf.)

However, the OP does not really make any arguments against Bostrom. He denies the conclusions but does not follow that back through the argument to the premises and say why he rejects either the validity of the argument or the truth of the premises.

(Hint: in general, saving lives in poor countries is cheaper than in rich countries. Therefore...)

Here's the quote saying in so many words that Swedish lives are worth more.

The quote does not imply that "we should transfer resources from [African nations] to [Sweden]", precisely because other things are not equal (in general, saving lives in Africa is cheaper than saving lives in Sweden).

And the fact that Effective Altruists (who usually subscribe to some form of utilitarianism, otherwise why would they care about effectivity of their altruism) generally move money from Sweden (and other rich countries) to Africa, rather then the other way round, should be a sufficient reality check for the author.