Here are the updates I pushed in the last week:

I'm curious about the process for detecting spam voting (and if it's robust to public knowledge).

Mostly just a bunch of heuristics of me looking at patterns in the account creation, and then following up on that. One major pattern was that a lot of spam accounts used @Mailinator.com email addresses, which made that part a lot easier. But there were also a few others.

So the week's up; can we get rid of the annoyingly huge map at the top now? :-)

(Maybe the answer is that it's genuinely useful to have it there for the sake of people going to SSC meetups in the near future, in which case fair enough.)

Will remove it early next week. The idea was indeed that it would be useful for people going to SSC meetups, but a lot of the SSC meetups have now happened, so it's less important.

Yup, understood. But right now, on my laptop this is how it looks; the actually-kinda-useful portion of the page is outlined in red. 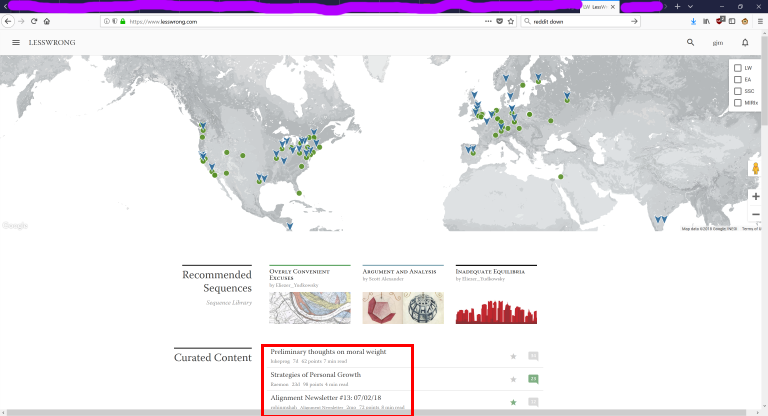 [EDITED to add: ah, no, the image-embedding syntax doesn't work when using the WYSIWYG editor. Will try to fix.]

The really useful portion of the page, the chronological list of posts, is off the bottom of that image. To a good approximation, nothing visible on the page is actually useful to me.

But, again, I understand that the extra value to meetup-goers may justify this.

I've failed to fix the embedded image; I switched to Markdown editing mode, but now editing the comment above and clicking "submit" appears not actually to change anything. Might be a cacheing problem somewhere, but e.g. viewing in an entirely different browser doesn't show my changes as having taken effect either.

Oh, huh. I think I must have introduced that bug when I refactored some in the last few days. Will fix ASAP.

Have a PR up, should be merged and deployed tomorrow. Sorry for the hassle.

Doesn't seem to be fixed yet; any revised ETA?

Ah, yeah. Sorry. We ended up discovering some bugs in the main branch we wanted to fix before deploying. I think we fixed everything yesterday, so should be deployed by the end of today.

It's certainly working now, anyway. Thanks!

Yep, fixed it two days ago, sorry for the delay!

Yeah, agree. I think it's quite costly for non-meetup-goers.

This is fantastic news!

I wonder if it would be possible to use some kind of machine learning to discover new troll accounts given the known ones, and then flag them for manual review.