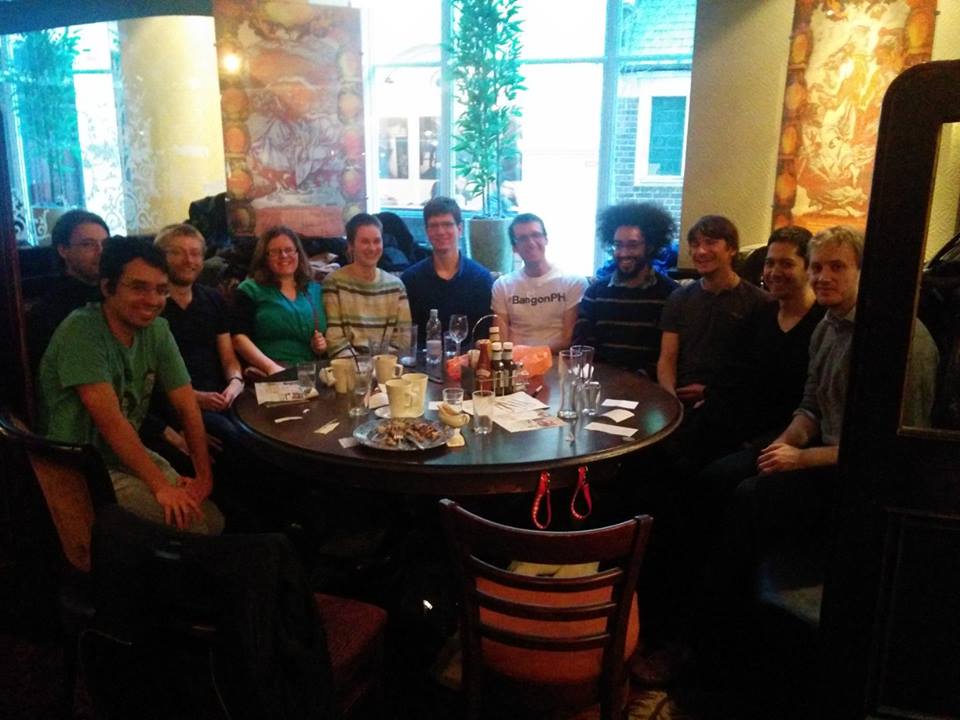 A photo from a (different) recent LW London meetup

Cross-posted from my blog.

I wasn't going to bother writing this up, but then I remembered it's important to publish negative results.

LessWrong London played a few rounds of paranoid debating at our meetup on 02/02/14. I'm not sure we got too much from the experience, except that it was fun. (I enjoyed it, at any rate.)

There were nine of us, which was unwieldy, so we split into two groups. Our first questions probably weren't very good: we wanted the height of the third-highest mountain in the world, and the length of the third-longest river. (The groups had different questions so that someone on the other group could verify that the answer was well-defined and easy to discover. I had intended to ask "tallness of the third-tallest mountain", but the wikipedia page I found sorted by height, so I went with that.)

I was on the "river" question, and we did pretty badly. None of us really knew what ballpark we were searching in. I made the mistake of saying an actual number that was in my head but I didn't know where from and I didn't trust it, that the longest river was something like 1,800 miles long. Despite my unconfidence, we became anchored there. Someone else suggested that the thing to do would be to take a quarter of the circumference of earth (which comes to 6,200 miles) as a baseline and adjust for the fact that rivers wiggle. I thought, that's crazy, you must be the mole. I think I answered 1500 miles.

In reality, the longest river is 4,100 miles, the third longest is 3900 miles, and the mole decided that 1800 was dumb and he didn't need to do anything to sabotage us. (I don't remember what the circumference-over-four person submitted. I have a recollection that he was closer than I was, but I also had a recollection that circumference-over-four was actually pretty close, which it isn't especially.)

The other team did considerably better, getting answers in the 8,000s for a true answer of 8,600.

I'd devised a scoring system, where every player submits their own answer, and non-moles score proportional to -|log(given answer / actual answer)|; the mole scores the negative mean of everyone else's score. But after calculating it for a few people, we decided we didn't really care, and we probably wouldn't be playing enough rounds for it to become meaningful.

Those questions weren't so great, because we felt there wasn't much you could do to approach them beyond having some idea of the correct answer. For round two we tried to pick questions more amenable to Fermi estimates: annual U.S. electricity consumption (sourced from Wolfram Alpha), and the number of pennies that could fit inside St. Paul's Cathedral. This round, we gave the correct answers to the moles.

I was on team Cathedral, and again did pretty badly. We started by measuring pennies using notepaper for scale, and calculating packing densities, to work out pennies per cubic metre. (I don't remember the answer, but we got pretty close.) But after that it was just a matter of knowing how large St. Paul's Cathedral was likely to be.

I had been stood outside St. Paul's Cathedral a few weeks back, but mostly facing in the wrong direction while tourists took photos of the group I was with. From that vague recollection I thought maybe it was about a thousand metres square at the base, and four stories so about twelve metres high? (Later I looked at a picture of the Cathedral, and realized that I was probably thinking of the dimensions of the entrance hall.) Someone else, who had actually been inside the cathedral, was giving much higher numbers, especially for the base, and someone else was agreeing with his general ballpark. And the other people weren't saying much, so I figured one of those two had to be the mole, and decided to not update very much in that direction. Those numbers were pretty reasonable, and mine were pretty bad. One of them was the mole (not the one I most suspected); I don't remember what he said his strategy was.

Again, I'm not too sure it was a great question; pennies-per-cubic-metre is a question of geometry rather than estimation, and the interior dimensions of St. Paul's Cathedral don't seem much more Fermi estimable than the river question.

The other team got very close to the answer I'd given the mole. Apparently they actually came up with a number off the top of someone's head that was pretty damn close. Embarassingly, the answer I gave the mole was an order of magnitude too high.... I'd sourced it from Wolfram Alpha ahead of time, but then someone asked me to clarify whether it was total energy usage, or just electricity usage. I looked again to check, and I think I used a different query, saw that it said "electricity usage", and didn't see that the number was different. The answer I actually gave was for energy usage.

The mole on that team reported that it wasn't really helpful to know the correct answer without any intermediate steps. That mechanic might be worth experimenting further, but currently I think it doesn't add much, and it's a mild extra hassle when setting up.

I had fun, and hopefully in future I will put much less trust in my estimates of the dimensions of things, but I wouldn't say the session was a particular success. Not a failure either, just kind of "it happened".