When does technical work to reduce AGI conflict make a difference?

When does technical work to reduce AGI conflict make a difference?: Introduction

This is a pared-down version of a longer draft report. We went with a more concise version to get it out faster, so it ended up being more of an overview of definitions and concepts, and is thin on concrete examples and details. Hopefully subsequent work will help fill those gaps.

Some researchers are focused on reducing the risks of conflict between AGIs. In this sequence, we’ll present several necessary conditions for technical work on AGI conflict reduction to be effective, and survey circumstances under which these conditions hold. We’ll also share some thoughts on promising directions for research and intervention to prevent AGI conflict.

Could powerful AI systems engage in catastrophic conflict? And if so, what are the best ways to reduce this risk? Several recent research agendas related to safe and beneficial AI have been motivated, in part, by reducing the risks of large-scale conflict involving artificial general intelligence (AGI). These include the Center on Long-Term Risk’s research agenda, Open Problems in Cooperative AI, and AI Research Considerations for Human Existential Safety (and this associated assessment of various AI research areas). As proposals for longtermist priorities, these research agendas are premised on a view that AGI conflict could destroy large amounts of value, and that a good way to reduce the risk of AGI conflict is to do work on conflict in particular. In this sequence, our goal is to assess conditions under which work specific to conflict reduction could make a difference, beyond non-conflict-focused work on AI alignment and capabilities.[2]

Examples of conflict include existentially catastrophic wars between AGI systems in a multipolar takeoff (e.g., "flash war") or even between different civilizations. We’ll assume that expected losses from catastrophic conflicts such as these are sufficiently high for this to be worth thinking about at all, and we won’t argue for that claim here. (Though we do note that the case for work on AGI conflict seems stronger for those who prioritize s-risk reduction.)

We’ll restrict attention to technical (as opposed to, e.g., governance) interventions aimed at reducing the risks of catastrophic conflict involving AGI. These include Cooperative AI interventions, where Cooperative AI is concerned with improving the cooperative capabilities of self-interested actors (whether AI agents or AI-assisted humans).[3] Candidates for cooperative capabilities include the ability to implement mutual auditing schemes in order to reduce uncertainties that contribute to conflict, and the ability to avoid conflict due to incompatible commitments (see Yudkowsky (2013); Oesterheld and Conitzer (2021); Stastny et al. (2021)). The interventions under consideration also include improving AI systems’ ability to understand humans’ cooperation-relevant preferences. Third, there is shaping agents’ cooperation-relevant preferences, e.g., preventing AGIs from acquiring conflict-prone preferences like spite. An overview of the kinds of interventions that we have in mind here is given in Table 1.

Table 1: Categories of technical interventions specific to reducing conflict that we consider in this sequence.

There are reasons to doubt the claim that (Technical Work Specific to) Conflict Reduction Makes a Difference.[4] Conflict reduction won’t make a difference if the following conditions don’t hold: (a) AGIs won’t always avoid conflict, despite it being materially costly and (b) intent alignment is either insufficient or unnecessary for conflict reduction work to make a difference. In the rest of the sequence, we’ll look at what needs to happen for these conditions to hold.

Throughout the sequence, we will use “conflict” to refer to “conflict that is costly by our lights”, unless otherwise specified. Of course, conflict that is costly by our lights (e.g., wars that destroy resources that would otherwise be used to make things we value) are also likely to be costly by the AGIs’ lights, though this is not a logical necessity. For AGIs to fail to avoid conflict by default, one of these must be true:

Conflict isn’t costly by the AGIs’ lights. That is, there don’t exist outcomes that all of the disputant AGIs would prefer to conflict.

If either Conflict isn't Costly or Capabilities aren't Sufficient, then it may be possible to reduce the chances that AGIs engage in conflict. This could be done by improving their cooperation-relevant capabilities or by making their preferences less prone to conflict. But this is not enough for Conflict Reduction Makes a Difference to be true.

Intent alignment may be both sufficient and necessary to reduce the risks of AGI conflict that isn’t endorsed by human overseers, insofar as it is possible to do so. If that were true, technical work specific to conflict reduction would be redundant. This leads us to the next two conditions that we’ll consider.

Intent alignment — i.e., AI systems trying to do what their overseers want — combined with the capabilities that AI systems are very likely to have conditional on intent alignment, isn’t sufficient for avoiding conflict that is not endorsed (on reflection) by the AIs’ overseers.

By unendorsed conflict, we mean conflict caused by AGIs that results from a sequence of decisions that none of the AIs’ human principals would endorse after an appropriate process of reflection.[6] The reason we focus on unendorsed conflict is that we ultimately want to compare (i) conflict-specific interventions on how AI systems are designed and (ii) work on intent alignment.

Neither of these is aimed at solving problems that are purely about human motivations, like human overseers instructing their AI systems to engage in clearly unjustified conflict. 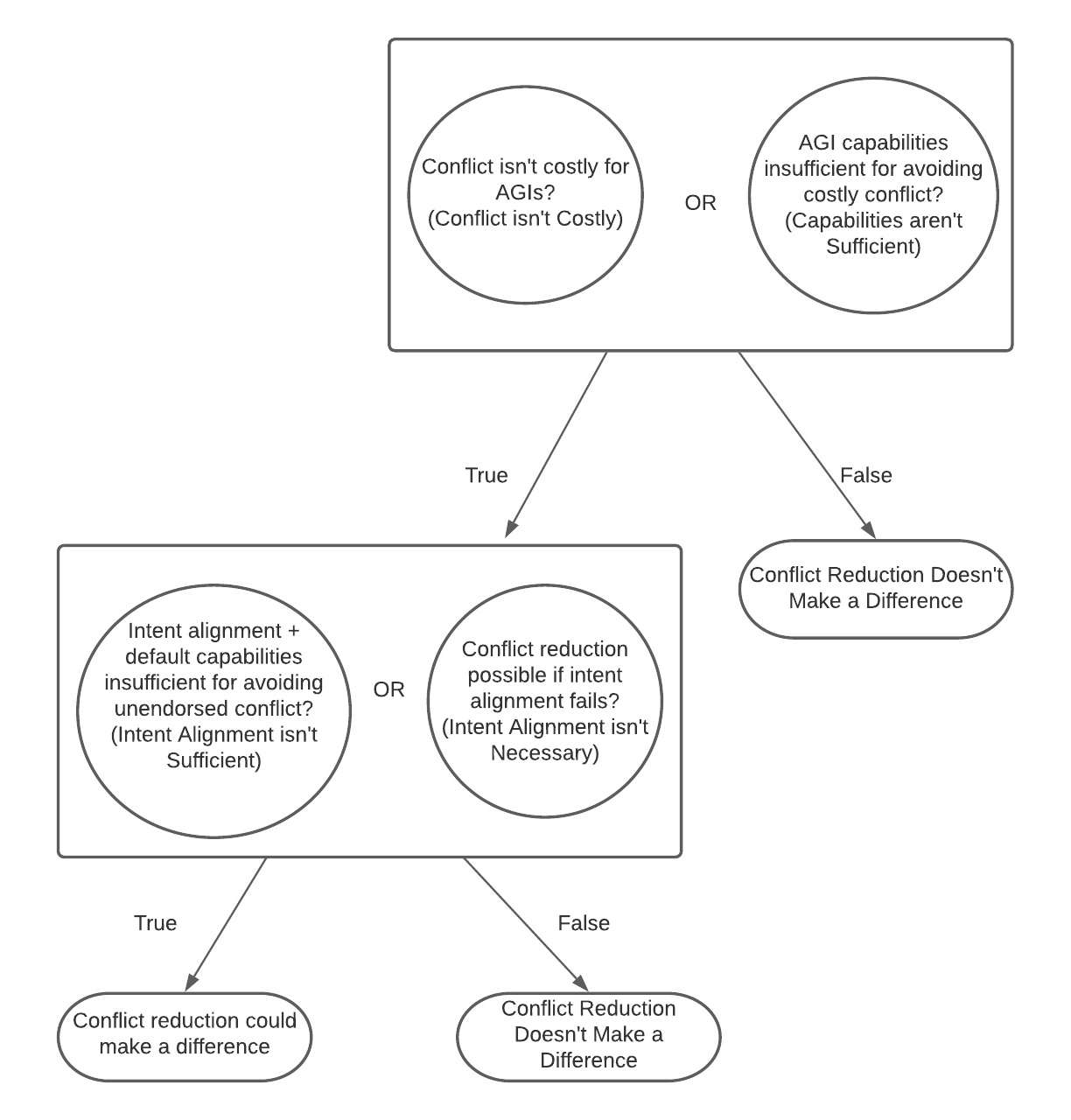 Figure 1: The relationship between the claim that work on technical interventions to reduce AI conflict makes a difference to the chances of unendorsed AI conflict (“conflict reduction makes a difference”), and two necessary conditions for that to hold — roughly, that conflict isn’t costly for some AGIs or that AGIs will be able to avoid costly conflict, and that intent alignment is either insufficient or unnecessary for reducing the risks of unendorsed conflict.

Thanks for sharing this! Could you make it an actual sequence? I think that would make navigation easier.

Minor readability suggestion to reduce the number of negations. Change: