The secret of Wikipedia's success
D0TheMath2mo5

This is an interesting perspective on why Wikipedia can be as reliable as it is, but I don't think it being untrusted by The Powers That Be is why we don't see more disinformation attacks or propaganda using it as a medium, since sources like Reddit, Twitter, and Facebook posts are commonly used for such attacks, and it wouldn't surprise me if blogs were too. We also see few such attacks on some sources which The Powers That Be do trust, notably journal articles (though such attacks don't never happen).

Another theory may be that Wikipedia is labeled unreliable because it is not controlled by The Powers That Be, similar to how there was a reputation attack on Substack not that long ago, not because there are morally corrupt people blogging on the platform, but because it explicitly rejects the control of The Powers That Be. The contra-positive of if you can't beat them, join them.

Have you considered the possibility that people do not list first-order effects to individuals because huge swaths of the political establishment do not actually care about people they don't know?

I think this fails to explain why even when the people talking are directly affected (such as with the UBI example, which would affect everyone) we don’t see as much focus on the direct effects of the policy.

This leads me to believe it could somewhat be the opposite of what you suggested. If I say that UBI would give people money, and so it’s good, people may suspect me of only advocating for a UBI because I selfishly wanted money, rather than for more pro-social reasons. However if I say UBI is good because it allows for young couples to start families, increasing the birth rate & population, then because I am not in a young couple there is no chance I could be arguing for such a policy for purely selfish reasons, so must be arguing for it because I genuinely believe it will help others.

So people may argue using nth order effects because those effects will explicitly disclude the affects of the policy on the arguer.

I've noticed a similar neglect of obvious first order effects too. Intuitively the signalling and counter-signalling explanations seem the most likely to be correct to me.

This reminds me of the following popular meme template: 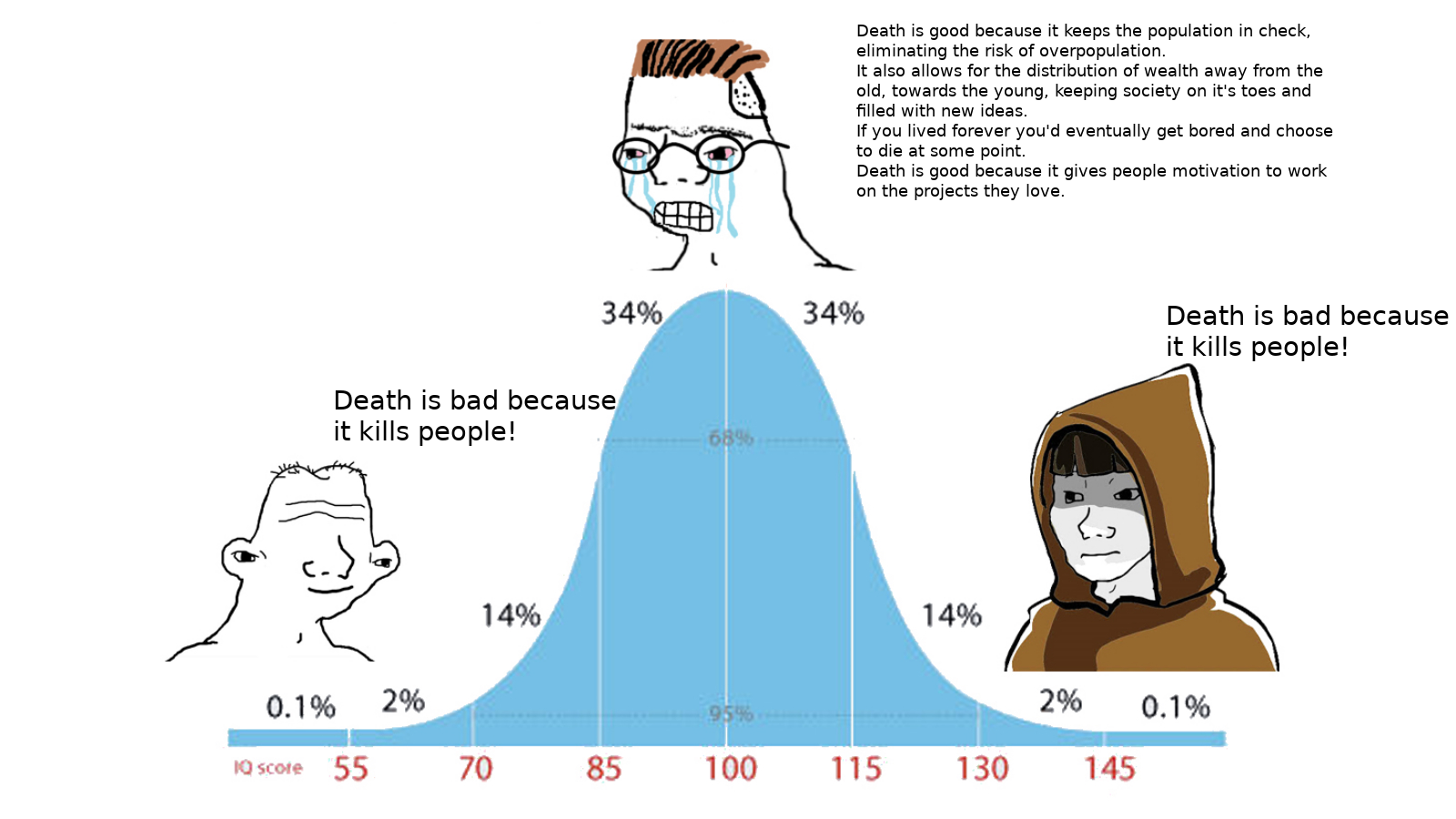 In this template you have very smart people and very dumb people coming to the same conclusion by using similar simple arguments, while the moderately intelligent come up with complex, clever, but ultimately wrong arguments for why the obvious policy choice is incorrect. Here, I've made a version with the very dumb & very smart arguing that death is bad using the obvious argument that "it kills people", while the moderately intelligent person argues that death is good because of various commonly argued second-order pro-death arguments.

I think it'd probably be better to include closed forecasts as well (maybe decreasing the star rating to indicate it may not be up to date on information), just because a lot of the time Metaculus will close a question long before it actually resolves. For instance, here https://www.metaculus.com/questions/6320/usas-gdpc-growth-in-2020-2029/ the question is closed, but will resolve at the end of 2029.

This is a very cool platform and I look forward to using it to supplement my own forecasts and decision making.

Do the active questions shown from Metaculus include just open questions, or open & closed (but not resolved) questions as well?

A minor improvement to the app would be the ability to move around using the mouse. But that's only because my particular setup requires me to reach over my desk to access my video-conferencing computer's keyboard, so I'm not sure how much you'd want to prioritize that.

It says something about the quality of Gather Town that that's the only improvement I can think of.

The first two levels I am very familiar with in my own reading, but I’ve never consciously done the last compression level. However when I go through my own Anki cards I will often give the answer in a much more compressed way than how I originally wrote it down, so it’s likely happening at some level during my memorization or reading process.

Yeah, so you wouldn't say something like "I want to run", or "I should get some exercise". You would say "If I go for a run, then I will likely feel refreshed and would increase the probability that my overall health increases over the long-run. Possibly causing me to live longer, and certainly increasing my future life-satisfaction. At the cost of moderate exhaustion in the near-term." then you compare the result which that action would cause to the results which alternative actions cause, choose the most favorable world-state, and perform the action which causes that world state to occur.