Calories per dollar vs calories per glycemic load: some notes on my diet

Personal Blog
Recently I decided to try to better measure and improve my diet a little bit. These were some of the parameters that I was and am interested in:
1) Ease of preparation. My time is scarce, and more importantly my willpower is scarce, and I often will just not make foods if they take too long to prepare, and then sometimes the ingredients will just end up going bad. I know, #privilege, but I'm trying to be honest with myself and realistic here.
2) High calorie to glycemic load ratio [1]. I need to consume calories -- obviously -- but while I'm doing so I want to minimize the number of times that I experience high glucose levels in my bloodstream, which appears to be toxic both in terms of increasing risk of diabetes [2] as well as decreasing cognition [3].
3) Minimizing animal suffering. I'd prefer foods whose preparation didn't entail the suffering of animals, or at least foods that came from places that tried to decrease it, like cage-free chickens.
4) Taste. I try to minimize the importance of this and think that I do a decent job, but empirically it has prevented me from more commonly eating certain foods, such as sardines, at least for now. Very open to suggestions here.
5) High calorie to dollar ratio. Because money is the unit of caring.
6) Available on FreshDirect. Because I'm lazy.
Food is heavily moralized and politicized, and I'm expecting to be judged for this post by readers who are veg*an, by readers who are into organic food, by readers who are anti those groups because I am perceived as pandering to them, as well as a variety of other groups that I can't fully anticipate and might not even know about [4]. That said, I'm posting it because a) I think it might be useful to others and b) I'm interested in feedback.
In terms of influences, I've been most influenced by the book The Perfect Health Diet, which has truly a terrible name, but which includes lots of discussion of trade-offs of different dietary approaches and seemed to (the relatively uninformed) me to be pretty reasonable. It advocates a medium-carb, high-fat, medium-protein diet.
Below is my main result. You can find more details at this google spreadsheet and plotting code at github [5; 6]. 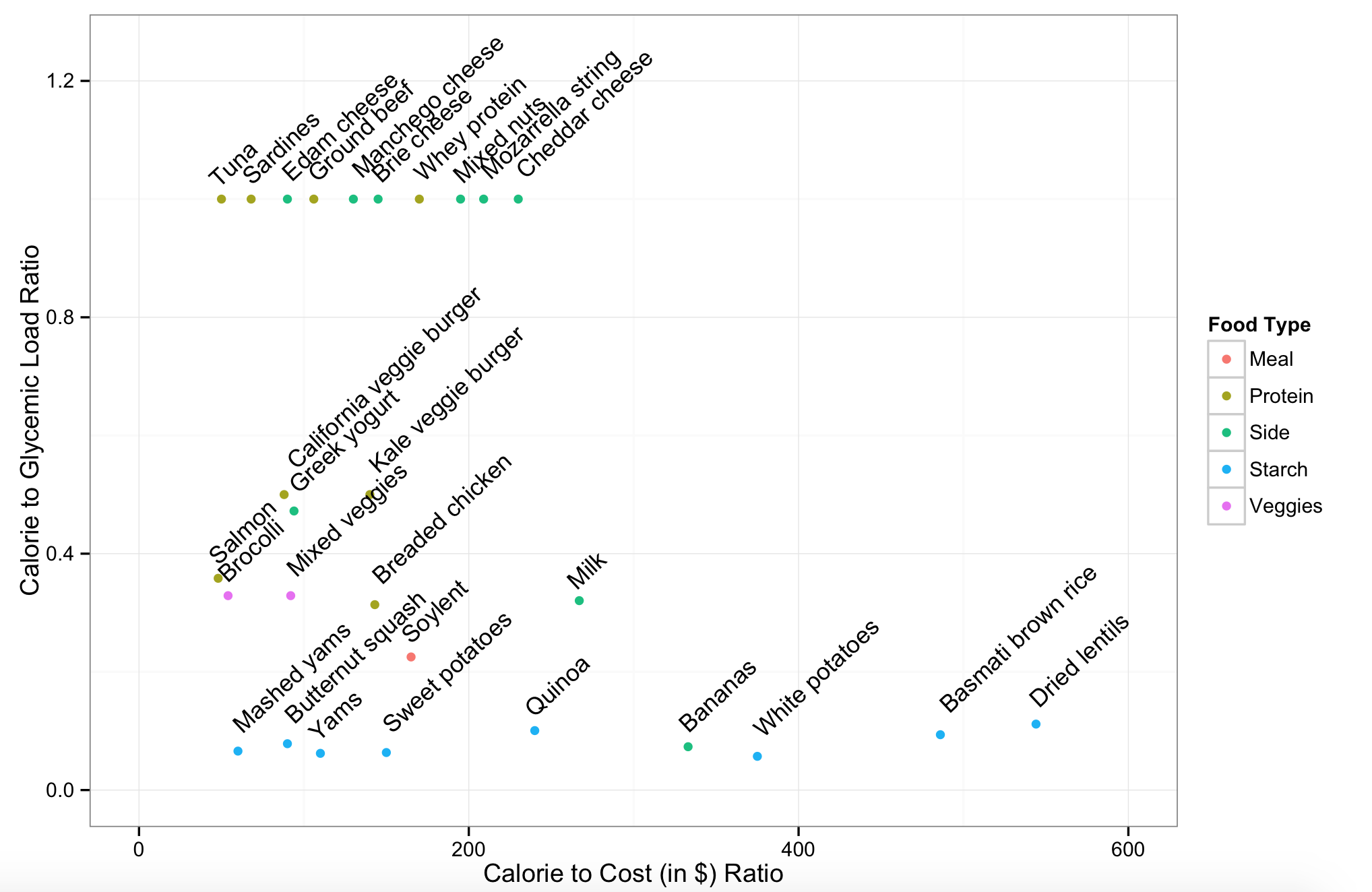 A few notes:
1) The top cluster is obviously artificial -- their glycemic load of each of those is basically negligible, so instead of infinity, I set those ratios to 1. Still, it's interesting to note that none of those are blockbusters in terms of calories per dollar in the same way that lentils, rice, or potatoes are. If you know any such foods, please let me know.
2) I was surprised that sweet potatoes did not fare better in terms of calorie to glycemic load ratio. I suppose they may be more nutritious in other ways than the other starches included, though.
3) Nuts and cheese came away from this analysis as having a lot of desirable properties, so I'm trying to eat more of both of those food groups.
I'd appreciate any feedback you might have.

Footnotes
[1]: Glycemic load per calorie makes more sense to me since it normalizes to the number of carbs you actually get from a given amount of food, rather than glycemic index which uses the same number of grams of carbohydrate from each food tested.
[2]: http://care.diabetesjournals.org/content/34/Supplement_2/S120.abstract. Note that there is some conflicting evidence here so caution is warranted.
[3]: http://www.neurology.org/content/81/20/1746.abstract.
[4]: If you insist on reading this footnote, I'll note here that I have tried to go both vegetarian and vegan before, but each time I found it both difficult logistically and literally tiring -- I think there was some sort of nutrient that I was missing that made me worse-off. And this was after some research to make sure that I'd get other nutrients that I needed, including B12. I concluded that it wasn't that easy, and instead made a small donation to the animal welfare charity Certified Humane to offset some of my guilt. If I had more money, I'd donate some more.
[5]: Note that I manually shifted some of the data points to make the text labels more legible, which you can see in the code.
[6]: As an addendum, here are some foods you won't find on there, and why:
a) Salad. There is actually a way to get pretty cheap salads around where I live, but historically speaking, salads leave me substantially more hungry two hours later and basically have a tendency to ruin my day, so I avoid them.
b) Insects. I recently became intensely interested in eating insects for 30-60 minutes, but on cursory internet research, couldn't find anything that came close to justifying a calorie to dollar ratio worth considering. Please enlighten me in the comments if you can.
c) Bread. Subjectively, I seem to be especially sensitive to its glycemic effects -- after eating it, I often feel my heartbeat increase and can feel my blood vessels pumping "harder," which I expect are signs of post-prandial hyperglycemia and is unpleasant, though of course I could be wrong. I still eat bread, but I'm trying not to eat as much.
d) Mealsquares. Unfortunately, as far as I can tell these contain eggs and I seem to have developed a food-only (!) egg allergy, plus eggs are like the poster child of the "these are surprisingly unethical, at least when conventionally farmed" camp, so I'm not that motivated to solve my apparent allergy. This allergy/opinion is pretty rare and I don't think they should change just for me, but it means that I didn't do much research into them.
Personal Blog

Crickets at $38/pound dry weight are close to being competitive with salmon (more than 3 pounds needed to get the equivalent nutrition). Or $23/pound in Thailand (before high shipping fees), suggesting the cost in the U.S. will drop a bit as increased popularity causes more competition and economies of scale.

Could you breed crickets at home?

I am confused - if you have willpower issues, why do you want high-calorie food. Stuffing yourself on them until you feel full or at any rate until the pleasure of eating is maximally satisfied will lead to over-maintenance calories.

Maybe you should be looking to high-satiety, not high-calorie?

I have found the following about myself:

2) interestingly, the kind of thick pea soup with some meat + bread logic of homeless soup-kitchens is actually working. Apparently, when grease is diluted with hot water in a soup, and some bread is added, it works for satiety.

1+2) it seems my body wants at least a bit of carb high and a coating of grease on the inside of the stomach, even if diluted

Does anyone have an idea what is brown pasta? Wholemeal? Rye? Pasta colored brown with food coloring (don't laugh, they do shit like this to trick the gullible).

My subjective experience is that starting a meal with a small amount of insulin spiking carbohydrate and then moving on to protein and fat results in feeling full faster than starting with the protein/fat and moving on to the carbs. I generally have a rule about portioning my food out at the beginning of the meal and not going back for more until 20 minutes after I finish the first portions. Usually this prevents me from overeating, although eating imbalanced meals almost always leaves me hungry long enough to get second helpings.

Dessert-first? So that is why we don't let kids eat dessert first because they won't eat the vegs afterwards? Kind of checks out...

Thanks for the insulin index recommendation. I'm not worried about satiety issues for now, though I almost certainly will be one day if I live long enough. That said, that list is also a really money approach, +1.

I mostly avoid this kind of analysis as food and digestion is an extremely complicated subject.

Glycemic load, for instance, is known to behave in a quite non-linear way. If you mix two foods, the total glycemic load might be very different from sum of the individual parts. It also depends on a lot of other factors, like person-specific factors and situation-specific factors.

More about problems with glycemic load

[This] suggests that in parallel with the bacterial effects of sugars on dental and periodontal health, acellular flours, sugars, and processed foods produce an inflammatory microbiota via the upper gastrointestinal tract, with fat able to effect a “double hit” by increasing systemic absorption of lipopolysaccharide. This model is consistent with a broad spectrum of reported dietary phenomena.

This is interesting. But how do you plan to solve the calorie/day and the cooking?

Right now just eat a few meals a day (skipping breakfast usually) until I'm no longer hungry. For cooking, I mostly use a rice cooker, which is really easy and way more versatile than you'd expect.

I don't intend to cause any offense - but this post seems a little bit localised, if not personalised. You could attempt generalizing this post a bit, which would make it a lot more useful.

I would also advice using the search function, for example, I remember this thread from two months ago http://lesswrong.com/lw/lk7/optimal_eating_or_rather_a_step_in_the_right/ which might prove useful. There might be more, so you could be saving time (that you've just said is scarce) instead of re-inventing the wheel.

Thanks for the advice and no offense taken. Since I'm far from an expert in this area it didn't make sense for me to try to generalize to advice, but I thought the data set could be useful.

Interesting, but since FreshDirect only delivers to New York (according to a Google search - being British I hadn't heard of them before), and it's only a slight majority of LWers that even live in the United States (54.7%), I'm not sure how well the data generalises. It's in-depth and community-norm-conforming that I don't really mind the post being here, but how much use is this to people in different regions or countries, or even just other New Yorkers who prefer to physically go shopping for their food?

Thanks for the positive feedback. In re your critique, do you want to bet that the prices will be on average more than 30% percent different at your nearest grocery store?

I wouldn't take that bet, I was thinking of smaller differences with changes in the ordering of cost-per-calorie as the main concern, and on reflection those differences shouldn't matter much to the usefulness.

Also, millet has a slightly higher glycemic load (12/100g) compared to quinoa (10/100g), but has almost the same calories (~120) and is usually significantly cheaper (in my area, it's about a third the cost when purchased in bulk). It's probably comparable to the basmati brown (which I don't like the taste of).