The Role of Attractiveness in Mate Selection: Individual Variation

This post reports on a portion of my analysis of Fisman and Iyengar's speed dating dataset which bears on the question of how people select romantic partners.

Note: I made very substantial edits to the second to last section of this post having posted it, addressing questions of generalizability. I've also cross-posted to my blog.

The speed dating context may be unusual in that people make a decision on whether or not to see somebody again after only 4 minutes of interaction. On the other hand, some people do meet their partners in contexts such as bars and speed dating events where decisions are made based on brief interactions. To this extent, the empirical phenomena in data from the study are relevant to understanding mate selection in general.

The Predictive Power of Attractiveness

In How Subjective Is Attractiveness? I described how the group consensus on somebody's attractiveness explained 60% of the variance in people's perceptions of attractiveness. My original purpose in writing it was as background for a discussion of how much attractiveness influenced people's decisions as to whether or not to see their partners again.

I touched on this in Predictors of Selectivity and Desirability at Speed Dating Events. The group consensus on attractiveness is highly predictive of how often people wanted to see somebody again. I remember being slightly shocked upon first viewing the graphs below: 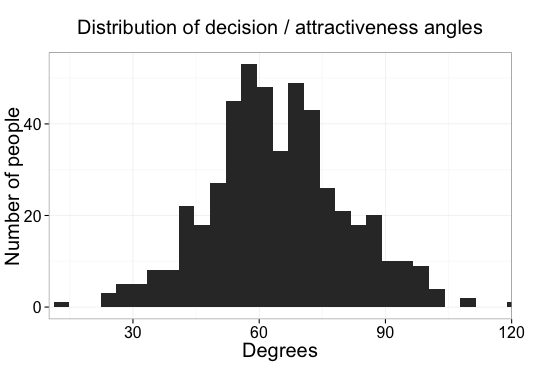 The actual preferences of the participants surely vary less than the above graph suggests if it's taken at face value: the difference between those at the extremes and those in the middle would shrink with

Still, the graph renders it plausible that the weight that people gave to attractiveness varied a lot, even if the variation was smaller than it is in the graph.

We could proceed to make "best guess" estimates of what the true distribution is, but we can get greater insight into what's going on by first adopting a shift in perspective.

Overall desirability and the tradeoffs

Participants rated each other on attractiveness, fun, ambition, intelligence and sincerity, as well as overall likeability. Ratings on the different dimensions were all correlated, sometimes strongly. (More here). This is partially explained by perceptions of somebody on one dimension influencing perceptions of the person on other dimensions (the Halo Effect). It could be partially explained by actual correlations between the underlying traits being measured. I'll explore possible explanations in greater detail in the future. From the point of view of understanding how people's preferences vary, the main point is that though we have 6 rating types, we have fewer than 6 independent of pieces of information: ratings of intelligence aren't just ratings of intelligence, ratings of ambition aren't just ratings of ambition, etc.

If we apply PCA to the 6 ratings, the first combination that the procedure gives is a weighted average where each rating gets almost equal weight:

This can be thought of as corresponding to overall favorable impressions of somebody, so I named it "good." It captures roughly 60% of the information that was in the original ratings.

The second weighted average that PCA gives is not nearly as symmetric:

As background context, if we're content not to take into account differences in romantic preferences, we can model the probability of a participant's decision being yes by using a linear model for the log odds ratio:

The fact that we're adding the tradeoff term rather than subtracting it corresponds to people tending to favor attractive and fun partners over intelligent and sincere partners, when forced to choose.

To individualize the model while attempting to correct for the variation that one would expect by chance, I followed Andrew Gelman's suggestion and used Bayesian hierarchical modeling. We replace the equation above with

where "personal tradeoff coefficient" is a constant that depends on the individual making the decision.

The plot below shows the distribution of best guess estimates for the personal tradeoff coefficients. The title of the plot is a loose description of the "tradeoff" principal component, the precise definition of which I gave above. 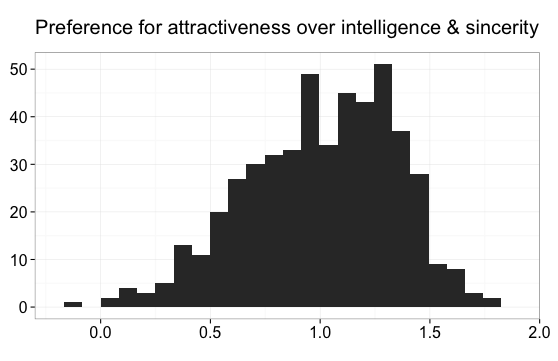 In my first draft of this post, I postponed discussion of statistical significance until later, but I subsequently realized that I could address it succinctly.

I formed the graphs below by:

The first graph shows the frequency with which people's decision was 'yes' as as a function of their partners' attractiveness level. 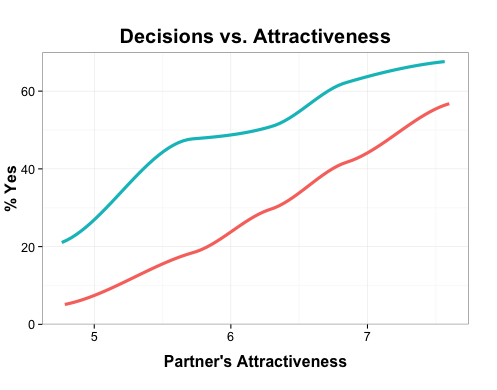 The slope is slightly larger for the the group with high coefficient: you can see that the initial difference between the two groups in selectivity shrinks as one passes from partners with low attractiveness to high attractiveness.

The visual appearance of the graph understates the difference between the two groups: the high group virtually never expressed interest people lowest part of the attractiveness spectrum, whereas people in the low group were several more times more likely to. This comes across more clearly if we replace the percentage on the y-axis with the corresponding Log Odds Ratio . Here "odds" has the same meaning that it does in gambling (e.g.Roulette) and "log" refers to "logarithm." In the graph below, the 0 on the y axis corresponds to decisions being yes 50% of the time, and an increase of 1 along the y-axis corresponds to the odds of a yes decision increasing by 2x: 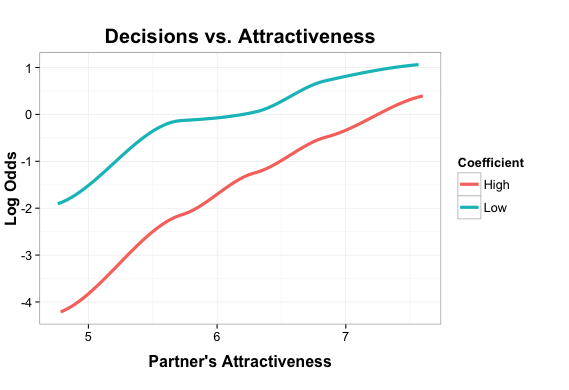 The corresponding graphs with attractiveness replaced by intelligence and sincerity are 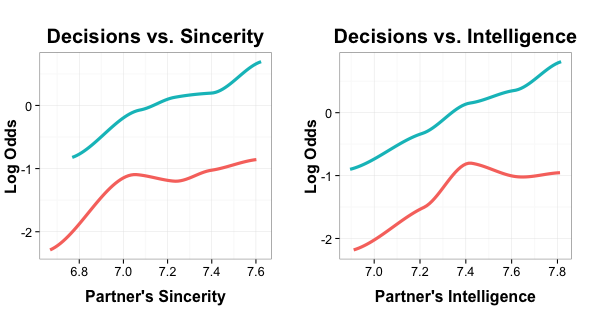 One sees that past a certain point, the high group is not responsive to increasing sincerity and intelligence, whereas the low group is.

Of course, the high group and the low group don't differ most with respect to their responsiveness to attractiveness, or intelligence, or sincerity as individual traits. They differ the most in how they respond to a tradeoff between attractiveness/fun and intelligence/sincerity. The graph that depicts this is: 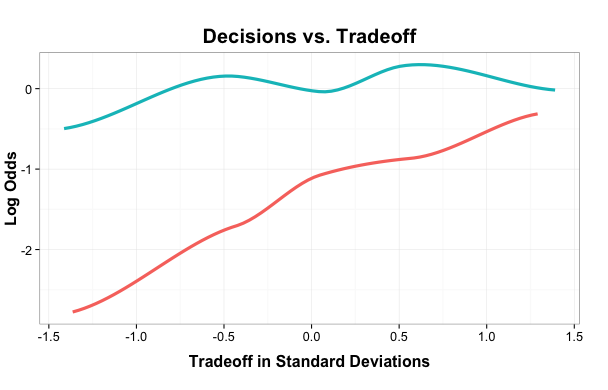 The differences between the groups correspond to generalizable phenomena. In fact, I knew that the differences are statistically robust and generalizable before even doing a train/test split as I did above. What made it obvious to me is that the tradeoff coefficient correlates with many other features of the participants that were collected prior to the events...

I'll offer partial answers to this questions in my next post. Readers who are intrigued can take a look at the survey instrument for a list of features present in the dataset, and guess which features correlated with the personal tradeoff coefficient.