Value LearningCorrigibilityAI
Personal Blog
Cake, or death!
Naive cake or death
Sophisticated cake or death: I know what you're going to say
13 comments

Here we'll look at the famous cake or death problem teasered in the Value loading/learning post.

Imagine you have an agent that is uncertain about its values and designed to "learn" proper values. A formula for this process is that the agent must pick an action a equal to:

Let's decompose this a little, shall we? A is the set of actions, so argmax of a in A simply means that we are looking for an action a that maximises the rest of the expression. W is the set of all possible worlds, and e is the evidence that the agent has seen before. Hence p(w|e,a) is the probability of existing in a particular world, given that the agent has seen evidence e and will do action a. This is summed over each possible world in W.

And what value do we sum over in each world? Σu∈U u(w)p(C(u)|w). Here U is the set of (normalised) utility functions the agent is considering. In value loading, we don't program the agent with the correct utility function from the beginning; instead we imbue it with some sort of learning algorithm (generally with feedback) so that it can deduce for itself the correct utility function. The expression p(C(u)|w) expresses the probability that the utility u is correct in the world w. For instance, it might cover statements "it's 99% certain that 'murder is bad' is the correct morality, given that I live in a world where every programmer I ask tells me that murder is bad".

The C term is the correctness of the utility function, given whatever system of value learning we're using (note that some moral realists would insist that we don't need a C, that p(u|w) makes sense directly, that we can deduce ought from is). All the subtlety of the value learning is encoded in the various p(C(u)|w): this determines how the agent learns moral values.

So the whole formula can be described as: 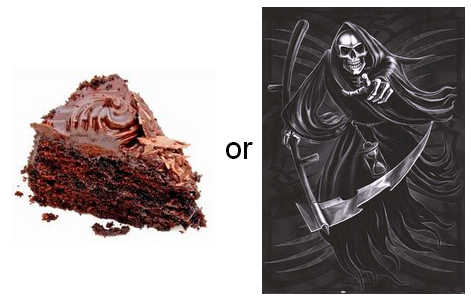 We assume the programmer's answer completely clears up the issue. And thus after asking, the agent will do whatever the programmer recommended (and it knows this now). Since it doesn't know what the programmer will say, it has p(C(u1)|e,"ask") = p(C(u2)|e,"ask") = 0.5. This gives an expected utility calculation:

Hence the agent gains from not asking.

What's going wrong here? The problem is that the agent is using its current utility function to estimate the value of its future action. At the moment, it values death or cake both at 0.5. If it asks, it runs the risk that the programmer will say "cake" and it will be forced to build cake. After hearing the answer, it will value that cake at 1, but currently it values it only at 0.5. Similarly, if the programmer says death, it will produce three deaths - which it will value at 3, but currently values at 1.5. Since each of these options are equally likely, it gets only (0.5+1.5)/2 = 1 utilitons from asking.

In summary: the naive cake-or-death problem emerges for a value learning agent when it expects its utility to change, but uses its current utility to rank its future actions.

Sophisticated cake or death: I know what you're going to say

Using p(C(u)|w) rather than p(C(u)|e,a) does away with the naive cake or death problem.

The agent remains vulnerable to a more sophisticated cake-or-death problem, though. Suppose it is still uncertain between cake or death in its utility function, but it has figured out that if asked, the programmer will answer "cake". Thereafter, it will make cake. In this situation, it will only derive +1 from asking, whereas it still derives +1.5 from not asking (and doing three deaths). So it won't ask - as long as it does this, it remains in w3.

What happened here? Well, this is a badly designed p(C(u)|w). It seems that it's credence in various utility function changes when it gets answers from programmers, but not from knowing what those answers are. And so therefore it'll only ask certain questions and not others (and do a lot of other nasty things), all to reach a utility function that it's easier for it to fulfil.

What we actually want, is that the agent be unable to predictably change its utility in any direction by any action (or lack of action). We want a p(C(u)|w) designed so that for all actions a and all putative utility functions u:

So there is a "conservation of expected correctness"; if we have this, the sophisticated cake-or-death argument has no traction. This is equivalent with saying that the prior P(C(u)) is well defined, irrespective of any agent action.

In summary: the sophisticated cake-or-death problem emerges for a value learning agent when it expects its utility to change predictably in certain directions dependent on its own behaviour.

Oh, I missed that, thanks. I tend to think of a possible world in the context of decision theory as something that, for each of your possible strategies, specifies what will happen if you choose that strategy, because that's sufficient information to make the usual (Cartesian) decision theories work. If you interpret your "W" in that way, the cake-or-death problem seems to go away. But I can see the appeal of making "world" mean simply "everything that does actually happen" (meaning you don't include counterfactuals).

What is a Cartesian decision theory? Googling it brings up a bunch of stuff about Descartes and Cartesian stuff in mathematics, but your comment is the only result that mentions decision theories.

By "Cartesian" decision theory, I mean the kind that is standard outside LW, where the decision process that makes the decision is not part of the model of the world. The epitome of this is AIXI (or actually even better, its computable cousin, AIXI-tl), and I think discussions of AIXI are where I got the word "Cartesian" from in this context: AIXI is considering complete models of the whole outside world, but doesn't understand that it's own computations are produced by part of that world, so that e.g. it would be a bad idea to drop a hammer on its own head. This would make more sense if AIXI's sensory input were radioed from the physical world into the Great Outer Beyond of souls, free will, and infinite computing power, and AIXI then radioed back the actions it wants to take, but there were no other interactions between the two worlds -- hence the word "Cartesian", as in Cartesian dualism.

So in the context under discussion here, a "world" is a full specification of the laws of physics and the full current physical state of the universe -- from which you can compute all that will happen in the future... except that you additionally need to know the input that will get radioed in from the Outer Beyond, specified by your strategy.

So it is a description rather than a name. Thank you.

One should note the origin of the phrase: Eddie Izzard's Cake Or Death sketch, about how the Church of England isn't very good at extremism.

I'd summarise the results of your post, just to check my understanding and to allow myself to be corrected.

The utility function of a value-learning agent will change as it encounters evidence, and depending on its actions.

This is a good ideal yet we should note two traps with this approach:

Nothing new here, just carrying on explaining my understanding in case it helps others:

So we'll renormalise the probability of each utility function in the "don't ask" scenario.

A more complex case arises where there multiple actions cause changes in the utility function, e.g. if there are a bunch of different advisors. In these more complex cases, it's not so useful to think about a direction of assignment. The more useful model for what's going on is that the agent must have a distribution over C that is updated when it gets a different model of what the advisors will say.