Is there any way to avoid Post Narcissism? [with Video link]

I tried to stop posting for a semester... that didn't work. If I have an idea, I just feel like putting it out somewhere in the world, and sometimes, that is Lesswrong.

Which is totally fine and doesn't worry me at all.

There is another problem also related to time constraints and posting.

Here is the best TED Talker, Juan Enriquez, talking about Narcissus and other greeks at 4:30 of 6 minutes.

I'm a Post Narcissist. I don't know how frequent that is, and only one person at FHI told me they were an email Narcissus, but maybe there are others, and more importantly, maybe there is a solution. It may not be clear to you what post Narcissism is, if so, throw your arms up in the air, and scream "Victory!" because you just escaped a terrible thing...

Post Narcissism: An absolutely intense eagerness to read your own posts and comments after you wrote them, accompanied by a feeling of flow while doing so, even when you would do much better to just read someone else's post or do something else altogether. Sometimes, but now always, accompanied by a low anxiety that something may be wrong with your writing, and intermittent thoughts about whether it needs changes. Just to set an arbitrary definitional threshold, if you read it three times after posting, you definitely have it. 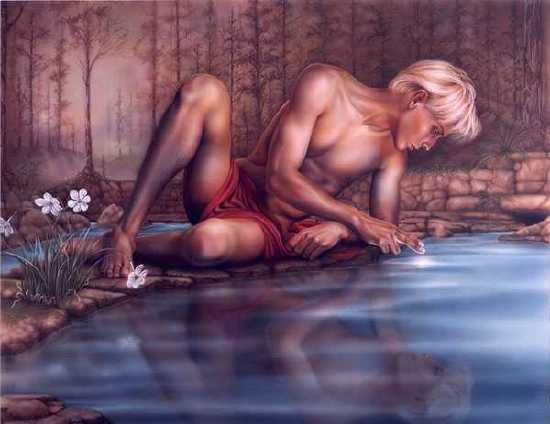 Don't care about actual mirrors. Don't care about making enemies while self-actualizing, don't care wearing beautiful  or awful clothing or showing off whatever physical ability I may have to show off... Don't care about mentioning what makes me shy, or things I'm absolutely terrible at, but oh, the fuzzy feeling inside when reading a set of words that I know is open to public scrutiny. Gets my attention more than Orangutangs, South Park or family members, more than latest Google scholar new publications updates on Philosophy of Mind. More than the weather, an impending deadline or a self imposed rule.

I know that others must suffer from this condition as I do. And maybe there is a solution... If you don't know a solution, post suggestions, if you do know a solution that has worked, please post it.

Serious suggestion: turn this talent into a career as a writer.

So you want to become a post-narcissist?

I think you mean a post-post narcissist.

You are a mean and chaotic evil commenter 95% of times. I do love it when you do the opposite... or, well, at least, something sarcastic and fun.

I find it half boring and half unpleasant (due to noticing errors) whenever I read stuff I wrote, and I often find myself re-using material I've written in online debates, which requires re-reading to take out things I have changed my mind about. I wish I could feel flow while doing it.

Same here - if I wrote quickly, I'll see things that need rewriting, and if I already edited extensively, I'll be sick of it.

I'm actually surprised that most people here seem to have the opposite feelings!

The name is kind of misleading... I thought post meant "after" in this context, and I was excited to see what this new exciting form of narcissism was.

I like rereading my own writing, but not enough for it to be a major time suck.

Do you think it's mostly that you like your writing (after all, you've optimized it to be the way you want it), or that you're hooked by a low-stress pastime?

My name is Cyan, and I am a post narcissist.

So am I! I re-read the stuff I write upwards 7 times (blog posts/editing fiction I write) because I want to make it perfect. I'm not necessarily sure its a bad thing, though.

I have been free of post Narcissism for about 1400 milliseconds if you don't count the time it took me to write this sentence. Hi Cyan! :)

I am a post and comment narcissist. Big time. (I think rereading a mere three times is a ridiculously low threshold.)

And the voting makes it many times worse. This is why I've basically withdrawn from active participation here.

Haha this is hilarious. I had no idea that such a thing could exist, but I realize that I must have it. Rarely are the times I write something at length and even rarer those are the times I post on a persistent forum. Though when I do so reading my own words gives me such a strange and undeserved feeling of nervous glee. A great urge to immediately correct mistakes which I see overcomes myself. Yet years later some few texts I have written, undeservedly recorded; they bring me back to the day when I wrote them.

Anyhow I had not noticed til now because of the small volume; I barely write and when I do I rarely post it.

I just came to note that I'm reading through my relatively few posts here, and the above is still true.

I knew exactly what you were referring to just from the title.

ie. I get that too, and quite badly.

It is most acute immediately after posting, with time length proportional to the emotional mass of the post. Therefore, I should strategically post big things so that I'm not working on something else important right after.

For example this sunk me for the second half of Sunday, and probably monday as well.

Post Narcissism: An absolutely intense eagerness to read your own posts and comments after you wrote them, accompanied by a feeling of flow while doing so,

I always thought this was more common than not, a less severe version at least. However I have the full blown case.

Oh, I have a terrible case of PN. I've been known to go back and read debates from years ago, just to remember the arguments I was in at the time. And I'm always terribly sad at the idea of something clever I do not getting an audience.

/me just reread all his posts going back this far, and figured it's as good a place to stop as any.

Have you tried just forcing yourself not to read your own posts? Or is it something you can't help with?

Why did the image of Narcissus disappear? (Says me upon the fourth reading...) (Edit: It is back, 7 readings and counting. Also, If I re-read it 7 times, it is worth at least 35 karma to me to get this response, I'll keep linking in, and paying the price, until people come up with cool ideas of what to do, or post their own version of the same issue in a less personal manner.)

Not enough empathy for others, or not enough self compassion for youself? Let's re-re-visit your narcissism. First, the only issues arising for it are those which harm you. Otherwise, who cares? Do what you want. I don't mind, for one.

"Self-compassion is extending compassion to one’s self in instances of perceived inadequacy, failure, or general suffering. Dr. Kristin Neff has defined self-compassion as being composed of three main components - self-kindness, common humanity, and mindfulness.[1]

Much of the research conducted on self-compassion so far has used the Self-Compassion Scale,[1] which measures the degree to which individuals display self-kindness against self-judgment, common humanity versus isolation, and mindfulness versus over-identification. Research indicates that self-compassionate individuals experience greater psychological health than those who lack self-compassion. For example, self-compassion is positively associated with life-satisfaction, wisdom, happiness, optimism, curiosity, learning goals, social connectedness, personal responsibility, and emotional resilience. At the same time, it is negatively associated with self-criticism, depression, anxiety, rumination, thought suppression, perfectionism, and disordered eating attitudes [1][5][6][7][8][9][10]

Although psychologists extolled the benefits of self-esteem for many years, recent research has exposed costs associated with the pursuit of high self-esteem,[11] including narcissism,[12] distorted self-perceptions,[13] contingent and/or unstable self-worth,[14] as well as anger and violence toward those who threaten the ego.[15]

It appears that self-compassion offers the same mental health benefits as self-esteem, but with fewer of its drawbacks such as narcissism, ego-defensive anger, inaccurate self-perceptions, self-worth contingency, or social comparison.[7][16]"

Let me tell you perform ‘self-compassion’.