Shared Car: One Year In

We've been sharing a car with a housemate for one year now. This has worked really well. It's convenient being about to drive places, we can leave the car seats in (though we keep a backup set in case we need to go somewhere when the car is out), and it's less thinking about transportation. Neither we nor our housemate use the car that often, so it's rare that we both want to use it at the same time. We do have pretty different usage patterns, however: 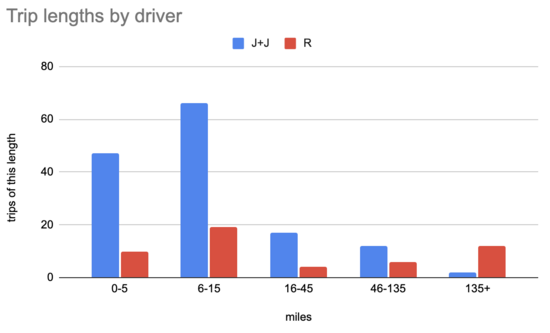 We have a larger number of shorter trips, while our housemate has fewer longer trips:

Our biggest category by far is driving to the next town over to visit my dad (and other family), 6mi round trip. Most weeks we drive over on Tuesday for family dinner, and then many weeks another time as well. Before we had a car we would typically take the bus over, and then either take the bus back or my dad would give us a ride. With covid these weren't options (we weren't being inside with people we didn't already live with), and would instead bike there and back with a trailer. Driving is much faster than either of these, and a lot more convenient.

In figuring out whether it made sense for us to get a car, Julia and I had made some ballpark guesses about our usage:

This was 137 trips (96% actual), totaling 4,180 miles (186% actual). The biggest delta here is dance gigs: in April 2021 I'd expected that vaccination rolling out meant dances would resume, but then there was Delta, seasonality, and Omicron. I think I drove to two gigs (Worcester twice, with Kingfisher in November and Gianna and Rebecca in March). With that corrected the guesses would become 124 trips (87% actual) and 1,480mi (66% actual). Looks like we're using the car in more situations than we'd expected, by a factor of ~25%?

There was one day when we tried to use the car but couldn't: the battery died, probably just from age. Aside from that, no other reliability issues. Maintenance expenses have been pretty low: a total of $319, most of which was an oil change and the replacement battery. At the same visit we also had both the front and rear axles replaced as part of a recall, fully under warranty. We didn't itemize gas, but it's an efficient car (~32mpg) and based on the total mileage and average cost of gas our portion was probably ~$200. Our half of insurance was $515. This comes to about $0.39/mi, plus depreciation (which for this very strange year was negative). I do expect higher expenses in future years: the car is ten years old, and there are a lot of things that can wear out.

Overall, this has been great and I'm happy to continue with it!

About that battery, a car battery can get wrecked just from disuse. I’ve twice done that, left the car undriven for several weeks, and found the battery not just flat but unable to take a proper charge afterwards. Since then, I make a point of ensuring that the car gets driven at least once a week.

You can also just get one of the little "trickle" chargers that will keep the battery charged and healthy without stressing it. Some will have a small plug attachment you can then make the maintenance process a bit cleaner looking (and a bit more certain in terms of always have good connections).

Likewise. I had this happen during the 2020 pandemic to my regular car when it simply wasn't driven for a few months, and it happened a few weeks ago with a truck we use for local short errands - I went to go get a replacement tire for that car, and it didn't start. The errands just aren't long enough to keep the battery topped up, apparently. (Then we discovered the terminals were so rusty our jumpstarting failed... Always fun to hit an error cascade.)

In this case it appeared to be the original battery. If it really was, lasting 10 years is pretty impressive!

It's rare that the car goes a week without being driven, since we drive over to visit my dad almost every week.

You have detailed mileage information, from apparently 190 "trip" data points.  Was this being automatically recorded?  If so, I'd be interested to know how that was achieved.

We just write it down in a notebook we keep in the car: [initials, date, mileage out, mileage in]. This does mean a tiny bit of duplicate recording, since my mileage out is generally going to be the previous person's mileage in, but sometimes people forget to write it down so recording both on pick up and drop off is more reliable.