I started using dictation for entering text on my phone and computer when my wrists suddenly went really bad, but while my wrists are enough better that I can often type there are still a lot of cases where I dictate. Even people whose wrists are fine would benefit from trying it out:

There are some downsides, however:

Still, I do think most people would benefit from trying it out, especially on the phone. It takes a little getting used to, but mostly you talk and it writes things down. On Android it's just a matter of tapping the little microphone on the on-screen keyboard: 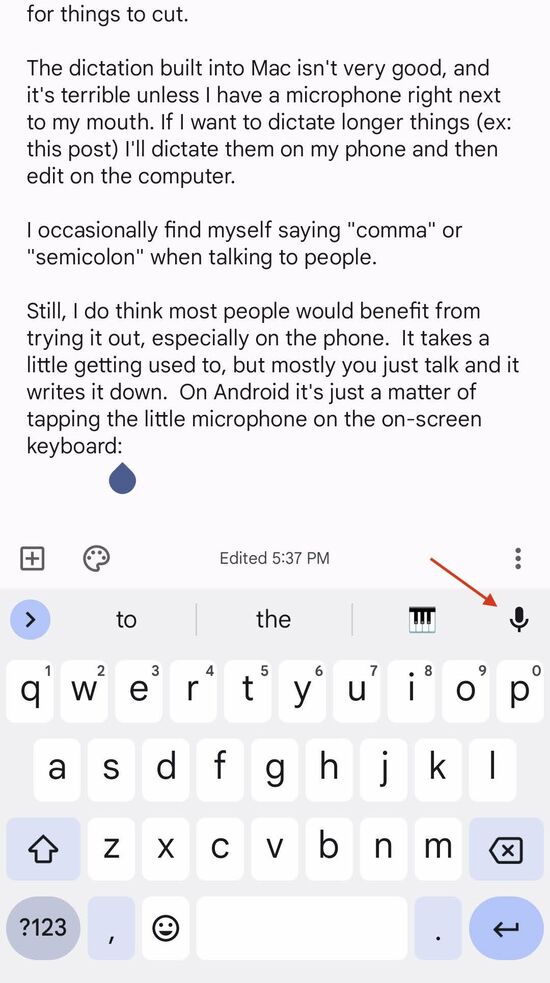 I found that when using voice dictation, I can do journalling and diary-writing much better (versus when I type). My thoughts tend to go deeper, I get better access to my emotions and I tend to have more awareness. Especially when I sit in a comfortable place with my phone (or walk), being able to look around and lift my eyes off the screen.

Reply
[-]the gears to ascenscion5d 50

I use and love https://talonvoice.com/ on my desktop

as you've noticed, spoken word tends to contain more redundancy, likely for assisting noise and attention issues on the part of listeners, which is why it translates a bit poorly to written. I find spoken best for generation and outlining, followed by editing.

I suspect most people are not bottlenecked in their everyday work productivity by the power of their computer, but by their input and display devices and by ergonomics. When I bought my new laptop recently, I sacrificed $350 worth of power in exchange for:

For grad school, I work in many locations - home, the lab, class, flights, my girlfriend's house, my parents' house, her parents' house - and investing in a comfortable, portable computing interface has transformed my productivity.

A folding laptop stand (nexstand) + keyboard and mouse worked well for me.

I'm surprised that swiping on the phone is not more popular. All it takes is one thumb or finger and the speed is as good as with on-screen buttons, though you often trade typos for autocorrect errors.  Easy to switch if your main digit gets tired, too.

I don't like dictation because the error rate is higher (admittedly I have a foreign accent), and correction is cumbersome. If I need to say something, I can send a voice message, which most messaging platforms support natively.

None of these come close to the speed, accuracy and convenience of your regular touch typing.

Reply
[-]the gears to ascenscion5d 20

it hurts my fingers badly. I use dictation when I can't use my hands.

Yeah, I can see that. Probably does not work all that well for coding.

What dictation tools are using the most advanced AI? I imagine that with newer models like Whisper, we're able to get higher accuracy than what the Android keyboard provides.

Reply
[-]the gears to ascenscion5d 40

whisper is the strongest model I'm aware of being able to download, but it doesn't work great for real-time use or commands. talon is far better for configurable computer control and about as good as Android keyboard at dictation. there are commercial services even stronger than whisper.