About 10 years ago I stopped bicycling very much, because my knees hurt. Since then I've mostly gotten around by walking, running, and public transport. With COVID, however, I've started bicycling more, and initially my nees were hurting again a bit. A couple weeks ago I bicycled about half an hour to get somewhere, and by the end my knees were hurting a lot. On the way back, I decided to try a technique from hypermiling: pulse and glide.

I put the bike in mid gear, stood up, leaned over the handlebars, and pushed hard through about three rotations of the pedals. Then I sat down and coasted for about 30s. I repeated this all the way home, except for one hill that was too steep for any coasting, which I walked up. When I got home, my knees felt decent.

I tried this again on Thursday (40min round trip), and then again yesterday (1hr round trip). My knees feel totally fine!

I initially expected that this would be significantly slower, but, for me, I think it's actually faster! Normally I bike slowly, trying to keep things easy on my knees, so this is a bit of a low bar. Looking at my most recent trip, I biked 5.0mi in 29min, and Google Maps predicts 31min. I'm usually more like 30% slower than Maps predicts. 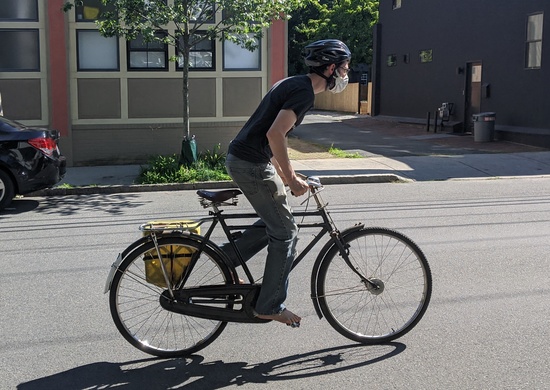 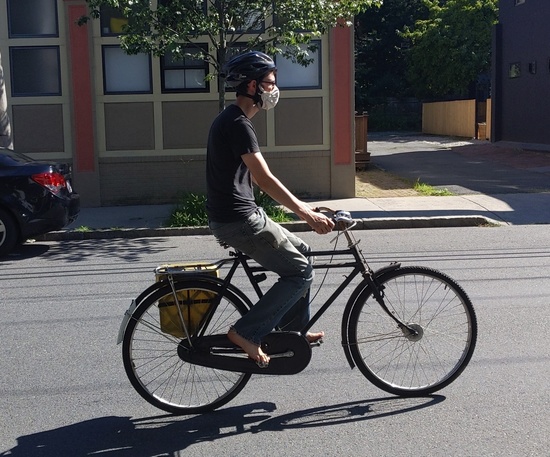 One thing I like about pulsing is that it works really well with traffic lights. I can choose when to pulse and went to coast, and generally get to lights when they're green. I am willing to go through red lights on a bike after looking around carefully to make sure that I have sufficient visibility and there's no one coming, but it's still much faster when green since you can stay at full speed.

I had an idea last night for how one could make a bicycle that was even better suited for this kind of intermittent pedaling. When you pulse, you're turning your body's energy into increased speed on the bike, and then in coasting you lose that speed to rolling and air resistance. Since the bicycle isn't all that aerodynamic, and air resistance goes up (linearly) with speed, it would be nicer to store that energy mechanically instead of kinetically.

What if you added a spiral ribbon torsion spring, like the mainspring in a clock or a wind-up toy, to the drivetrain? It could go inside the rear hub, functionally between the axle and the shell. When you pulse, you accelerate but you're also winding the spring. When you coast the spring unwinds, helping turn the rear wheel. You need a ratchet to keep the spring from driving the pedals in reverse while coasting.

You also need a way to keep it from driving the wheel when you're trying to slow down. I'd put a coaster brake on it, and have backpedaling disengage the spring. For bonus points, use the momentum of the wheel to wind the spring, as regenerative braking.

You could combine it with planetary gearing, with a bunch of fiddly engineering, but it would work out of the box with a standard derailleur system. I expect if I spent a while looking through historical patents I would find something like this, since all of the technology involved existed during the heyday of bicycle inventions. Which also makes me think there's something important I'm missing that keeps it from working, unless it was just that the materials weren't up to it, and perhaps are now?

Ergonomics! Raise your seat to get full or almost full leg extension. Raise you handlebars if needed. Experiment. I find that slight adjustments to the bike make a big difference in where I get sore.

Also, look into interval training / HIIT, although this is more about maximizing output over time (cardio) than minimizing pain.

Plus if the saddle is higher, you sit more hinged, which decreases air resistance and thus makes riding easier. If that makes your rear hurt, get a different saddle, such as https://sqlab-usa.com/collections/saddles/products/602-m-d-active-saddle.

Here's a guide for setting up a bicycle correctly: https://bike.bikegremlin.com/360/setting-up-riding-position-bike-fitting/ They do it the way I do it and I'ver never had knee problems from riding a bike.

(Just thought: Another reason for knee pain might be riding with knees collapsed inwards.)

I'm piling on with others pointing out that your seat seems too low. I also am surprised that you're having knee pain but seeing the photos of you riding explains that.

If you like bicycling, I'd also suggest looking into getting a better bike. Yours looks heavy, which might also explain your pain and discomfirt.

I think someone else also made this point, but I've personally noticed that too low of a gear can be less comfortable/efficient as well. Professional cyclists maintain extremely high rotational speeds but I don't think that's sensible for anyone else generally. (And some pros use higher gears and slower pedaling too anyways.)

I think you might be better served by using a slightly higher gear and adjusting your seat upward so that your leg is at full extension when the relevant pedal is at the bottom of its rotation. I expect that's the main reason you're seeing an advantage, you're using more of your leg in the pedaling motion, which is more efficient. And would be even more efficient if you weren't having to balance your weight on your pedals. Look at how professional cyclists have their bikes set up. Obviously you won't exactly replicate that without toe clips that you won't want to use, but that's where I'd look for improvements as opposed to reinventing the wheel.

The comments about raising your seat are spot-on. The ergonomics in your seated photo look way off. Your local bike store can get you fitted into a bike that's appropriate for your build and help you set the seat and handlebars. Can't promise that your knee troubles will go away, but there's a decent chance. Frankly, I've never heard about someone who has no problem with their knees while running, but has knee problems on a bike.