Huge parts of our societies are managed in non-democratic, bureaucratic way. (I am using the term bureaucracy in the old Weberian sense. If you are living in XXI. century feel free to replace the word bureaucracy with technocracy - although, I guess, in technocracy the bureaucratic positions are filled by scientists and engineers rather than by landed gentry as was the case in Weber's Germany.)

A nice little example of this dilemma is central banking.

I am not a historian, so I am not going to deal with the emergence and early times of central banks, however, my understanding is that the meandering between the political control and bureaucratic independence has always been there. (The banks emerged as private enterprises with state monopolies, then got nationalized etc.)

When entering the modern times, there was a strong political influence in most central banks.

This was causing problems. Think of it: Why not induce a short term boom before the elections to get voter support for the incumbent party and then compensate by deflating after the votes are counted? But that means that the central bank doesn't do what it is supposed to do, namely to react to the existing economic circumstances and keep the economy afloat. Rather it just follows the electoral cycle. What's worse, financial markets can take advantage of those predictable shifts in monetary policy and simply price them in.

To be more bland, here's a graph from 1993 paper by Alesina and Summers showing how inflation rate correlates with the independence of the central banks from the politics: 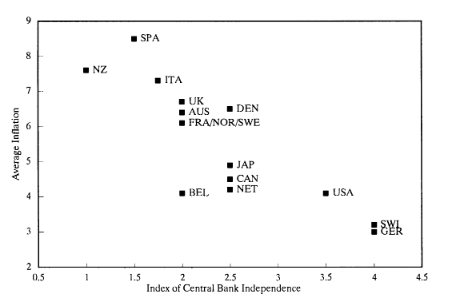 In 1990's there was a large shift towards central bank independence, that is, away from the democratic and towards the bureaucratic control.

Note that these were 1990's, the times of "end of history" and the heyday of the democracy after the fall of the Ostblok. Yet, apparently, central banking has just too important to be left to the democratic control.

If you like anecdotes better than theory, here you go: When President Erdogan of Turkey announced in 2018 that his first act after re-election will be to take control of interest rates from the Central Bank of Turkey the Turkish Lira quickly dropped by 10 percent.

But not all is rosy with the bureaucratic approach, especially after the 2008 crisis. In places, where the central banks were involved in bailouts they were suddenly asked to do politically highly salient decisions. To choose who to bail out and who not to. To pick winners and losers. This become so political that, for example, Slovenian central bank governor has resigned after receiving death threats.

The problem became very apparent in handling of the Greek government-debt crisis by the so called Troika (European Central Bank, European Commission and IMF). European Central Bank was established in 1998 and it is very independent even as central banks go. Suddenly, the unelected bureaucrats from ECB were supposed to decide on the fate of entire nation and, not surprisingly, most of the people in Greece felt that was wrong.

Now, I am not claiming that I fully understand the problem. However it seems to me that the democracy/bureaucracy dilemma is not going to be won by either of the sides. More likely we are going to preserve the mix of the two. Quite possibly, it's not even a zero sum game and instead of shifts in power between the two we'll get stronger democracy keeping more powerful bureaucracy in check. In any case, the case studies, such as the history of central banks, are going to important to understand how the efficient balance should be established.

Now, it turns out that the Fed was designed not by politicians, or bureaucracy, but instead by special interest groups (namely Wall St.). See The Meeting at Jekyll Island

To be more bland, here's a graph from 1993 paper by Alesina and Summers showing how inflation rate correlates with the independence of the central banks from the politics:

To me that chart looks a bit fishy if you see independence as being opposite of democracy. Given Germany the maximal score of indepence of the central bank when all of the executive board is appointed by people who are democratically accountable seems strange when there are countries like the US where a good chunk of the seats of the executive board aren't chosen by people who are democratically accountable.

Whether or not you let banks (shareholders) decide about who gets appointed to the executive board of a central bank or let democratically accountable people decide is a question that's distinct from whether those people are independent from the people who appointed them once they are appointed.

The graph seems to have been made in 1993 which is 3 years after the German channlor got the president of the Bundesbank to resign because of policy differences.

If a German political party would adopt in it's platform NGDP targeting which Eliezer Yudkowsky recommended, they could focus on appointing people to the executive board that believe in NGDP targeting.

When it comes to Democratic accountability it also feels like you ignored the Elephant in the room. Democratic accountability is not just about election but it's also about understanding what people do to be able to criticize their decisions. Removing the power to do trillion dollar deals in the dark from burocrats lists their power but might very well make the whole system more efficient.

I am not an economist, so it's hard to me to judge the quality of the paper. In fact, I was just trying to show the kind of argument made for bank independence at the time. Feel free to check the paper for yourself: https://debis.deu.edu.tr/userweb//yesim.kustepeli/dosyalar/alesinasummers1993.pdf Section 2. is about measuring the central bank independence.

It seems to cite among others Bade and Parkin's Central Bank Laws and Monetary Policy from 1982.

When it discusses Italy where shareholders have the right of proposing candidates and the government needs to approve them, it judges the government as having complete control.

In Germany where the Federal government appoints some members and the Bundesrat (body of the state governments) appoint others they judge the system as a self-perpetuating oligarchy. To the extend that they are it's because the job they are doing is valued by the ruling parties in Germany so they listen to their recommendations about who to appoint.

This seems like a problem with representative democracy: creating long-term problems for short-term increase in popularity. I wonder how much this problem exists in Switzerland.

Making an important institution independent forever, that also has a potential to create problems. What if they start doing something obviously wrong (e.g. just shamelessly transparently stealing money), and no one will be able to stop them? I suppose there would still be an option to write a new law that takes away their independence... but then again, why don't current political parties do the "take away the independence of central bank + do something populistic" combo now?

Seems to me that a good balance was reached somehow, and I am completely confused about how was such thing even possible. (Could we replicate the same strategy in other aspects of governance?)

This strikes me as something akin to a not-quite alternating Prisoners' Dilemma. The party in power can unilaterally take the selfish option (goose the economy for electoral benefit) or not. Over time there are three types of outcomes. 1) if you act selfishly when given the chance and I don't, I'm a chump (and vice versa); 2) if neither of us act selfishly, we're even; and 3) if we both act selfishly we're still even, but the economy is worse overall because we keep flooding the information system (prices) with noise.

One natural solution would be for all parties to agree to remove the option to act selfishly and lock in outcome #2. Such a setup, then, can emerge from all parties initially consenting, just as Odysseus asked his men to bind him to the mast. (Of course, this system can also arise in less consensual, more problematic ways.)

The idea of a civil service seems similar in spirit. Each party might prefer to stuff the bureaucracies with their cronies and use all the various Assistant to the Regional Postmaster positions as electoral giveaways, but of course the tables will get turned when they lose and who knows if any of those people are even marginally competent.

(In both examples, though, the solutions have their own problems, since we can't escape tradeoffs.)

There doesn't seem to be any technical issue with making this both democratic and independent: have a direct election for central bank boards? This creates a divide with "normal" politics and creates more democracy.

Maybe not all seats are up for (re)election any given year?