We would like to thank the following people who contributed to the generation of ideas and provided feedback on this post: Alexandre Variengien, Daniel Filan, John Wentworth, Jonathan Claybrough, Jörn Stöhler, June Ku, Marius Hobbhahn, and Matt MacDermott.

We are a group of four who participate in SERI ML Alignment Theory Scholars Program under John Wentworth, and we are extending the paper “Discovering Latent Knowledge in Language Models Without Supervision" as we see it as an interesting direction where we could contribute concrete progress towards alignment.

We have a number of potential directions we could explore. The goal of this post is to get feedback on them early in order to prioritize better.  This could be confirmations for the good ideas, reasons why certain ideas might be bad, references to existing similar attempts or relevant literature, potential failure modes, and generally (constructive) criticism of any kind.

Although we're all involved in all parts of the research process, the structure of our group and our main roles are as follows: Kaarel Hänni is our theorist and the main contributor of ideas; Walter Laurito and Kay Kozaronek are our experimentalists who focus mainly on deploying and running the code; Georgios Kaklamanos is our distiller and focuses on writing up and presenting the results (e.g., this post).

Brief summary of the DLK paper 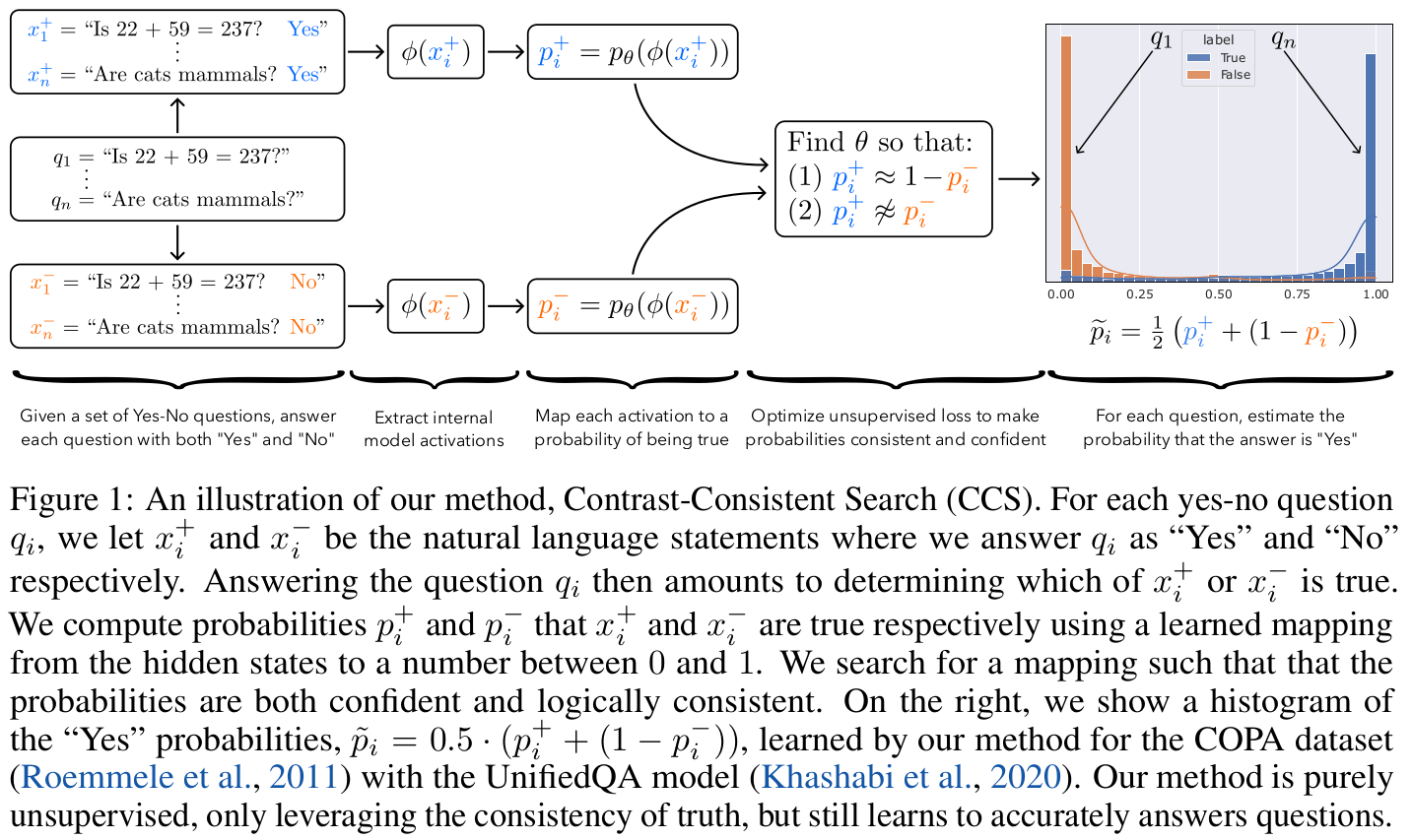 In case you haven’t read the original paper, you can get a quick overview from the following Twitter Thread from the author (alternative Threadreader link). Here we’ll just mention a few key points relevant to the things we want to work on. The above figure from the paper outlines their process in a clear way.

Reproduction and replication of the original paper

We have started setting up and running the paper’s code to see if we can obtain the same results. The authors provided their code on GitHub. Furthermore, we are creating our own implementation for comparison which will give us a better understanding of the paper and more flexibility for testing new ideas.

We’d like to evaluate how using a different inference rule (instead of the average) would affect the performance. Specifically checking which of pθ(ϕ(x−i)) and pθ(ϕ(x+i)) is larger.

Evaluating the robustness of inner truthiness on different prompt formats.

Section 3.2.2 of the paper states that their method is robust when dealing with misleading prompts. They create misleading prompts by adding a prefix, such as the one shown in Figure 1, before they ask the questions. We would like to evaluate the robustness of the model further by using different types of prompts.

They use prompts containing a binary question and an answer:

x+=Q: Is the sentiment of "I loved this movie." positive or negative? A: positive

We could check this for the probe their method learns, or train another probe for differently formatted prompts.[2] We want a probe that works with propositions since it is more natural in language to combine propositions compared to the format they’re using (e.g. combining P, Q into the proposition [P and Q] than writing: [Question: Is it true that P and Q? A: __].[3]

Change the projection probe and check how that affects things

We could look at multiple layers simultaneously and find a combination that works better. E.g., we could observe the first, the middle, and the last layer, and take their average. There is a concern that this might lead to overfitting though, since the task is so simple that logistic regression performed well on it.

We want to take the inverse scaling datasets and train a DLK probe for the following models:

Then we want to check if the representation of truth in inner representations is also getting less accurate for bigger models. If that happens, it could point in the direction of the model's understanding actually getting worse. On the other hand, if it doesn't hold, it could point in the direction of the inverse scaling law cases thus far having more to do with something weird going on with output behavior in a given context, and they might not generalize. Also, this seems like a potentially interesting additional testing ground for whether DLK can provide information about the model beyond output behavior.

One part of the loss function they use is the “confidence” term shown above. This term is to impose the “law of excluded middle” to ensure that the model won’t end up giving[5] a p(x+)=p(x−)=0.5, which pushes probabilities to be close to 0 or 1.

However, in reality, there is no rule stating that the probabilities have to be near 0 or 1. So, we would like to test if it’s possible to avoid using the confidence term in the loss function to capture probabilities better in order to have a better representation of the world.

By removing the confidence term, a trivial solution for the model would be to always output the probability of 0.5 for both options. To avoid this, we could have examples in the training data where there are more than two options and require that their own probabilities sum to 1.

As shown in the figures below, the probabilities of these 4 have to add up to 1 (cover the entire area). We could put a term in the loss function that would enforce a penalty if this condition doesn’t hold.

One alternative would be to require all of the following conditions:

Another option would be to take mathematical statements where the possibility space is exhausted by some finite number of options that it’s reasonable to be uncertain between[6].

In general, we’d search for something that satisfies probability axioms. In addition to capturing probabilities better, this hopefully constrains the search space a lot. Additional constraints would be useful, especially if we wish to replace the linear probe with a more complicated probe with many more parameters[7].

Acknowledgment: For this subsection, Kaarel wants to thank Jörn Stöhler, Matt MacDermott, and Daniel Filan for contributing significantly to these ideas in conversations.

We could use the above method to evaluate probabilistic examples directly, e.g. “My next coin toss will land heads”, and check if the above method without a confidence term in the loss does better on these. This would provide a better understanding of how well the probe captures probabilities instead of just capturing truth for certain sentences. It might also be helpful for understanding the calibration of the probe.

Evaluate the performance of CCS after adding some labeled data.

After reproducing the authors’ results, extend the datasets with some labeled examples (i.e., “1+1=2”) that we’d flag as either true or false. We’d then “hardcode” some terms to the loss function to ensure that these data points are considered. The main motivation behind this is to check how the performance of CCS will change in comparison to the authors’ results. The method would still be mostly unsupervised[8], which is nice since it can scale to large datasets without requiring extensive labeled datasets.

Given that they are using a transformer, we could try to see if there is some form of connection to mechanistic interpretability.

We could try to input a passage of alternating true/false sentences and try to see which inner states (i.e. which position) are best for determining the truth of each particular sentence. Are these always the positions of the tokens in that sentence? Does it get more spread out as one goes deeper into the transformer? The hypothesis is that if we can locate the positions that the model looks for in each true sentence, we can trace that to the model's internal representation of the truth.

Check changes in the truth representation when incrementally prepending text to the prompt.

We could have a normal prompt at the beginning and then incrementally start adding text to the beginning and see how the truth representation changes with that. This is important because it gives us another task on which we could validate one of the main claims in the paper, namely that their method reduces "prompt sensitivity".

Check if all neurons lead to ROME

Using interpretability tools (e.g the causal tracing method from the ROME publication), we could check if we can figure out how truth is represented and in which neurons. We could even combine this approach with the previous idea and see if they produce the same results.

Additional ideas that came up while writing this post.

The following ideas were generated by Kaarel while we were in the process of writing the post and trying to re-implement the code. We haven't spent much time refining the phrasing, so they might require slower reading and a deeper understanding of the paper and the method than the above text does. We do this for the benefit of getting feedback early, and we hope to have a better formulation / expand upon them in future posts.

If I were doing this project, the first thing I'd want to check is whether the dlk paper is actually robustly measuring truth/falsehood, rather than something else which happens to correlate with truth/falsehood for the particular data generation/representation methods used. My strong default prior, for ml papers in general, is "you are not measuring what you think you are measuring".

Thanks for writing this! I think there are a number of interesting directions here.

I think in (very roughly) increasing order of excitement:

I’m excited to see where this work goes!

What CCS does conceptually is finds a direction in latent space that distinguishes between true and false statements. That doesn't have to be truth (restricted to stored model knowledge, etc.), and the paper doesn't really test for false positives so it's hard to know how robust the method is. In particular I want to know that the probe doesn't respond to statements that aren't truth-apt. It seems worth brainstorming on properties that true/false statements could mostly share that are not actually truth. A couple examples come to mind.

The last one seems more pressing, since it's a property that isn't "truthy" at all, but I'm struggling to come up with more examples like it.

Nice project, there are several ideas in here I think are great research directions. Some quick thoughts on what I'm excited about:

ETA: I think the "adding labeled data" idea is a good illustration of what I'm talking about. Imagine you have problems where the method currently doesn't work at all. If even large amounts of supervised data don't help much on these, this suggests your probe can't find a truth encoding (maybe because you'd need a higher capacity probe or if you already have that, maybe because the optimization is difficult). On the other hand, if you get good performance with supervised data, it suggests that you need stronger consistency checks. You can then also try things like adding supervised data in only one domain and check generalization, and you can expect a reasonably clear signal. But if you do all this on a dataset where the unsupervised method already works pretty well, then the only evidence you get is something like "does it improve performance by 2%, 5%, 10%, ...?", the signal is less clear, and it's much harder to say which of these explanations a 5% improvement indicates. All that is in addition to the fact that finding cases which are difficult for the current method is really important in its own right.

An LLM will presumably have some internal representation of the characteristics of the voice that it is speaking with, beyond its truth value. Perhaps you could test for such a representation in an unsupervised manner by asking it to complete a sentence with and without prompting for a articular disposition ('angry', 'understanding',...). Once you learn to understand the effects that the prompting has, you could test how well this allows you to modify disposition via changing the activations.

This line of thought came from imagining what the combination of CCS and Constitutional AI might look like.