Attainable Utility Landscape: How The World Is Changed 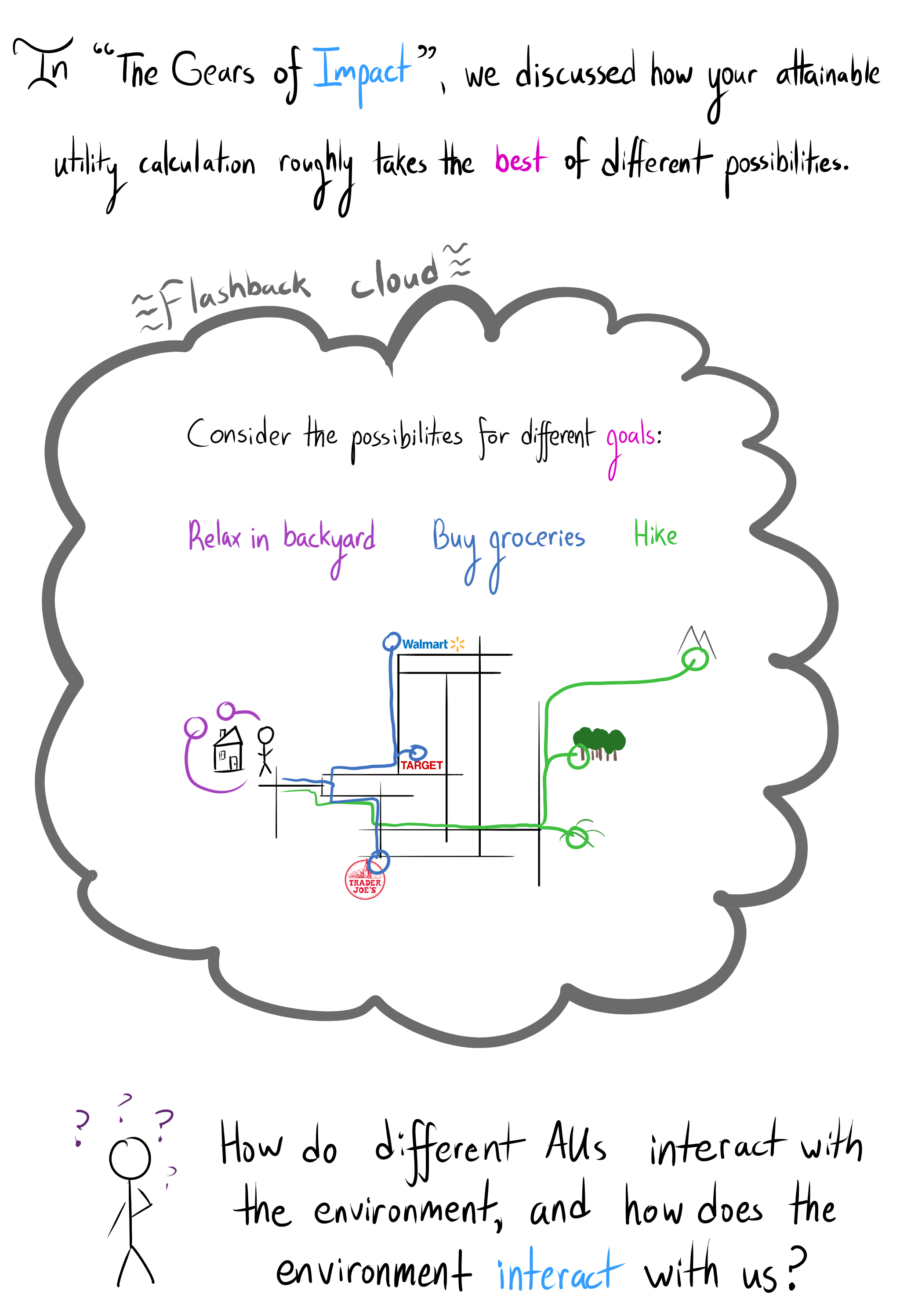 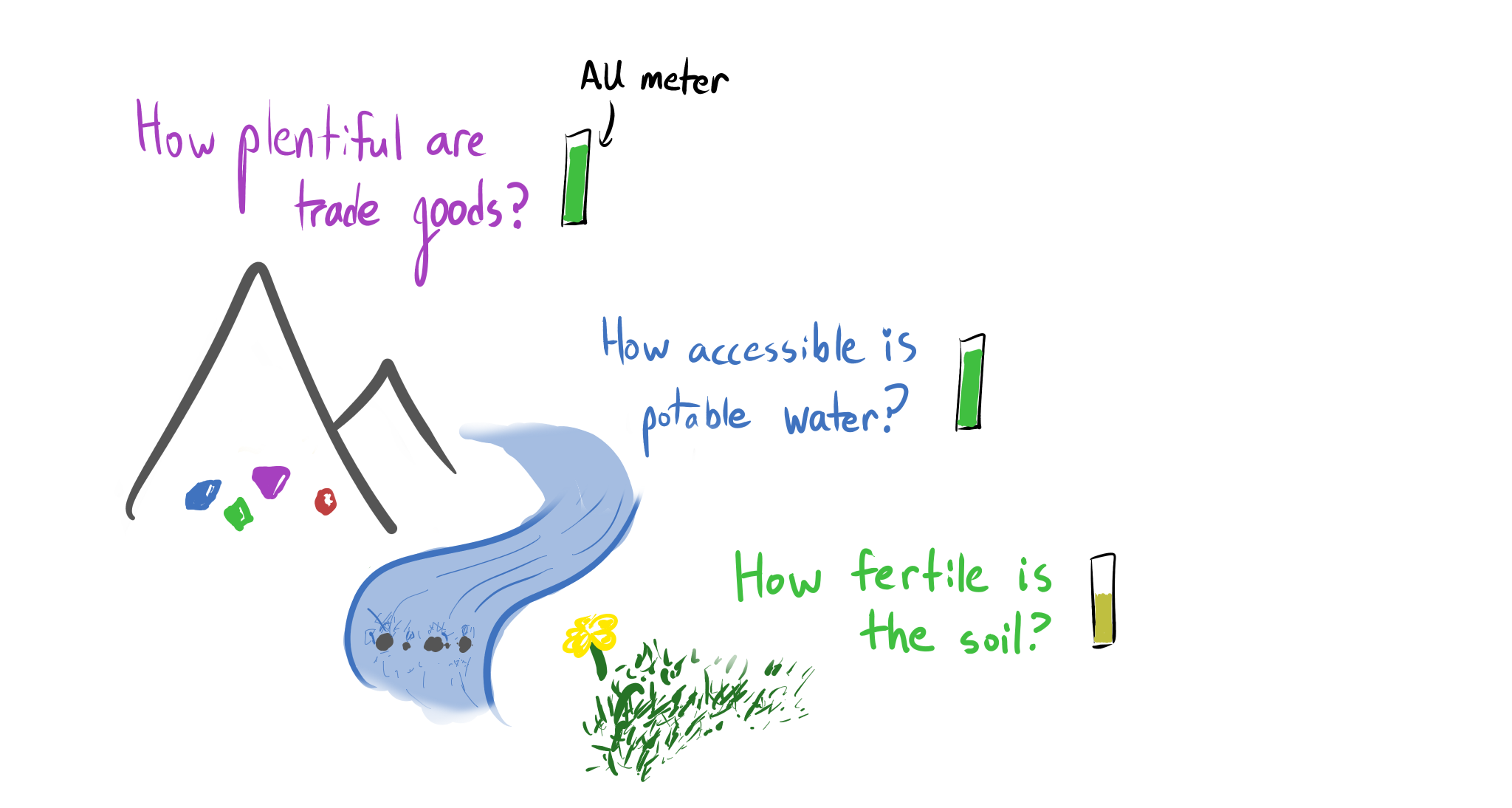 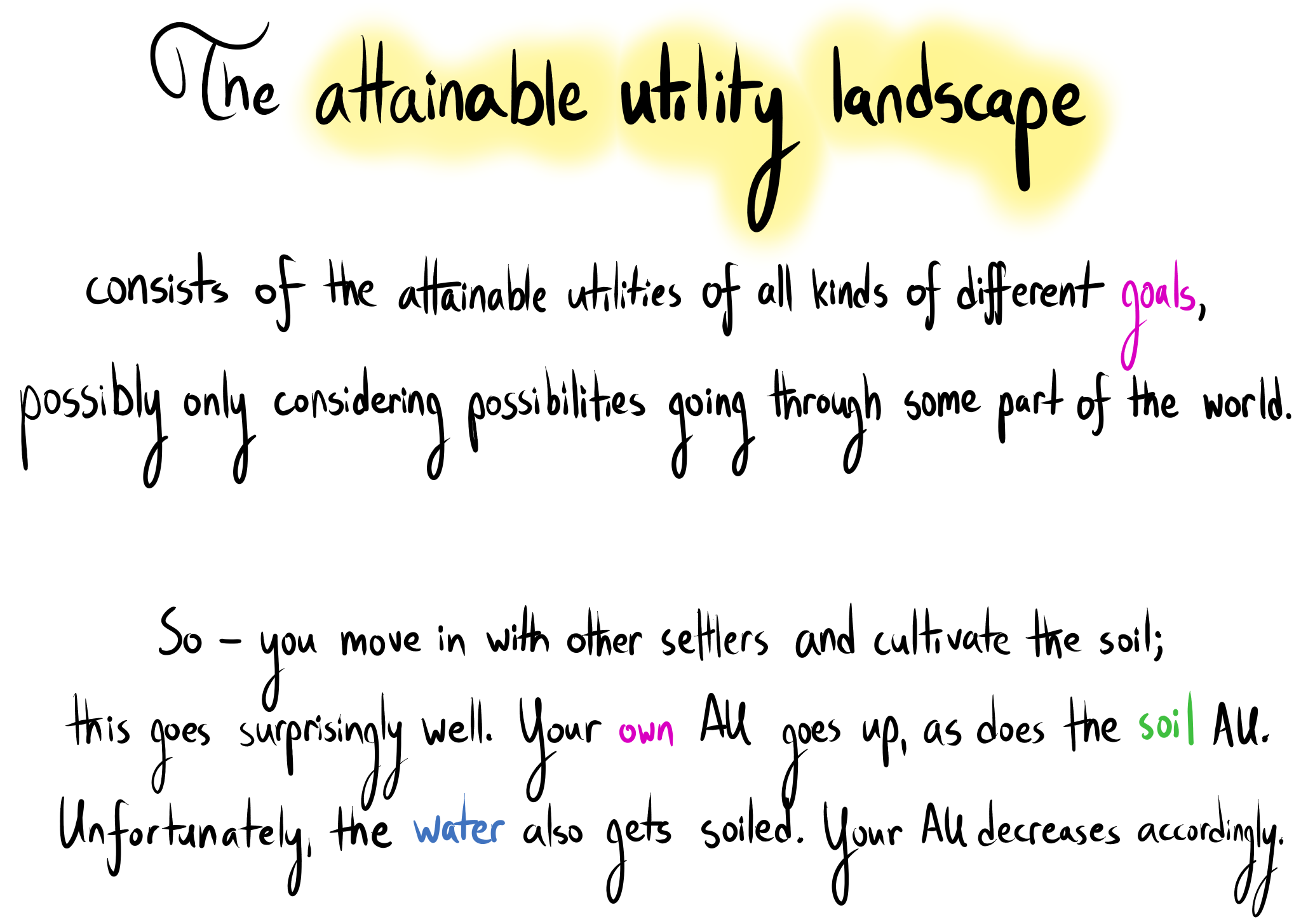 (This is one interpretation of the prompt, in which you haven't chosen to go to the moon. If you imagined yourself as more prepared, that's also fine.)

If you were plopped onto the moon, you'd die pretty fast. Maybe the "die as quickly as possible" AU is high, but not much else - not even the "live on the moon" AU! We haven't yet reshaped the AU landscape on the moon to be hospitable to a wide range of goals. Earth is special like that. 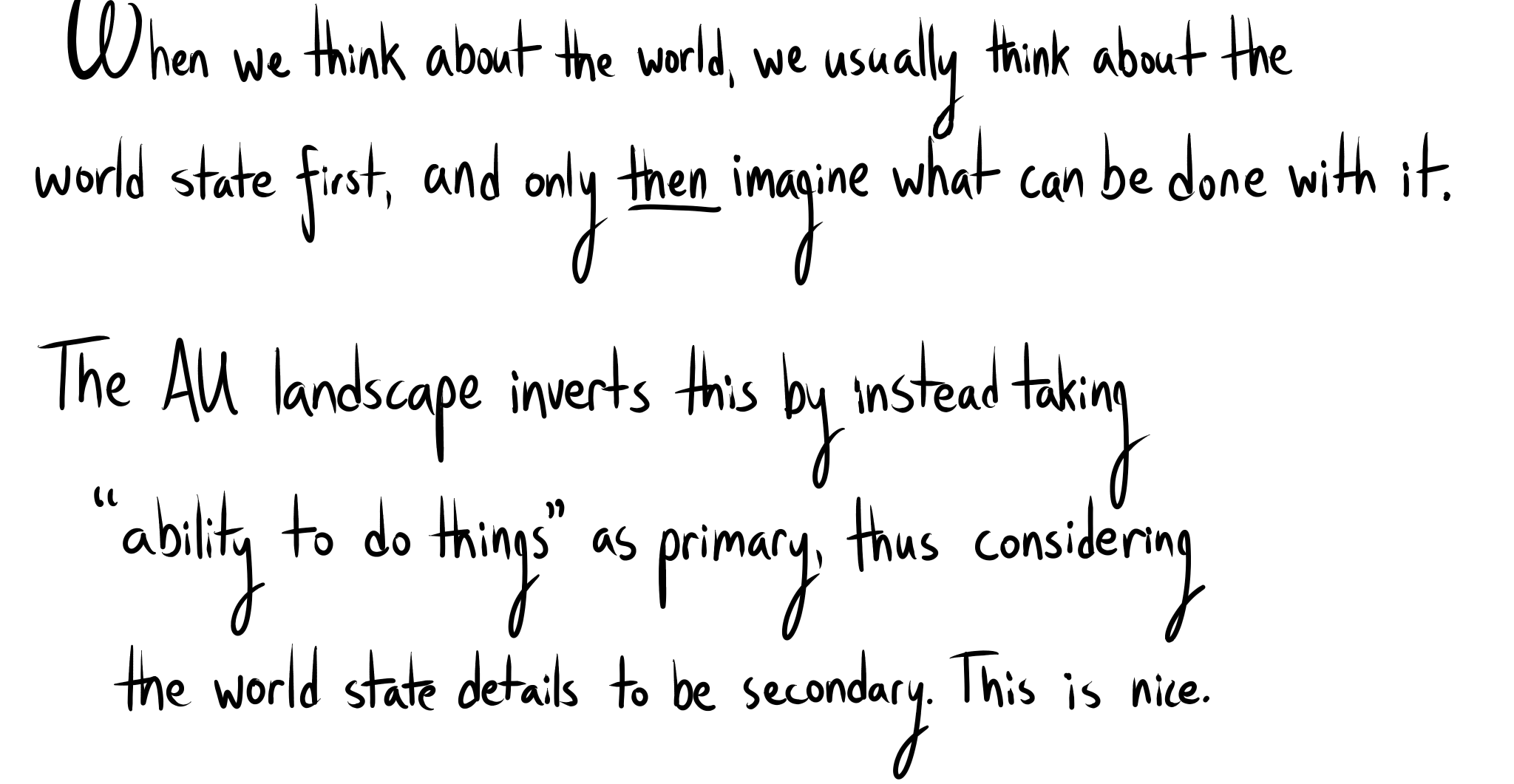 AU landscape as a unifying frame

Attainable utilities are calculated by winding your way through possibility-space, considering and discarding possibility after possibility to find the best plan you can. This frame is unifying. 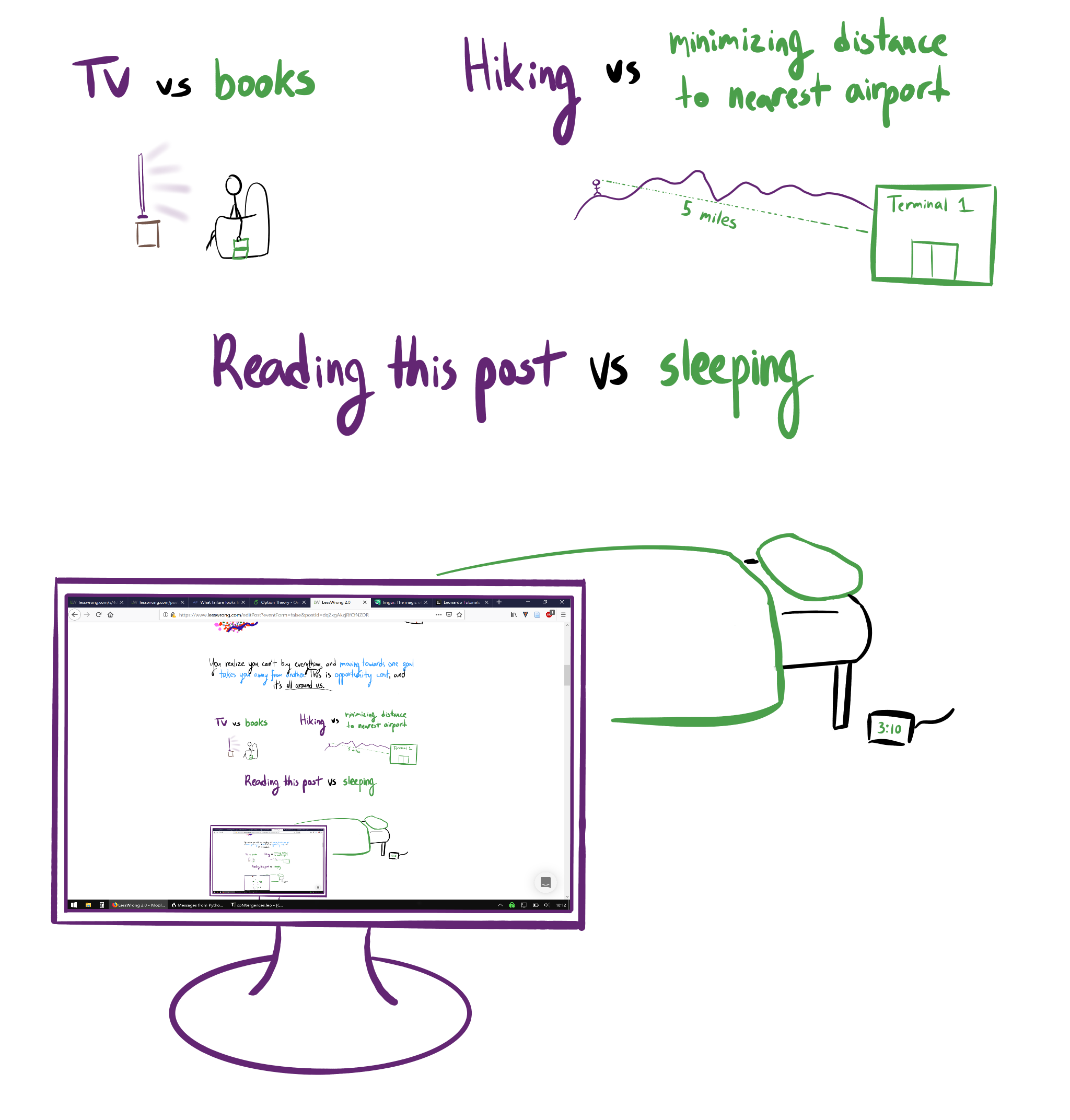 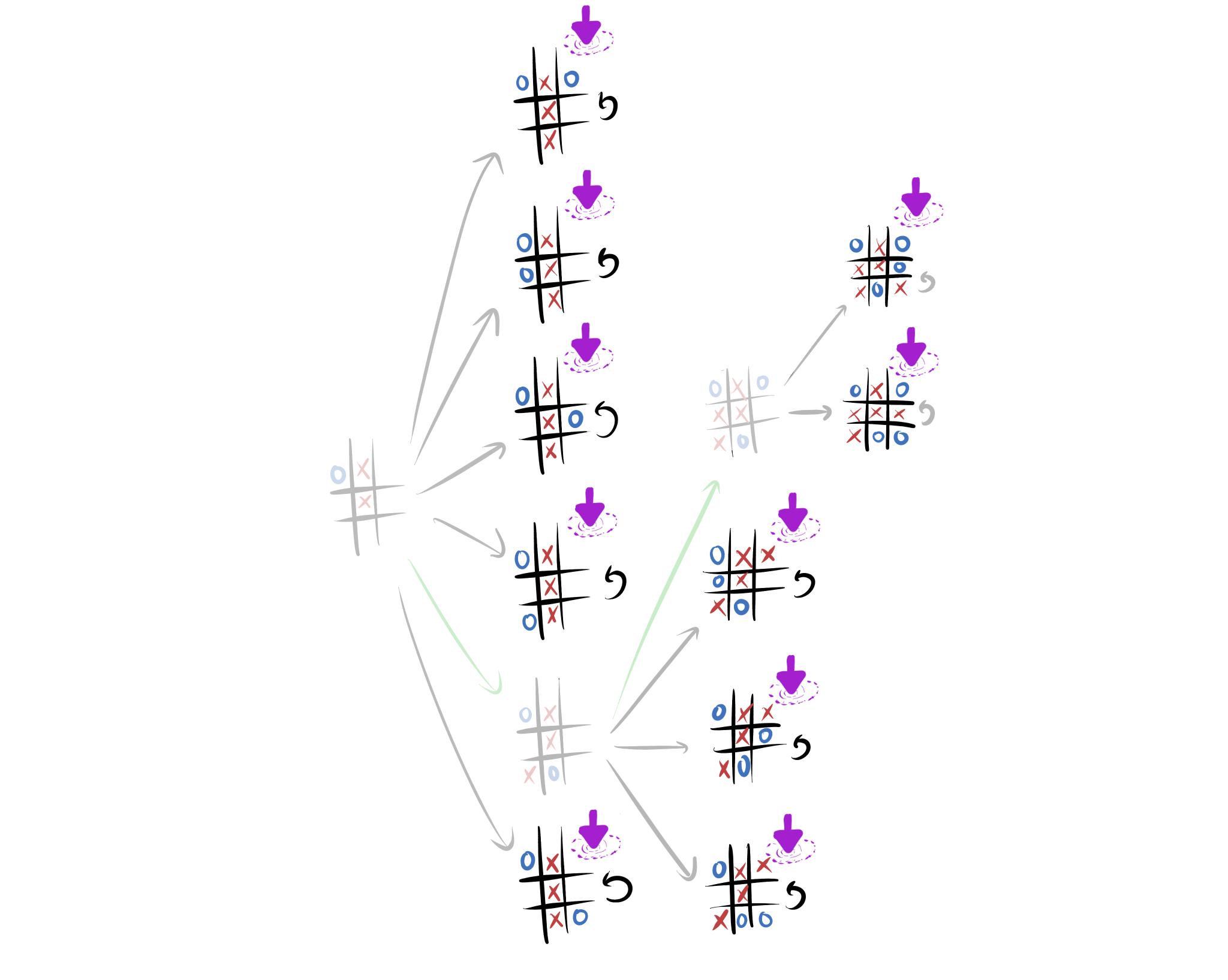 Other people usually objectively impact you by decreasing or increasing a bunch of your AUs (generally, by changing your power). This happens for an extremely wide range of goals because of the structure of the environment.

Sometimes, the best possibilities are made unavailable or worsened only for goals very much like yours. This is value impact. 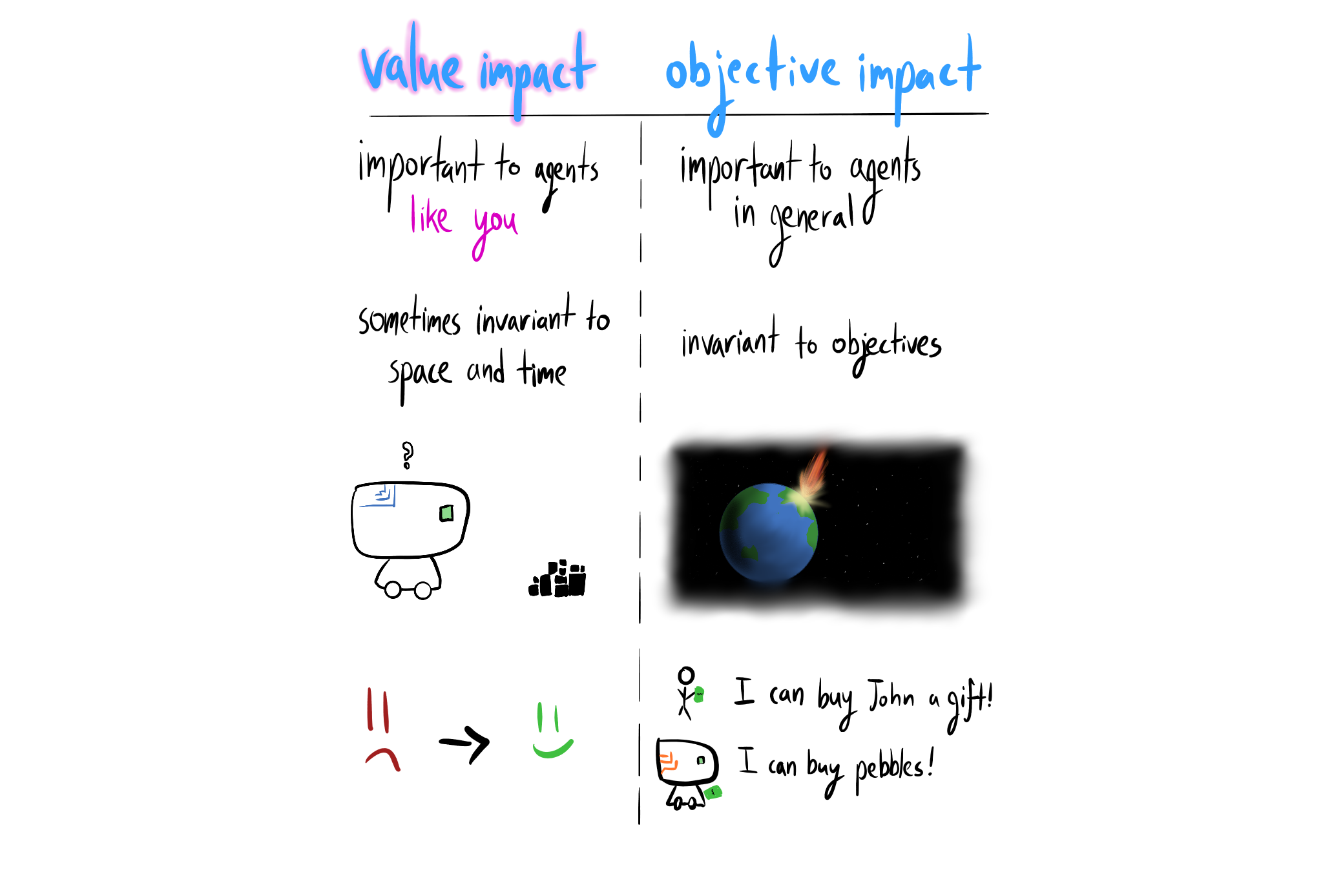 Sometimes a bunch of the best possibilities go through the same part of the future: fast travel to random places on Earth usually involves the airport. This is instrumental convergence. 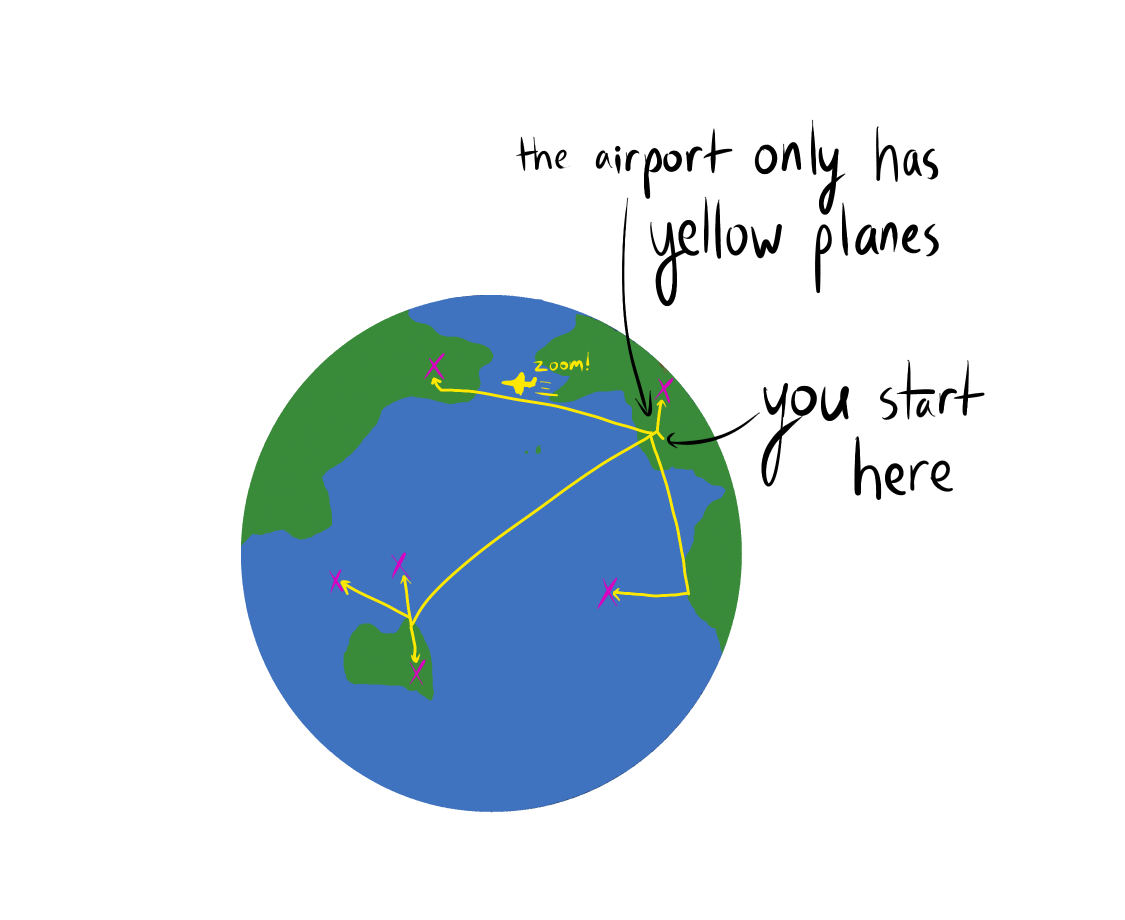 Exercise: Track what’s happening to your various AUs during the following story: you win the lottery. Being an effective spender, you use most of your cash to buy a majority stake in a major logging company. Two months later, the company goes under.

In the context of finite deterministic Markov decision processes, there's a wonderful handful of theorems which basically say that the AU landscape and the environmental dynamics encode each other. That is, they contain the same information, just with different emphasis. This supports thinking of the AU landscape as a "dual" of the world state.

The first key insight is to consider not policies, but the trajectories induced by policies from a given state; to not look at the state itself, but the paths through time available from the state. We concern ourselves with the possibilities available at each juncture of the MDP. 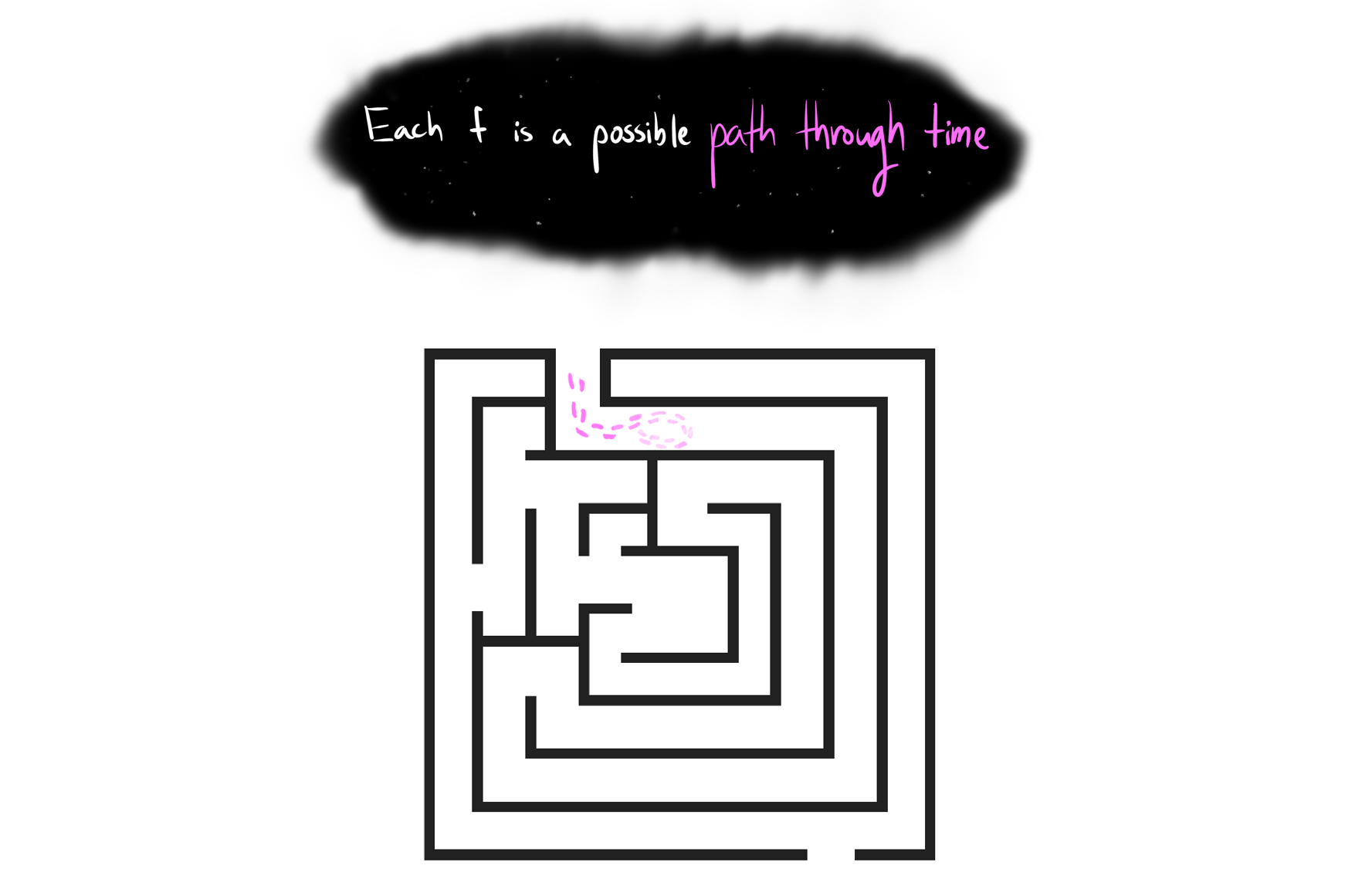 Put differently, the possibilities available are all of the potential film-strips of how-the-future-goes you can induce from the current state.

We say two rewardless MDPs M and M′ are isomorphic up to possibilities if they induce the same possibilities. Possibility isomorphism captures the essential aspects of an MDP's structure, while being invariant to state representation, state labelling, action labelling, and the addition of superfluous actions (actions whose results are duplicated by other actions available at that state). Formally, M≃FM′ when there exists a bijection ϕ:S→S′ (letting Pϕ be the corresponding |S|-by-|S′| permutation matrix) satisfying FM(s)={Pϕf′|f′∈FM′(ϕ(s))} for all s∈S.

This isomorphism is a natural contender[1] for the canonical (finite) MDP isomorphism:

Suppose I give you the following possibility sets, each containing the possibilities for a different state:

Exercise: What can you figure out about the MDP structure? Hint: each entry in the column corresponds to the visitation frequency of a different state; the first entry is always s1, second s2, and third s3.

You can figure out everything: ⟨S,A,T,γ⟩, up to possibility isomorphism. Solution here.

How? Well, the L1 norm of the possibility vector is always 11−γ, so you can deduce γ=.75 easily. The single possibility state must be isolated, so we can mark that down in our graph. Also, it's in the third entry.

The other two states correspond to the "1" entries in their possibilities, so we can mark that down. The rest follows straightforwardly.

Theorem: Suppose the rewardless MDP M has possibility function F. Given only F,[2] M can be reconstructed up to possibility isomorphism.

All of these encode the same mathematical object.

Going to the green state means you can't get to the purple state as quickly.

On a deep level, why is the world structured such that this happens? Could you imagine a world without opportunity cost of any kind? The answer, again in the rewardless MDP setting, is simple: "yes, but the world would be trivial: you wouldn't have any choices". Using a straightforward formalization of opportunity cost, we have:

Theorem: Opportunity cost exists in an environment iff there is a state with more than one possibility.

While understanding opportunity cost may seem like a side-quest, each insight is another brick in the edifice of our understanding of the incentives of goal-directed agency.

Values often seem back driven by beliefs about sensitivity of au. i.e. a person thinks that having 3x current money will be largest impact so they turn themselves into the sort of person who they think has the greatest chance of getting said money. This makes being wrong about sensitivity of outcomes to changes in various inputs scarier, since on expectation one should expect oneself to only do a middling job of keeping one's identity disentangled from their strategies.

Going to the green state means you can't get to the purple state as quickly.

On a deep level, why is the world structured such that this happens? Could you imagine a world without opportunity cost of any kind?

In a complete graph, all nodes are directly connected.

Equivalently, we assumed the agent isn't infinitely farsighted (γ<1); if it were, it would be possible to be in "more than one place at the same time", in a sense (thanks to Rohin Shah for this interpretation).

The opposite of this, is that if it were possible for an agent to be in more than one place at the same time, they could be infinitely farsighted. (Possibly as a consequence of FTL.)

In a complete graph, all nodes are directly connected.

Surprisingly, unless you're talking about K1 (complete 1-graph), opportunity cost still exists in Kn (n>1). Each round, you choose where to go next (and you can go to any state immediately). Going to one state next round means you can't go to a different state next round, so for any given action there exists a reward function which incurs opportunity cost.

The opposite of this, is that if it were possible for an agent to be in more than one place at the same time, they could be infinitely farsighted. (Possibly as a consequence of FTL.)

Things get weird here, depending on your theory of identity and how that factors into the planning / reward process? Can you spell this out some more?

There is a star, many light years away. If you exist in two locations at once simultaneously, from which the star is visible, and those two locations are not the same distance from the star, then intuitively, by seeing the star first from the closer position, you can know what it will look like from the second before it happens.

Less trivially, by altering the relative speeds of the two versions (with FTL telepathy), and setting up suitable devices for signaling, I think in theory, this would enable turning FTL into time travel. (Person A performs a calculation, and sends the results to Person B. Since Person A is the future version of person B, and they're the same person in two places at once simultaneously, then by 'de-synchronizing them right' a message can be sent into the past.)

The technical appendix felt like it was more difficult than previous posts, but I had the advantage of having tried to read the paper from the preceding post yesterday and managed to reconstruct the graph & gamma correctly.

The early part is slightly confusing, though. I thought AU is a thing that belongs to the goal of an agent, but the picture made it look as if it's part of the object ("how fertile is the soil?"). Is the idea here that the soil-AU is slang for "AU of goal 'plant stuff here'"?

I did interpret the first exercise as "you planned to go onto the moon" and came up with stuff like "how valuable are the stones I can take home" and "how pleasant will it be to hang around."

One thing I noticed is that the formal policies don't allow for all possible "strategies." In the graph we had to reconstruct, I can't start at s1, then go to s1 once and then go to s3. So you could think of the larger set ΠL where the policies are allowed to depend on the time step. But I assume there's no point unless the reward function also depends on the time step. (I don't know anything about MDPs.)

Is the idea here that the soil-AU is slang for "AU of goal 'plant stuff here'"?

One thing I noticed is that the formal policies don't allow for all possible "strategies."

yeah, this is because those are “nonstationary” policies - you change your mind about what to do at a given state. A classic result in MDP theory is that you never need these policies to find an optimal policy.

Am I correct that a deterministic transition function is

I find the existing MDP isomorphisms/equivalences to be pretty lacking.

I have a paper on equivalences (and counterfactual equivalences, which is stronger) for POMDPs: https://arxiv.org/abs/1801.03737