Violent revolutions may be good for taking down a government but they have a weak record of establish democracy. Only young men of combat age can go out into the jungle to wage a guerrilla war. But everyone can participate in a nonviolent resistance movement. This is really important because the ultimate objective isn't to take down the government. It is to establish a functioning democracy.

Picture the day after the revolution. The dictator has fallen. The streets are filled with protesters. What happens next?

The most powerful factions take over.

If you want to replace a dictatorship with democracy then you need to make sure that the second-most powerful faction (after the dictator) is pro-democracy. This kind of grassroots movement takes year to build. It starts small.

Oppressive regimes give power to a small minority over the broad majority. Revolution is a coordination problem. If the great majority could easily coordinate then every evil regime would have fallen by now. If you can coordinate the great masses then everything else is trivial.

Coordinating the great masses is easier said than done. Most people do not ask for much. They just want to work a decent job for decent pay under decent living conditions. People require three preconditions to rebel.

Resistance is always possible. If someone holds a gun to your head and orders you to dig a ditch then you can refuse. You'll be dead. But you will have died free. We want to negotiate a lower price. The best way to get a good price is to negotiate en masse. Authoritarian regimes are premised on keeping their opposition divided.

Well if I were You-Know-Who, I’d want you to feel cut off from everyone else. Because if it’s just you alone you’re not as much of a threat.

―Luna Lovegood in Harry Potter and the Order of the Phoenix

The early seeds of a revolution are mostly signaling. Our goal is to get people to communicate to each other that they're not alone. You might wonder "How do I signal that I oppose the regime when the regime shoots dissenters?"

Oppressive regimes don't just shoot everyone who puts the slightest toe out of line. There are gray areas. No matter where you are, there is always something you could get away with. Revolutionaries have carried oranges around, driven their cars at half speed and taken their televisions for a walk.

Small symbolic acts of resistance put the authorities in a bind. If they crack down on people carrying oranges around then they will lose legitimacy. "Cut off one head, two more shall take its place." If they do nothing then resistance will seem safe. As small acts of resistances is tacitly condoned you can resist slightly more overtly. Revolutionaries can't control what the authorities choose to do. But they can create win-win situations for themselves by protesting in a way that makes crackdowns appear unreasonable. 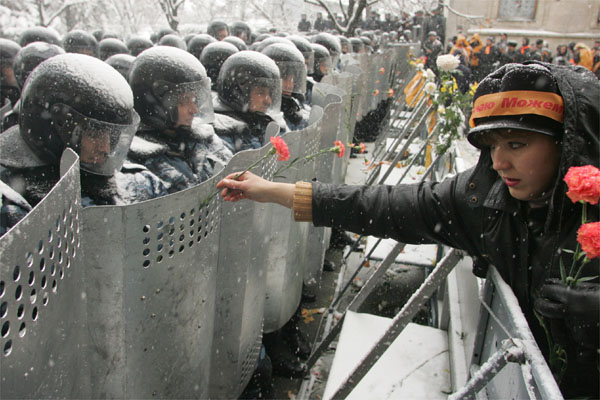 This is why it's so incredibly important to enforce nonviolence on the side of the revolutionaries. When police tear gas peaceful protesters it is crystal clear to the entire world who the good guys are. Is even a small number of people among the protesters start throwing Molotov cocktails then things get really confusing really fast.

If you have been doing this right then you should have a grassroots organization ready to take over at exactly the same time the tables turn and the regime loses power. The problem is that alliances tend to fragment when their common enemy disappears. You need something bigger to rally behind like "democracy" and it has to be well-established long before the regime topples.

Speak in the positive. What do you want? What is a world that everybody can rally behind even after the big baddie has been deposed?

Blueprint for Revolution is an incredible book. I cannot do it justice here. Go read it. It's useful not only for activists but also entrepreneurs, marketers and community organizers.

There seem to be some steps missing in the middle here. The current outline seems to be:

I'm curious whether there are any cases where those three happened without foreign help.

If you are in a country like Serbia, maybe it's reasonable to expect that in case you create a power vacccum NATO will make sure that those three happen?

In Blueprint for Revolution, the Serbian author complains about NATO intervention in Serbia because violent outside intervention rallied people toward the local strongman (and because American bombers almost killed his noncombatant mother).

There are two ways to see it. One is to say that the NATO made a strategic mistake. They should have funded resistance organizations but they end up bombing Serbia which was bad for moral.

The other would be to say that NATO intervention is generally a problem. If he argues that, then how does he think those three can work in practice? Does he say anything about that?

Srđa Popović's book is built around the idea that peoples can and should decide their own fate. He doesn't have much to say about NATO except that he didn't like it when NATO bombing his country because it killed people and increased support for the regime.

To concur with this article, the french Resistance started with kids and teenagers graffitying and parading during the national holiday in cities remote from centers of power. Then some adults started printing alternate news in the form of pamphlets. Only after a period came sabotaging, then armed resistance.

This is why it's so incredibly important to enforce nonviolence on the side of the revolutionaries.

There's a hidden assumption here. It's important to appear nonviolent. Enforcing nonviolence is only useful insofar as it contributes towards appearing nonviolent. Information sources that are government-owned/sympathetic will paint you violent no matter what. Sources that are revolution-owned/sympathetic will paint you nonviolent no matter what. In an increasingly polarized world, what actually happens matters less and less to reputation.

An important aspect about carrying around the orange is that the policemen who's ordered to go after the person who carries the orange has to justify his actions to themselves even if it doesn't make the news. On the other hand the police man that's the target of molotov cocktails has a clear idea that they go after people who deserve to be fought.

To concur with this article, the french Resistance started with kids and teenagers graffitying and parading during the national holiday in cities remote from centers of power.