The main idea of quantum (the name "big world immortality" may be better) is that if I die, I will continue to exist in another branch of the world, where I will not die in the same situation.

This map is not intended to cover all known topics about QI, so I need to clarify my position.

I think that QI may work, but I put it as Plan D for achieving immortality, after life extension(A), cryonics(B) and digital immortality(C). All plans are here.

I also think that it may be proved experimentally, namely that if I turn 120 years or will be only survivor in plane crash I will assign higher probability to it. (But you should not try to prove it before as you will get this information for free in next 100 years.)

There is also nothing quantum in quantum immortality, because it may work in very large non-quantum world, if it is large enough to have my copies. It was also discussed here: Shock level 5: Big worlds and modal realism.

There is nothing good in it also, because most of my survived branches will be very old and ill. But we could use QI to work for us, if we combine it with cryonics. Just sign up for it or have an idea to sign up, and most likely you will find your self in survived branch where you will be resurrected after cryostasis. (The same is true for digital immortality - record more about your self and future FAI will resurrect you, and QI rises chances of it.)

I do not buy "measure" objection. It said that one should care only about his "measure of existence", that is the number of all branches there he exists, and if this number diminish, he is almost dead. But if we take an example of a book, it still exist until at least one copy of it exist. We also can't measure the measure, because it is not clear how to count branches in infinite universe.

I also don't buy ethical objection that QI may lead unstable person to suicide and so we should claim that QI is false. I think that rational understanding of QI is that it or not work, or will result in severe injuries. The idea of soul existence may result in much stronger temptation to suicide as it at least promise another better world, but I never heard that it was hidden because it may result in suicide. Religions try to stop suicide (which is logical in their premises) by adding additional rule against it. So, QI itself is not promoting suicide and personal instability may be the main course of suicidal ideation.

I also think that it is nothing extraordinary in QI idea, and it adds up to normality (in immediate surroundings). We all already witness to examples of similar ideas. That is the anthropic principle and the fact that we found ourselves on habitable planet while most planets are dead. And the fact that I was born, but not my billions potential siblings. Survivalship bias could explain finding one self in very improbable conditions and QI is the same idea projected in the future.

Both variables are unknown to us currently. Simply speaking, QI will not work if (actually existing) world is small or if personal identity is very fragile.

My apriori position is that quantum multiverse and very big universe are both true, and that information is all you need for personal identity. This position is most scientific one, as it correlate with current common knowledge about Universe and mind. If I could bet on theories, I would bet on it 50 per cent, and 50 per cent on all other combination of theories.

Even in this case QI may not work. It may work technically, but become unmeasurable, if my mind will suffer so much damage that it will be unable to understand that it works. In this case it will be completely useless, the same way as survival of atoms from which my body is composed is meaningless. But this maybe objected, if we say that only my copies that remember that me is me should be counted (and such copies will surely exist).

From practical point of view QI may help if everything failed, but we can't count on it as it completely unpredictable. QI should be considered only in context of other world-changing ideas, that is simulation argument, doomsday argument, future strong AI. 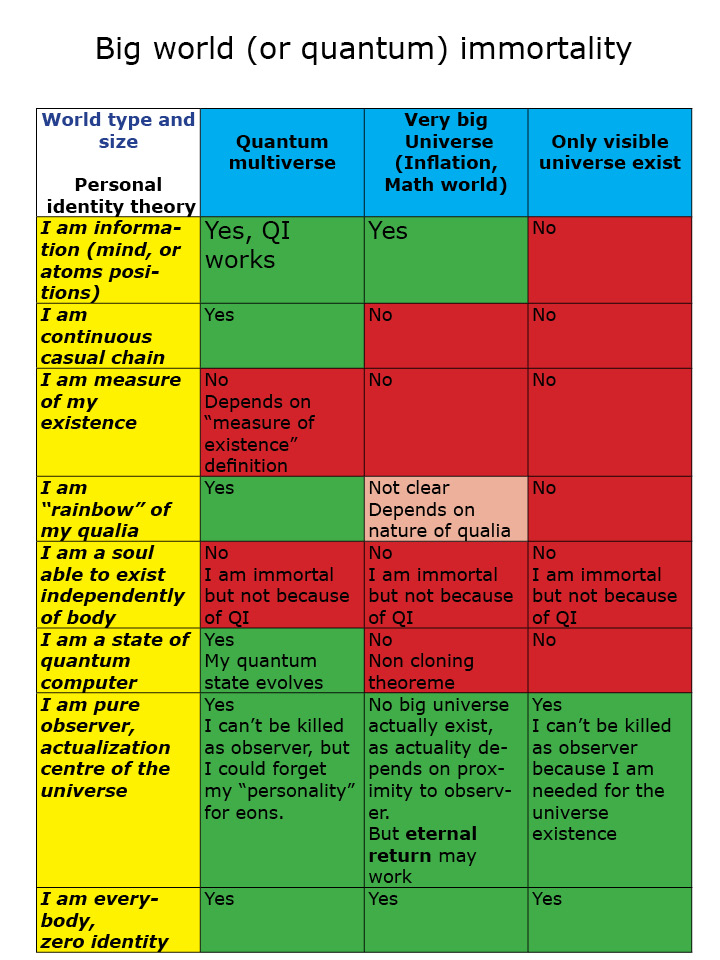