Edit 2020/12/13: I think a lot of people have misunderstood my intent with this post. I talk about the 2020 election because it seemed like the perfect example to illustrate the point, but it was still only an example. The goal of this post is to establish a philosophically sound ground truth for probabilities.

It seems to me that:

In this post, I work out a framework in which there is a ground truth for probabilities, which justifies 1-3.

Suppose we play this game, writing down each coin flip as it occurs, and put the progression into a chart:

Since we know exactly how this game works, it's possible to compute the current probability of winning at every point during the game.[1] Here is a chart of these probabilities, given the flips from the chart above:

I call a graph like this an information chart. It tells us how the probability of a prediction changes as a function of {amount of input information}.

However, while the blue curve has perfect calibration, we can also model imperfect calibration in this framework. To do this, I've computed the probability of winning, provided that we underestimate (red) or overestimate (green) the number of flips that are still missing, relative to those we know.[3] The results look like this:

Looking at these three information charts together, we can see the following:

In summary, the following concepts fall out of this framework:

(The attentive reader may also notice that "50% predictions can be meaningful" follows as an easy corollary from the above.)

My primary claim in this post is that information charts are the proper way to look at predictions – not just in cases where we know all of the factors, but always. It may be difficult or impossible to know what the information chart looks like in practice, but it exists and should be considered the philosophical ground truth. (Information isn't a one-dimensional spectrum, but I don't think that matters all that much; more on that later.[5]) Doing so seems to resolve most philosophical problems.

I don't think it is in principle possible to weigh calibration and information against each other. Good calibration removes bias; more information moves predictions further away from the baseline. Depending on the use case, you may rather have a bunch of bold predictions that are slightly miscalibrated or a bunch of cautious predictions with perfect calibration. However, it does seem safe to say that:

Here is an example of where I think the framework helps resolve philosophical questions.

On the eve of the 2020 election, the model of 538 coded by Nate Silver has predicted an 89% probability of Biden winning a majority in the Electoral College (with 10% for Trump and 1% for a tie). At the same time, a weighted average of prediction markets had Biden at around 63% for becoming the next president.[6] At this point, we know that

The first convenient assumption we will make here is that both predictions had perfect calibration. (This is arguably almost true.) Given that, the only remaining question is which prediction was made with more information.

To get my point across, it will be convenient to assume that we know how the information chart for this prediction looks like: 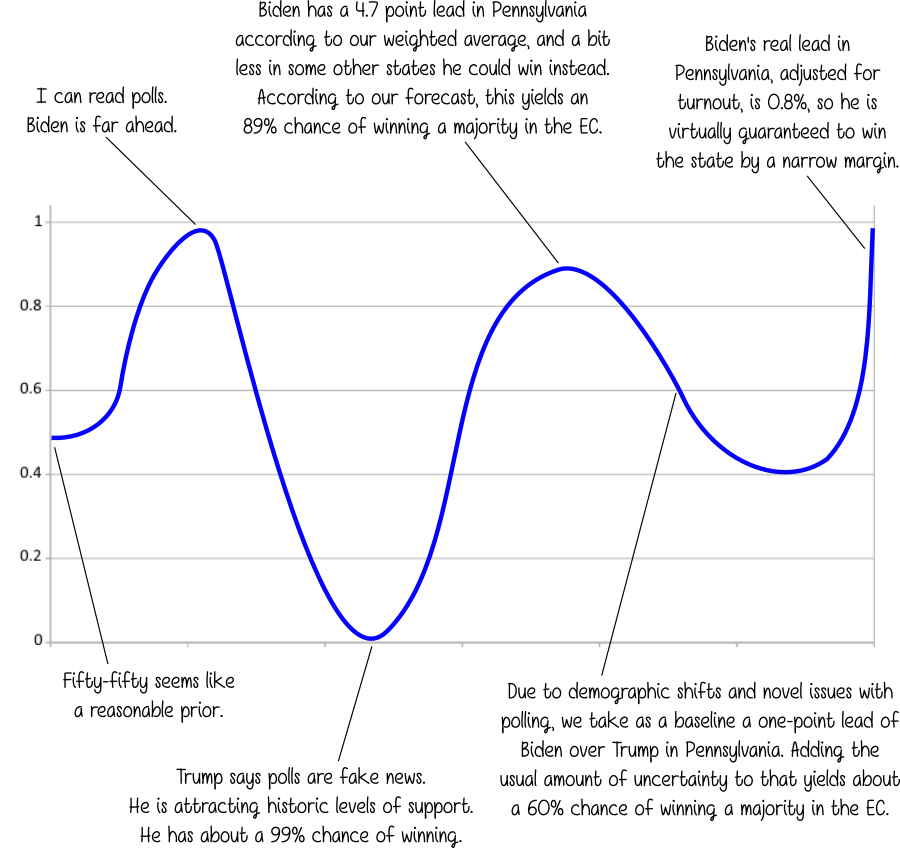 If you accept this, then there are two stories we can tell about 538 vs. Betting markets.[8] 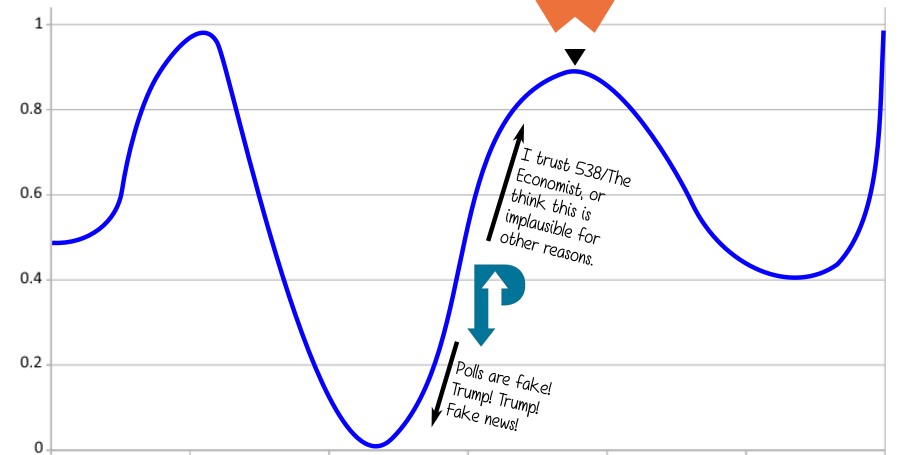 In the first story, no-one had foreseen the real reasons why polls were off in favor of Trump; they may as well have been off in favor of Biden. Consequently, no-one had good reasons to assign Biden a <89% chance of winning, and the people who did so anyway would have rejected their reasons if they had better information/were more rational.

If the above is true, it means everyone who bet on Biden, as some on LessWrong have advised, has taken a good deal. However, there is also a different story. 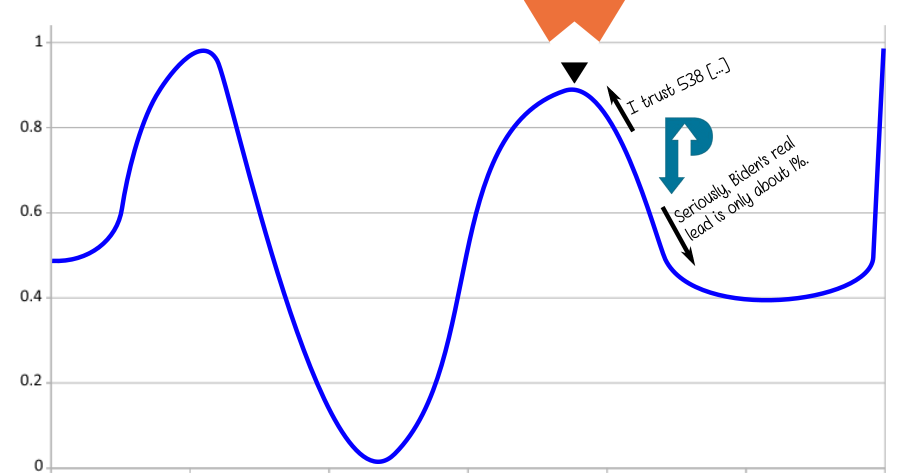 In the second story, the markets knew something that modelers didn't: a 2016-style polling error in the same direction was to be expected. They didn't know how large it would be exactly, but they knew it was large enough for 63% to be a better guess than 89% (and perhaps the implied odds by smart gamblers were even lower, and the price only came out 63% because people who trusted 538 bought overpriced Biden shares). The outcome we did get (a ~0.7% win for Biden) was among the most likely outcomes as projected by the market.

Alas, betting on Biden was a transaction which, from the perspective of someone knowing what the market knew, had negative expected returns.

In reality, there was probably at least a bit of both worlds going on, and the information chart may not be accurate in the first place. Given that, either of the two scenarios above may or may not describe the primary mechanism by which pro-Trump money entered the markets. However, even if you reject them both, the only specific claim I'm making here is that the election could have been such that the probability changed non-monotonically with the amount of input information, i.e.:

If true, this yields a non-injective function, meaning that there are specific probabilities that have been implied by several positions on the information chart, such as the 63% for Biden. Because of this, we cannot infer the quality of the prediction solely based on the stated probability.

And yes: real information is not one-dimensional. However, the principles still work in a 1000000-dimensional space:

Thus, to sum up this post, these are the claims I strongly believe to be true:

And, perhaps most controversially:

I've basically said what I wanted to say at this point – the fourth chapter is there to overexplain/make more arguments.

This also means that there are different ways to assign probabilities to a set of statements that are all perfectly calibrated. For example, consider the following eight charts that come from eight runs of the 100-coins game: 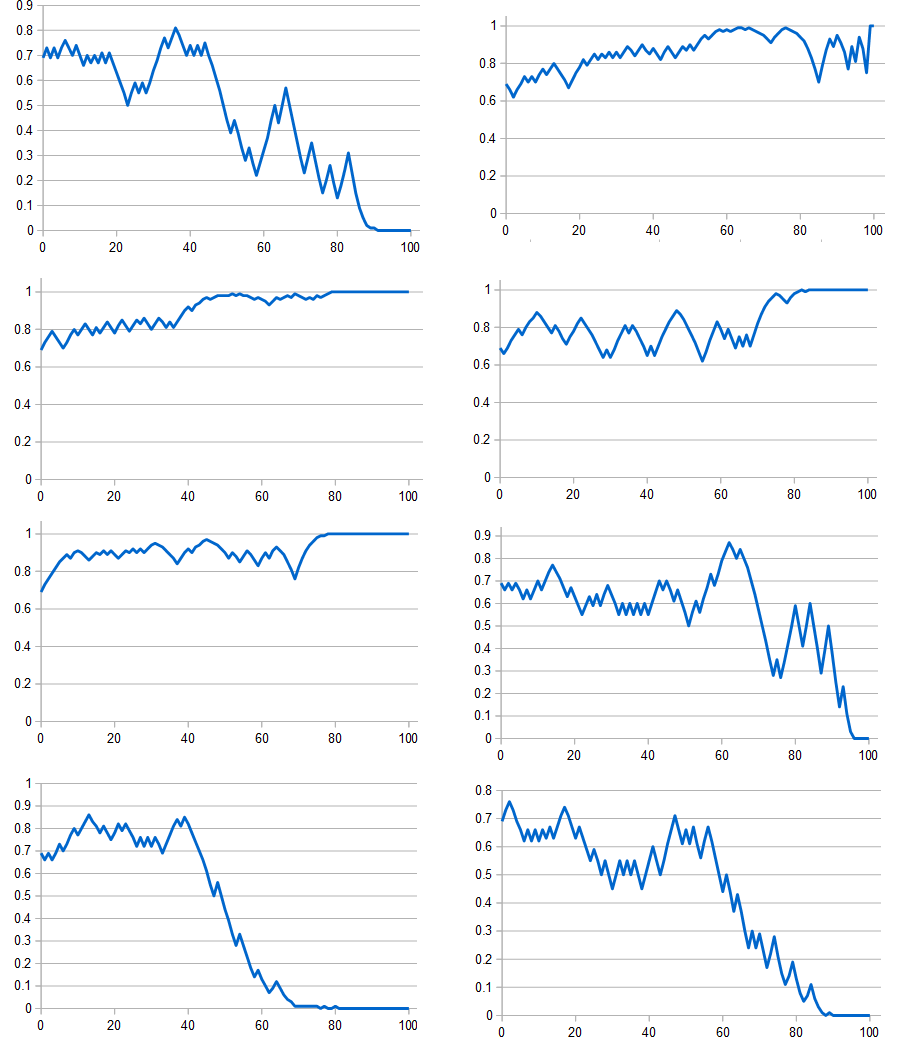 There are many ways of obtaining a set of perfectly calibrated predictions from these graphs. The easiest is to throw away all information and go with the prior every time (which is the starting point on every graph). This yields eight predictions that all claim a 0.69135 chance of winning.[10] Alternatively, we can cut off each chart after the halfway point: 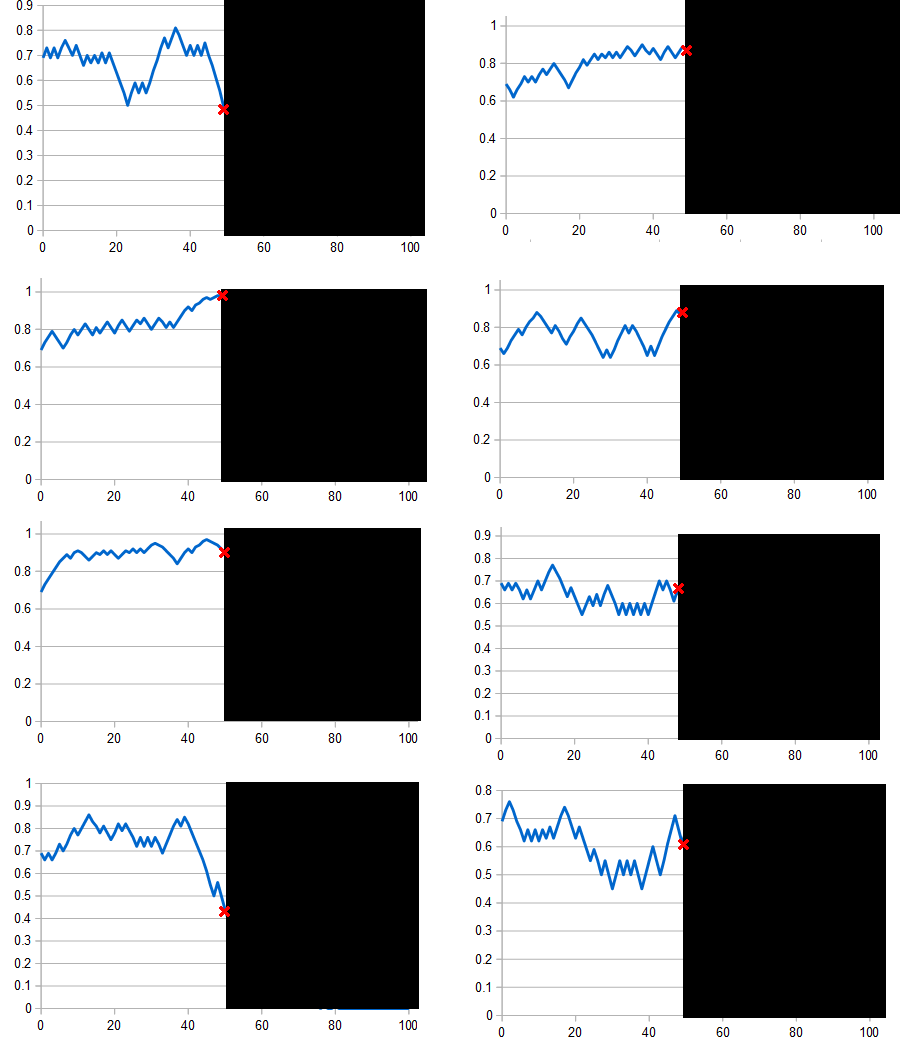 You probably know that there are scoring functions for predictions. Our framework suggests that the quality of predictions is a function of {amount of information} and {calibration}, which begs the question of which of the two things scoring functions measure. (We would hope that they measure both.) What we can show is that, for logarithmic scoring,

The second of these properties implies that, the later we cut off our blue curves, the better a score the resulting set of predictions will obtain – in expectation.

Since the yi are either 1 or 0, the formula amounts to summing up [the logarithms of the probability mass assigned to the true outcome] across all our predictions. E.g., if I make five 80% predictions and four of them come true, I sum up 4log(0.8)+log(0.2).

Note that these terms are all negative, so the highest possible score is the one with the smallest absolute value. Note also that log(x) converges to −∞ as x goes to 0: this corresponds to the fact that, if you increase your confidence in a prediction but are wrong, your punishment grows indefinitely. Predicting 0% for something that comes true yields a score of −∞.

I think the argument about calibration is the less interesting part (I don't imagine anyone is surprised that logarithmic scoring rewards good calibration), so I've relegated it into a footnote.[11]

Let's look at information. Under the assumption of perfect calibration, we know that any prediction-we-have-assigned-probability-p will, indeed, come true with probability p. Thus, the expected score for such a prediction[12] is

This shows us that, for any one prediction, a more confident verdict is preferable, provided calibration is perfect. That alone does not answer our question. If we increase our amount of information – if we take points further to the right on our blue curves – some predictions will have increased probability, others will have decreased probability. You can verify this property by looking at some of the eight charts I've pictured above. What we can say is that

Thus, the question is whether moving away from p in both directions, such that the total probability mass remains constant, yields a higher score. In other words, we want that

Fortunately, this inequality is immediate from the fact that L is strictly convex (which can be seen from the graph pictured above).[13] Similar things are true for the Brier score.[14]

I agree, of course, that a bad prediction can perform better than a good prediction by luck. That means if you were already sufficiently sure your prediction was good, you can continue to believe it was good after it performs badly. But your belief that the prediction was good then comes from your model of the sources of the competing predictions prior to observing the result (e.g. "PredictIt probably only predicted a higher Trump probability because Trump Trump Trump") instead of from the result itself. The result itself still reflects badly on your prediction. Your prediction may not have been worse, but it performed worse, and that is (perhaps insufficient) Bayesian evidence that it actually was worse. If Nate Silver is claiming something like "sure, our prediction of voter % performed badly compared to PredictIt's implicit prediction of voter %, but we already strongly believed it was good, and therefore still believe it was good, though with less confidence", then I'm fine with that. But that wasn't my impression.

I think I agree with all of that.

This is all well and good, but I feel you've just rephrased the problem rather than resolving it. Specifically I think you're saying the better prediction is the one which contains more information. But how can we tell (in your framework) which model contained more information.

If I had to make my complaint more concrete, it would be to ask you to resolve which of "Story 1" and "Story 2" is more accurate? You seem to claim that we can tell which is better, but you don't seem to actually do so. (At least based on my reading).

I think there are some arguments but I deliberately didn't mention any to keep the post non-political. My claim in the post is only that an answer exists (and that you can't get it from just the outcome), not that it's easy to find. I.e., I was only trying to answer the philosophical question, not the practical question.

In which case, isn't there a much shorter argument. "Given an uncertain event there is some probability that event occurs and that probability depends on the information you have about the event". That doesn't seem very interesting to me?

To make this framework even less helpful (in the instance of markets) - we can't know what information they contain. (We can perhaps know a little more in the instance of the presidential markets because we can look at the margin and state markets - BUT they were inconsistent with the main market and also don't tell you what information they were using).