How Risky Is Trick-or-Treating?

I've seen this chart going around: 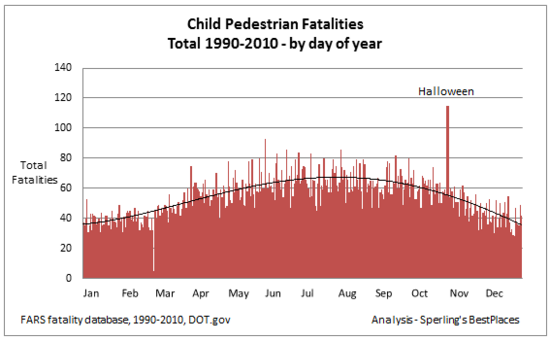 Sperling and Smith created it from NHTSA FARS data, and there have been lots of news stories about it or the underlying data. Some people have a "lets make costumes brighter" angle, some see this as ammunition in the fight against car-centric culture (which I support), some people want to move Halloween earlier in the day. But I think everyone is missing the point: Halloween is actually one of the safest days to be out walking as a kid.

Let's look at the data. I started by replicating the chart to verify I was doing it correctly (code): 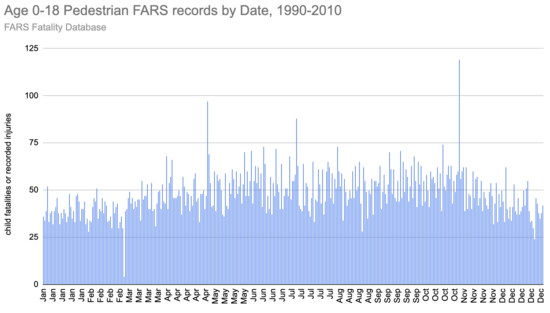 The dip on February 29th is mostly just that this day only occurs once every four years, so it has about a quarter the deaths you'd expect. But what about the spike on 4/30? On April 30th 1992 someone drove their car into a large group of 3rd graders on a field trip, and one of them died. It turns out the FARS records can include cases where someone else died in the same accident. Filtering to just the records representing deaths I get: 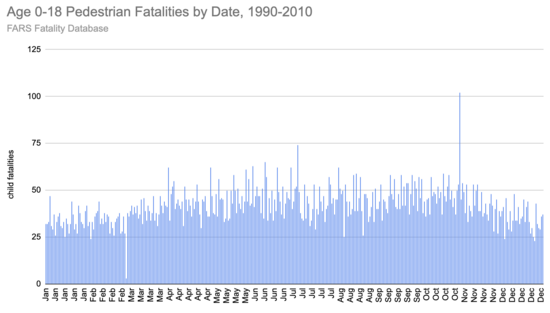 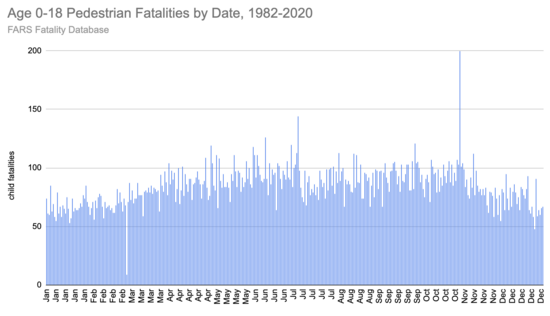 We can also break down by age, since "child" can mean a range of things and most people are likely thinking mostly about younger children: 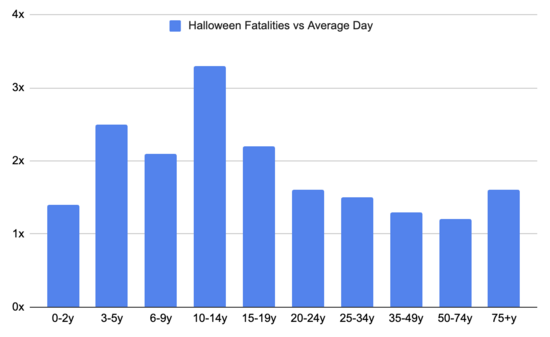 All this is to confirm the original chart: more children do die on Halloween than on a typical day. But I still don't think that's a reason to keep your kids home on Halloween, even when you set aside the consideration that Halloween is an especially fun time to be a child pedestrian.

The issue is, there are a lot more kids out on Halloween than the typical day. If you learned that more people died in car crashes in the US (42k/y) than in Paraguay (1.6k/y) you wouldn't conclude that Paraguay's roads are safer: the US has 50x more people than Paraguay! We would ideally scale the initial chart by the number of children out walking on any given day, but I don't think anyone has numbers on this. Very roughly, though, maybe it's something like 5x as many people (kids, parents, grandparents) out on foot on Halloween than the typical day? 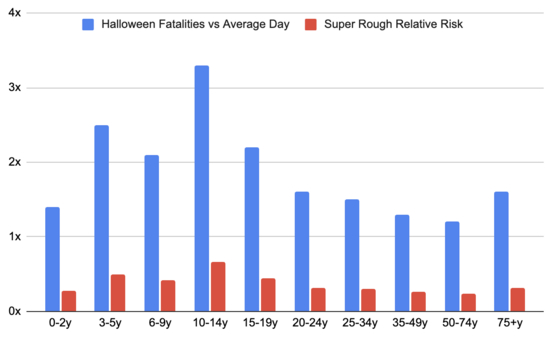 Every pedestrian is rolling some dice. The dice are pretty favorable: of the ~70M people under age 18 in the US only 320 died in 2020 by being hit by a car. But you still might want to avoid days where the dice were less favorable than usual. Looking at the original chart you might conclude that Halloween was one of those days, but if there are a lot more kids walking around on Halloween it's actually one of the safer days.

(There were fewer trick-or-treaters in the past, so the denominator is lower than 33 million per year, but I think that's overwhelmed by road safety improvements making modern trick-or-treating safer---total pedestrian fatalities are currently similar to their long-term average despite our growing population, and child fatalities in particular seem even lower.)

While I appreciate the analysis, I also recently saw this article circulating: https://jamanetwork.com/journals/jamapediatrics/article-abstract/2711459

It compares just 6pm-midnight on Halloween versus the corresponding time one week early and one week later. They estimate a 10x increase in deaths in age 4-8 children - see Figure 1. This doesn't look like subgroup fishing since the 9-12 group is also quite large (6x increase). By your 5x correction factor, Halloween would still be more dangerous than other days for kids.

I still think it could be true that Halloween is less dangerous since this hasn't measured pedestrian activity and trick-or-treat really might be a greater than 10x increase in 4-8 year olds out on the street. But this definitely makes it look less good to me than your presentation.

That analysis is using the same dataset I'm using, but restricting to 6pm-midnight. This has even more of the denominator problem I'm talking about: almost no kids are out walking 6pm-midnight on a typical day, since that's dinner and bedtime. So 5x is likely much too small a factor to account for how many more kids are out.

Your graph shows an ~40% risk compared to the normal day in that age group. Using their risk ratio you would need about 25x times the child pedestrian activity to achieve that risk reduction. That could be the case, but I'm not certain. I'm not even that confident that you'd get the >10x needed to ensure a decrease in risk. Kids tend to go to hot spots for trick-or-treating, so the really busy streets that get >25x and spring to mind easily might be hiding the (relatively) depleted streets elsewhere that account for a larger fraction of typical walking. Hence I think your presentation is optimistic: it's right to push back on the raw numbers but I don't think it's clear that Halloween is substantially safer than other nights per pedestrian-hour as you claim.

I also read the denominator problem differently. I took your argument to claim that 5x number to be a lower bound for the "trick-or-treating streets compared to the same streets on a typical night" and for that, it's definitely true. But then you had to gloss over the fact that we're comparing entire days (and non-trick-or-treating streets) and it's much less clear that 5x is true for all-of-Halloween compared to all-of-another-day. Therefore, their analysis justified using your 5x number while I think your analysis was stretching the truth.

I would believe 25x, or even 50x for fall evenings, and I think 10x+ is overwhelmingly likely: it's just very few children that are out during those hours normally.

While this doesn't change the basic conclusion from the data, does the data provide any data related to:

1: while the data is supposed to include all traffic fatalities, it includes few injuries, and in recent data it only includes fatalities

I'm not that familiar with the data, but how would I link that record to a child death?

Within years, the combo of ST_CASE and STATE uniquely identifies accidents, so an intermediate step is tracking the accident ID. Then you could classify accidents as involving a child as those where at least one of the decedents is under a certain age, then use that PER_TYP variable to look at the ages of the driver(s) for those accidents. Cool analysis, btw--I've worked a lot with the FARS and happy to help :)

I agree with the post, but I will point out that you really do need to emphasize the utility per micromort here. If you keep your utility constant, it is the total risk that matters. Just like if you were going to go on a long car ride tomorrow (on safer-than-usual roads, but not enough to outweigh the total driving) and someone points out you're much more likely to die than usual - sure, you can point out 'ah yes, but the chance I die per-mile is lower than usual!' but that's not the right reference point if your utility isn't a function of the driving-amount.

All that said, the total number of deaths is only ~double on Halloween? That feels so insane, roads must be SO much safer than usual.

Not sure I understand what this paragraph is getting at?

roads must be SO much safer than usual.

But it's also dark and chaotic.

Yeah, the most promising by-day interventions I've heard proposed is day-specific regulation of driving, such as lower speed limits, closing of residential roads to thru traffic, etc.

The question is what should be the denominator of the risk?
For societal aggregate worries: Day? Sure.
For personal risk: Day? Nope. Person-day? Yes!

Even for societal aggregate worries it's only worth using days as the denominator if the potential interventions you're considering scale by days and not person-days. For example "stay-home on Halloween" or "move Halloween earlier" has costs proportional to the latter.

What about (e.g.) risks from kids ingesting candy sourced from multiple unknown people (any one of whom could poison a whole lotta kids with decent chances of not getting caught)? Maybe tell kids to only accept cash?

risks from kids ingesting candy sourced from multiple unknown people (any one of whom could poison a whole lotta kids with decent chances of not getting caught)?

This is something people have worried about a bunch, but it doesn't actually happen: https://en.wikipedia.org/wiki/Poisoned_candy_myths