I'd like to quote tact filters by Jeff Bigler:

All people have a "tact filter", which applies tact in one direction to everything that passes through it. Most "normal people" have the tact filter positioned to apply tact in the outgoing direction. Thus whatever normal people say gets the appropriate amount of tact applied to it before they say it. This is because when they were growing up, their parents continually drilled into their heads statements like, "If you can't say something nice, don't say anything at all!"

"Nerds," on the other hand, have their tact filter positioned to apply tact in the incoming direction. Thus, whatever anyone says to them gets the appropriate amount of tact added when they hear it. This is because when nerds were growing up, they continually got picked on, and their parents continually drilled into their heads statements like, "They're just saying those mean things because they're jealous. They don't really mean it."

So, nerds need to understand that normal people have to apply tact to everything they say; they become really uncomfortable if they can't do this. Normal people need to understand that despite the fact that nerds are usually tactless, things they say are almost never meant personally and shouldn't be taken that way. Both types of people need to be extra patient when dealing with someone whose tact filter is backwards relative to their own.

Later edit for clarification: I don't like the Nerd|Normal dichotomy because those words have various histories and baggage associated with them, so I renamed them (Stater, listener, Launch filter, Landing filter).  "Normal" is pretty unhelpful when trying to convey a clear decision about what's good or bad.

Okay; so Tact filters.  But what should we really do?  What's better?  Jeff's Nerd or Normal?  And more importantly - In future ambiguous cases - what should we do?

Moving parts to this system

There are a few moving parts to tact, I am going to lay them out: 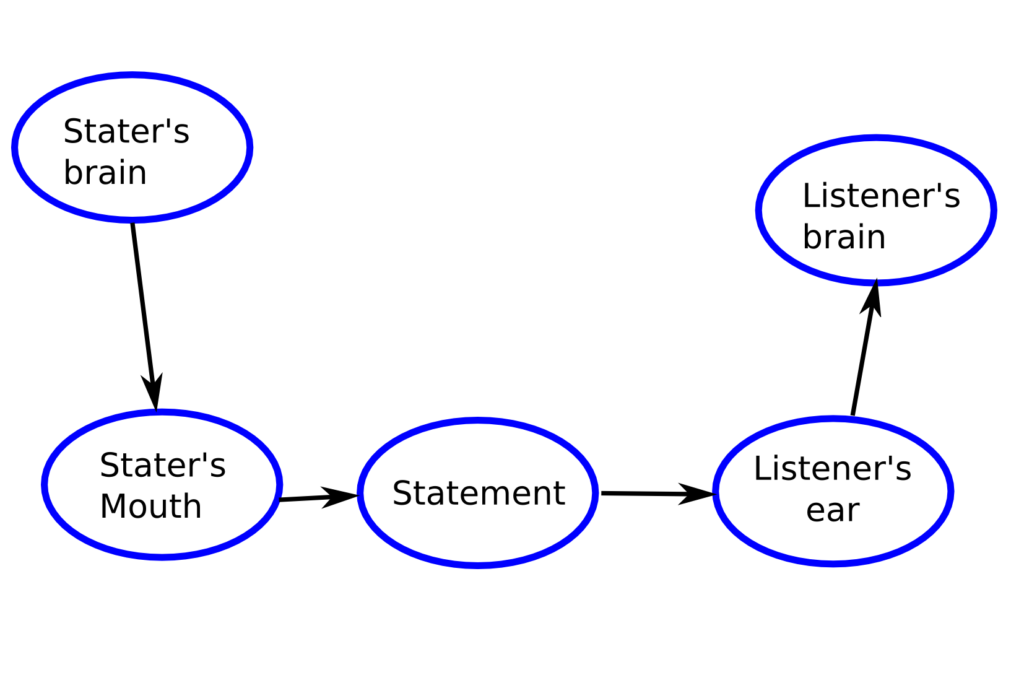 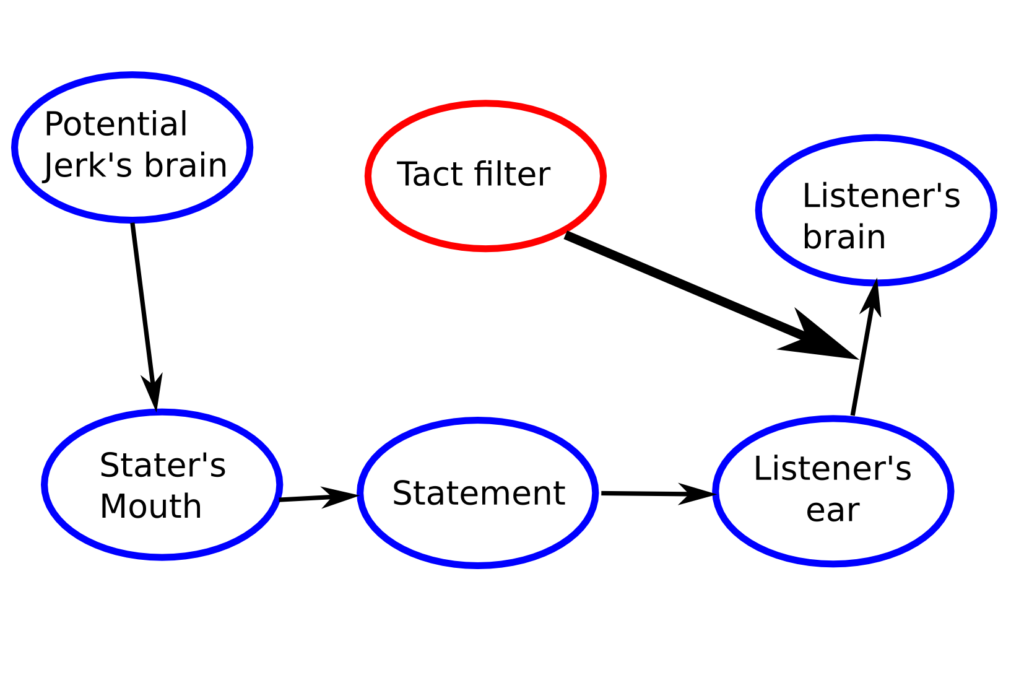 But this isn't great because it labels anyone you are talking to as "potential jerks". 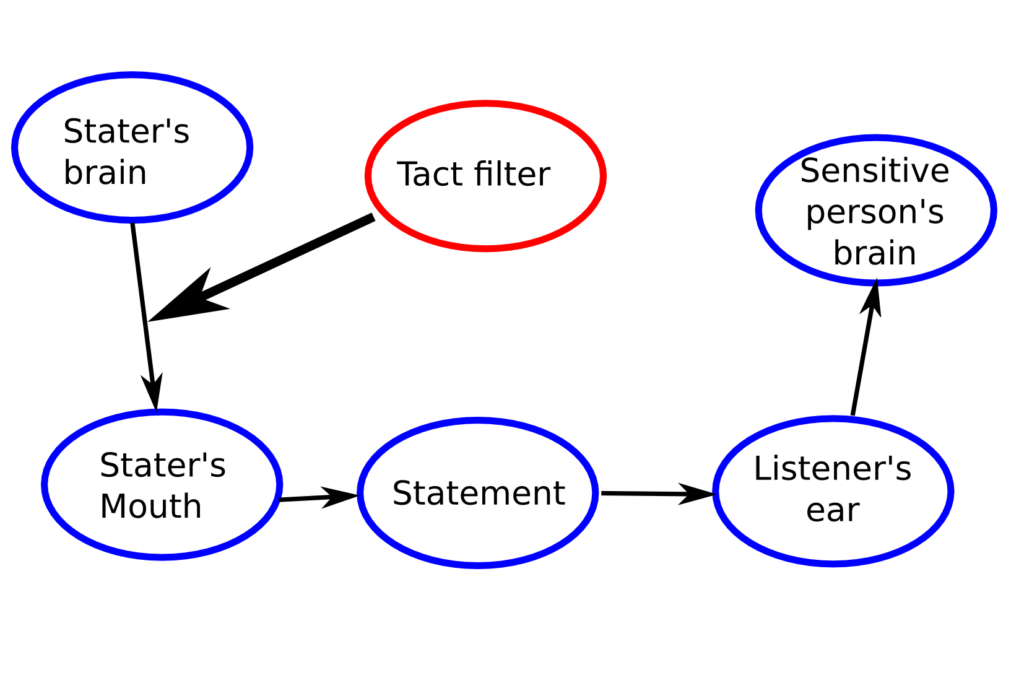 The responsibility to be tactful prepares the statement for a sensitive person.  Which isn't great either.  Tact takes time, takes energy and effort, what if no one ever needed to be tactful?  Everything would also be fast.

So this is real life now.  You don't really know if the other person is tactful or sensitive or a jerk or just normal...  The best possible plan for unknowns: 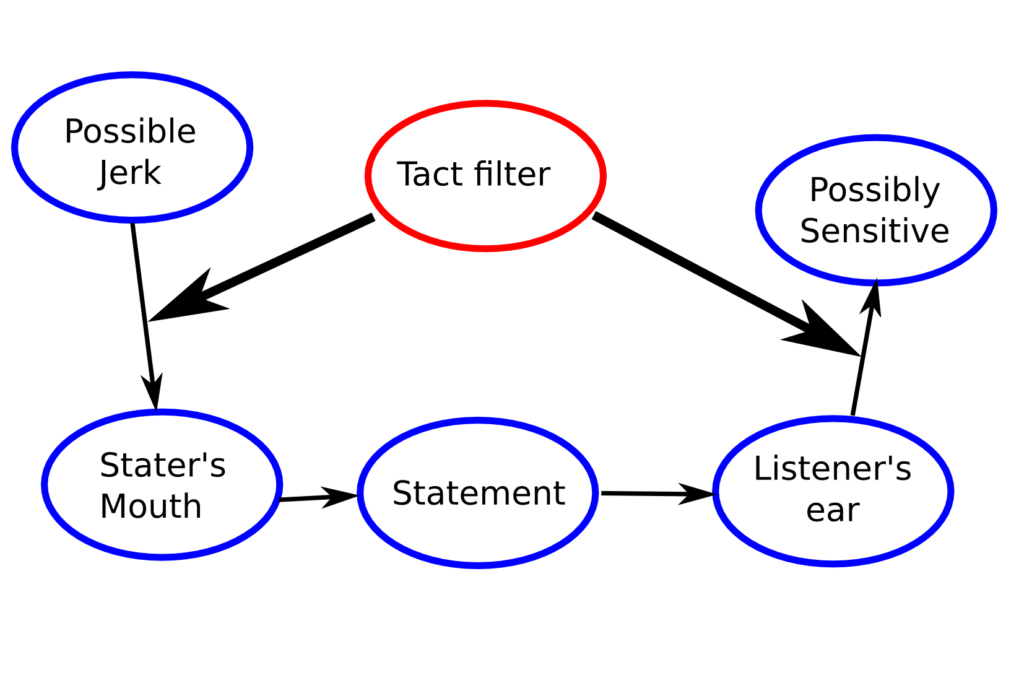 It's not rocket science.  Said again:

A: yes it is!  No you don't!  You live on earth.  In the real world, where you sometimes encounter people living in the other land.  Which is a fact.  You can choose to piss them off when you meet them but you should know that's a choice and up to you.  And now that you know this; the responsibility is on you to make the better choice.

Even this model leaves out all the further compounding factors.

I don't know.  Err on the side of caution.

Meta: this took 2 hours to think about, write and draw out what I meant.