I didn't get requests for any specific subject from the last post, so I'm going in the direction that I find interesting and I hope the community will find interesting as well. Let's do Naive Bayes! You can download the code and follow along.

Disclaimer: I was learning Naive Bayes as I was writing this post, so please double check the math. I'm not using 3rd party libraries so I can fully understand how it all works. In fact, I'll start by describing a thing that tripped me up for a bit.

What not to do

My original understanding was: Naive Bayes basically allows us to update on various features without concerning ourselves with how all of them interact with each other; we're just assuming they are independent. So we can just apply it iteratively like so:

You can see how that fails if we keep updating P(H) upwards over and over again, until it goes above 1. I did math the hard way to figure out where I went wrong. If we have two features:

Looks like what I wrote above. Where's the mistake? Well, Naive Bayes actually says that all features are independent, conditional on H. So P(f1|H,f2) = P(f1|H) because we're conditioning on H, but P(f1|f2) != P(f1) because there's no H in the condition.

One intuitive example of this is a spam filter. Let's say all spam emails (H = email is spam) have random words. So P(word1|word2,H)=P(word1|H), i.e. if we know email is spam, then the presence of any given word doesn't tell us anything about the probably of seeing another word. Whereas, P(word1|word2) != P(word1) since there are a lot of non-spam emails, where word appearances are very much correlated. (H/t to Satvik for this clarification.)

This is actually good news! Assuming P(f1|f2) = P(f1) for all features would be a pretty big assumption. But P(f1|H,f2) = P(f1|H), while often not exactly true, is a bit less of stretch and, in practice, works pretty well. (This is called conditional independence.)

Also, in practice, you actually don't have to compute the denominator anyway. What you want is the relative weight you should assign to all the hypotheses under consideration. And as long as they are mutually exclusive and collectively exhaustive, you can just normalize your probabilities at the end. So we end up with:

Which is close to what we had originally, but less wrong.... Okay, now that we know what not to do, let's get on with the good stuff. 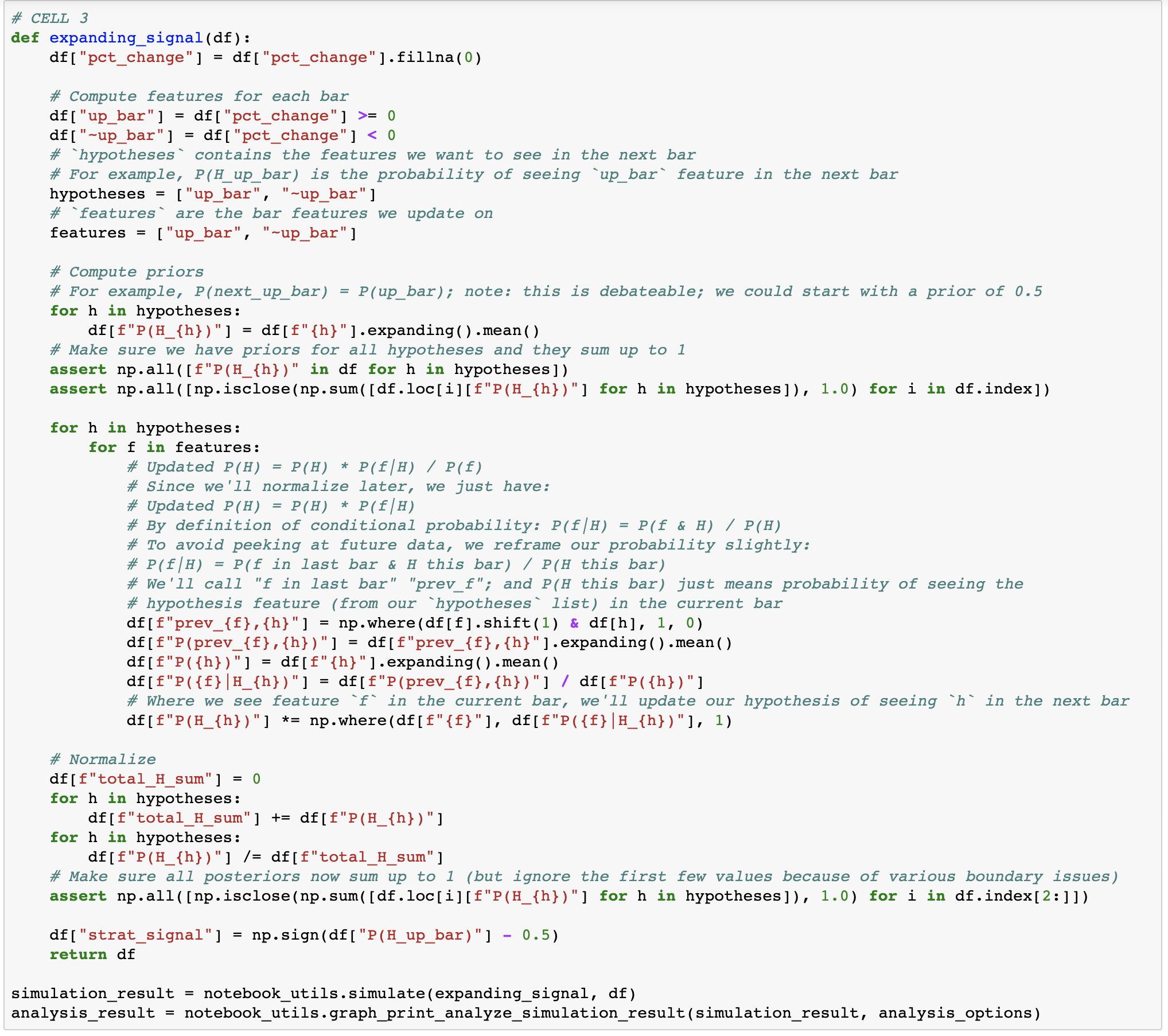 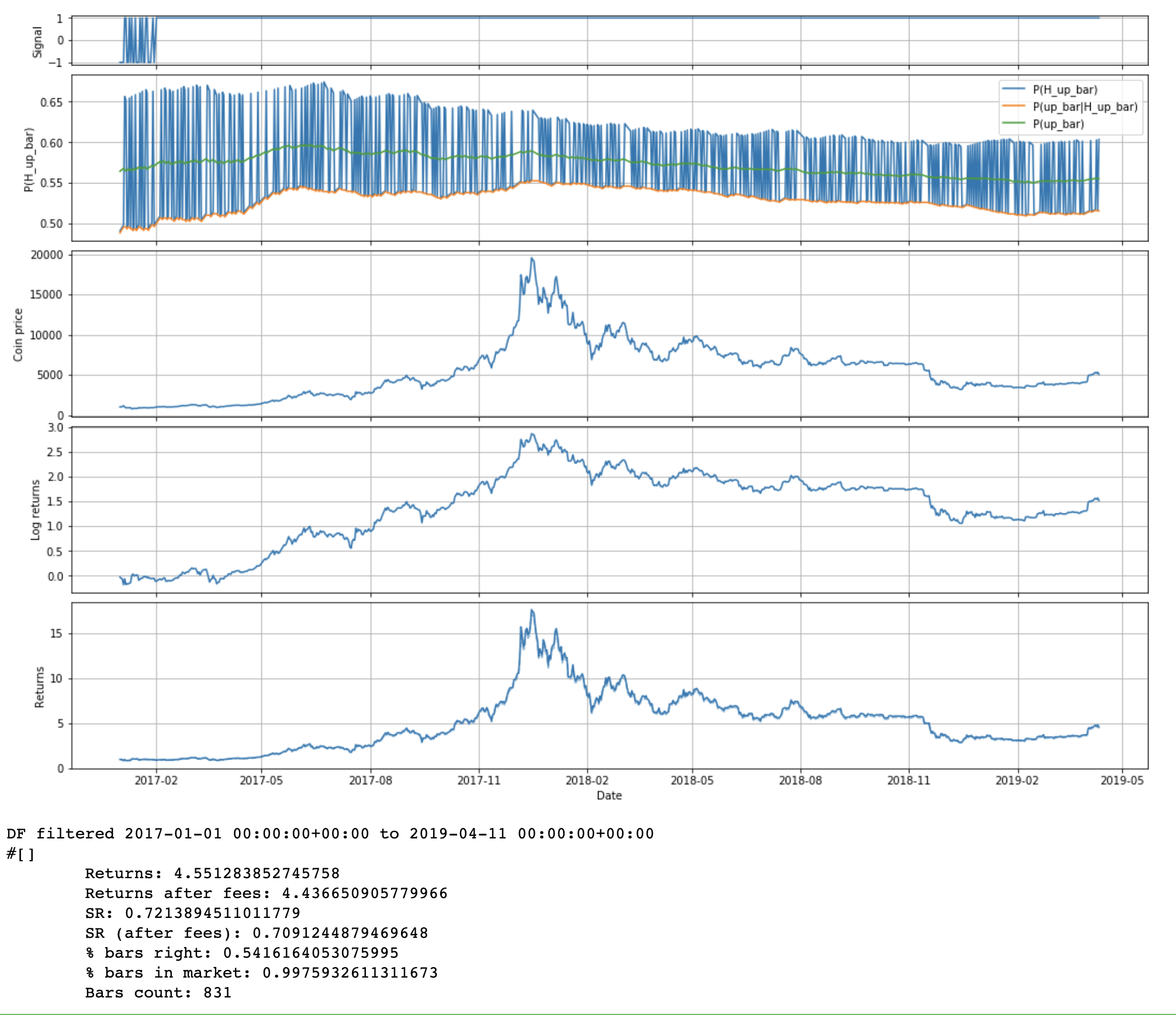 Note that even though we're graphing only 2017 onwards, we're updating on all the data prior to that too. Since 2016 and 2017 have been so bullish, we've basically learned to expect up bars under either condition. I guess HODLers were right after all.

So, this approach is a bit suboptimal if we want to try to catch short term moves (like entire 2018). Instead, let's try to look at most recent data. (Question: does anyone know of Bayes-like method that weighs recent data more?)

We slightly modify our algorithm to only look at and update on the past N days of data. 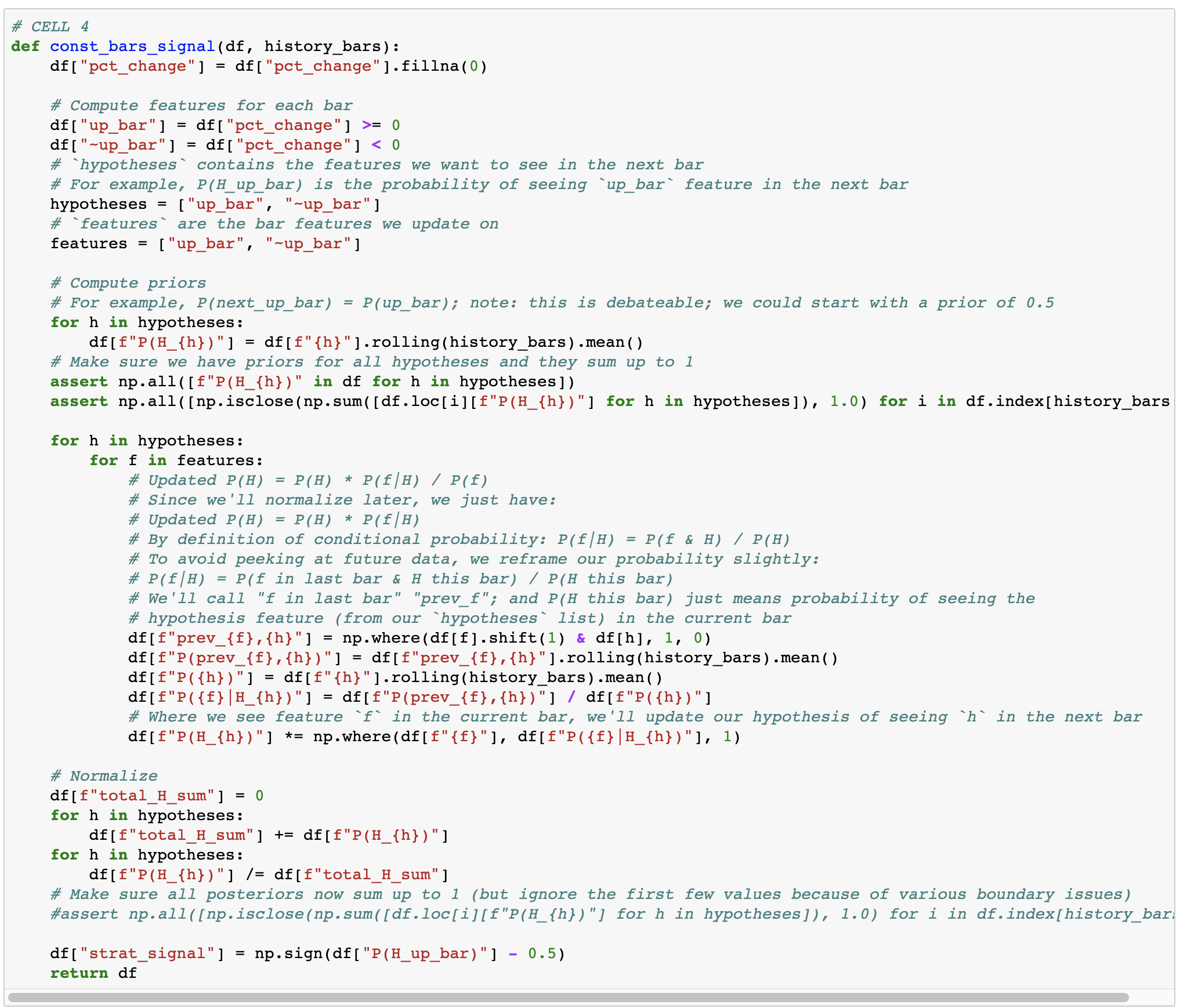 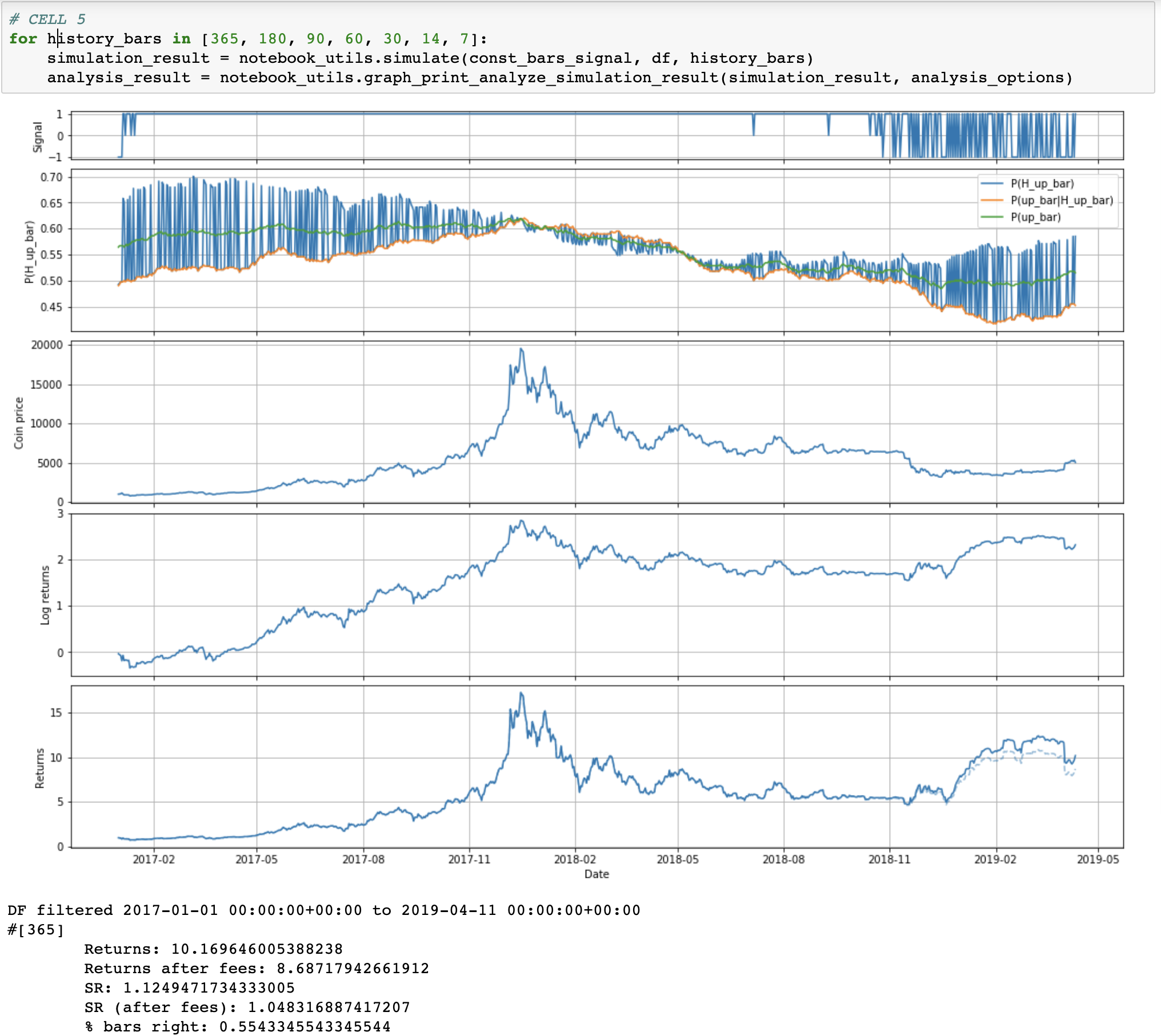 It's interesting to see that it still takes a while for the algorithm to catch up to the fact that the bull market is over. Just in time to not totally get crushed by the November 2018 drop.
In the notebook I'm also looking at shorter terms. There are some interesting results there, but I'm not going to post all the pictures here, since that would take too long.

As we look at shorter and shorter timeframes, we are increasingly likely to run into a timeframe where there are only up bars (or only down bars) in our history. Then P(up)=1, which doesn't allow us to update. (Some conditional probabilities get messed up too.) That's why we had to disable the posterior assert in the last code cell. Currently we just don't trade during those times, but we could instead assume that we've always seen at least one up and one down bar. (And, likewise, for all features.) 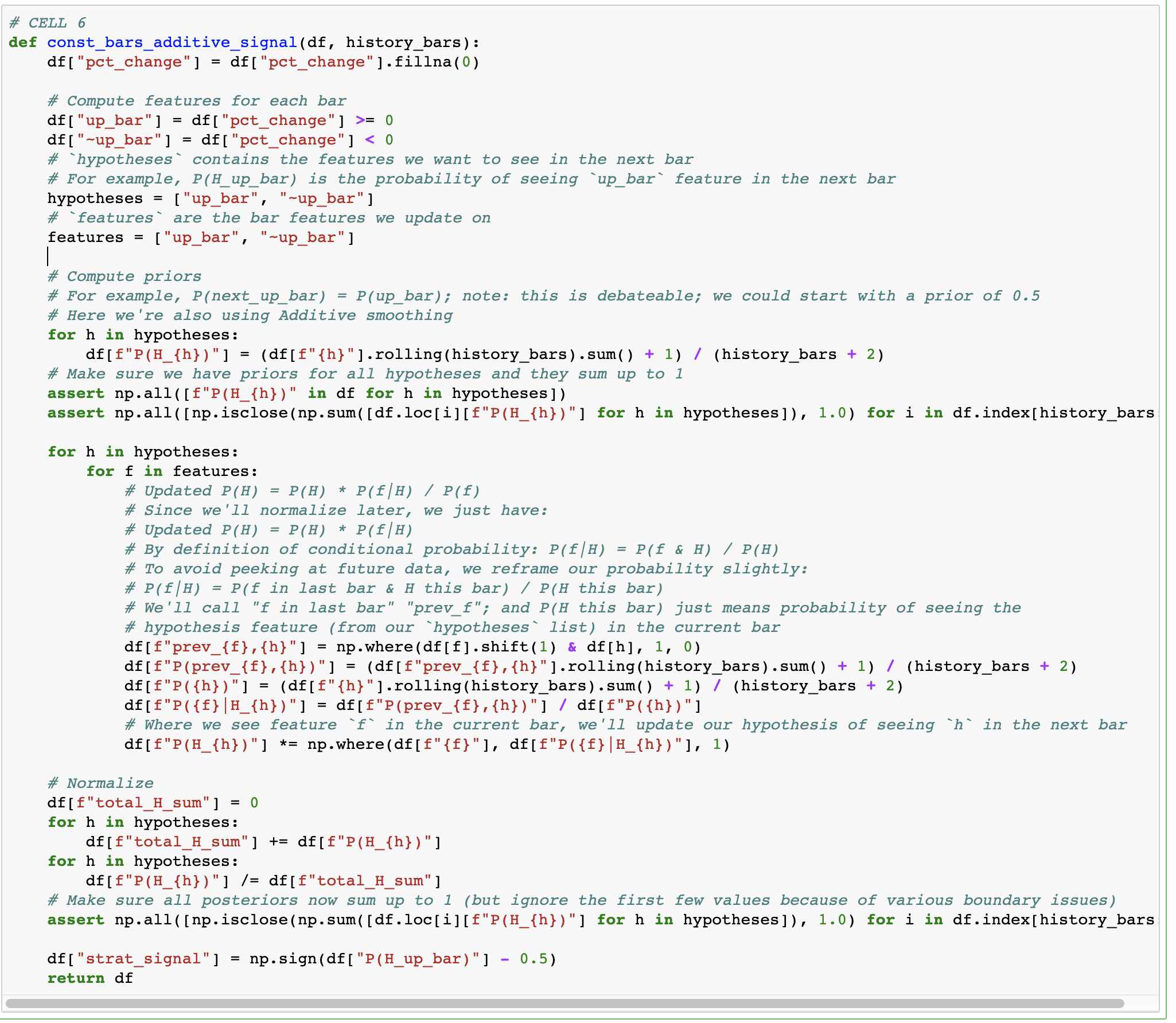 The results are not different for longer timeframes (as we'd expect), and mostly the same for shorter timeframes. We can reenable our posterior assert too.

Currently we're betting our entire portfolio each bar. But in theory, our bet should probably be proportional to how confident we are. You could in theory use Kelly criterion, but you'd need to have an estimate of the size of the next bar. So for now we'll just try linear scaling: df["strat_signal"] = 2 * (df["P(H_up_bar)"] - 0.5) 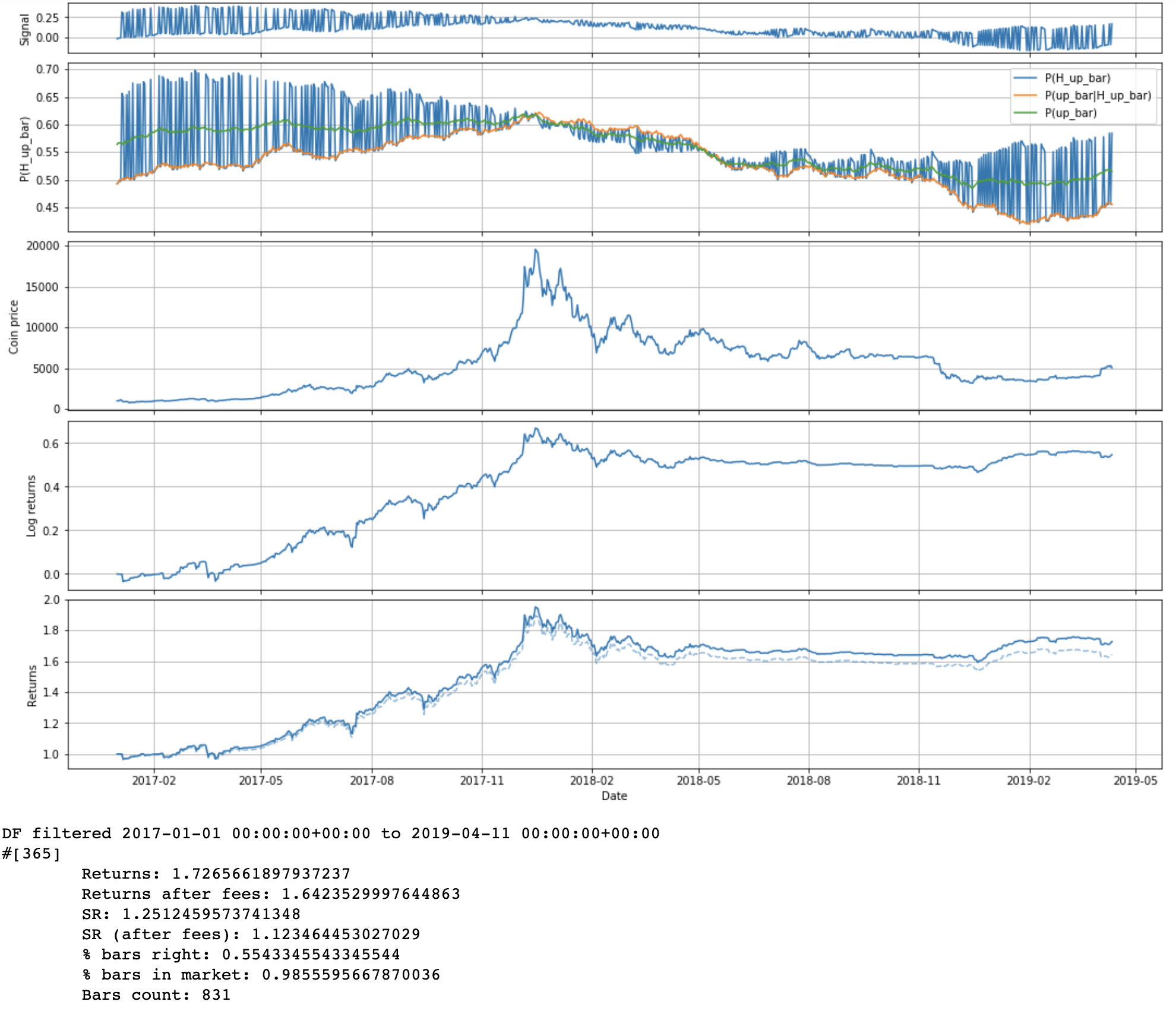 We get lower returns, but slightly higher SR.

Currently we're computing the prior for P(next bar is up) by assuming that it'll essentially draw from the same distribution as the last N bars. We could also say that we just don't know! The market is really clever, and on priors we just shouldn't assume we know anything: P(next bar is up) = 50%. 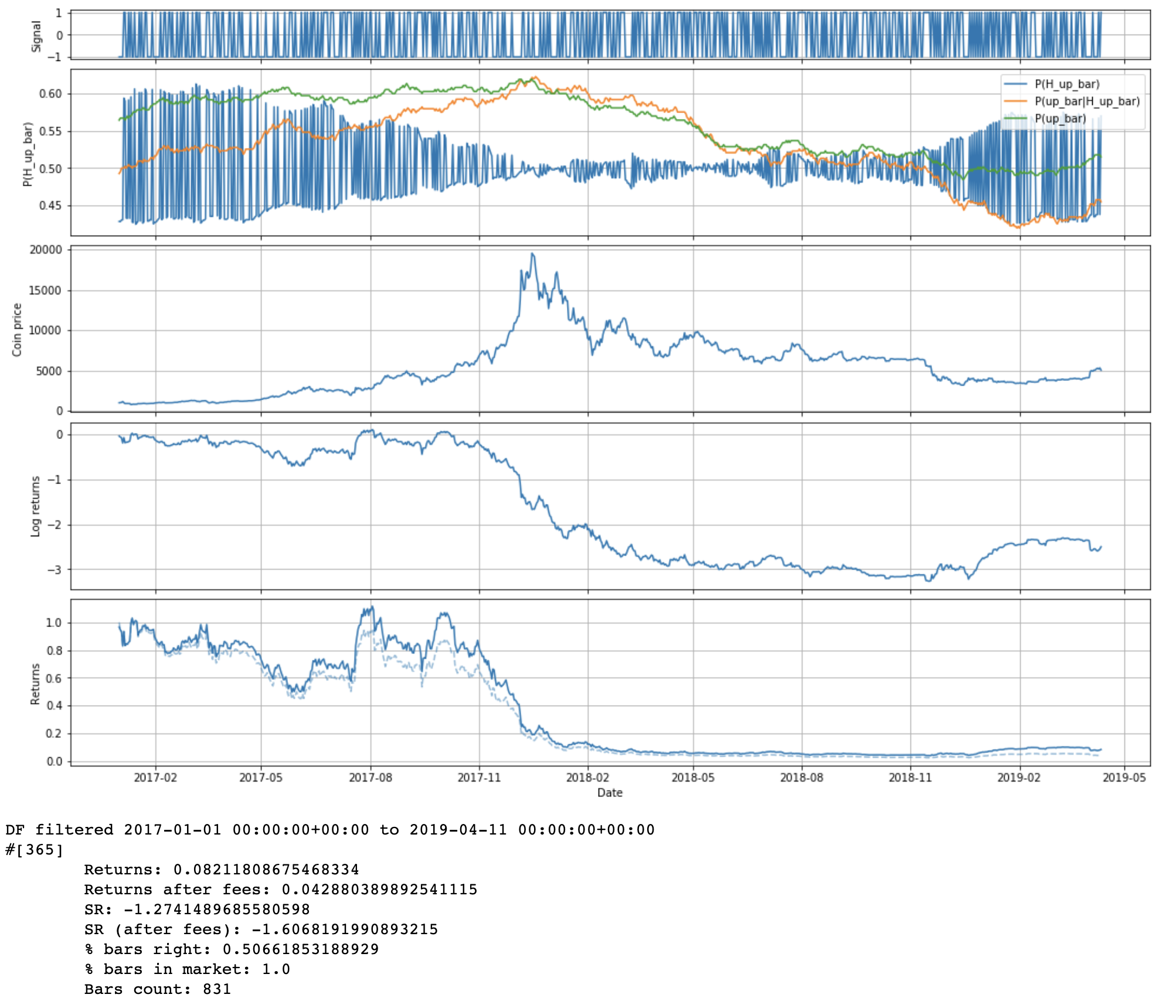 Wow, that does significantly worse. I guess our priors are pretty good.

Putting it all together with multiple features 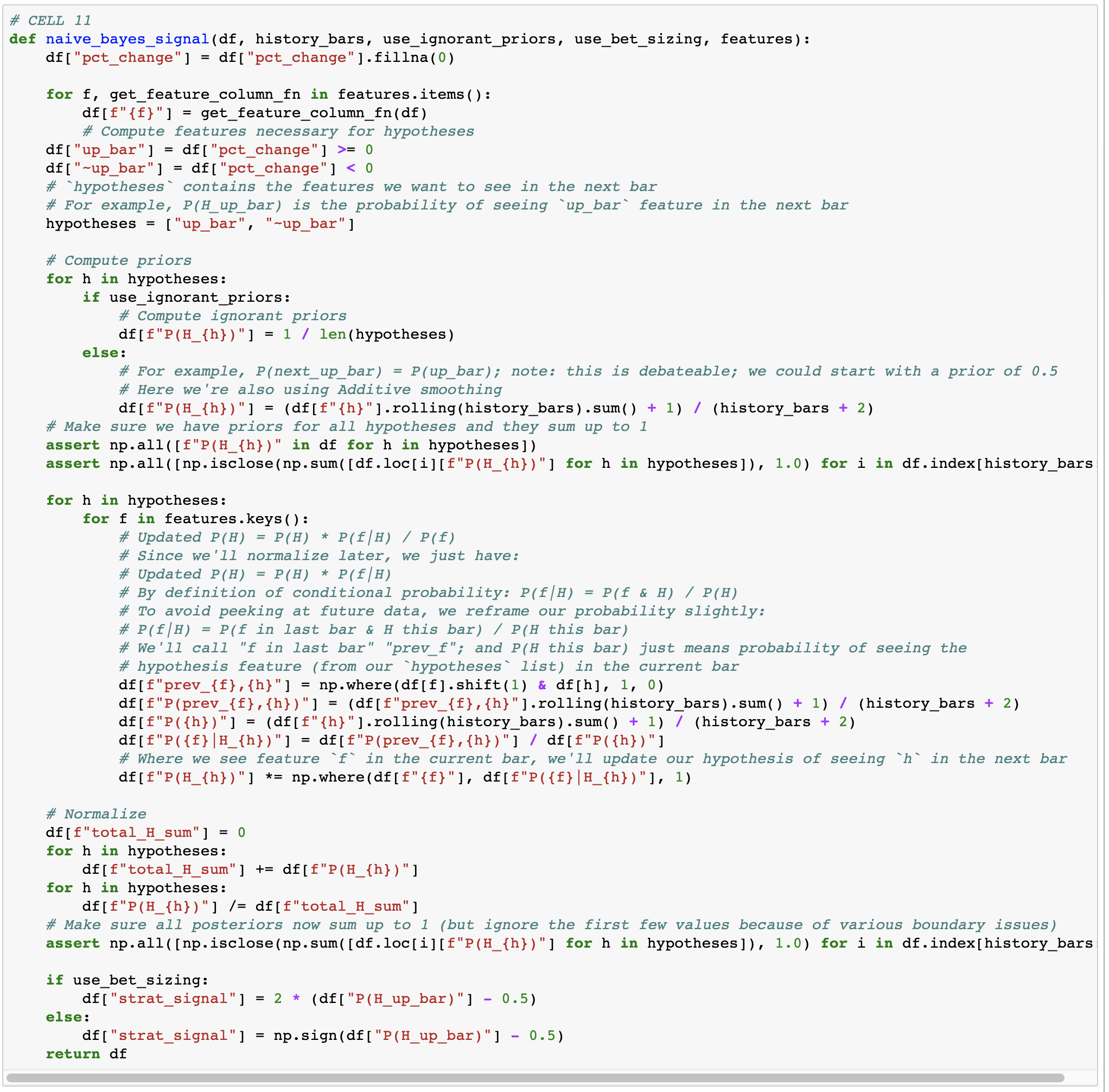 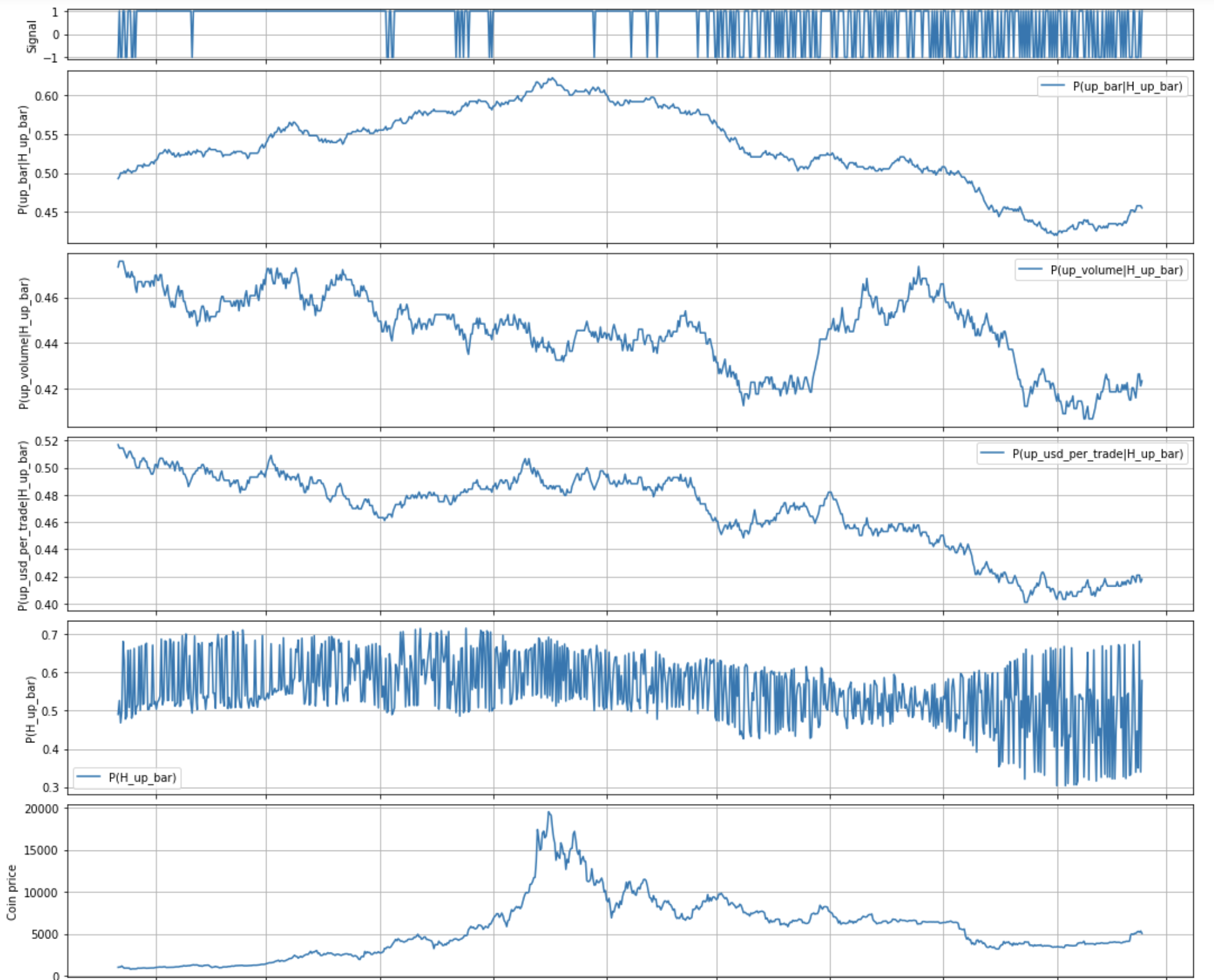 It seems like at the end of a fairly complicated construction process that if you wind up with a model that outperforms, your prior should be that you managed to sneak in overfitting without realizing it rather than that you actually have an edge right? Even if, say, you wound up with something that seemed safe because it had low variance in the short run, you'd suspect that you had managed to push the variance out into the tails. How would you determine how much testing would be needed before you were confident placing bets of appreciable size? I'm guessing there's stuff related to structuring your stop losses here I don't know about.

Yes, avoiding overfitting is the key problem, and you should expect almost anything to be overfit by default. We spend a lot of time on this (I work w/Alexei). I'm thinking of writing a longer post on preventing overfitting, but these are some key parts:

I'd be interested to learn more about the "components" part.

As an example, consider a strategy like "on Wednesdays, the market is more likely to have a large move, and signal XYZ predicts big moves accurately." You can encode that as an algorithm: trade signal XYZ on Wednesdays. But the algorithm might make money on backtests even if the assumptions are wrong! By examining the individual components rather than just whether the algorithm made money, we get a better idea of whether the strategy works.

It's a combination. The point is to throw out algorithms/parameters that do well on backtests when the assumptions are violated, because those are much more likely to be overfit.

Yes to everything Satvik said, plus: it helps if you've tested the algorithm across multiple different market conditions. E.g. in this case we've looked at 2017 and 2018 and 2019, each having a pretty different market regime. (For other assets you might have 10+ years of data, which makes it easier to be more confident in your findings since there are more crashes + weird market regimes + underlying assumptions changing.)

But you're also getting at an important point I was hinting at in my homework question:

We're predicting up bars, but what we ultimately want is returns. What assumptions are we making? What should we consider instead?

Basically, it's possible that we predict the sign of the bar with a 99% accuracy, but still lose money. This would happen if every time we get the prediction right the price movement is relatively small, but every time we get it wrong, the price moves a lot and we lose money.
Stop losses can help. Another way to mitigate this is to run a lot of uncorrelated strategies. Then even if the market conditions becomes particularly adversarial for one of your algorithms, you won't lose too much money because other algorithms will continue to perform well: https://www.youtube.com/watch?v=Nu4lHaSh7D4

That sounds equivalent to kelly criterion, that most of your bankroll is in a low variance strategy and some proportion of your bankroll is spread across strategies with varying amounts of higher variance. Is there any existing work on kelly optimization over distributions rather than points?

edit: full kelly allows you to get up to 6 outcomes before you're in 5th degree polynomial land which is no fun. So I guess you need to choose your points well. http://www.elem.com/~btilly/kelly-criterion/

I've read over briefly both this article and the previous one in the series. Thank you for putting these together!

What I'm curious about in quant trading is the actual implementation. Once you, say, have a model which you think works, how important is latency? How do you make decisions about when to buy / sell? (Partially echoing Romeo's sentiment about curiosity around stop losses and the actual nitty-gritty of extracting value after you think you've figured something out.)

In this case the latency is not a big issue because you're trading on day bars. So if it takes you a few minutes to get into the position, that seems fine. (But that's something you'd want to measure and track.)
In these strategies you'd be holding a position every bar (long or short). So at the end of the day, once the day bar closes, you'd compute your signal for the next day and then enter that position. If you're going to do stop-losses that's something you'd want to backtest before implementing.

Overall, you'll want to start trading some amount of capital (may be 0, which is called paper trading) using any new strategy and track its performance relative to your backtest results + live results. A discrepancy with backtest results might suggest overfit (most likely) or market conditions changing. Discrepancy with live results might be a result of order latency, slippage, or other factors you haven't accounted for.

I see. Thanks for providing the additional info!