Imagine a high-capacity air filter that is extremely quiet and doesn't get in the way. I think I see how to build one; here's a prototype: 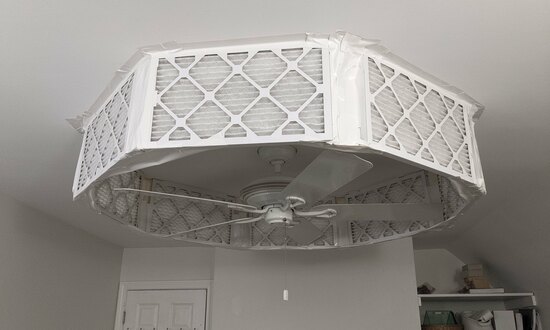 By putting a fan on the ceiling you can have very long blades. This is important for keeping noise down: the longer your blades are the more air you move at a given rotational velocity, which is a major determinant of noise. Testing my prototype, it has a CADR of ~180 CFM and is only 33dB. By contrast, the Wirecutter's top-recommended air purifier (Coway AP-1512HH) has a CADR of 233 CFM (31% higher) at 54 dB (21dB louder) or 110 CFM (38% lower) at 36 dB (3dB louder). With some tweaks it should be able to match the commercial purifier's performance, without being louder.

Volume is very important here: people often select purifiers based on their maximum flow, but then run them on a lower setting or even turn them off because they are too loud. 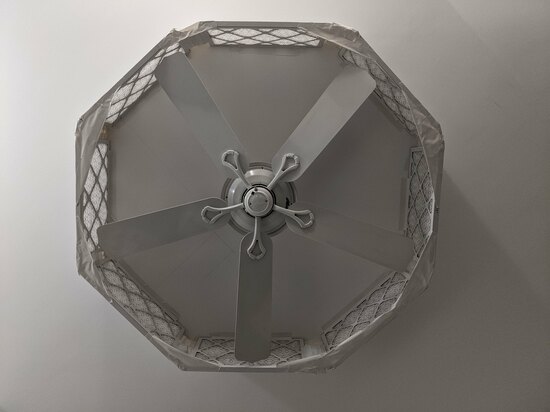 Note that while my purifier is an octagon of 12x20 filters around a 52" fan, a nonagon would have been better. Not only should that get you 12% more filtration, but you don't have to fill gaps between the filters. 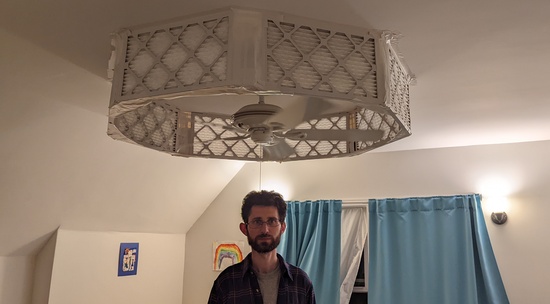 One downside of using this much tape, especially some of it with the sticky side bare, is that you get an adhesive smell. The smell fell below where I could detect after about a day, but Julia could still smell it for about five days.

To determine the CADR of the prototype I followed the approach I described in Testing Air Purifiers, where I created smoke by burning matches and then tracked how quickly the purifier could reduce pm2.5 levels: 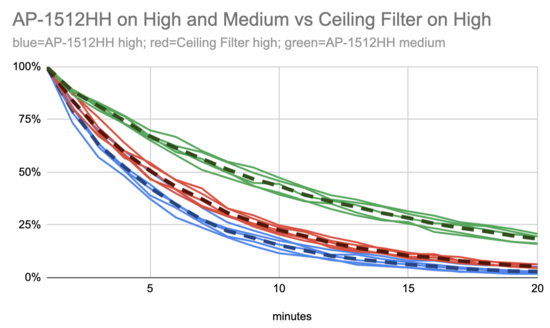 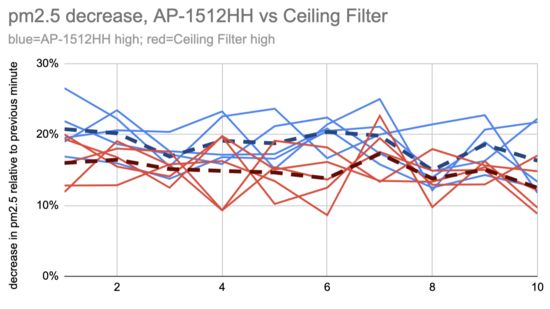 To determine volume levels, I used a Sennheiser 835s dynamic microphone with a foam windscreen, connected to an AudioBox 1818VSL to record samples of each purifier option and silence. Here are the samples: 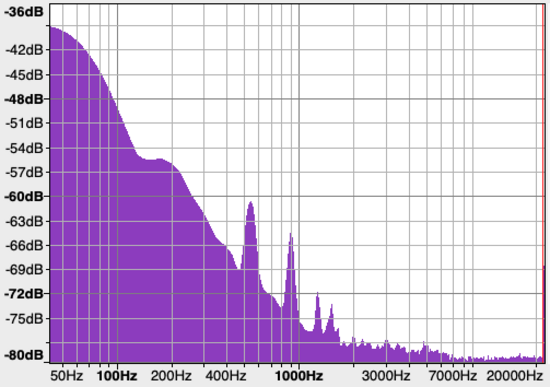 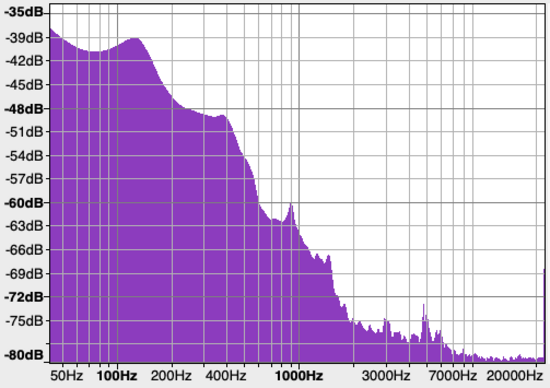 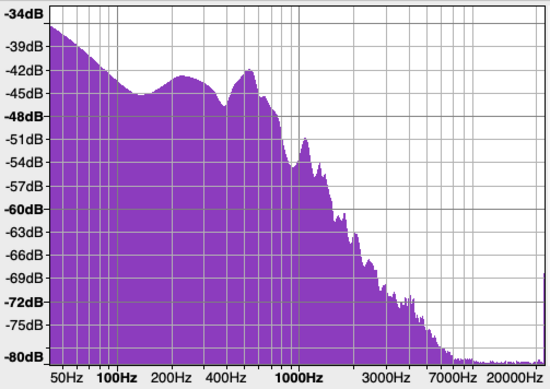 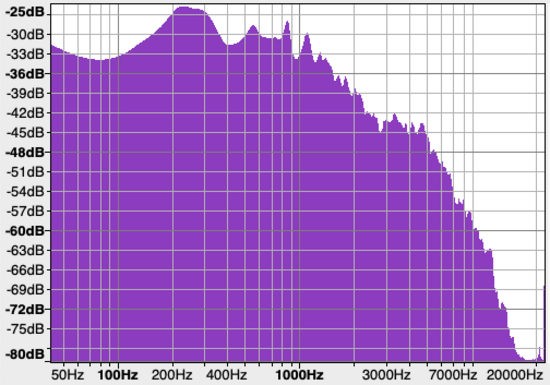 To compute the loudness of each sample I ran:

This gives loudness in LUFS, which is K-weighted dB. I don't have any calibrated tooling, but I can report values in loudness units (LU) relative to silence. Trusting the manufacturer's rating of 53.8 dB for the AP-1512HH on High, however, lets us determine absolute loudness for the other options:

I think it ought to be possible to get even better performance out of the ceiling purifier by building a shroud. The ideal shroud is generally quite a bit narrower than I would guess: I've seen people measuring peak performance with only a 14" hole for a 20" fan. They report ~40% more airflow without increased noise, but I would want to run tests and verify that here.

With ~12% improvement from switching to nine filters and ~40% from better shrouding, this ought to get us from a CADR of ~180 CFM to ~280 CFM. Even if we only get half that improvement, a CADR ~230 CFM gets us even with the commercial purifier, at far lower volumes.

In terms of cost, materials for one fan are nine MERV-14 filters for $110 plus ~$5 for tape. The ceiling fan was a Hunter Mariner 52", which seems to cost $106 now, though it's not something I installed for this project. A real-product version of this would replace the tape with a frame you attach to the ceiling, into which you could slide filters. Maybe $100? If someone wanted to build and sell something I'd be pretty happy to see that!

I'm curious if the ceiling fan is reversible, and if so if you tried it blowing up. That would give you something of a pressurized plenum approach and may more evenly mix the air.

You would need to turn the filters around, which would, in this prototype, require taking everything apart and retaping.

I would also expect this to cause the air to sweep out a smaller arc, because the exhaust velocity would be so much lower.

Any chance you could add in a negative control into this data? Fantastic work building something physical. I also think the purifier looks more attractive than the bare fan.

I have one or two "control" runs, but I should take more to understand the variability.

I'm also worried that it may depend on things like "how strong is the wind today".

I didn't get around to more control runs yet, but here's what I have: 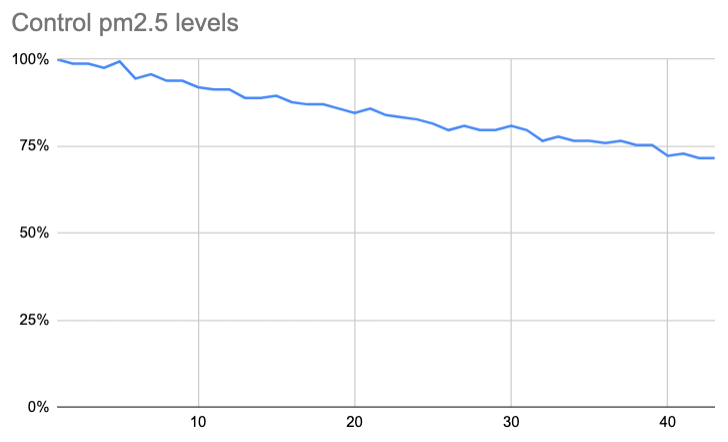 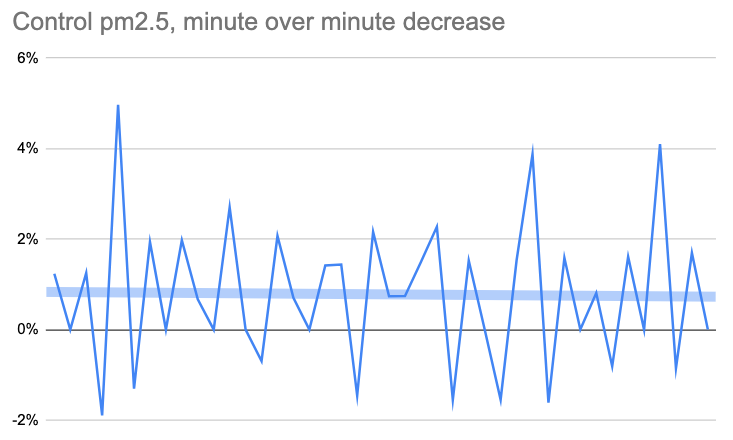 I wonder where one would buy large quantities of thin aluminum c-channel of a dimension suitable for holding filters. With a hacksaw and miter box, it would be straightforward to construct frames for your preferred size of filter. Then the frames could be taped together, instead of taping the filters themselves, constructing basically the thing you would like to buy. Some enterprising individual with a band saw and drill press could make custom filter frame kits if people use varying sizes of filter.

Did you choose the filter size in this project based on cost efficiency, or for compatibility with other appliances in your home, or based on some other metric? When I do things with filters, I like using the same size that my HVAC takes, because then any extras can go in the whole-house fan rather than risking them going to waste. I assume that others might choose filters the same way, but I realize that I've never actually asked. This seems to matter because if everyone uses the same size filters and fans, mass producing the frame kits would make sense, but if folks want to retrofit existing fans with filters that match their other home applications, custom building kits would likely be preferable.

I chose 12" because that's how far my fan blades are from the ceiling and I didn't want to lose headroom. I chose 12x20 because that seemed to be the cheapest size per area for 12" merv-14 filters.

Something like this https://www.metalsdepot.com/aluminum-products/aluminum-channel-6063? 1/16" is perhaps overkill for this type of application -- but then perhaps having it provide some structural strength is a good thing.

The other option would be make a drawing and then go talk with a local HVAC company to see if they make their own custom duct work or if they have a supplier they will introduce you to.