Our Tundra is an inhospitable[1] environment. The only significant food available to herbivores is Lichen, which has a tiny nutritional value of 1. The Tundra is cold too. Staying warm requires the cold tolerance adaptation, which costs +2 size. 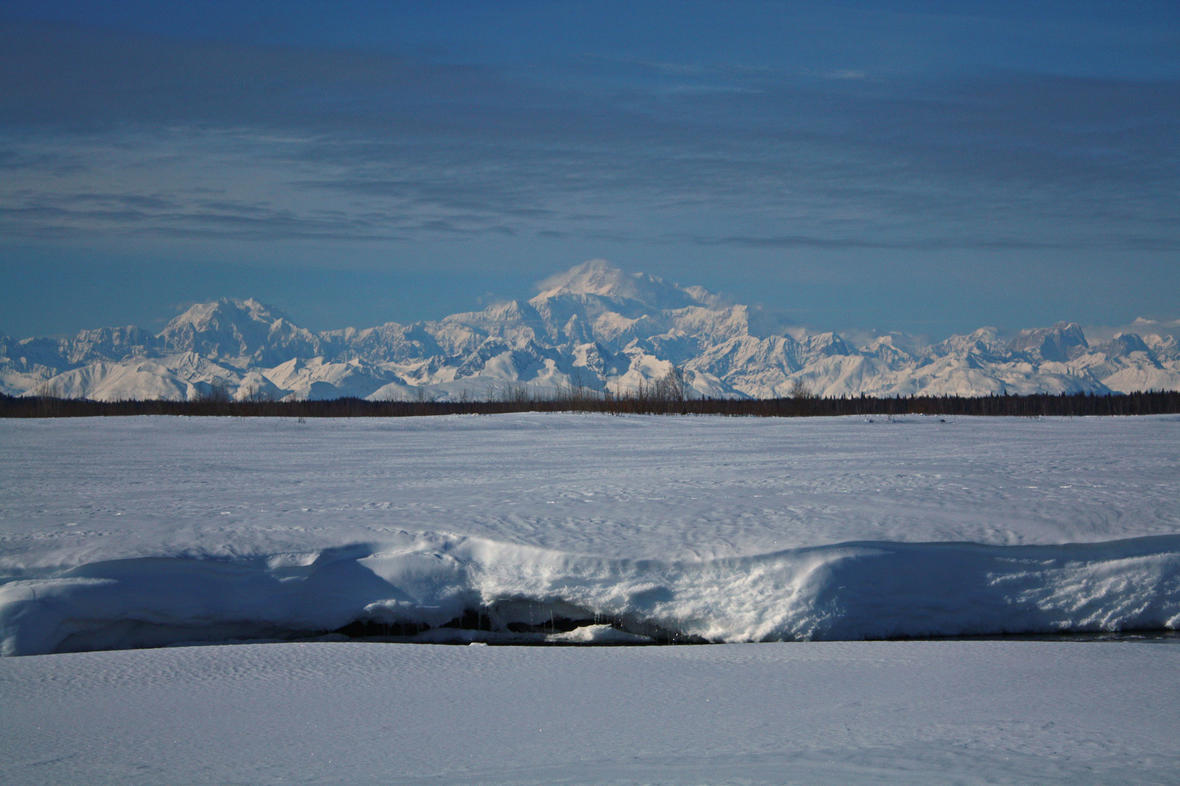 An organism must expend 20% of its energy just to survive. A herbivore foraging for lichen cannot have a size greater than 5 or else it will expend more energy in metabolism than it is possible to acquire from eating Lichen.

All organisms have base size 0.1. The cold adaptation (+2) plus the Lichen digestive tract (+1) costs a total of +3 size. A Tundra herbivore has a minimum size of 3.1. A herbivore with size 5.1 is untenable since it expends more energy (1.02) than is possible to obtain from Lichen (1.00).

Players submitted 39 species native to the Tundra. Only 4 of them were viable herbivores: Micropas, Arctic Slug, Northern Nibbler and "lichen" (not to be confused with the foragable "Lichen"). (Multicore's Arctic Fox was a carnivore.)

These species could support little in the way of weapons, armor and speed. They were defenseless. In the first 8 turns, all four of our viable foragers are eaten to extinction. 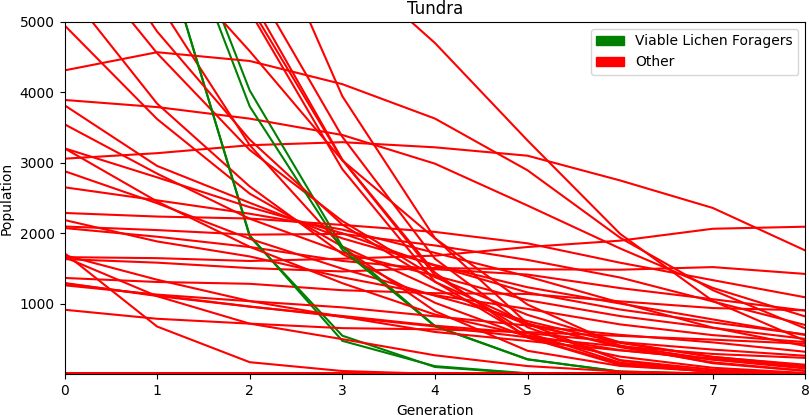 After the viable herbivores were eliminated, total ecological collapse was inevitable. 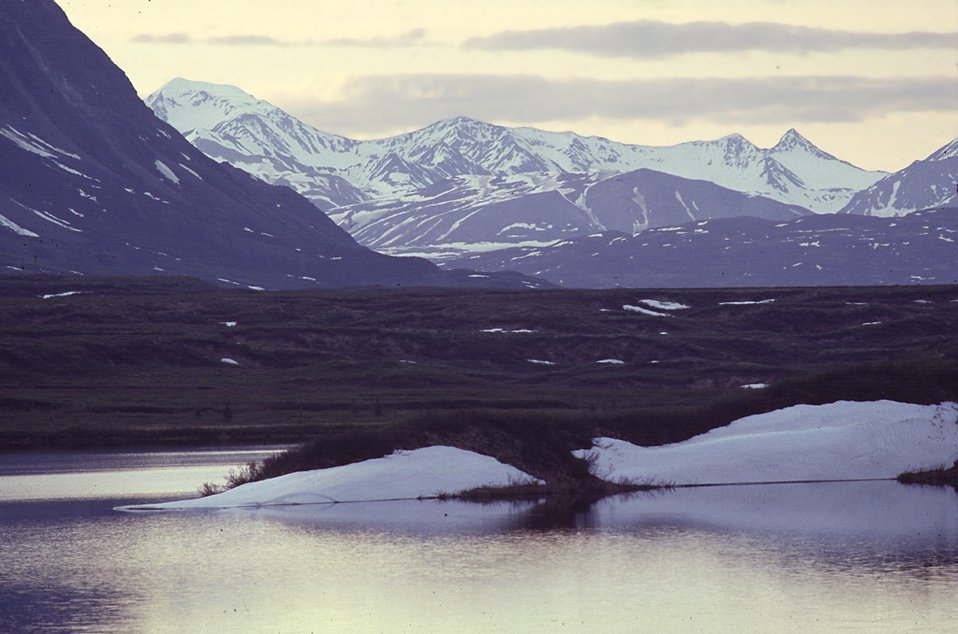 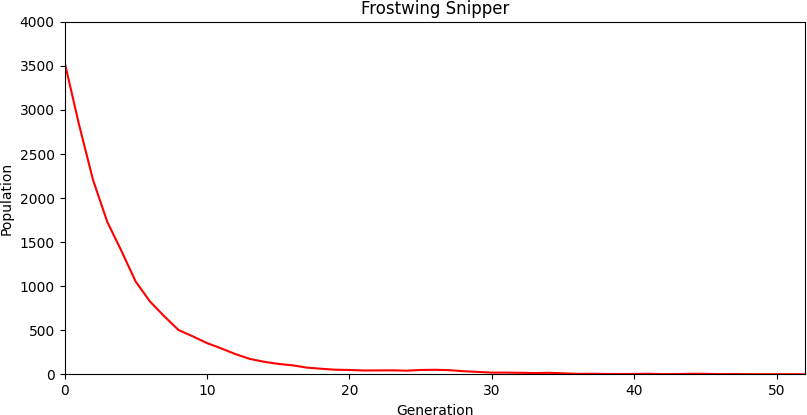 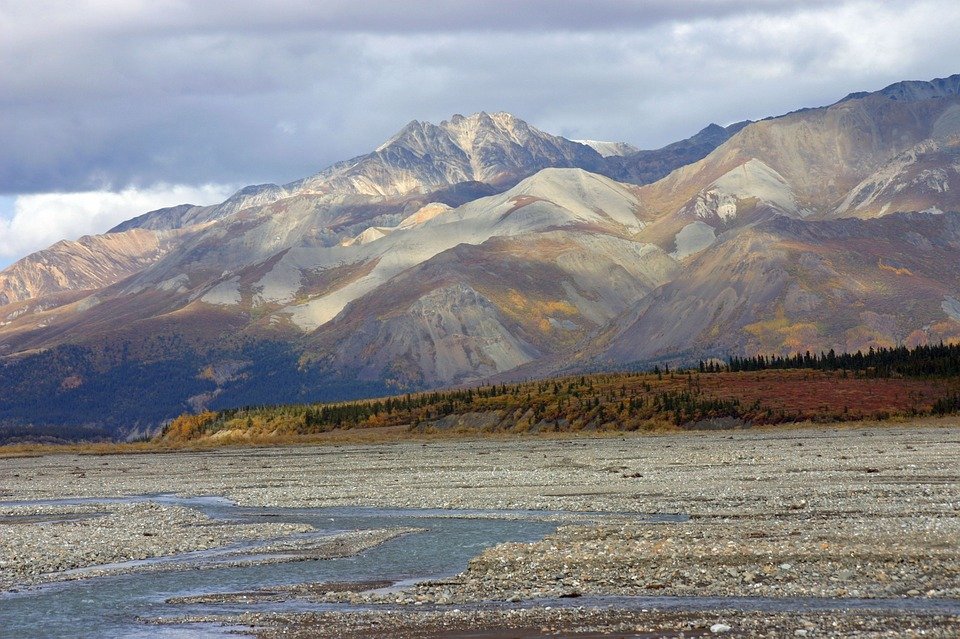 Simon notes that I used 50,000 instead of 1,000 for each species initial energy. Using the correct value of 1,000 doesn't really change anything except everyone dies faster and MatIsk's Porostozer Mamuci (which eats Carrion) takes the place of Frostwing Snipper.

I am very excited that the Frostwing Snipper did so well. I hope that one of them migrated and lived a good life in the Grassland. Thanks for putting this together Isusr. It's been a lot of fun.

I wonder if the Tundra would have been more viable with more algae-eaters.

Hrm, according to my notes I should have submitted a

herbivore, but it is not on the list of viable herbivores. Maybe I changed my mind and submitted something else?

From what I remember, an organism like that is technically viable even if it has 5.1 size by adding a point of e.g. weapons, right? If there was no competition, then one of it would eat the seeds, getting 72 entries into a 1.96% lottery, and N-1 of it would eat lichen, getting 48 entries into a 1.96% lottery, yielding an equilibrium population of 8 organisms, which might be large enough to avoid randomly fluctuating to zero. Or did I get the mechanics wrong?

According to my data, GuySrinivasan submitted SmolFire to the Tundra instead of LivingTrenchcoat. It has 2 weapons, 0 armor and 0 speed. Eats Seeds and Lichen.

Your organism is technically viable, contrary to what I wrote in the post. However, it has a very small carrying capacity (though not quite as small as the Frostwing Snipper) and its lack of both defense and predatory ability got it annihilated in the initial feeding frenzy.

Thanks for looking! I am satisfied that the smol thing was viable. :D

It looks like that would have been eaten in the initial feeding frenzy?

Oh yeah definitely but I was wondering why its name didn't appear - that I forgot I changed it, or that it actually isn't viable, or both.

I take it then that no one else had a cold adaptation and wandered in from elsewhere later.

No species did that and got established.

Which random factors caused the frostwing snippers to die out? Them migrating out? Competitors or predators migrating in? Or is there some chance of not getting the seed, even if they're the only species left? I didn't get a good look at the source code, but I thought things were fairly deterministic once only one species was left.

IIRC every non-eaten organism gets 80% of its size, plus its nutrition, x10, in lottery tickets. Every lottery ticket has a 1/size/10 of being a new organism in the next generation.

The number of babies an organism has a random element. If it eats enough to replace itself then it will replace itself once in average but might do so zero or multiple times on average.

Migration is random too so there's a small chance of it migrating away too. The frosting snippers mostly needn't worry about invaders thanks to the heat.

A species will always get the seed if it is the only species left.

(That also seems like a very large starting number, and makes me worry that even in more viable biomes there's going to be a huge population crash.)

Yeah, that seems crazy high, with only ~300 resources to fight over. If there were a steady state, you'd expect ~300 herbivores and fewer carnivores, across all species.

It's also not the energy budget in the code I downloaded (which was 1000, and even that might be pretty high in tundra given the number of entrants and available resources).

Thanks for noticing. This post tool a long time to write and basically the same thing happened (except faster) with 1,000 so I'm not going to re-write this whole post. The same goes for the Desert, which I have already written up too. I will use the correct value of 1,000 for the rest of the biomes.

Wait, are you initializing and running each biome separately? I expected all biomes to be seeded at once with the complete set of submitted organisms.

They're all run simultaneously. I'm just writing up each biome separately.