According to Eliezar Yudkowsky, your thoughts should reflect reality. According to Paul Graham, the most successful people are slightly overconfident. C.C. embraces the contradiction head-on in Code Geass: Lelouch of the Re;surrection. 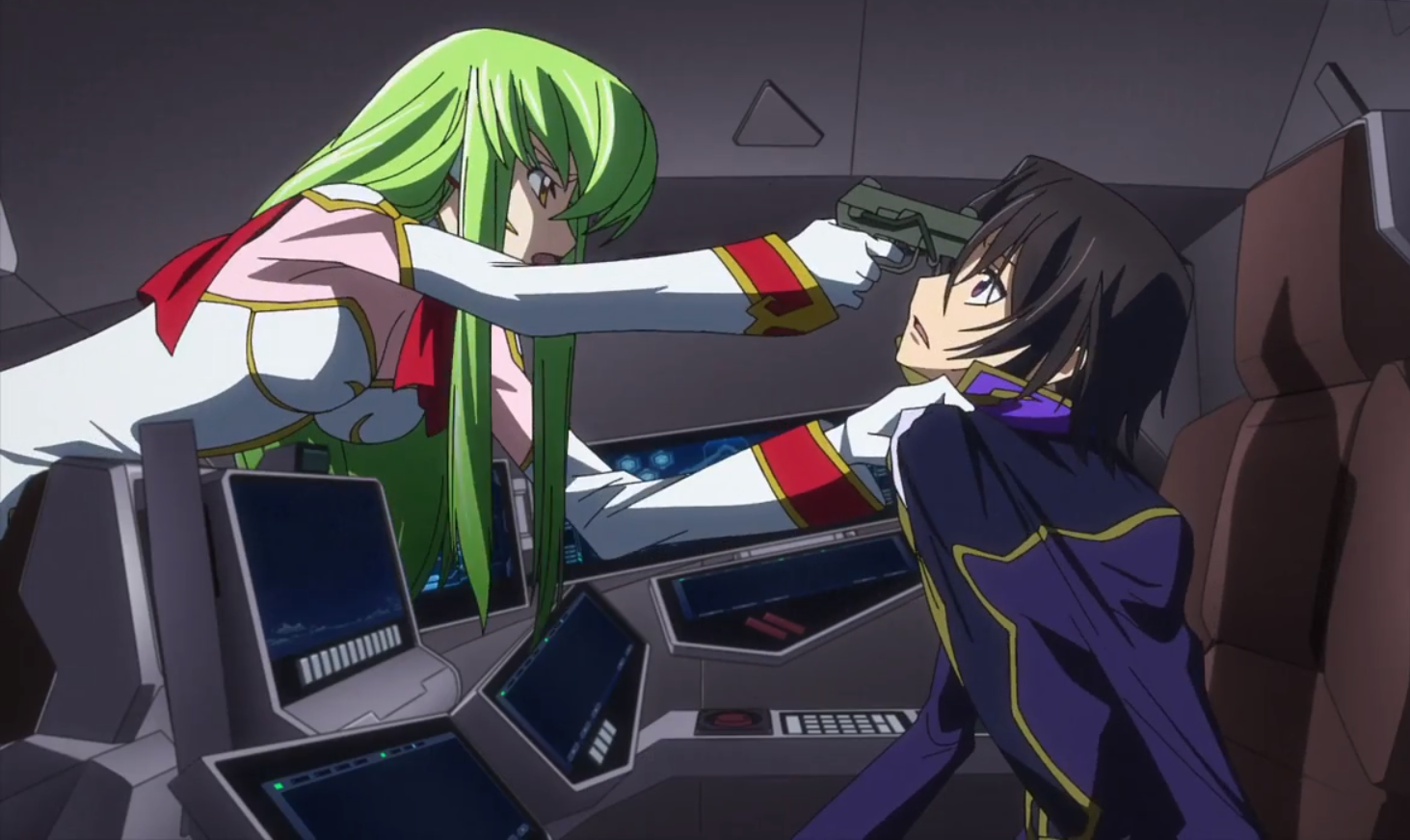 Lelouch: "Under the circumstances…"

C.C.: "I was the same way. I was desperate, journeying in search of even a pinhole of light. But even so, I never gave up. I was sure that someday, I would bring you back, all that time. And now… This isn't the you that I wanted to get back! I wanted the pompous, egotistical, overconfident one. The Lelouch who never, at any time, gave up."

Lelouch: "What a self-centered woman you are. All right, C.C.. This enemy possesses a Geass."

Lelouch: "It's my hypothesis."

―Code Geass: Lelouch of the Re;surrection

Other people—especially women—love me when I'm a cocky arrogant megalomaniac. I love me too. What is going on? Nobody likes phonies. Shouldn't people prefer the company of others whose confidence is well-calibrated?

Half of the equation is I'm an anomalously capable person. I've been on the international news for my inventions. I've taught myself more skills than I can keep track of. When you combine enough competence with enough confidence, the drawbacks of slight overconfidence (like arriving late to an airport) get lost in the noise.

Bill [Gates] was as headstrong as ever. Once I flew with him to San Francisco to visit a few customers. For efficiency’s sake, we conducted separate meetings before rendezvousing back at the airport. I reached the gate several minutes before takeoff, but Bill was late as usual. They issued the final boarding call—no Bill. I was resigned to finding the next flight when he rushed up to the gate, out of breath. It was too late; the plane was already inching away from the jetway. But Bill never stopped running, through the boarding gate and into the jetway itself, with me trailing. Upon reaching the motor control panel, he did a quick scan and began pushing buttons. Then I realized what was happening: Bill was trying to move the jetway back up to the plane so we could board.

Aghast, I called out, “Don’t do that!” An airline agent rushed over; I was sure that we would both be arrested or, at the very least, escorted from the terminal. But the man said, “Sir, sir, hold on. We’ll get the plane to come back.” To my astonishment, that is exactly what happened. They returned the plane, allowed us to board, and we got home on time.

Napoleon Bonaparte. Albert Einstein. Catherine the Great. Adolf Hitler. Karl Marx. Che Guevara. Mao Zedong. Charles Darwin. George W. Bush. Barack Obama. Can you think of anyone who has changed history who wasn't a little overconfident? Steve Wozniak and Linus Torvolds—but no one nontechnical. High confidence makes you more likely to do things instead of not doing things. Extreme confidence means you never give up. It is advantageous to be friends with the kind of people who do things and never give up.

In The Matrix, Cypher talks with Neo about about nothing. In the original screenplay, the scene went differently.

Cypher: "I'm going to let you in on a little secret here. Now don't tell him I told you this, but this ain't the first time Morpheus thought he found the One."

Cypher: "You bet your ass. It keeps him going. Maybe it keeps all of us going."

Neo: "How many were there?"

Cypher: "Five. Since I've been here."

Neo: "What happened to them?"

Imagine if Morpheus had calibrated his odds properly.

Neo: "What is that supposed to mean?"

Morpheus: "If an agent shoots you, there is a 17% chance you have the potential to dodge bullets."

Morpheus: "I know what you're thinking, because right now I'm thinking the same thing. Actually, I've been thinking it ever since I got here. Why oh why didn't I take the blue pill?"

I think a common mistake on LW is to mistake emotional confidence (which comes from believing deeply internalizing emotional schemas ike (I'm capable, I'm worthy, I'm enough) with epistemic confidence "I'm 80% sure my current plan will work, I'm 70% sure about this particular fact"

That is, I think this article has causality a bit backwards. You think that being competent helps you be "overconfident". I think that your belief that you're competent IS the thing that you want.

Posts like this are correct on the emotional confidence stuff. In turn, more of them could link to Conviction without self-deception. (Or maybe the good kind of "self-deception" is less "sky is green" , and more "using Newtonian physics instead of quantum physics to build an airplane".)

I haven't read Nates post in a while, but if I remember correctly it sort of makes the same conflation between epistemic confidence and emotional confidence.

Other people—especially women—love me when I'm a cocky arrogant megalomaniac.

Maybe it just divides people? Average behaviour doesn't move the liking scale. Cocky arrogant megalomaniac behaviour makes the liking scale swing positive in some people, negative in others. And since you're in a cocky, arrogant mode, you only notice those who like you.

The airplane example illustrates it, too. I bet a good share of passengers thought, ‘what ****er is delaying the airplane now?’, whereas another share smiled about Gates' nerve.

If you get things done by making enemies, in the end you don't get much (good) done. Cf. many of the people you listed.

I think the core thesis of your comment is dead-on. Variance could explain all of my observed effects. If people label you unimportant by default then increasing variance is a good way to make friends amidst a large population.

You have enemies? Good. That means you've stood up for something, sometime in your life.

I agree, it's hard to avoid making enemies. Even harmony-seeking people annoy others who have little interest in harmony. (I'm not talking about anything Confucian here.) Then again, it's better to make enemies with discretion, and not use it as an excuse for bad behaviour.

Belief and action are different things and obey different laws. If I run for a train, the lower I think my chances, the more effort I must put in.

This reminds me of Left Brain, Right Stuff. It also has content on how overconfidence helps athletes perform something like 4% better, which is a big deal in a relative competition where small differences can make you win or lose. He then continues to find business analogies.

Can you think of anyone who has changed history who wasn't a little overconfident? Steve Wozniak and Linus Torvolds—but no one nontechnical.

Could it be that overconfidence is most important when you need other people's cooperation?

The confidence calculation in Neo's example can also be made about other people, with similar circular logic. Imagine you have an option to either support someone, in which case they have a 17% chance of huge success, or not support them, in which case (suppose they have no other option) they have a 0% chance. If they succeed to convince you that the chance is 100%, they will actually get the 17% chance; if they fail to convince you, and you decide that a 17% chance is not worth your investment, they get 0%.

And sometimes the best way to convince other people is to believe it yourself.

Nobody likes phonies. [...] When you combine enough competence with enough confidence, the drawbacks of slight overconfidence (like arriving late to an airport) get lost in the noise.

On a competence ladder, it is easy to distinguish between people who are below you or at the same level as you... but everything above you seems similar.

Which suggests that the optimal strategy depends on your level and the levels of people whom you are trying to impress. If you are at lower or same level, be honest about your abilities. If you are at higher level, pretend you are at least twice as high -- they can't tell the difference anyway.

And even if someone sees you fail, they can't know whether it is a 1:1000000 situation, or 1:10. Unless they can observe you long enough to collect enough data. But by that time, everyone knows that you are the best.

This ties in well with the Procrastination Equation. Useful overconfidence means setting your "expectancy" term really high, even outside your comfort zone or social convention/rules.